Accessibility links
Size Does Matter, At Least In The Tallest Building Debate Is One World Trade Center now the tallest building in North America, or does that distinction belong to the Willis Tower in Chicago? The Council on Tall Buildings and Urban Habitat is going to settle the debate. One thing everyone can be sure of: There's only one. 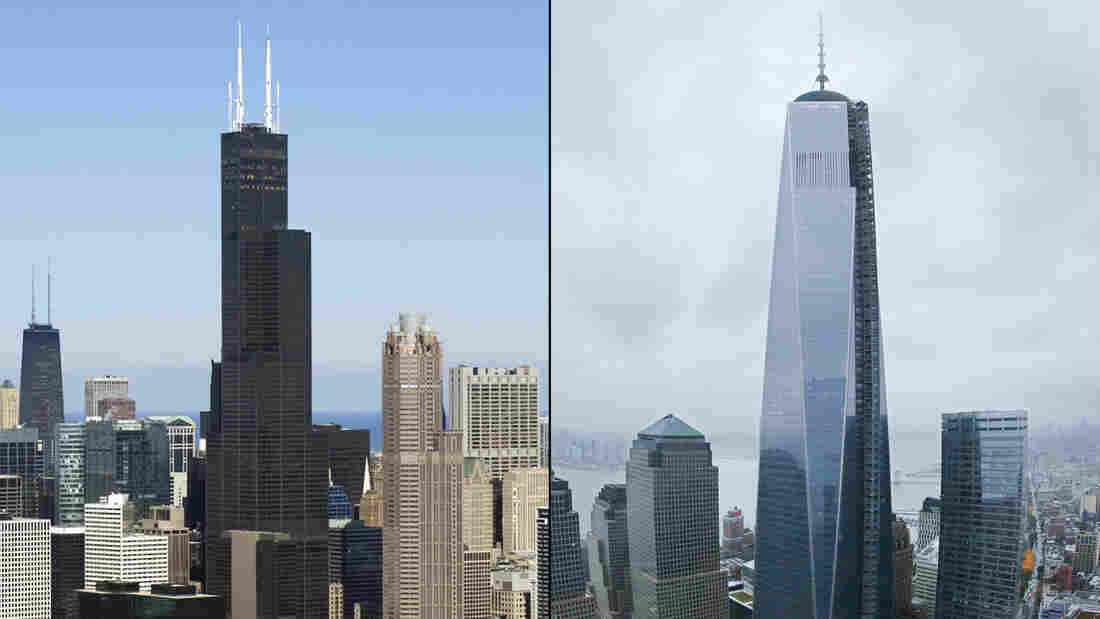 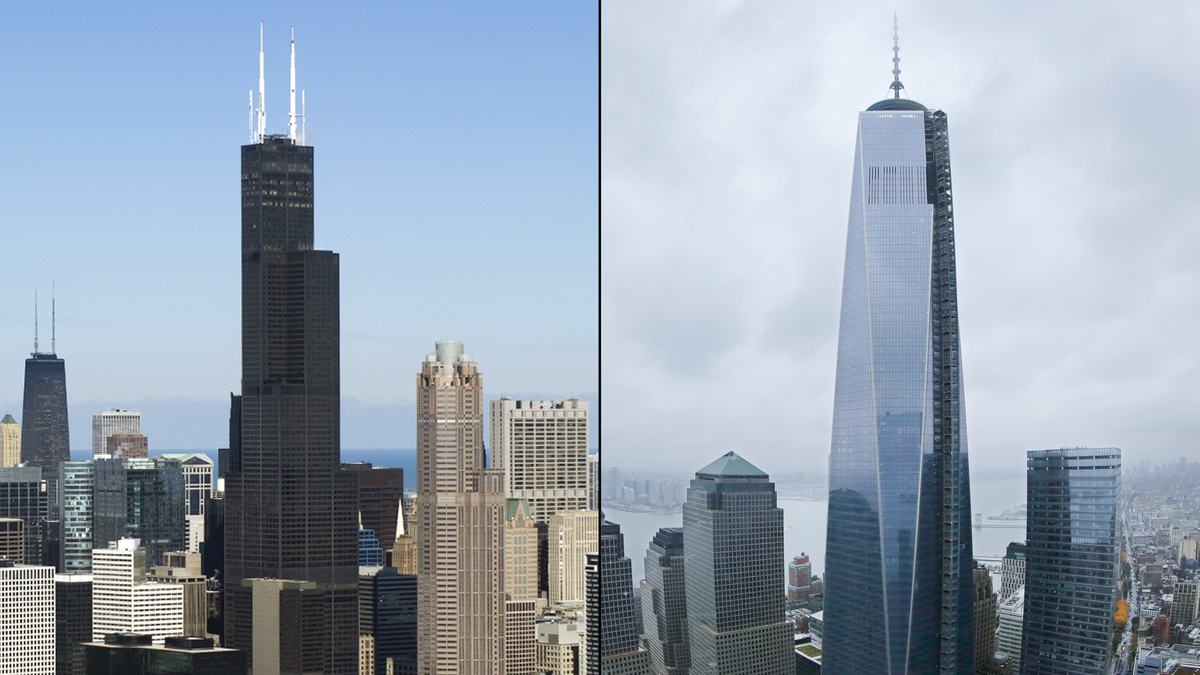 There's a question that's looming over the new skyscraper at the World Trade Center site in New York: Should it count as the tallest building in the country?

The developers say yes. But by some measures, the Willis Tower in Chicago — formerly known as Sears Tower — can still lay claim to the title.

Now, an obscure organization known as the Council on Tall Buildings and Urban Habitat is preparing to settle the debate.

"It's a seminal moment for skyscrapers," says Antony Wood, the council's executive director. "It doesn't come along every year."

The issue has been hanging over the architecture world since the spring, when construction crews hoisted a 400-foot metal mast into place at the top of One World Trade Center. As far as New Yorkers are concerned, it's now the tallest skyscraper in the hemisphere.

"It's a fact. It's taller," says Jerry Romano of New Jersey. "It doesn't matter to me. I'm just stating facts." 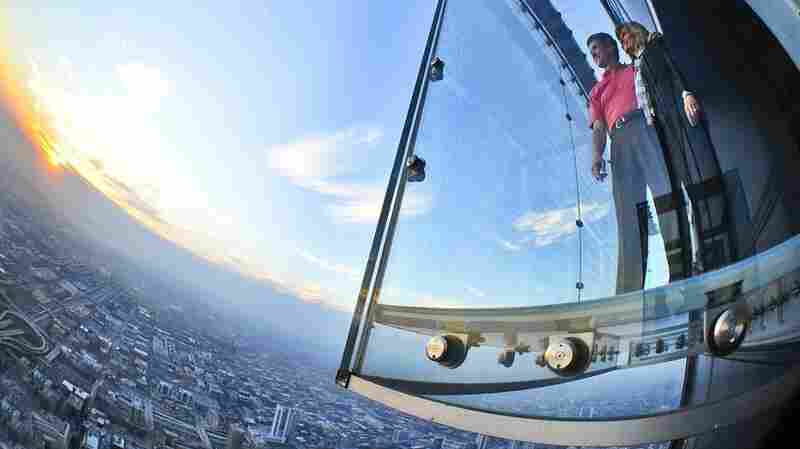 The view from the Willis Tower, formerly known as Sears Tower, in Chicago. FleishmanHillard hide caption 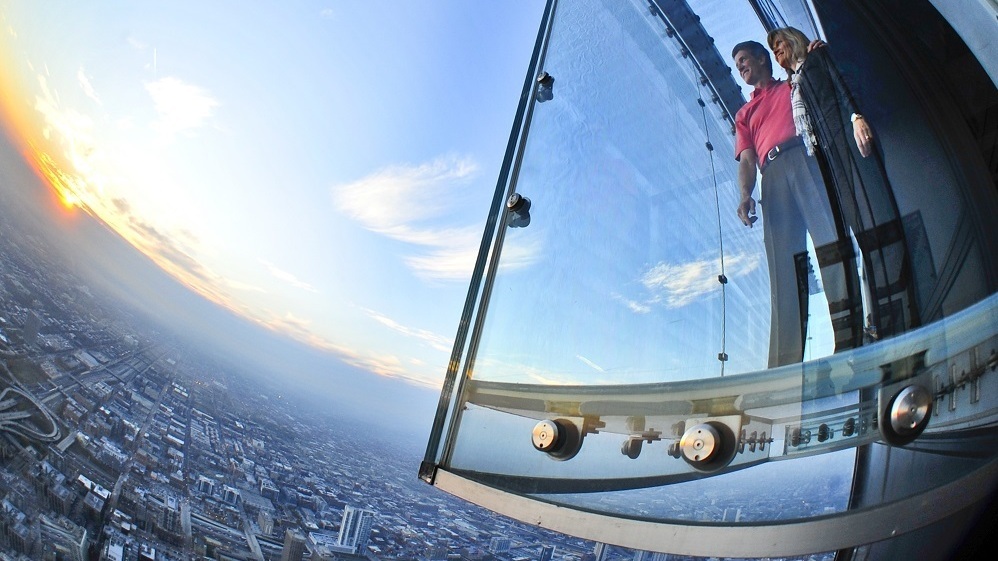 The view from the Willis Tower, formerly known as Sears Tower, in Chicago.

Veronica Smalls of Harlem agrees. "It has to be the tallest," she says.

"Not one of the tallest," interrupts her friend Tyreek Jones of Brooklyn, " 'cause New York City needs to be known as No. 1."

"We're standing on a sheet of glass, looking 1,353 feet straight down to the street," says Bob Wislow, standing on a ledge extending out from the sky deck on the 104th floor of the Willis Tower.

Wislow is a lifelong Chicagoan who watched this building go up 40 years ago. Now he's chairman and CEO of the company that manages it. Wislow says he has great respect for New York and for the developers and builders of One World Trade Center, which he calls a great symbol of American resilience. But, "I do think technically, if you strictly interpret the rules, that this would continue to be the tallest building," he says.

"I think it's pretty amazing," says Gloria Aragon. She lives in Chicago's suburbs and comes to the top of Willis Tower because the view is from a height that you cannot get anywhere else. "Just looking out at the architecture of the city surrounding on the ledge is a pretty unique experience," she says.

Even visitors from overseas agree. Lee Colgan and her family are visiting the sky deck from England.

"I think Chicago should have it, yeah," says Colgan. "The mast doesn't matter — it's the floors, in my eyes."

But Colgan doesn't get to decide; the Council on Tall Buildings and Urban Habitat does. It's based in Chicago — suspiciously — but it's made up of people from all over the world. Its 30-member "height" committee will be debating these buildings on Friday.

In the mid-1990s, the Sears Tower lost the title of the world's tallest building to the Petronas Towers in Malaysia (which have since been surpassed by others). Wood says "the decision was made then to distinguish between architectural height and material height. And that got distilled down to spires versus antenna."

An antenna is just functional — something with a technical purpose stuck on top of the building after it's finished. Spires are considered a continuation of the form of the building.

The council decided that antennas should not count toward height, but spires do count because they're part of the architectural design of the building.

That brings us back to that 408-foot mast on top of One World Trade Center: Is it a spire, as the designers argue? Or is it just an antenna? It certainly can and will function as an antenna, but it was part of the original architectural design to reach up to the symbolic height of 1,776 feet.

What's causing controversy is that the developers and the Port Authority of New York and New Jersey eliminated an ornamental fiberglass and steel cladding that was part of the original design, making it look to some more like an antenna now than a spire.

In addition, some members of the council are growing concerned about the increasing use of spires to reach what Wood calls "vanity heights." For example, the current tallest building in the world, the Burj Khalifa in Dubai, has a spire of 800 feet, which is a third of the building's total height.

"What it really comes down to is this: What are we measuring?" asks Wood. "If we are measuring man's ability to put materials above the plane of the earth, then it should just be material, irrespective of what that material or function is. Or, are we measuring man's ability to put man above the plane of the earth? Are we going with the highest occupied floor? Or something in between?"

The Council on Tall Buildings will be debating those issues at its meeting Friday in Chicago. Of course, this whole debate is sort of academic.

Neither the Willis Tower nor One World Trade Center is going to be able to claim the title of tallest building in the world. But the decision could set a precedent for tall buildings that will be around for a long time. The group could announce a decision as soon as next week.