Accessibility links
A Daughter Remembers Her 'Entertainer' Father Margaret Talbot tells the story of her father, actor Lyle Talbot, in her memoir The Entertainer. He began his career as an assistant to a traveling hypnotist, and went on to star in movies with Shirley Temple and Humphrey Bogart — and played next-door neighbor Joe Randolph on Ozzie and Harriet. 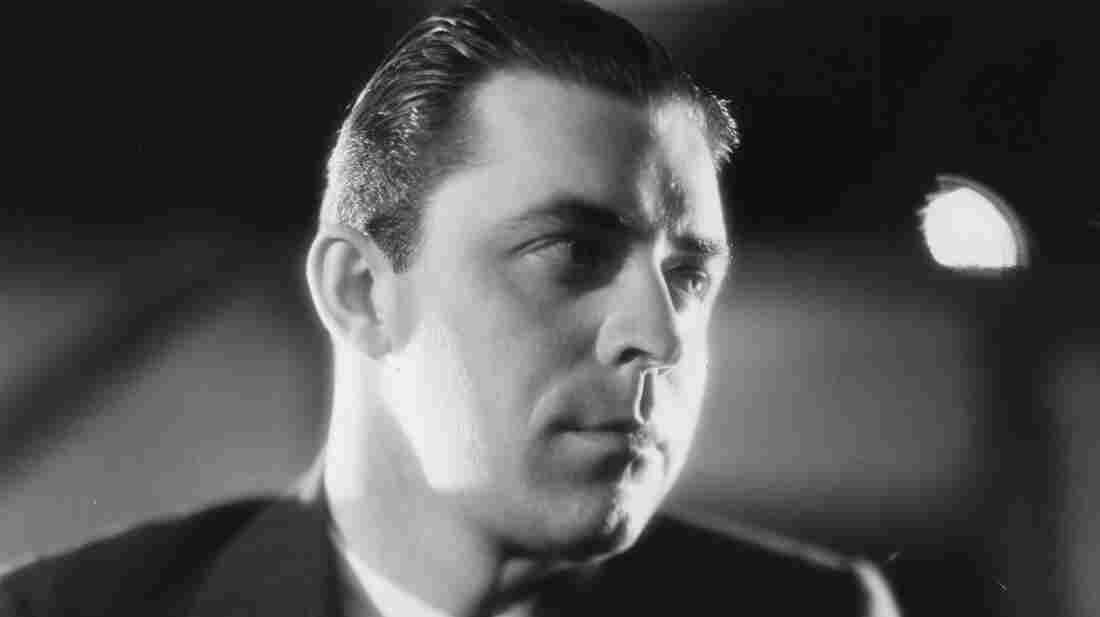 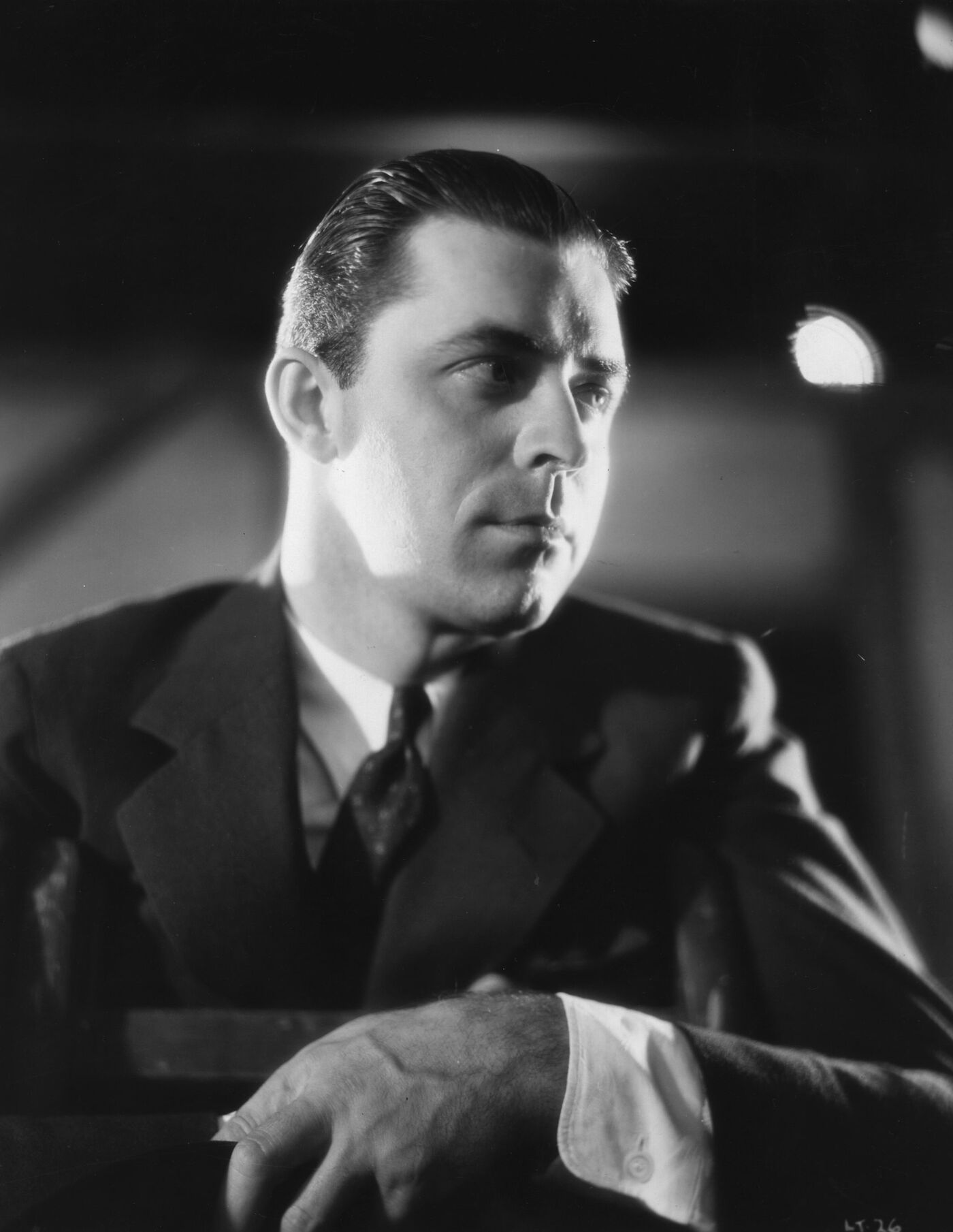 Lyle Talbot began his career as an itinerant carnival and vaudeville performer before eventually making his way to Hollywood.

This interview was originally broadcast on Nov. 21, 2012.

If you look up the name Lyle Talbot on IMDb, you'll find dozens of films and television shows he appeared in, starting with the 1931 short The Nightingale and ending with roles on Newhart and Who's the Boss. He made a movie with Bogart before Bogart was a star. He worked with child star Shirley Temple, was featured in the Ed Wood cult classics Plan 9 from Outer Space and Glen or Glenda?, and had a recurring role on The Adventures of Ozzie and Harriet as Ozzie's friend and neighbor Joe Randolph. 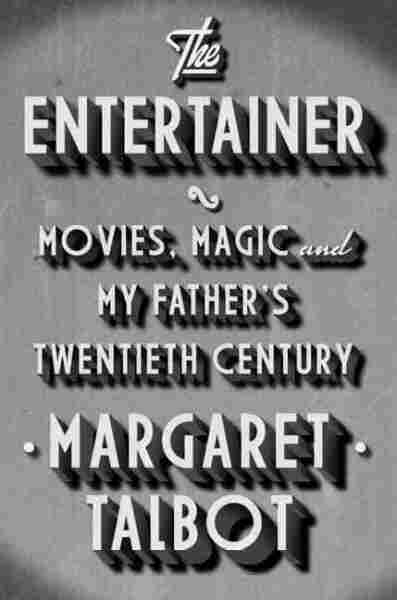 Talbot's daughter, Margaret Talbot, a staff writer for The New Yorker, has written a book about her father's life in show business. It's called The Entertainer: Movies, Magic and My Father's Twentieth Century and it's out in paperback this week. In writing about her dad's expansive career, she also explores how show business evolved across his era.

Lyle Talbot began his entertainment career as a member of a touring carnival that also put on theatrical productions. His first real break came when he was hired by a traveling hypnotist named MacKnight, where his main role was to have rocks broken on his chest.

"He would 'volunteer' from the audience, he would come up, he would lie between two chairs, and then MacKnight would put him into a deep slumber, supposedly, although my father said actually he was never hypnotized," Margaret Talbot tells Fresh Air's Terry Gross. MacKnight would call up another audience member, and this person would wield a mallet and break the rocks on Lyle's chest.

Eventually making his way to Los Angeles, Lyle Talbot signed on with the Warner Bros. studio. One of Margaret Talbot's favorite films from his time at Warner is the 1932 film Three on a Match, co-starring Bette Davis and Ann Dvorak, about three childhood friends who are reunited as young adults.

The movie was made at a time when studios were willfully ignoring the Hayes Code, which regulated what was morally acceptable to portray in films. Three on a Match featured storylines involving adultery, kidnapping and drug addiction — all themes that would be considered too controversial for films in the years to come.

Talbot, who was born when Lyle was 60, thinks the film marks the height of her father's charisma.

"He's a very seductive character," Talbot says, "a weak-willed kind of playboy character who has a conscience but is sucked into a life of crime, and he did that kind of character quite well."

On what she discovered about her father

"He had a long-term major alcohol problem that he eventually resolved quite resoundingly and successfully when he started a family with my mother, but that was a long time coming. ... He certainly loved women. He had many, many girlfriends, and in the course of writing this book, I discovered he'd had four wives before my mother. We'd always been a little vague in my family about the number of times that he had been married, so I was able to nail that down and was a little surprised by the number. 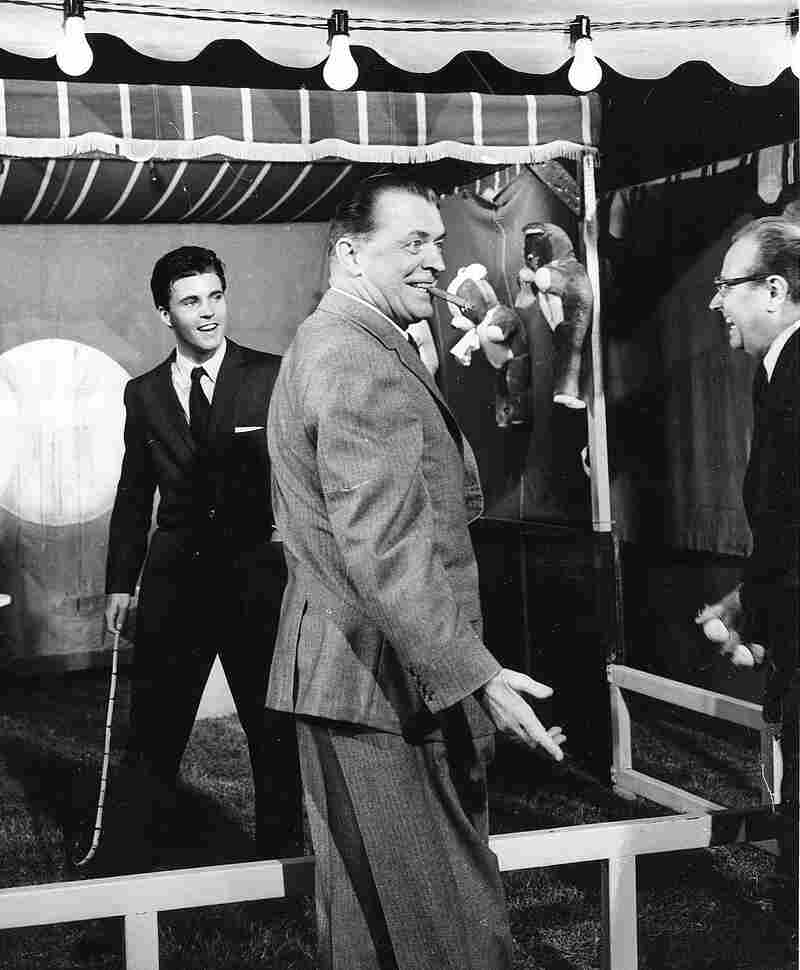 Lyle Talbot starred as Joe Randolph on the ABC sitcom The Adventures of Ozzie and Harriet throughout the 1950s and '60s. Courtesy of Margaret Talbot hide caption 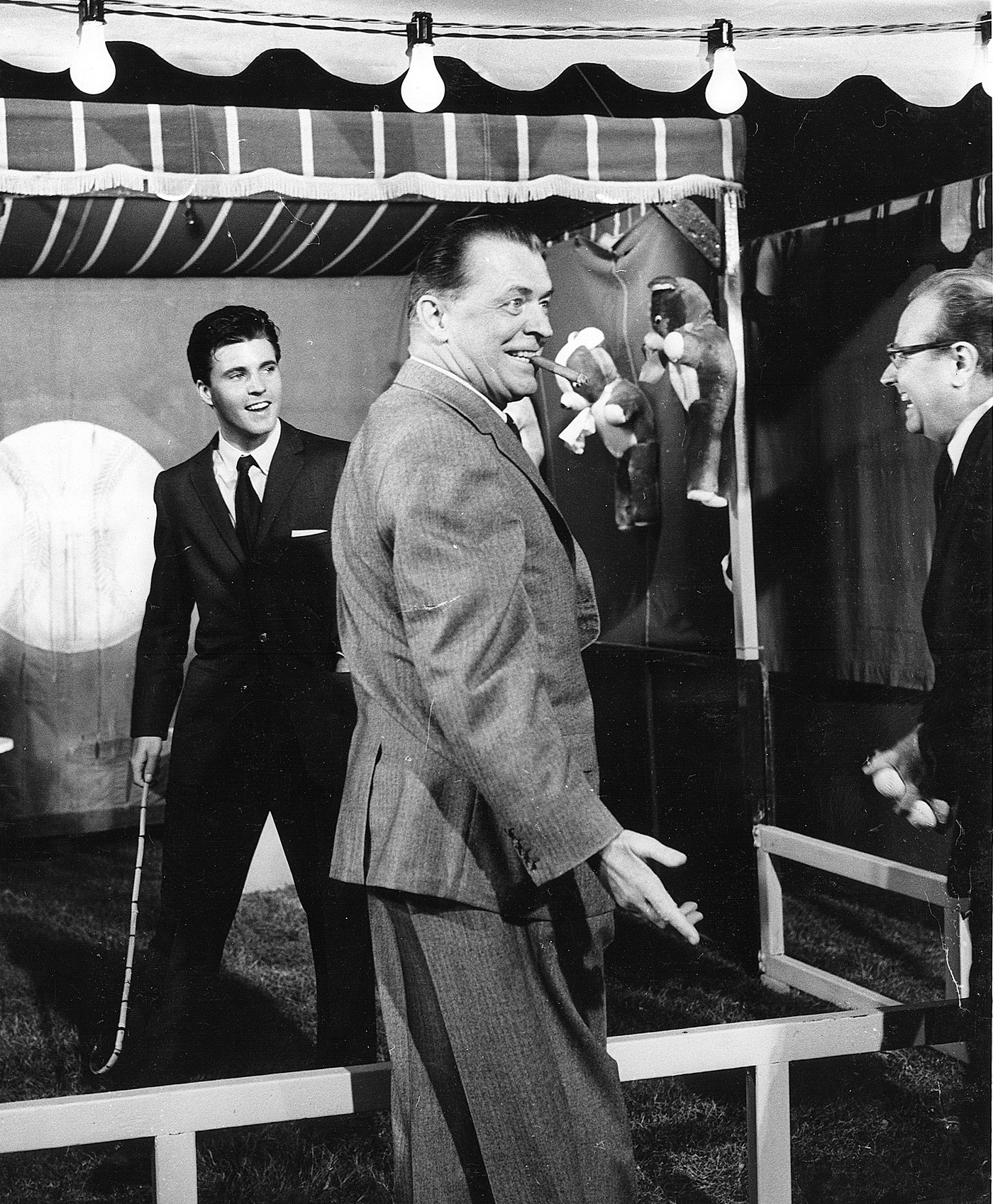 Lyle Talbot starred as Joe Randolph on the ABC sitcom The Adventures of Ozzie and Harriet throughout the 1950s and '60s.

"He particularly liked really live-wire women, some of whom were sort of tough, stubborn, mouthy types, and that got him into a certain amount of trouble. He finally found one in my mother who was also incredibly sweet and decent, so that worked. But before then, I think he had some — I guess we would call them 'hot messes' today — sort of very high-maintenance girlfriends and wives."

On the night Ed Wood stayed at her parents' home

"My father was really a very tolerant guy in many ways but didn't kind of know a whole lot about cross-dressing and transvestism ... and one night after a premiere of an Ed Wood movie — and you can imagine what kind of event that might have been — [Ed Wood] came home with my dad. They were driving together, but Ed Wood was drunk and couldn't remember where he lived, or couldn't tell my dad. So my dad said, 'Well, you can sleep it off in the car outside.' [He] went inside to the apartment and my mother was there, who was 26 years younger and a somewhat innocent person ... at that point, and they had the two little boys, my two brothers. And my mother, who is very soft-hearted, said, 'Oh, don't leave him out there on the street; have him come in and he can sleep in here. He can take our room, and we'll sleep in the boys' room.'

"So in the morning, the family was sitting around having pancakes with the little boys, and out comes Ed Wood, and he's wearing my mother's negligee and a bra that he had found evidently hanging on the back of the bathroom door. And that was it for my dad. He did order him to leave at that point. My mother, I think, was shocked but, knowing her, probably laughed a little, too. So he actually never saw Ed Wood again after that." 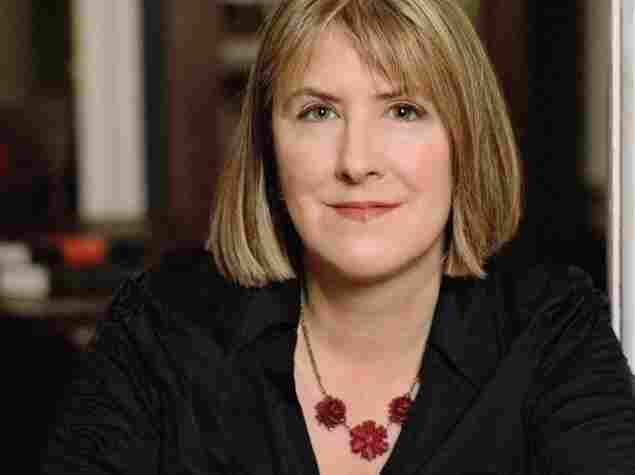 Margaret Talbot joined The New Yorker as a staff writer in 2003. Before that, she served as a contributing writer at the New York Times Magazine. Nina Subin/Courtesy of Riverhead hide caption 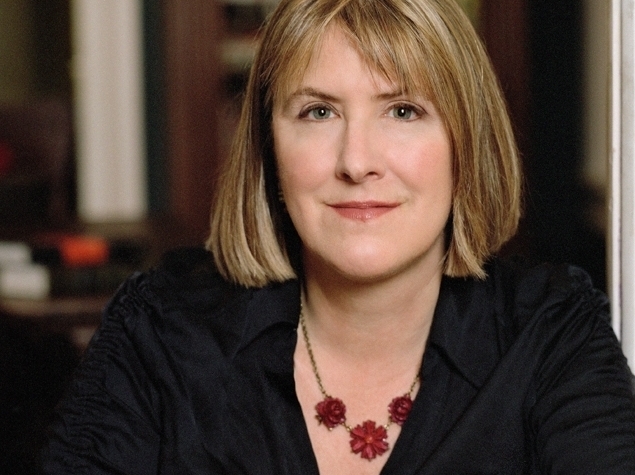 Margaret Talbot joined The New Yorker as a staff writer in 2003. Before that, she served as a contributing writer at the New York Times Magazine.

On having an older father

"When you're a kid, difference embarrasses you sometimes, so there were times when I felt a little embarrassed when people would ask if he was my grandfather. And he was very vain and didn't like that question. But mostly it was actually a really positive thing for me, because he had this kind of gallantry about him, which I associate with an earlier era and maybe with older men, and it was quite lovely.

"I was his youngest, and he had a lifestyle at that point where he was doing a lot of theater and going out on the road a lot. But when he was home, he was really a stay-at-home dad, very domestic in a way that was unusual for the '60s and '70s. He cooked my breakfasts and made me lunch and took me to school, so we spent a lot of time together, and he told me a lot of stories about showbiz ...

"After a while, as I became really fascinated by history, I loved the fact that I had this very vital living link to the past that I really sort of treasured. ... He would use terms like ... 'pictures' and 'talkies' and used terms to compliment my sister and I like, 'You look very smart,' which to me was a very sort of '30s kind of compliment. So I came to really value that as I came to value language, and particularities of language and history."

On acting in famous films but not being a recognizable actor

"He took actually a lot of pride in having been somebody who never had to take another kind of job — never had to sell real estate, or work as a waiter ... whatever people do on the side to make it work. He was able to act, to work in his chosen field, which he loved all of his life. And I think when you work in a system like that, that has such an obvious star hierarchy, a lot of people become very bitter, of course. If they have a moment where it seems like they might break through — and he did have a moment in the early '30s — and then they don't, they don't make it to the stratosphere or anywhere near it, that can really put some people off their life course and really ruin their lives.

"For my father, I think he took the attitude [of], 'I'm so lucky to be able to work in this field, this creative field that I love, and raise a family and have this kind of middle-class life as a working actor.' ... I think there are a certain number of points you get in acting, or in Hollywood, in many fields, for just sticking around. And he did — he acted until he was in his 90s."

Read an excerpt of The Entertainer