Accessibility links
Book Review: 'The Valley of Amazement' By Amy Tan Amy Tan's fans will find familiar themes in her new novel, The Valley of Amazement: mothers and daughters, multi-generational secrets, Chinese-American identity. But Jane Ciabattari says the new work, which centers on an American madam in Shanghai and her courtesan daughter, is more sophisticated than Tan's previous novels. 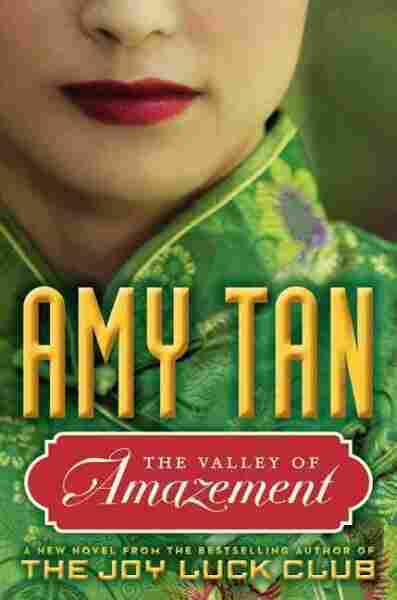 Family secrets, life-changing betrayals and the paradox of wondering about the old country while belonging to the new are at the heart of Amy Tan's work. She enthralled readers of her phenomenally successful first novel, The Joy Luck Club (1989), with the interlocking stories of four Chinese-born mothers and their four California-born daughters. Tan followed up with equally enduring portraits of fierce immigrant mothers who withheld secrets of the past while pushing their daughters forward in The Kitchen God's Wife (1991), and The Bonesetter's Daughter (2001).

Thanks to a family mystery — the discovery of a photograph that raises the possibility that her own grandmother might have been a courtesan in China early in the last century — Tan focuses her new novel on the elegant and trend-setting first-class "houses of flowers" for which Shanghai's international zone was once known.

By taking a child's perspective, Tan creates a sense of innocence, even wonder, at the goings-on in Hidden Jade Path. Tan sets the stage with sumptuous furnishings and cunningly designed clothing (like a special skirt with a middle panel that conceals a split the courtesan can maneuver flirtatiously), and gives us a cast of finely drawn and idiosyncratic minor characters, from the Cloud Beauties of Hidden Jade Path to Violet's vicious cat. 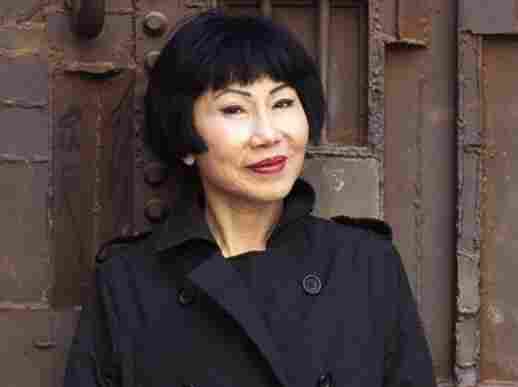 Amy Tan is the author of The Joy Luck Club, The Kitchen God's Wife, The Hundred Secret Senses, The Bonesetter's Daughter and Saving Fish from Drowning. Rick Smolan/Courtesy of Ecco hide caption 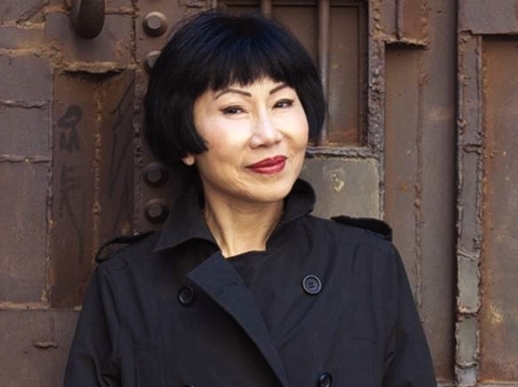 Amy Tan is the author of The Joy Luck Club, The Kitchen God's Wife, The Hundred Secret Senses, The Bonesetter's Daughter and Saving Fish from Drowning.

Violet's father, Lu Shing, is a Chinese painter from scholar family who became Lulu's lover when she was 16 (he was staying with her parents while studying in San Francisco). Pregnant with Violet, cast out by her own parents, Lulu accompanies Lu Shing to Shanghai, where she expects to marry. But Lu Shing's traditional family rejects her. After a series of wrenching betrayals, Lulu strikes out on her own in a time and a place where her choices are severely limited. Lu Shing retreats into the background.

As a child, Violet discovers Lu Shing's landscape painting, "The Valley of Amazement," among Lulu's hidden treasures. "It looked like dawn. Or was it dusk? ... Was the painting meant to depict a feeling of hope or was it hopelessness?" This question hovers over the novel as Violet, her mother and her daughter face ominous crossroads and repeated challenges to reinvent themselves.

Lulu is an enterprising and astute businesswomen, but her judgment fails when she dallies with a smarmy American nicknamed Fairweather. He betrays her to save himself from gambling debts, delivering Violet, now 14, to the rival Hall of Tranquility while Lulu waits for her on a ship bound for San Francisco.

Abandoned and forced into the life of a courtesan, Violet falls under the sisterly guidance of Magic Gourd, who advises her on how to become popular while "avoiding cheapskates, false love and suicide." Tan gives a vivid, sensually abundant picture of Violet's journey from virgin courtesan to vulnerable 25-year-old. She, too, encounters losses and betrayals. Her baby daughter, Flora, is taken from her, and through her own flawed judgment she is lured into a cruel ordeal in a remote village ironically named Moon Pond.

Some three-quarters of the way through the novel, Tan loops back to tell the story of Lulu's early years — her infatuation with Lu Shing, her decision to follow him to Shanghai and the founding of Hidden Jade Path. By structuring the novel in this manner, Tan makes poignant how the fates of Lulu and Violet mirror each other in uncanny ways, and builds to her startling conclusion.

So, how was it? I read The Valley of Amazement quickly, intrigued by the concentric tales. It's akin to her earlier work, yet more sophisticated, and a fine reminder that Amy Tan is herself a master of illusion, and one of the best storytellers around.

Read an excerpt of The Valley Of Amazement