Accessibility links
Interview: Thacher Hurd, Author Of The Foreword For Gertrude Stein's 'The World Is Round' Most people know Stein as the author of experimental fiction and the host of salons for the great artists of her time. But in 1939, Stein also became a children's book author. The World Is Round — a collaboration with illustrator Clement Hurd, of Goodnight Moon fame — follows the adventures of a young girl named Rose. 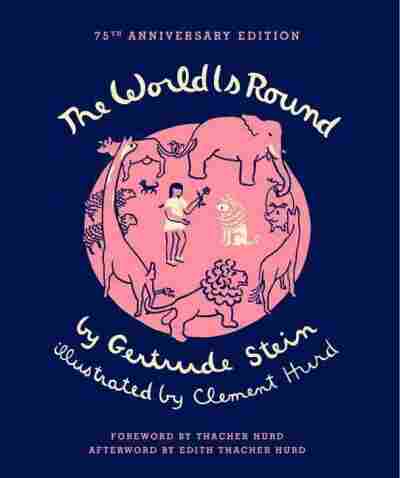 The World Is Round

by Gertrude Stein and Clement Hurd

Title
The World Is Round
Author
Gertrude Stein and Clement Hurd

You might know Gertrude Stein from that college class where you studied her experimental fiction, or maybe you remember her as the host of salons for famous 20th-century artists like Henri Matisse, Pablo Picasso and Ernest Hemingway.

But here's a side of her you might not know: Stein the children's book author. Her book for kids was a collaboration with illustrator Clement Hurd, the artist behind Goodnight Moon and the mystical rabbits in The Runaway Bunny. The book, The World Is Round, follows the adventures of a young girl named Rose, and it's just as beautiful and fascinating as anything Stein — the mother of modernism — put her hand to.

The World Is Round turns 75 this year, and the anniversary is being marked with a rerelease that replicates how the book looked when it first came out in 1939. Clement Hurd's son, Thacher Hurd, a children's book author in his own right, contributed the foreword. He tells NPR's Don Gonyea about how Stein came to write a children's book and why it's a good read for adults, too.

On how Stein came to publish her first children's book

My parents were just starting to get into doing children's books in the late '30s in New York, and there was a children's publisher called Young Scott Books, and one of the people involved in this was also Margaret Wise Brown [author of Goodnight Moon and The Runaway Bunny]. So one day at an editorial meeting, she said, "Why don't we write to some well-known authors and see if they'll do a children's book?"

Gertrude Stein, pictured here in 1935, wrote another children's book titled To Do: A Book of Alphabets and Birthdays. Associated Press hide caption

Gertrude Stein, pictured here in 1935, wrote another children's book titled To Do: A Book of Alphabets and Birthdays.

And Hemingway and Steinbeck said, "No,thanks," but Gertrude Stein said, "Yes, I would love to write a children's book — in fact I've almost finished it already."

On how his father was chosen to illustrate the book

The first choice was an English painter named Francis Rose. Stein wanted him to illustrate the book mainly because his name was Rose, and the heroine of The World is Round is named Rose, and, of course, it's Stein's most iconic saying: "A rose is a rose is a rose."

But nobody really liked Francis Rose's paintings. ... They convinced her, they said, "We'll have a kind of competition, and then you decide." And when the package [from Hurd] arrived, [the customs people] called up Gertrude Stein ... and they said, "We'd like you to come down and pick up this package, and there's a customs duty on it."

So she went down to the customs house, and they told her some exorbitant amount for the duty, and she said, "Well, I'm not going to pay it until I see what's inside." So they open it up for her, and she sat in the customs house looking at the artwork and then she closed it up and said, "I don't want it, send it back," thereby avoiding the duty.

And she went back to her apartment and she wrote a very detailed letter to my father saying that she would like to have him illustrate it and with very specific suggestions about the artwork. So she had taken the whole thing in, just by briefly looking at it.

On why this children's book works for adult audiences

It's sort of an abstract book. It doesn't have a particularly strong plot, but it has this sense of rhythm underlying it that's quite fascinating, I think. ... And I think it's a wonderful thing to just sit around and read out loud for adults.

When they first got the book, Margaret and the editors — William Scott and his brother-in-law — they sat at her apartment reading it out loud, that was the first way they read it. And in the middle of reading it, the lights went out, because Margaret chronically forgot to pay her utility bills, so they sat by candlelight reading the book and, I think, were entranced.

Gertrude Stein's Silly — And Stilted — 'To Do'

For Gertrude Stein, Collecting Art Was A Family Affair