Accessibility links
Ruling On NYC Disaster Plans For Disabled May Have Far Reach A federal judge has ruled that New York City didn't do enough to protect residents with disabilities when Superstorm Sandy hit last year. The city is widely considered a leader in disaster response, so the ruling is likely to prompt cities around the country to re-evaluate their own plans. 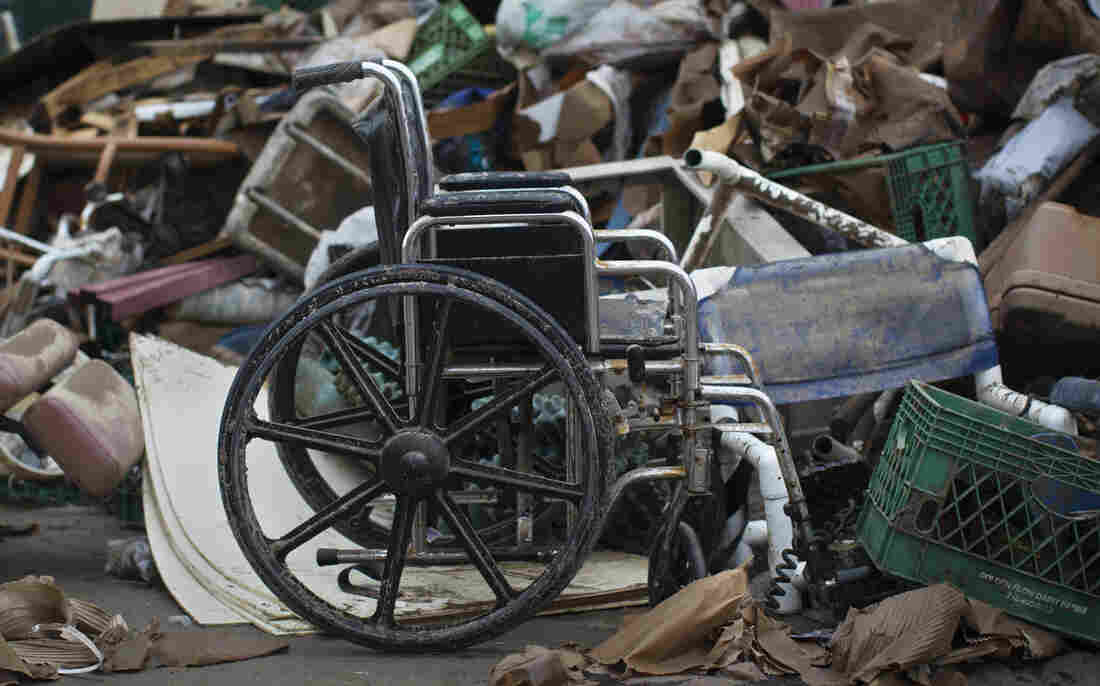 A wheelchair is among debris from Superstorm Sandy in the Queens borough of New York on Nov. 13, 2012. A judge ruled Thursday that the city does not have adequate plans for evacuating people with disabilities. Shannon Stapleton/Reuters/Landov hide caption 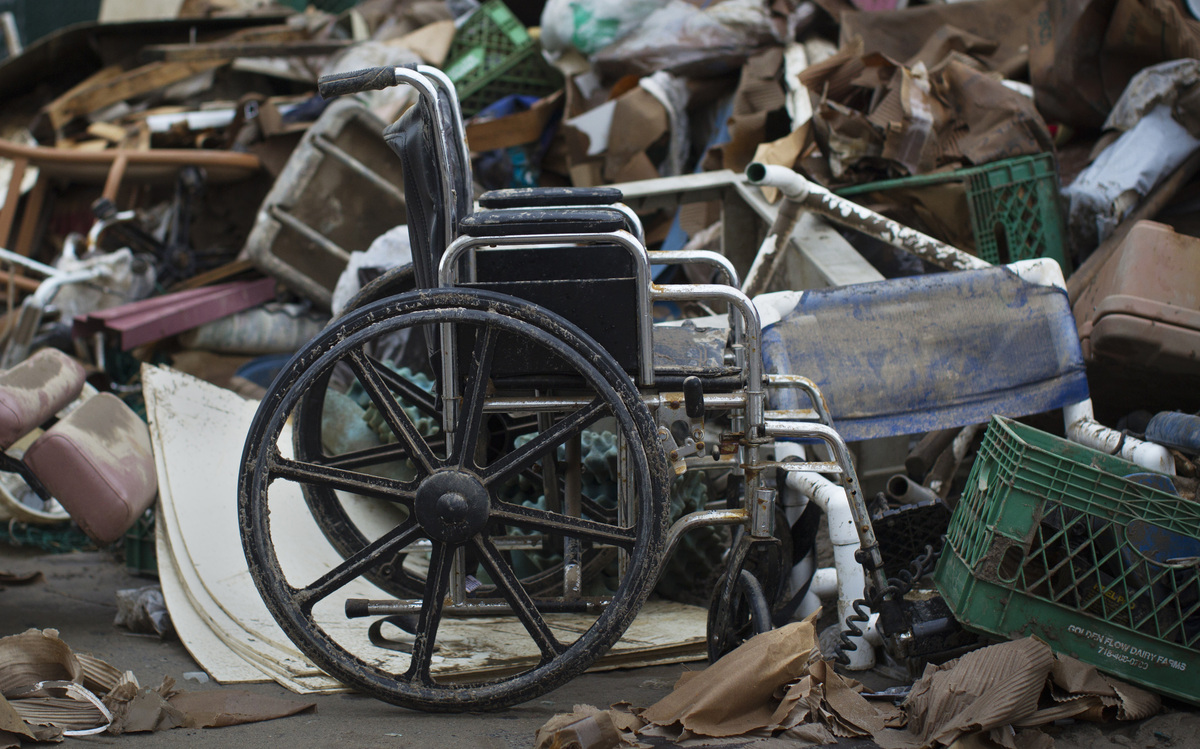 A wheelchair is among debris from Superstorm Sandy in the Queens borough of New York on Nov. 13, 2012. A judge ruled Thursday that the city does not have adequate plans for evacuating people with disabilities.

A year after Superstorm Sandy stranded many New Yorkers without power for days, a federal judge has ruled that New York City's emergency plans violate the Americans with Disabilities Act. Those shortcomings, the judge found, leave almost 900,000 residents in danger, and many say the ruling could have implications for local governments across the country.

Shortly before Sandy hit the East Coast last October, New York Mayor Michael Bloomberg addressed a nervous city, urging people in the most flood-prone areas to evacuate. "We have a plan to keep you and New Yorkers safe," he said. "If you follow that plan, we'll get through this storm just fine."

But that plan didn't work for everyone. In the chaotic days after the storm, stories emerged of people trapped in darkened high-rises, struggling to survive.

Melba Torres has cerebral palsy and uses a 500-pound, battery-powered wheelchair to maneuver in her small New York City Housing Authority apartment. She's on the Lower East Side in what was "Zone A" — the area most at risk of flooding in a big storm.

Torres says she got an evacuation notice less than three hours before her building shut down. That didn't leave enough time to line up transportation that could take her wheelchair, she says.

"We were still here. The elevators had been shut down so, at that point I was thinking, 'Oh dear God, how am I going to come down?' " Torres recalls. "I live on an eighth floor and I was really afraid."

Taking Stock Of What Was Lost And Found Post-Sandy

Soon after, the power went out, leaving Torres and her aide in darkness. "Total fear came over me and I just cried," Torres says. "I felt trapped."

Torres was stuck in her apartment for six days. She ended up being part of a federal lawsuit alleging that New York City's emergency plans violate the Americans with Disabilities Act, a law that guarantees people with disabilities equal access to programs and services.

On Thursday, U.S. District Court Judge Jesse Furman ruled against New York. He praised the city for the effort it puts into emergency preparedness, but wrote that its plans are inadequate to ensure that people with disabilities are able to evacuate. He also found that shelters are inaccessible.

Susan Dooha, executive director of the Center for Independence of the Disabled in New York, one of the plaintiffs in the lawsuit, says her clients are thrilled with the ruling.

Martha Calhoun, an attorney with the City of New York, worked on the case. She says the city is still reviewing the ruling and figuring out what it will mean.

"Obviously we're disappointed with some of the court's conclusions," she says. "But we're also very gratified that Judge Furman recognized the significant challenges of emergency planning in this city and that he praised the extensive planning that the city does do."

The suit appears to be only the third of its kind nationwide — and the first to go to trial. The nonprofit group Disability Rights Advocates has been behind all of those cases.

Sam Bagenstos, who teaches disability law at the University of Michigan Law School, says people across the country were watching the New York case closely. The ruling, he says, is "a very big deal."

The issues raised in the lawsuit are not new. The National Council on Disability, which is a federal agency, has been warning since before Hurricane Katrina that local governments aren't ready to protect people with disabilities during emergencies.

Bryan Koon, director of emergency management for the state of Florida, is on the board of the National Emergency Management Association. He says emergency planning for people with disabilities can be hard — especially in a dense city like New York.

"It's extremely complicated and difficult, so they may have to spend a great deal of time and money on making sure that they do get the plans up to what the judge's ruling required them to do," he says.

Koon added that New York City is widely respected for its ability to handle a disaster. So if that city could lose such a lawsuit, then emergency planners across the country are likely to go back to look closely at their own plans.