Accessibility links
Here's A Wild Idea For Shakespeare: Do It His Way In the new Broadway productions of Twelfth Night and Richard III, imported from London's Globe Theatre, the director and actors put on the shows pretty much as the Bard would have staged them — with an all-male cast and everything.

Listen
Here's A Wild Idea For Shakespeare: Do It His Way 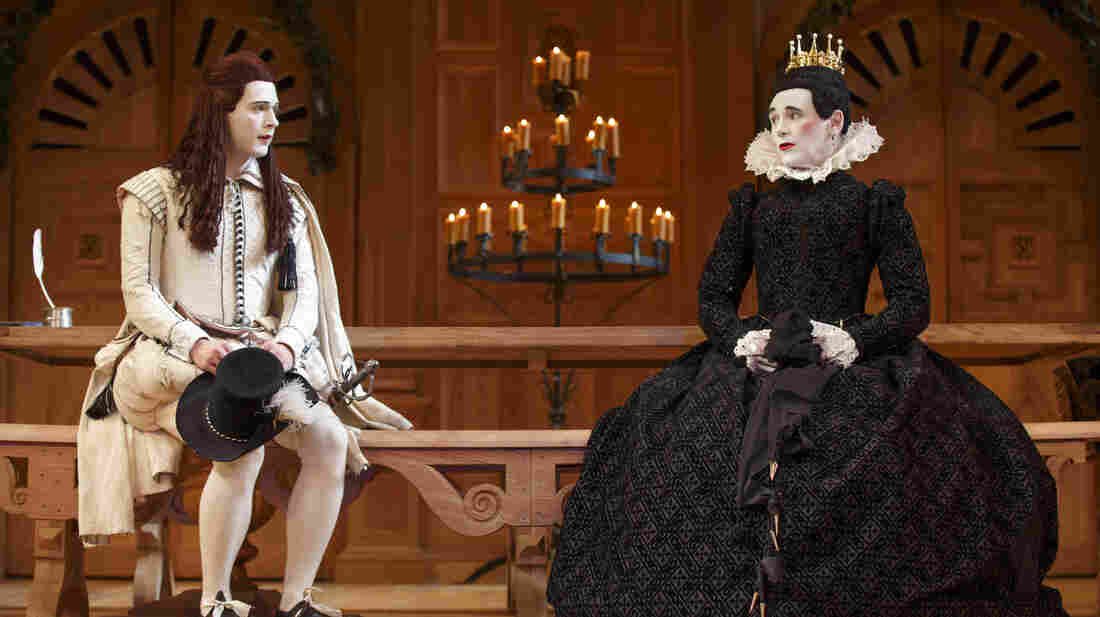 Mark Rylance as Olivia (right) and Samuel Barnett as Viola in Twelfth Night. The Broadway production, which first played at London's Globe Theatre, is done in the Elizabethan tradition, with an all-male cast. Joan Marcus/ hide caption 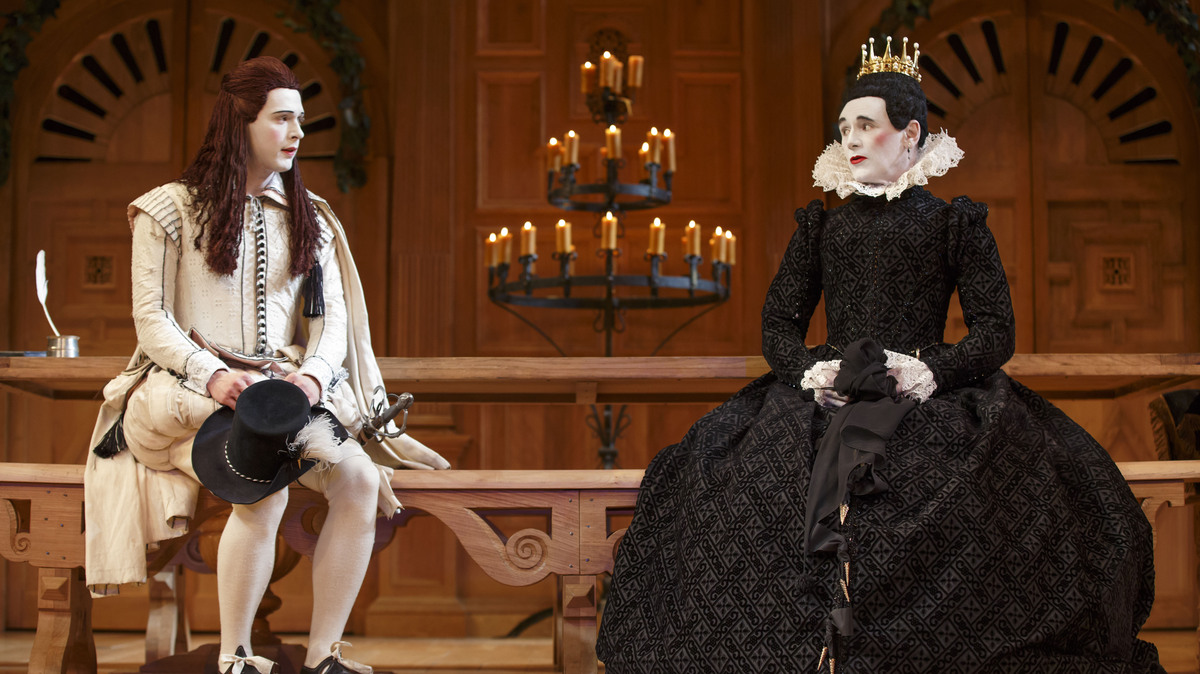 Mark Rylance as Olivia (right) and Samuel Barnett as Viola in Twelfth Night. The Broadway production, which first played at London's Globe Theatre, is done in the Elizabethan tradition, with an all-male cast.

This season, New York audiences have seen wildly different interpretations of Shakespeare plays. They've seen the Romeo of Orlando Bloom make his first entrance on a motorcycle; they've seen a production of Julius Caesar set in a women's prison.

Now the London-based company from Shakespeare's Globe Theatre has landed on Broadway with what seems like the most radical concept of them all: plays staged in a style Shakespeare would've recognized, with all-male casts, period costumes and live music.

As the audience enters the Belasco Theatre, there are immediate indications that they're being transported back to the world of Elizabethan England — the set, all carved wood, looks like an old Oxford dining hall. Actors mill about the stage in doublets and hose. Candles are being lit on elaborate chandeliers, then hoisted above the stage on ropes. Musicians play shawms and sackbuts, lutes and recorders.

And, most important, on either side of the stage, some members of the audience sit in a two-tiered gallery, in full view of the actors and the rest of the audience. 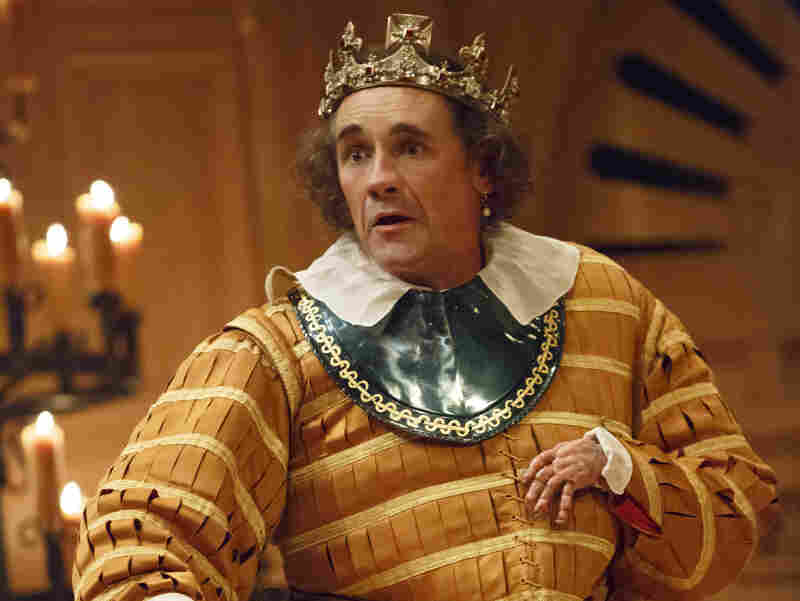 My kingdom for a horse: In the second play, Richard III, Rylance takes on the part of the ruthless monarch. Joan Marcus/ hide caption 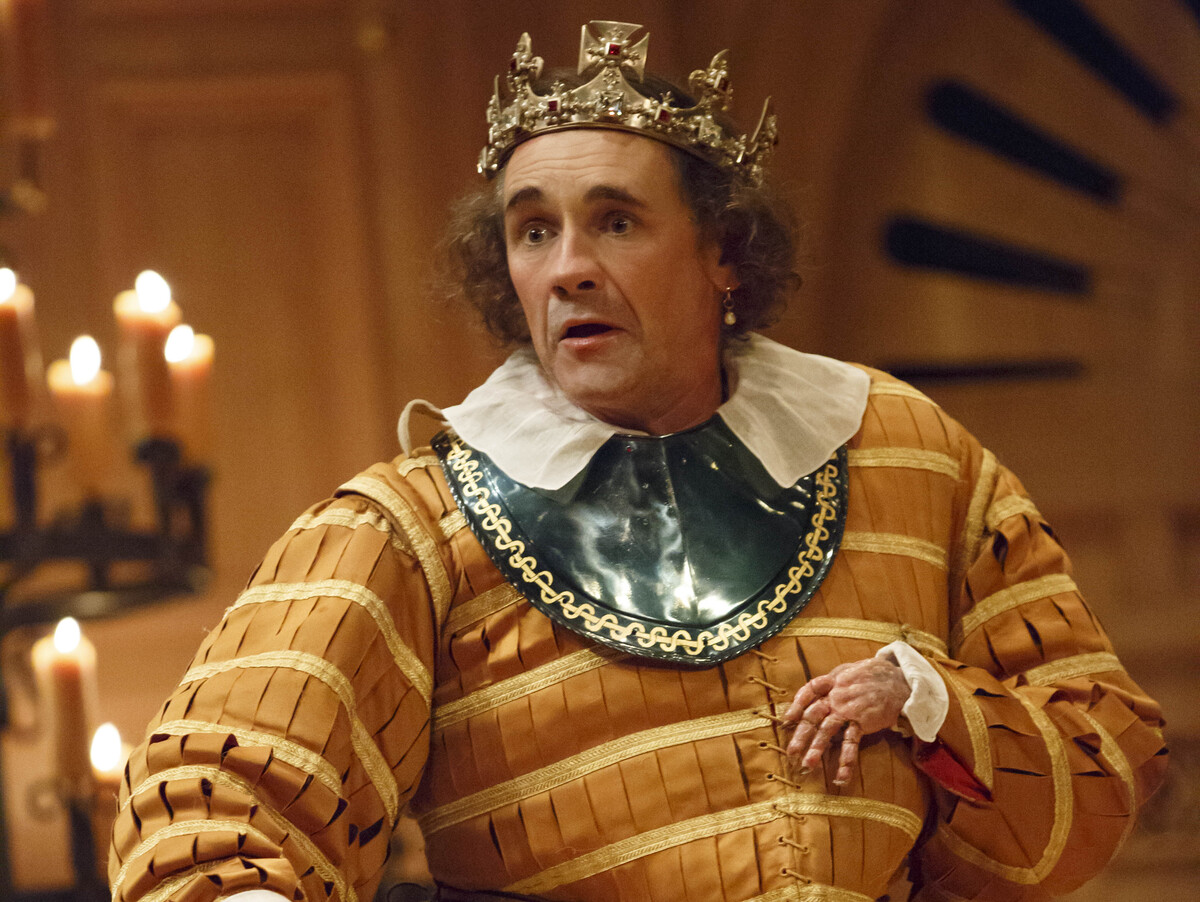 My kingdom for a horse: In the second play, Richard III, Rylance takes on the part of the ruthless monarch.

But they haven't entered some Shakespeare museum. The plays come to life with a vibrancy that's very much of the moment.

"When you play in the Globe, and you are all in daylight, it seems crazy to pretend the audience isn't there," says director Tim Carroll, who first staged Twelfth Night and Richard III — the two open today for a 16-week Broadway run — in the company's open-air London home.

"So we really began to explore the notion of 'What if you simply accept that they are there?' Shakespeare himself frequently reminds us that we're watching a play.

"He has Fabian say [in Twelfth Night], 'If this were played upon a stage now, I could condemn it as an improbable fiction,' which is about as direct a way as you can imagine of saying, 'You do know that we know you're there, don't you?'"

So the soliloquies, far from being internal monologues, are spoken directly to the audience — sometimes even directly to people in the galleries.

In this strict Elizabethan style, there's hardly any set to define where scenes take place. Sometimes it's just a table and chairs, says Carroll.

"The most important thing in this kind of work is, indeed, the actor," he says. "This style puts the emphasis on them to a degree which is very scary if you don't have the right actors."

Luckily, Carroll has assembled a company of veterans from the Globe that includes Tony Award-winning actor Mark Rylance, who plays the murderous Richard III as well as the love-besotted Olivia in Twelfth Night. Rylance says since there is virtually no scenery onstage, the audience needs to listen very closely to Shakespeare's language to know where they are and who they're with. 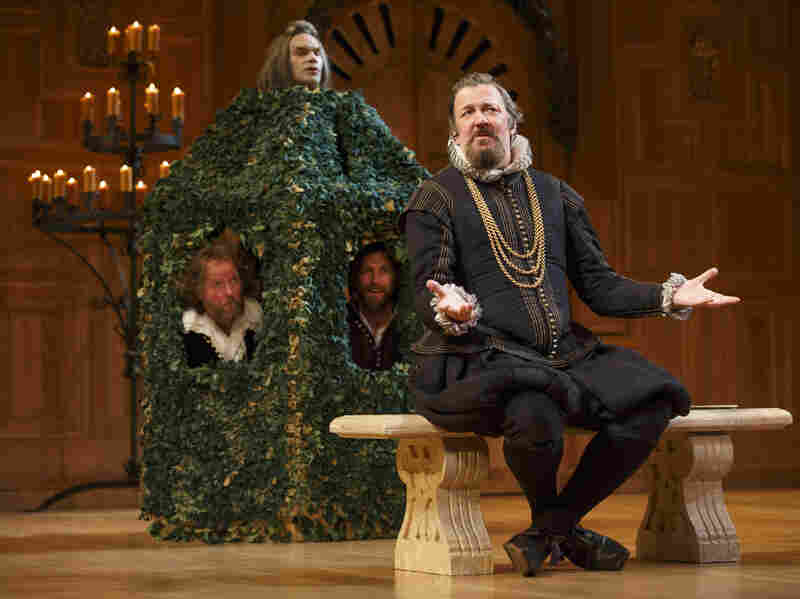 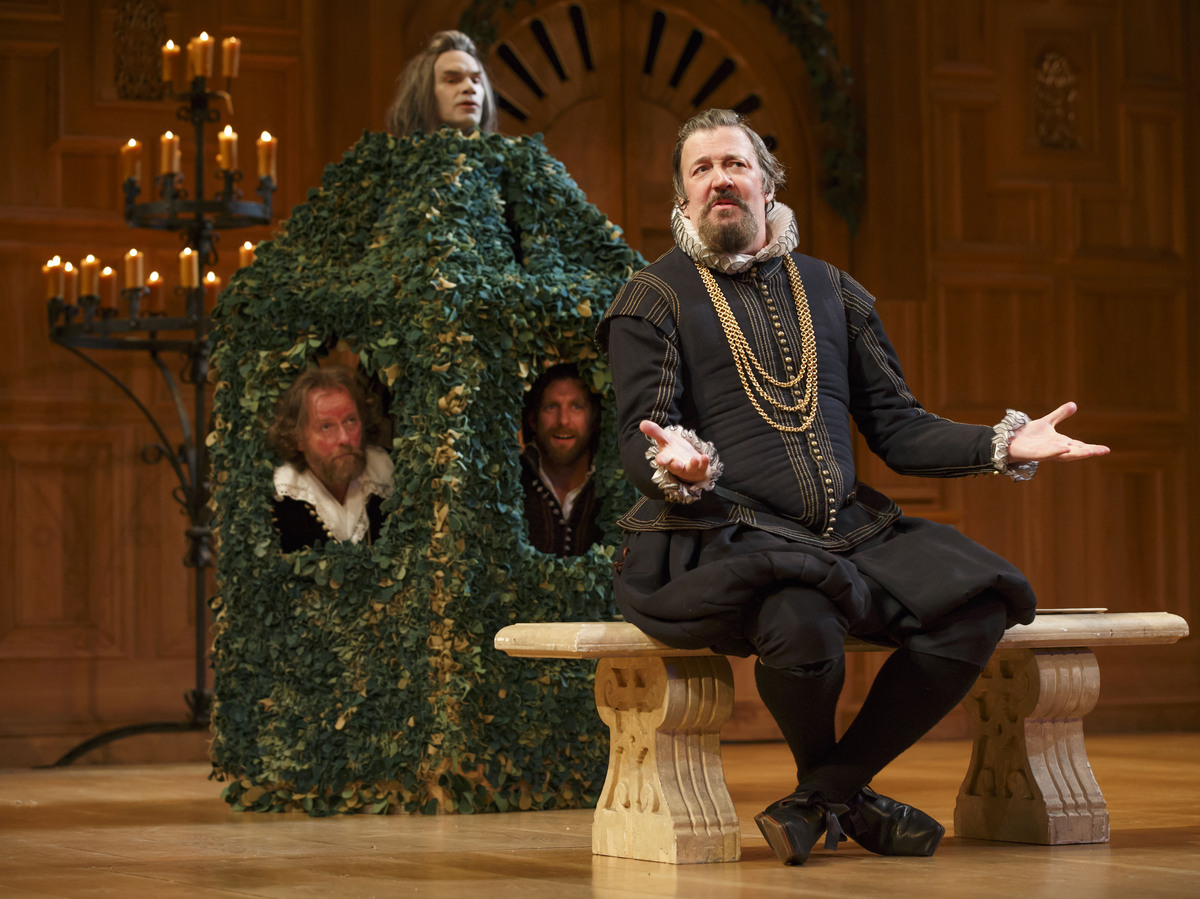 "In Shakespeare's day, people said they went 'to hear' the plays," he says. "No one wrote 'I saw Julius Caesar. Or I saw whatever.' They always say, 'I heard, or I'm going to hear this play, or I went to hear.' It was an aural tradition."

"The story is very clearly happening in the audience's imagination, not happening onstage," he explains. "We're prompting it with words and movements and things, but it's all happening in their imagination. So, there's a general spirit of playing with an audience, rather than for them or at them or to them."

How Shakespeare Would Have Done It

And audiences really need to engage their imaginations when it comes to the portrayal of female characters.

As in Shakespeare's day — there were laws — all the women are played by men. So, in Twelfth Night, the character Viola is played by a man. But for most of the play, Viola is disguised as her twin brother, who's supposedly been lost in a shipwreck. So there's a man playing a woman playing a man. And there's Mark Rylance playing Olivia, the woman who's falling in love with the "man" who's really a woman, who's being played by a man. (Follow?)

"People ask me a lot about the all-male thing and what you get from it," Carroll says. "And, of course, Twelfth Night provides the easiest answer, in that you get not only two twins who really can be mistaken for each other, but you also get the levels of confusion that Shakespeare wrote for his original company."

Actor and author Stephen Fry is making his Broadway debut as Malvolio, the comically pompous steward in Twelfth Night. He wears yellow stockings and crossed garters that are made exactly as they would have been in 1602, when the play premiered.

"Talking to the audiences afterwards, [it seems] the whole experience has been completely new for them," Fry says. "Which is sort of counterintuitive, given that we've gone right back to the very beginning, and we're giving it, as closely as we possibly can ... to the way that Shakespeare would've done it and his company would've done it. And that makes it fresher and newer than so many productions, where a director tries to write a kind of thesis on the stage."