Accessibility links
Lighting Up The Investigative Path With Polonium-210 Conspiracy theories continue over the death of Palestinian leader Yasser Arafat, and polonium is suspected as the weapon of the alleged assassin. Whatever happened to Arafat, there is a case from 2006 that shows just how destructive the radioactive element can be. It all started with a sip of green tea. 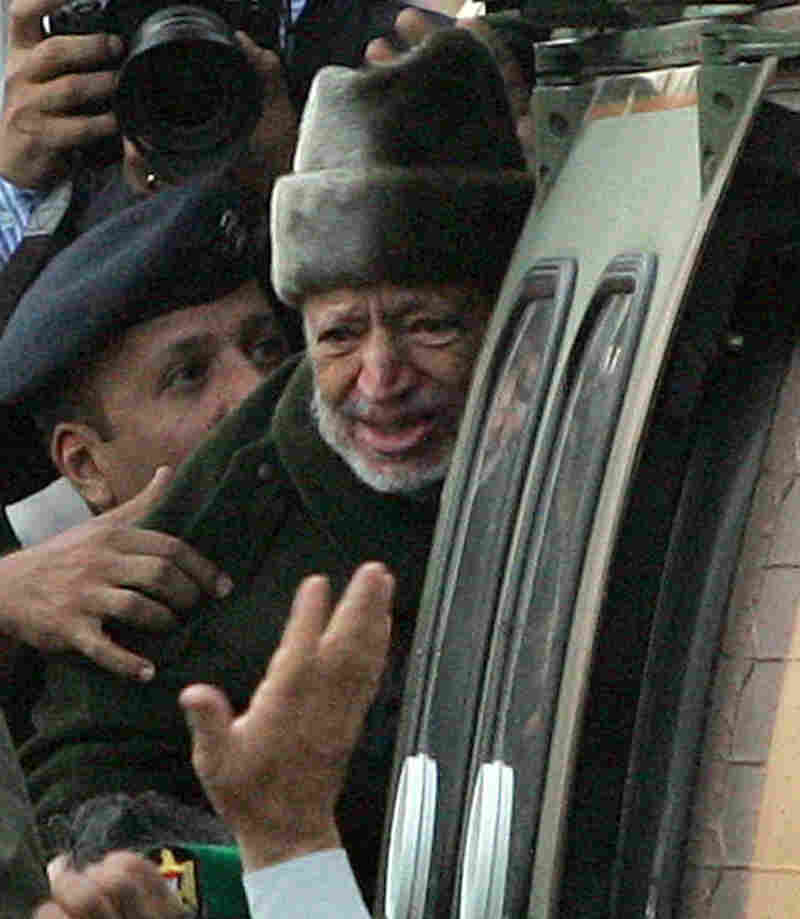 Palestinian leader Yasser Arafat boards a helicopter in Ramallah, the West Bank, for the start of his journey to a hospital in France on Oct. 29, 2004. He died 2 weeks later. Scott Nelson/Getty Images hide caption 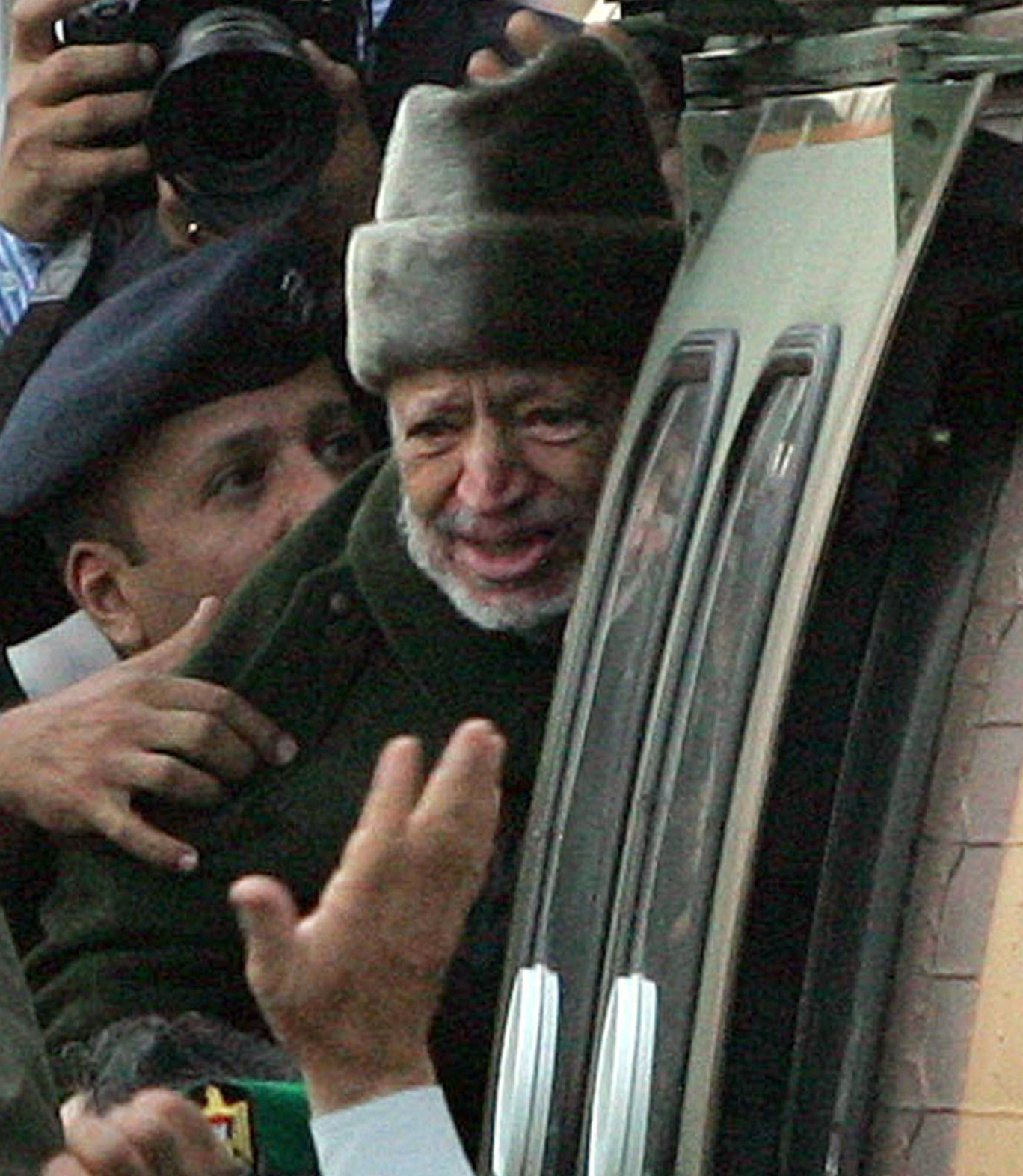 Palestinian leader Yasser Arafat boards a helicopter in Ramallah, the West Bank, for the start of his journey to a hospital in France on Oct. 29, 2004. He died 2 weeks later.

With a Swiss forensics investigation pointing to polonium-210 as a possible cause of Yasser Arafat's death, the radioactive element is back in the news.

Confirming whether the Palestinian leader died from an assassination attempt will be difficult, given polonium's short half-life and the fact that Arafat has been dead nine years, science writer Deborah Blum says.

Whatever happened to Arafat, polonium does have a deadly history.

"Polonium only really came to public attention when we started using it to kill each other," says Blum, author of The Poisoner's Handbook.

One such incident took place on a chilly November afternoon in 2006, in London's Grosvenor Square.

That day, three Russians ordered drinks at the upscale Pine Bar in the Millennium Hotel.

"It's very hushed. Full of shadows and whispers, dark wood paneling and leather seats," says Will Storr, author of "Bad Blood," an essay published earlier this year in MATTER. "It's very discreet."

Andrei Lugovoi and Dmitry Kovtun ordered gin, and a 43-year-old Russian dissident named Alexander Litvinenko drank green tea. As far as Litvinenko was concerned, it was a business meeting with two old acquaintances.

"He goes home to his little house with his wife Marina, has a chicken dinner, watches the Russian evening news and goes to bed," Storr says. "It was just a normal night."

But within hours, Litvinenko began having bouts of severe vomiting. Litvinenko knew immediately that he had been poisoned. His wife called for an ambulance.

"He goes to the local hospital in Barnett and tells the doctors there, 'I've been poisoned by Russian spies.' And of course they suggest that he calls for a psychiatrist because he had sushi for lunch," Storr says. "So they were like, 'It's food poisoning. You've just been poisoned by some bad sushi.' "

But days passed and Litvinenko's condition worsened. He was put on a feeding tube and started losing his hair. Antibiotics were administered and tests for AIDS and hepatitis came back negative. Doctors were at a total loss.

Blum says death comes quickly because polonium-210 has a half-life of just 138 days.

"For a while it's hissing and spitting with radiation and energy, and then it burns itself out," she says. As it stabilizes, the polonium emits alpha particles.

"Alpha radiation is not highly penetrating radiation," Blum says. "If I was standing in front of you with a container of polonium-210, I could hold this in my hand and it would not go through my skin. So for it to be dangerous, you have to swallow it."

All the assassin had to do was put the odorless polonium in Litvinenko's green tea. From the moment he took his first sip, he was doomed. 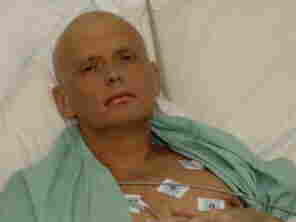 Alexander Litvinenko died in 2006 of poisoning from polonium. Doctors spent weeks trying to find the cause — but they couldn't have stopped him from dying. Natasja Weitsz/Getty Images hide caption

"If you can imagine that you swallow an element that's basically radiating, you can almost visualize this as a tiny dot with sparks shooting out in all directions like a sparkler," Blum says.

Minutes after ingestion, it would have already begun to destroy the lining of his stomach.

"It embeds in those tissues, it goes into your blood stream, and what happens quite often with particularly these elements that are in that radium decay chain as polonium is the structure is a little bit like calcium," Blum says. "So the body loves to deposit them in the bone."

Once it settles in the bone marrow, the victim begins to die.

"Your hair falls out, you can't eat, you can't breathe, it damages your lungs, you are hugely subject to infection, it's phenomenally destructive once it's in your body," she says.

Even if doctors discovered the poison sooner, polonium-210 has no antidote.

As the polonium-210 underwent alpha decay, it was a race against the clock to solve Litvinenko's murder. Blum says forensic investigators tracked the poison by following the radioactive trails it left all over London — "restaurant seats, airline seats, tea bars, sushi bars."

They were trails not only left by Litvinenko, but also by the killer himself.

"You turn off all the lights in London because polonium-210 has this faint blue glow," says Blum. "Pale blue, glowing trails lighting up the path of murder."

Andrei Lugovoi, one of the Russian men at the Pine Bar that afternoon, became the prime suspect. But he was never convicted. Lugovoi pulled out of the Litvinenko inquest in London and has since become a wealthy Russian politician.

"This has been written about as the first-ever successful nuclear attack on the West by Russia," says Storr. "It's a major situation."

Despite the evidence for the Litvinenko case, "you can't say that was a case that resolved with justice," Blum says. As for Arafat, Blum says the likelihood of finding an assassin — if there is one — is even slimmer.