Accessibility links
Portland's Pot Vote Could Make It A Gateway City For Maine Voters in Portland, Maine, this week passed an ordinance to legalize possession by an overwhelming margin. Legalization advocates' hopes are high for the rest of the state — and around the northeast. 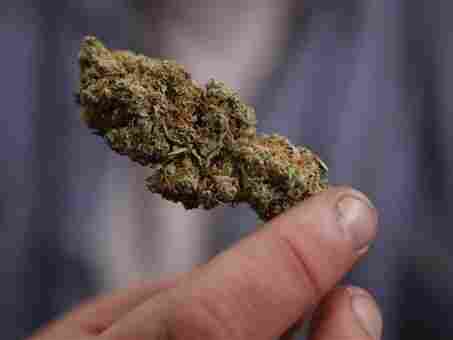 It's been a big year in the marijuana legalization movement. Not only did Colorado and Washington voters make marijuana legal last November, but this week Coloradans approved a ballot measure to tax marijuana sales.

Also this week, Michigan voters in three cities removed penalties for possession. And in Portland, Maine, voters passed by an overwhelming margin an ordinance to legalize possession of up to 2.5 ounces.

At a victory party at a Portland pub Tuesday night, activists lit up a foot-long joint and passed it around in celebration — until they were asked to put it out. Smoking pot in public is still illegal, and marijuana remains outlawed at the state and federal levels.

That's why Portland Police Chief Michael Sauschuck says not much will change as a result of the city's vote.

The other reason Sauschuck says it won't change much is because Maine is one of 13 states that has already decriminalized marijuana possession. It's just a civil offense, punishable by a fine of up to $1,000.

Portland police aren't handing out many citations. They issued 54 last year and 68 the year before.

"This is nothing we're going to be waiting around the corner to pounce on somebody who's smoking a joint somewhere in possession of marijuana," Sauschuck says. "But we will enforce the law when we come into contact with that."

But Rob Kampia of the Marijuana Policy Project says the best way to restrict access is to treat marijuana like alcohol and tax and regulate it, and that starts with legalization.

That includes most of the New England states. Kampia says they're being targeted for legalization efforts because polls show the chances for success are good.

"The public support is at 50 percent or higher in all these ballot initiative states and really, quite frankly, the other states too, where we're lobbying the state legislatures," he says.

Kampia hopes the lopsided victory in Portland this week will build momentum in Maine and around the northeast the way voters in Denver did for the rest of Colorado.

This year, the Maine Legislature rejected a bill to tax and regulate marijuana statewide by just a few votes. State Rep. Diane Russell, a Democrat, to plans to reintroduce a similar measure now that she has evidence about how her Portland constituents feel about the prohibition of pot.

"When 67 percent of voters say it's time for a change, that this is not working anymore, I think politicians would be smart to rethink their positions and to respect the will of the people," Russell say.

If the bill is unsuccessful, activists say they plan to try their luck at the ballot box in 2016.