Accessibility links
Merchant Marines See New Obstacles In Food Aid Proposal The U.S. share of international shipping has been shrinking ever since World War II. The latest threat comes from a proposed change that would allow the U.S. to buy a large percentage of its food aid in local markets, instead of from the U.S. That would mean less shipping from the U.S., and possibly fewer jobs. 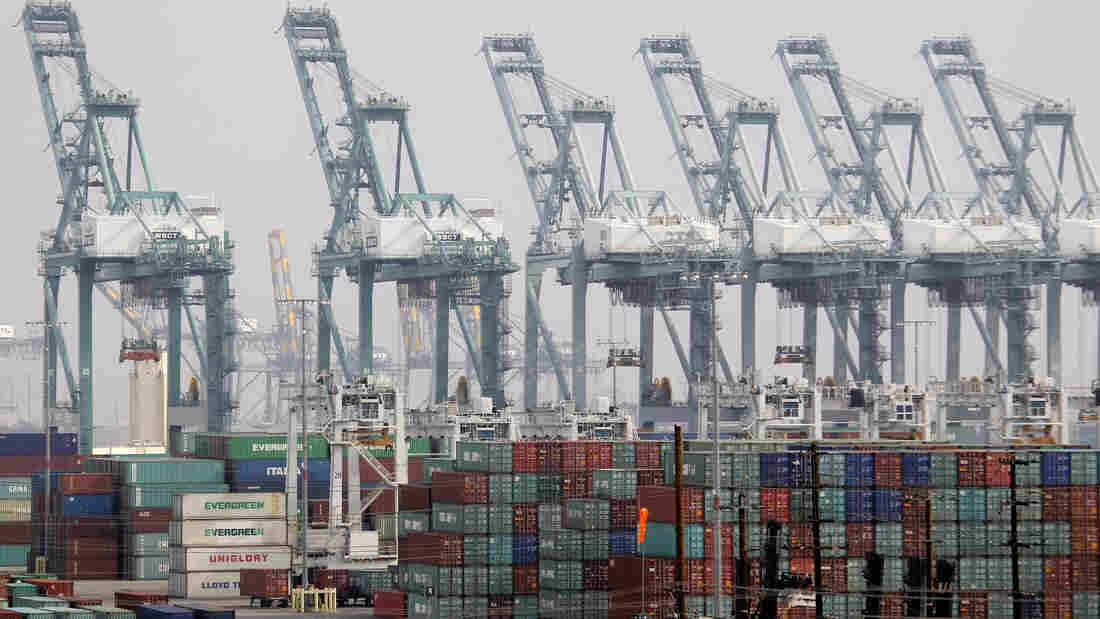 The Port of Los Angeles is the busiest port in North American, and it's where many merchant mariners bid for jobs. But a proposed change to the U.S. food aid program could mean shipping out less food to developing countries, and fewer jobs. Nick Ut/AP hide caption 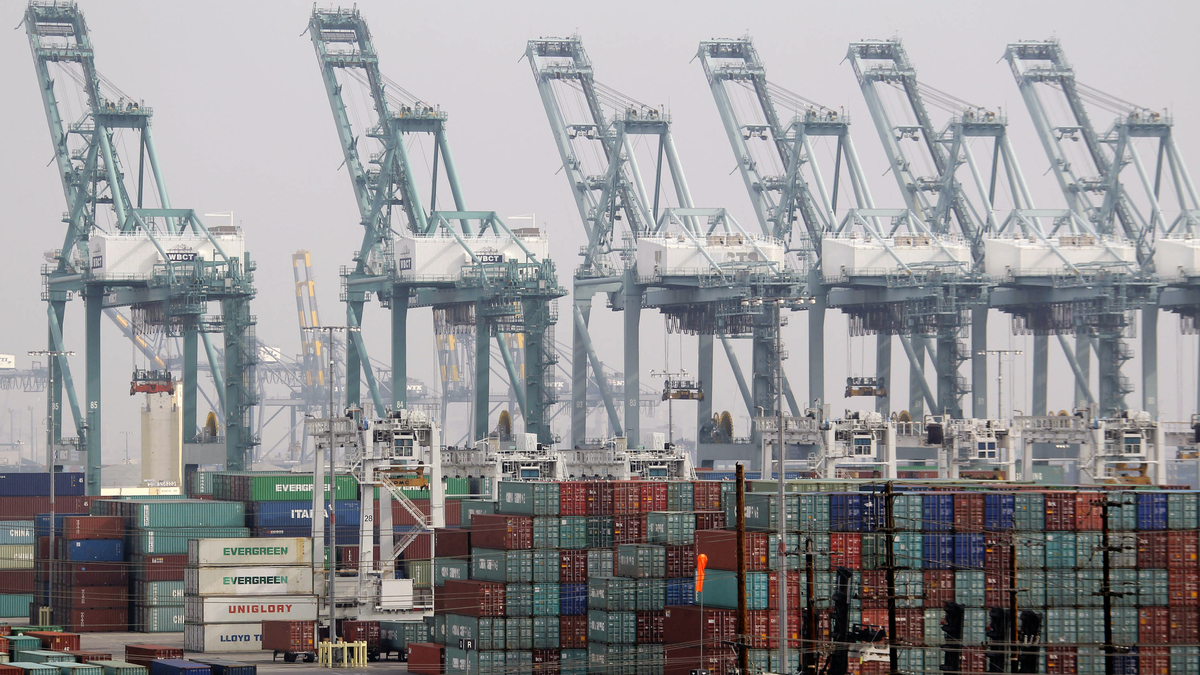 The Port of Los Angeles is the busiest port in North American, and it's where many merchant mariners bid for jobs. But a proposed change to the U.S. food aid program could mean shipping out less food to developing countries, and fewer jobs.

When it comes to shipping in the United States, there's a bit of a paradox. Even as U.S. exports have grown, the U.S. share of shipping has declined dramatically.

The traffic in and out of U.S. ports increases every year, but most of those ships fly foreign flags. In fact, the number of U.S. flagged ships is barely one quarter of what it was in the 1950s. That means fewer and fewer jobs for the men and women who work on those ships: the United States Merchant Marine.

Proposed changes in U.S. food aid now threaten even more jobs in a shipping industry that is already struggling to survive.

It is time for job call on a recent day at the International Organization of Masters, Mates, and Pilots in Long Beach, Calif. Los Angeles is the busiest port in North America, and Merchant Marines have gathered here to bid for jobs.

There's no long-term work available on this day, however, just fill-in shifts. Dave Boatner, a vice president of the union's Pacific ports, has seen the industry change a lot in his years as a merchant mariner.

"I graduated from Cal Maritime in 1978 and the company I worked for when I started working for them in 1978, they had 50 ships," Boatner tells NPR's Arun Rath. "Now they got four. So it's significantly reduced."

Boatner, who's retired from being a captain, is relatively removed from the changes in the industry. He's not out bidding for jobs at job call anymore. But for Liz Marconi, a 32-year-old 2nd mate, looking for a job is always on her mind.

"If you are adamant about your job, then you're going to come to the union hall every day for job call, because you never know what's going to happen," Marconi says. "With our jobs, someone in San Francisco could have a job opening. ... We start bidding, whoever is in the hall. I've gotten a job like that."

A job like that might last 40 or 50 days, sometimes sailing through dangerous waters. The short notice, the threats of pirates and storms, and the long stints away from home all take their toll on young mariners like Marconi.

At its best, being a mariner can be an amazing job. Captains make six figures, and young mariners like Marconi pick up leadership skills that can transfer to all sorts of opportunities.

"I'm hoping to make master someday, so [I'm] hoping the industry will stay alive to make that dream come true," she says.

But with fewer jobs available, it might be difficult for that dream to become a reality.

A Tough Time For Mariners

Over the past quarter-century, the Merchant Marine has hit one obstacle after another. Rising labor costs in the U.S. made U.S. mariners less competitive and environmental laws raised the cost for U.S.-flagged ships.

The past year has been especially tough. First, sequestration cuts threatened to cut off funding for the 80 ships that are currently supported by the U.S. military, which depends on the Merchant Marine to transport vital war supplies.

Now, a proposed change in the U.S. food aid programs threatens to further reduce funding. Currently, the U.S. government buys millions of dollars of food here in the U.S. and ships it abroad on American vessels.

Chris Barrett, who researches economics at Cornell University, says the U.S. food aid programs were created in 1954 to dispose of government-held commodity surpluses.

"It turned out that the main thing could really accomplish with food aid besides surplus disposal was humanitarian assistance," Barrett says. "It was a very effective vehicle for responding to emergencies that resulted from natural disasters."

Barrett says the proposed change would allow the United States Agency for International Development (USAID) to shop locally for food aid. It would be able to purchase up to 45 percent of food aid for developing countries in local markets. That would essentially divert purchases from the American market. And less food coming directly from the U.S. would mean less shipping for the Merchant Marines.

"Buying food locally is 30 to 50 percent cheaper," she says. "That means for the same amount of money you can reach a lot more hungry people. You can reach more families in need."

Rawe says that if all of the food aid changes are enacted, the aid could reach about 4 million more people — she has seen estimates as high as 10 million.

"These are people that are in dire need of assistance, that are facing a life and death situation every day," she says.

Rawe says there is flexibility in the proposals for cases where buying in a certain region doesn't make sense and actually could upset the local market. In those instances, USAID would continue to use U.S. farmers.

Shipping: The 'Invisible Industry' That Clothes And Feeds You

Why Is The Global Shipbuilding Business Struggling?

A Splash Of 'Urban Ocean' On A Southern California Cruise

Who Will Be Hurt Most?

As the proposals for buying food aid outside the U.S. move forward, economist Chris Barrett says that U.S. shippers stand to lose the most if it passes. He says the reason is pretty straightforward.

"If you start buying commodities in developing countries, there's no longer a need for the ocean freight service to move it from the U.S., and they're worried about the loss of business," he says.

If you talk to people from the shipping industry, they say the loss of business would be catastrophic, the nail in the coffin after a half-century of industry decline.

Lee Kincaid, the president of the American Maritime Congress, an advocacy group for the U.S. Merchant Marine, says the U.S. would potentially lose eight to 10 U.S.-flagged ships — as well as the jobs with those ships.

"Considering most merchant ships have two crews ... you're talking about 500 U.S. mariner jobs," he says.

But Barrett says the economics just don't support the food aid program as it now exists. If the industry can't do without government money, then it needs to remake itself for the modern economy. He says many of the vessels that are at risk are antiquated and no longer competitive.

"We're keeping a market open largely for the vessel owners," he says. "The mariners can get jobs on other ships."

Congress will resume debate the food aid proposals on Tuesday.