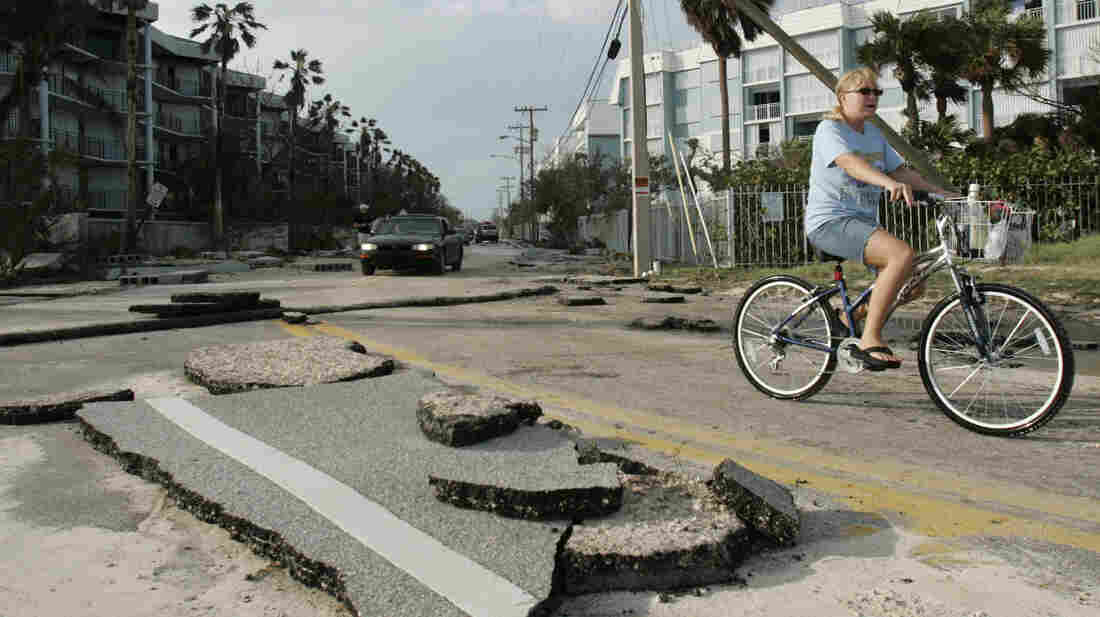 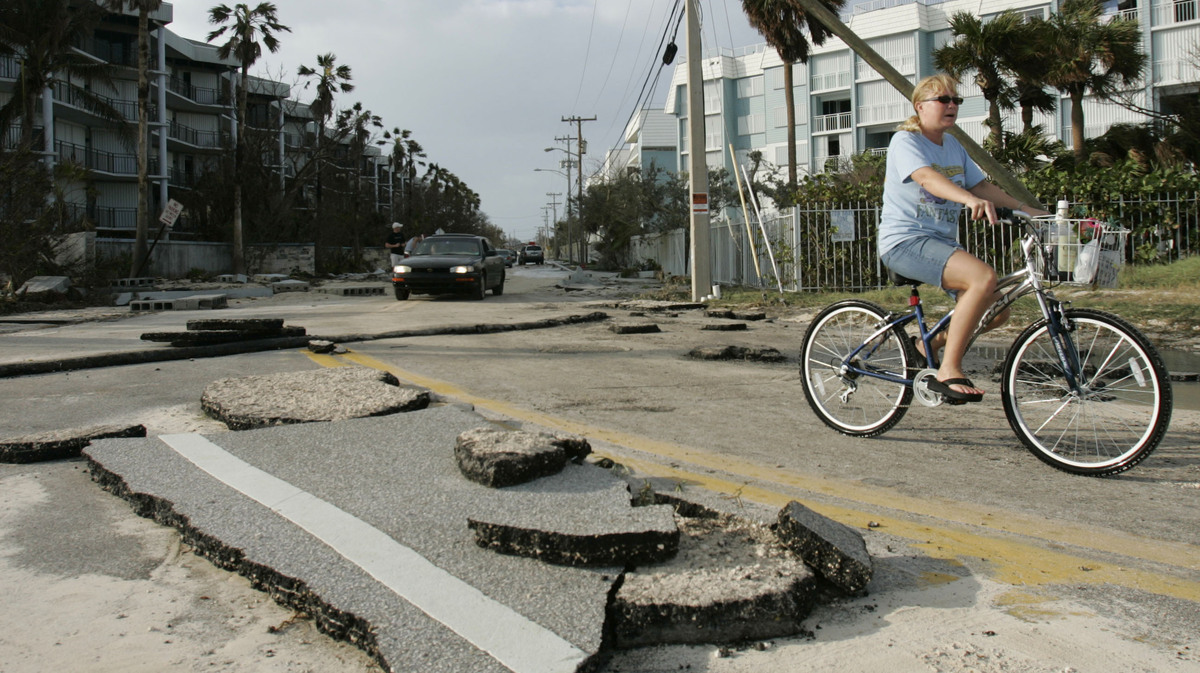 A cyclist rides past buckled asphalt in Key West, Fla., after Hurricane Wilma in 2005. Key West experienced widespread flooding with the storm surge.

Florida — especially South Florida — is very flat and very low, and in places like Miami Beach and Key West, buildings are just 3 feet above sea level. Scientists now say there may be a 3-foot rise in the world's oceans by the end of the century.

Under ordinances recently adopted in Key West, all new buildings will have to be raised at least a foot and a half higher than the old standard, use green building codes, and have large, freshwater cisterns. The water will be used in gardens, swimming pools and toilets. By collecting rainwater, cisterns help reduce flooding by keeping it out of the streets.

"We are connected to the mainland by a thin thread of U.S. 1 and a pipeline that travels 154 miles to South Florida for our water," says Donald Craig, the city's planning director. "We are, in all senses of the word, vulnerable to sea level rise."

Policymakers in Florida and around the country are starting to look at how they can best adapt to the threat of rising sea levels. Mayor Michael Bloomberg in New York has proposed a $20 billion plan to protect the city from increased storm surge and flooding that we'll see from climate change.

There will be infrastructure challenges, such as improving drainage, using pumps, raising roadways and buildings. And there will also be legal and political questions. How does a city decide which neighborhoods can be protected against sea level rise and which will have to be abandoned?

Also, what happens to property along the coast after it's inundated? Will the owner retain rights to rebuild? Can the land be mined for use as fill to elevate other areas along the shore?

In Key West, those who are planning for sea level rise say it's unlikely important historic and cultural areas will be abandoned. They point to Venice, Italy, as a likely model. Regular tidal flooding there has become a way of life for residents and visitors. It's a place where it's not unusual to see people wearing rubber boots, sitting in cafes where water laps around their feet.

Key West is in Monroe County. Three years ago, Monroe joined three other counties in South Florida to plan for the impact of climate change. Projections developed for the group say South Florida may see between a 3- and 7-inch sea level rise by 2020. By the year 2060, the counties are planning for a sea level rise of up to 2 feet.

Craig says exact numbers are hard to pin down. "We don't know whether that's going to be all at once, whether it's going to be 2 inches a year, but the reality is that sea level is going to rise. We have to plan for it, and this is one of the ways that we can do that," he says.

Key West's downtown tourist epicenter is also one of the island's lowest points. Alison Higgins, Key West's sustainability coordinator, is one of the people planning how the island will change to adapt to rising sea level.

It's not just a question for the future. Higgins says the town deals with it every month — during the full moon when the high tide pushes seawater up through the storm drains, flooding some streets. Rainwater recently lapped over the curb at a downtown CVS and flooded all the merchandise on the bottom floor.

Outside its front entrance, the drugstore now keeps a permanent stack of sandbags at the ready. To help stop the regular flooding, Key West is spending more than $4 million to install pumps and upgrade its drainage downtown.

But in other parts of town, Higgins says there's not an easy solution. In midtown, she says, there are some wood structures and a lot built from concrete block. "It was the cheaper way to build," she says.

It's one of the lowest-lying neighborhoods in Key West, just a few feet above sea level. It flooded during Hurricane Wilma in 2005, and, as the oceans rise, it will become more vulnerable to flooding from storm surge and even rainstorms. Because most houses are concrete block built on slabs, they're not easily elevated.

New federal flood insurance rates recently took effect have dramatically raised the premiums for many who live here. Chris Bergh with the Nature Conservancy says increasing the cost of living in paradise is one more impact of sea level rise.

"Part of the reason that property values are so high here is that it's been considered a desirable place to live. But, at some point with sea level rise, the risks associated with living near the ocean start to come into play and start to counteract those benefits," Bergh says.

Others in Key West though are more optimistic. Even under worst-case scenarios of a 3-foot rise by the end of the century, they say Key West will survive and even prosper.

"People will want to continue to live near the water," Craig says.

Craig says in Key West and other coastal areas, he thinks people and the communities they live in will adapt.

"They will recognize that they have to raise their houses. We will have to make adjustments in our roads," he says. "When you think about it, if the Dutch can adapt by having a series of barriers against the North Sea that they maintain at great expense, then we can adapt."

Key West also has something else in its favor. For nearly 200 years now, the U.S. Navy has had a major presence here. And rising seas or not, that's not expected to change.