Accessibility links
Dwindling Middle Class Has Repercussions For Small Towns As the U.S. recovers from the Great Recession, one fact that's emerging is that while jobs are coming back, most of these jobs are either high- or low-paying jobs. Middle-class jobs are not coming back, and it's evident in towns across the Midwest like Lincoln, Ill. 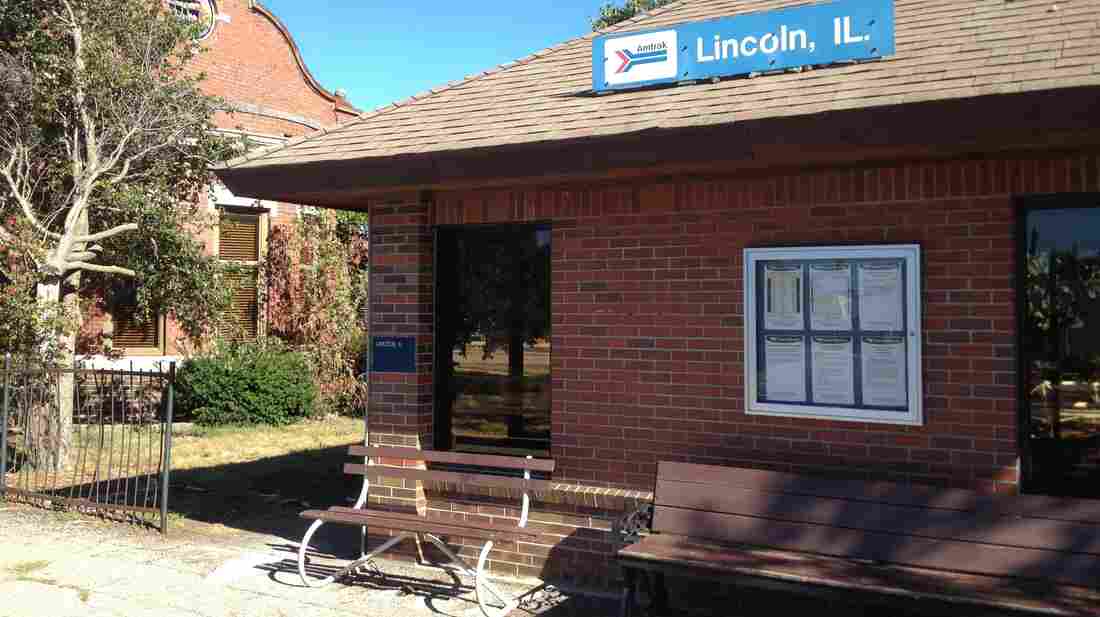 When reporter Kelly McEvers stepped off the train in Lincoln, Ill., she asked, "What happened to my hometown?" Kelly McEvers/NPR hide caption 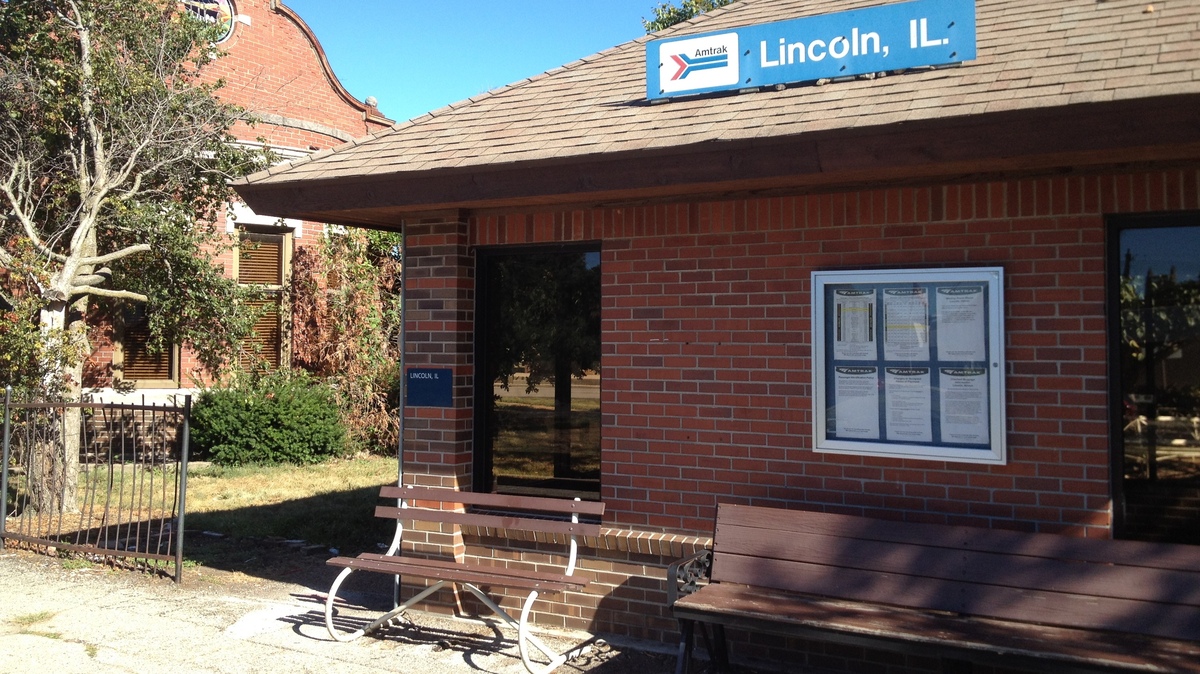 When reporter Kelly McEvers stepped off the train in Lincoln, Ill., she asked, "What happened to my hometown?"

My parents moved away from Lincoln, Ill., two decades ago, when I was in college. I hardly ever get back there. But my mom still works in Lincoln, and it was to Lincoln I headed to meet her this fall, after returning to the U.S. from the Middle East.

I got off the train from Chicago and immediately saw that the old depot building — where we used to go for fancy dinners before prom — was shuttered. A little monument commemorating the day Abraham Lincoln named the town in 1853 was faded and peeling. There was a man asleep on a bench at the train stop. He looked like he'd been there for days.

Driving around with my mom, I could not help but be struck by the question: What happened to Lincoln? I know this is a pretty common thought when people go back to their hometowns. But really, what happened?

I decided to find out for myself, to spend a week reporting in Lincoln.

It turns out that what's happening in Lincoln is happening in so many towns and communities across the country: As we recover from the Great Recession, jobs are coming back. But they are not middle-wage jobs — they are either high-wage jobs or low-wage jobs. The middle class is in serious decline. And that has all kinds of repercussions.

I started with Troy Brown, who went to grade school with my brother and is now a probation officer. He summed it up pretty well.

Brown has seen that change up close. While the crime rate in Lincoln is steady, it's drug-related offenses that are going up. And the drug of choice these days?

So much heroin, Brown says, there's an overdose every week. And that's in a town of just 14,000 people. A handful of people have even died.

State authorities say in towns like Lincoln, people get addicted to prescription drugs then turn to heroin when they can no longer afford the pills. They say the supply of heroin from Mexico has increased, and that's why it's cheap and available.

Brown says, sadly, heroin is keeping him in business.

"Lincoln has really plummeted to the point where I would love for our office to have cuts because there's no more crime," he said. "But we're so swamped, it's just the exact opposite. I mean, I hate to say it, but I have total job security here." 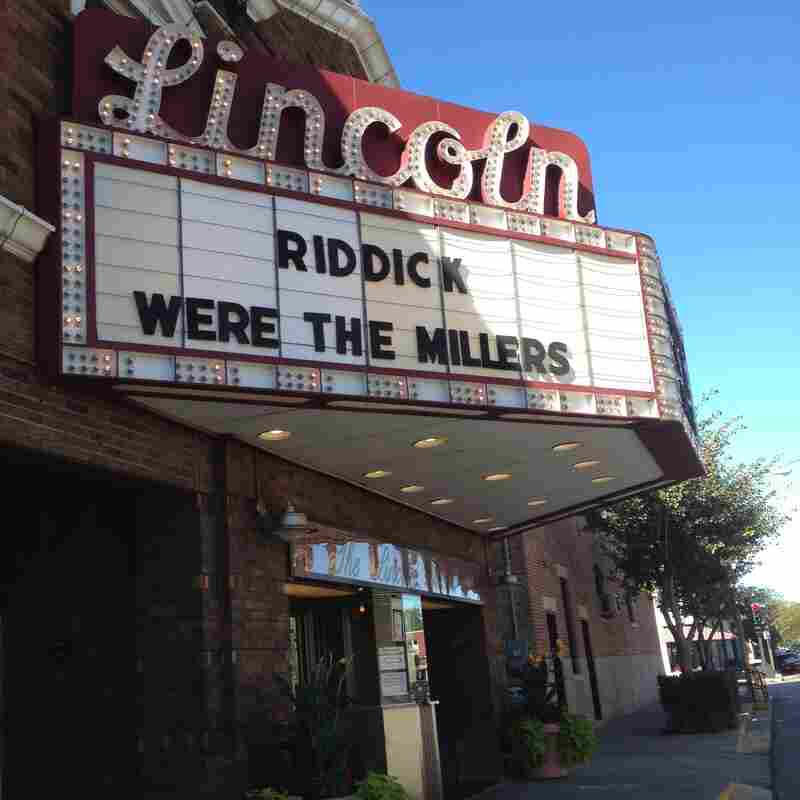 One of the bright spots in town: The movie theater, which is still open. Another is a robust volunteer program, a collaboration of churches, to help rebuild struggling properties. Kelly McEvers/NPR hide caption 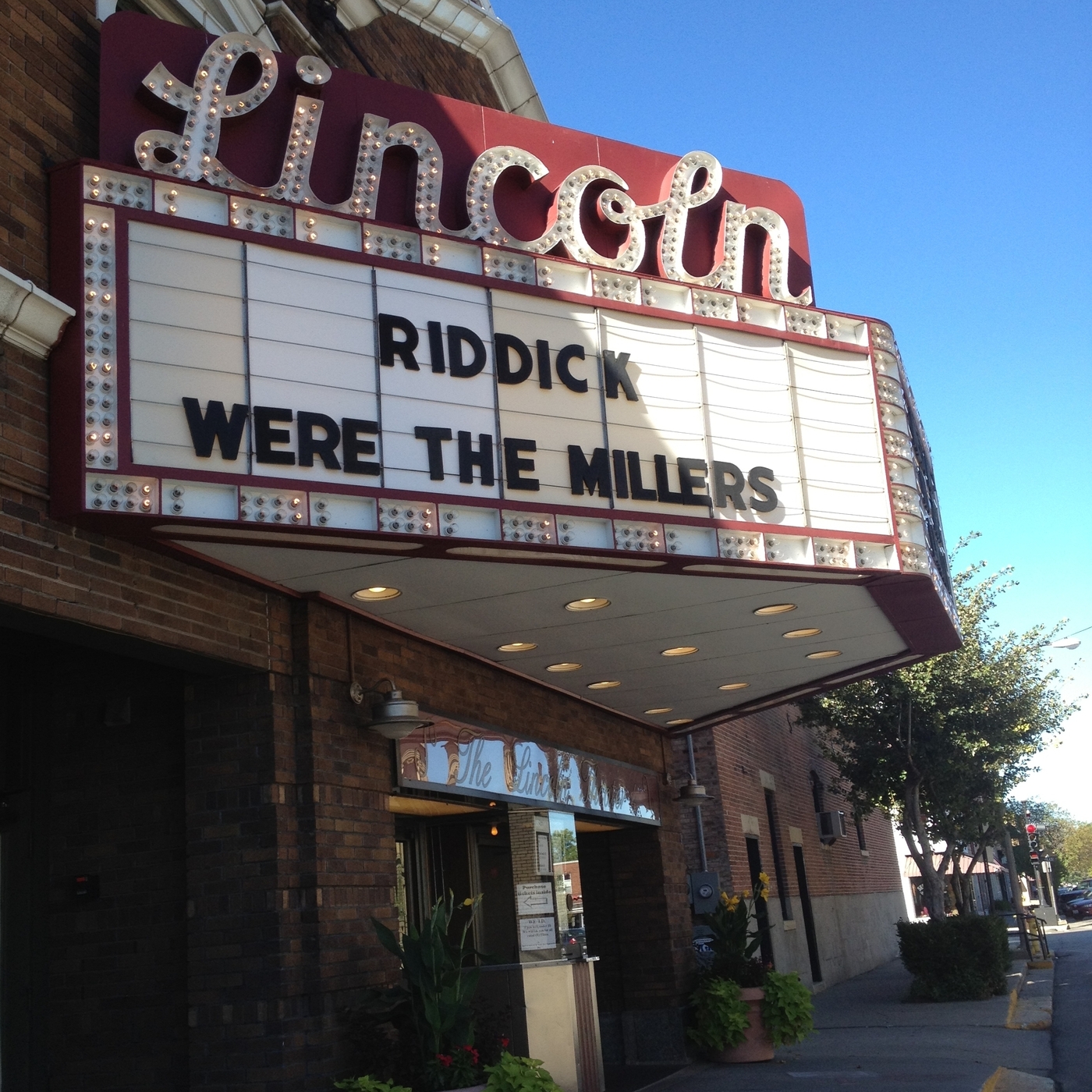 One of the bright spots in town: The movie theater, which is still open. Another is a robust volunteer program, a collaboration of churches, to help rebuild struggling properties.

Ken Greenslate is the chief of police in Lincoln. He says the town is not all bad.

He shows me the "new" part of town. It's just off Interstate 55, which connects Lincoln to Chicago, just a few hours north. Hotels, fast food restaurants, an assisted living facility and a warehouse for storing documents have all opened in recent years.

Schools asked the voters to pass a referendum imposing a sales tax for school capital programs, and the voters passed the referendum. And Lincoln recently got a grant to refurbish its downtown.

But like in so many towns across the Midwest, the population is shrinking and getting older. Factories have been closing since the '80s and '90s. One of the best government jobs in town, the state-run home for people with mental disabilities, was closed in 2002. Thousands of people lost their jobs.

Then came the Great Recession. Since then, the few factories that have managed to hang on in Lincoln have tended to hire temporary workers at lower wages with no benefits.

There is one new plant in town: a warehouse and distribution center for food products. But the jobs there are mainly stacking boxes or driving trucks. And the starting wages are $16 to $18 an hour — what economists say is barely a living wage.

This is the new reality that economists say is hitting so many communities across the U.S. Jobs are being created. But in Illinois and its neighboring states, the most jobs coming back are low-wage jobs.

In Lincoln, where unemployment is 8.4 percent — a point higher than the national average — the few middle class jobs left are in health care, teaching and prisons.

Before our tour is over, Greenslate gets a call.

Police have stopped two suspects with 15 pounds of marijuana they think came from Mexico. An informant tells police that more suspects are holed up in a migrant-worker motel down the street.

Greenslate barrels his SUV up to the motel and corners the two suspects.

"Do not move," he yells, grabbing his handcuffs and stepping out of the vehicle. "Let me see your hands. Hands! Hands!"

I watch as one suspect tries to get away but then relents. The other looks like he's about to cry.

Turns out the latter was carrying a duffel bag with another five pounds of pot. The intended buyer for these drugs, police later tell me, was a 14-year-old boy — from Lincoln.

The next day I meet Joe Plummer, one of my high school classmates, at the Steak 'n Shake out by the interstate.

Joe and his wife, Josie, have three teenage girls between them. They say they worry about the drugs and the crime in Lincoln. 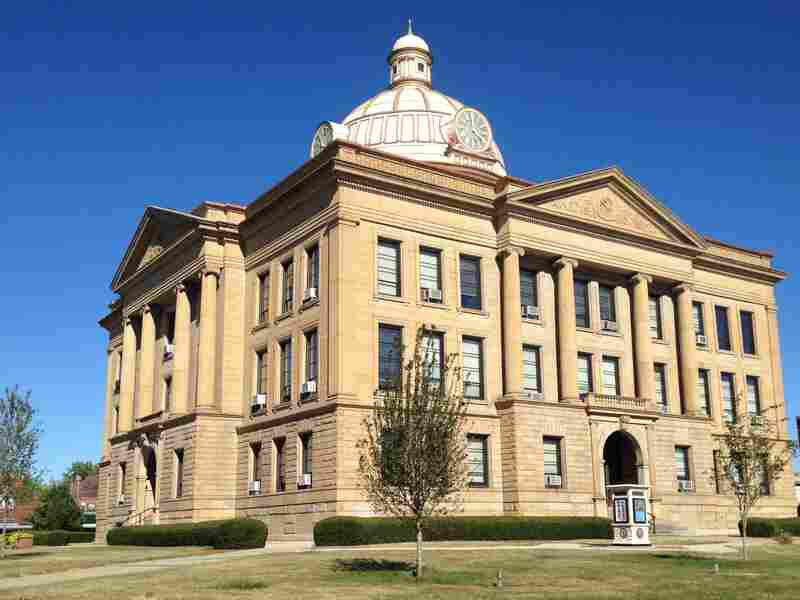 Built in 1905, this building replaced an earlier courthouse where Abraham Lincoln practiced law from 1847 to 1859. Kelly McEvers/NPR hide caption 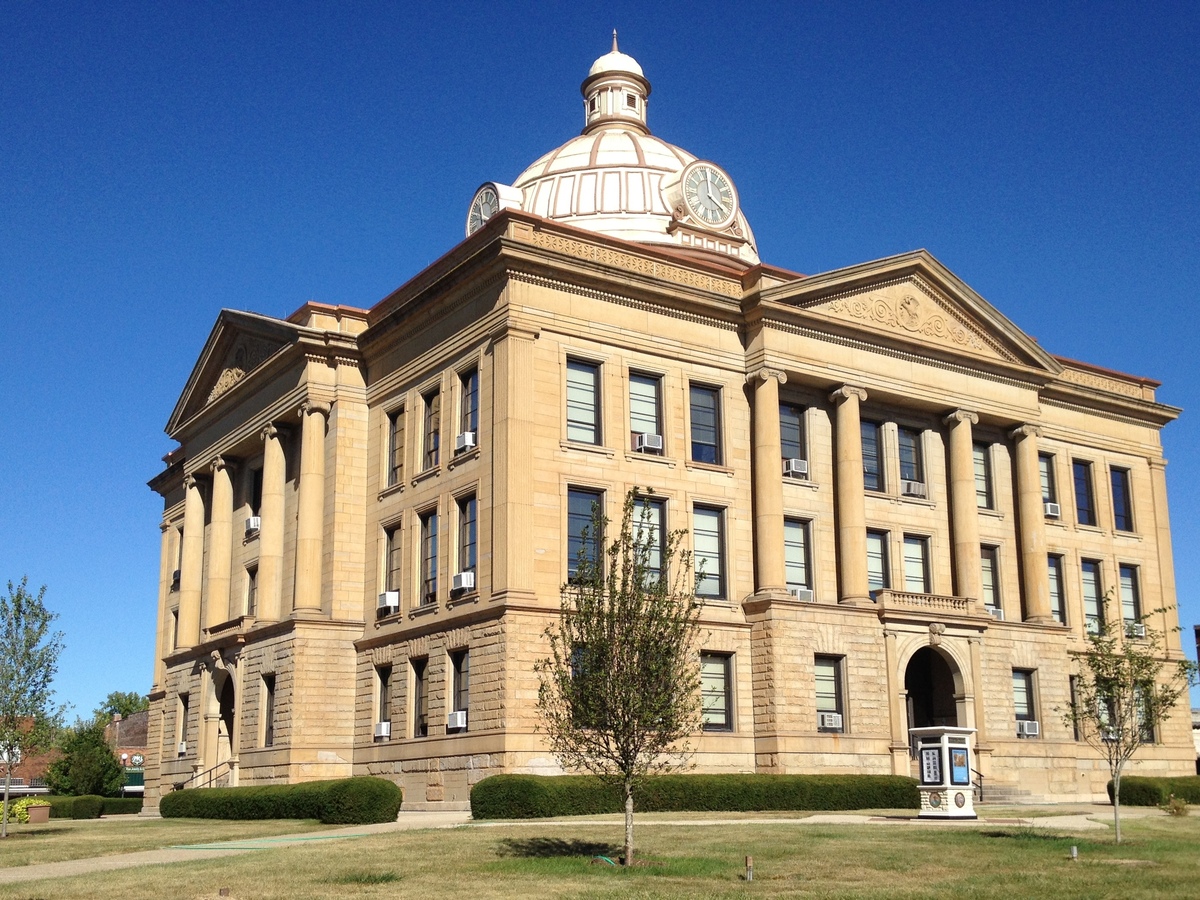 Built in 1905, this building replaced an earlier courthouse where Abraham Lincoln practiced law from 1847 to 1859.

I ask them how they try to keep their kids safe.

"We teach 'em how to shoot," Josie said.

"I have 35 guns in my house. Every one of my daughters, and my wife, know how to handle a weapon as well as anybody could handle one," Joe said.

Joe takes me to the firing range where he teaches his girls to shoot rifles like an AR-15 and an AK-47 that he keeps locked in a safe at home — and a handgun he keeps in his bedside table.

Richard Longworth, a fellow at the Chicago Council on Global Affairs, wrote a book about the struggling Midwest called Caught in the Middle: America's Heartland in the Age of Globalism. He says America's declining middle class means small towns are starting to have a lot more in common with crime-prone neighborhoods in big cities.

He also says towns like Lincoln need to realize this is not just about the recession. This is about a long, slow decline.

"The earth isn't going to open up and swallow them," he said. "They'll survive, but they'll be backwaters, getting ever more what you saw: shrinking in population, population older, young families not moving in, high school grads like yourself moving away to seek their fortune somewhere else."

Longworth says for communities to survive in this new reality, they'll have to reinvent themselves — try to keep the factory alive, attract people who are willing to work the lower-wage jobs.

Otherwise, what happens to towns like Lincoln will be just another episode in what he says is a major societal upheaval.

"I grew up in a middle-class America where we pretty much knew life was an escalator," he said. "You got on the bottom step, and if you behaved yourself, paid your dues, went to work, worked hard — you'd end up at the top of the escalator. And I think that escalator's broken now. It's a tougher scramble."

How to cover that upheaval, I ask?

"You've covered revolutions before," he said. "Treat it like just another damn revolution."

The audio of this story, as did a previous Web version, says the City Council increased the sales tax on businesses to renovate schools. In fact, the voters passed a referendum, requested by schools, imposing a sales tax for school programs.