Accessibility links
Philippine Expats In California Contribute To Typhoon Relief California is home to one of the largest Filipino immigrant communities in the United States. It's also the center of a large fundraising and outreach effort for victims of Typhoon Haiyan. 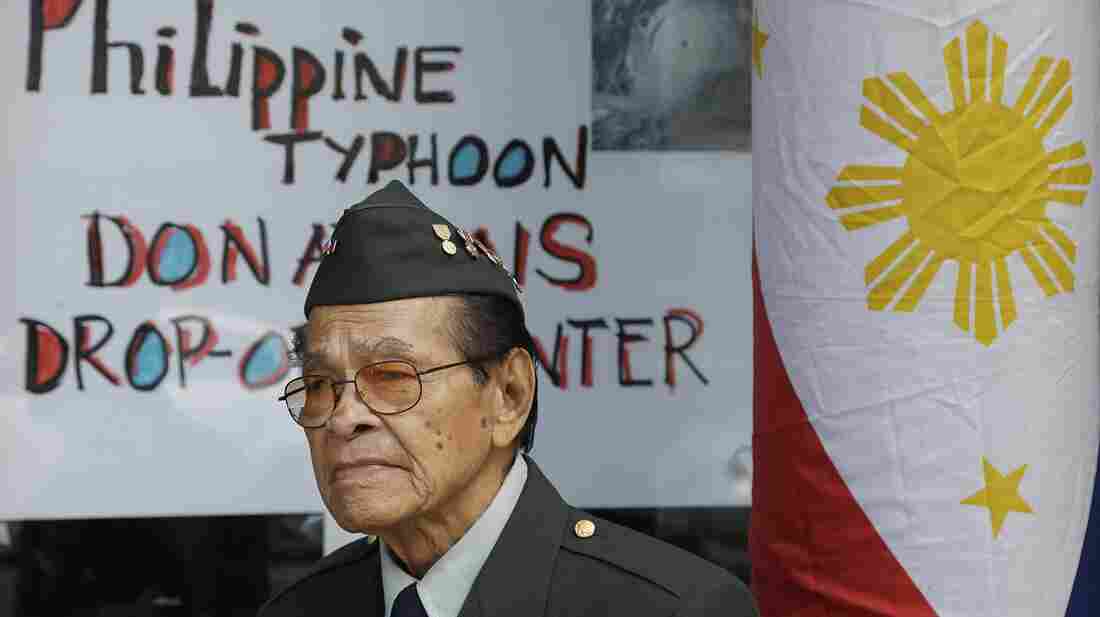 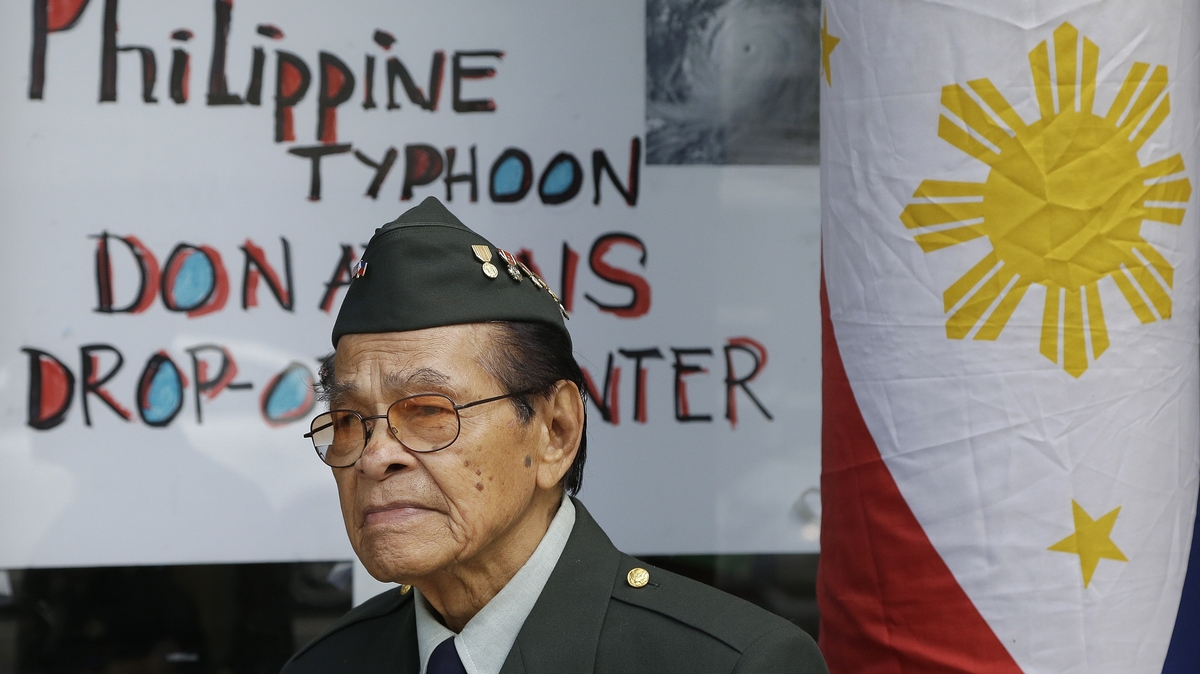 Former U.S. Army soldier Alfredo Carino stands at the door of the West Bay Pilipino Multi-Service Center in San Francisco while volunteering with other veterans to accept donations for victims of Typhoon Haiyan.

Many Filipinos living in the United States are frantically trying to get in touch with loved ones in some of the areas hardest hit by the typhoon. California, with about a million Filipino immigrants, is the center for a large fundraising effort.

Los Angeles is home to one of the largest concentrations of Filipino immigrants in the U.S. Many across this city are glued to the local Asian TV stations' nightly news broadcasts. Some are turning their worry and stress into action, pounding the pavement to raise money for typhoon victims.

Caren Mempin is clutching a can full of coins and dollar bills, going from table to table at a fast food franchise from the Philippines called Chow King. It's in a bustling shopping mall home to other Filipino chains and a massive supermarket in L.A.'s Eagle Rock neighborhood.

Her pitch isn't a hard one. The typhoon is on everyone's minds here, and everyone wants to help. Like Mempin, so many people know friends or family affected.

"I just talked to my mom, and they said that they're all OK, but we have also relatives from Tacloban, especially my mom's brothers and sisters — they don't have any response, so we're still waiting for that," she says.

Mempin was born in Tacloban, one of the hardest-hit cities. "I'm always keeping in touch with my mom. She's always crying about that, because my mom is very close to her family."

The first wave of immigrants to come in droves in the 1930s settled in the Los Angeles area in what's now called Historic Filipinotown, about 6 miles south of the shopping mall, as the crow flies.

On Union Avenue is the modest but well-kept Filipino Christian Church, the oldest Filipino church in the city. It's not much bigger than the apartment buildings it shares this quiet block with. Upstairs, in a small room, there are black trash bags full of donated clothes and other supplies.

Pastor Einstein Cabalteja says they've raised close to $800 so far through the rummage sales and online donations to the church's website.

"We are not very rich, and we are not a very big congregation. We have on average 60 on a regular Sunday," he says, "but I believe our hearts are big."

Cabalteja, who came to the U.S. and this church in 2006, says his heart aches. He wishes he could hand-deliver these things.

"Here in America, we enjoy a lot of good things, but back there, there are less fortunate people. I wish, I wish I could be there," he says.

For now, relief organizations say what's needed most is cash. Shipping food and other supplies is expensive, and there's no guarantee they'll land in the right people's hands.

Alex Montances, of the National Alliance for Filipino Concerns, says as of late Monday, the group had raised about $50,000 for relief. Inspiring, he says.

"In Filipino, we call it 'Bayanihan,' and it's like a sense of Filipinos like, the community coming together to help one another. So there's really a sense of Bayanihan spirit I think among the Filipino community here in this area," he says.

Back at the shopping mall in Eagle Rock, people came to swap stories and check in with friends to see if they'd heard any more news.

For fundraiser Mempin, no word yet on her extended family in Tacloban.

"Hopefully they're OK, because it's so sad when we cannot see and contact them," she says.

For now, while she waits, Mempin says she's praying.