Accessibility links
How A Free Bus Shuttle Helped Make A Small Town Take Off Emery Go Round is a free shuttle, provided by businesses in Emeryville, Calif. Not only did the popular shuttle help solve one of the most annoying problems for transportation planners known as the last mile, it helped the city reinvent itself as a home to headquarters for Pixar, Jamba Juice and Peet's Coffee. 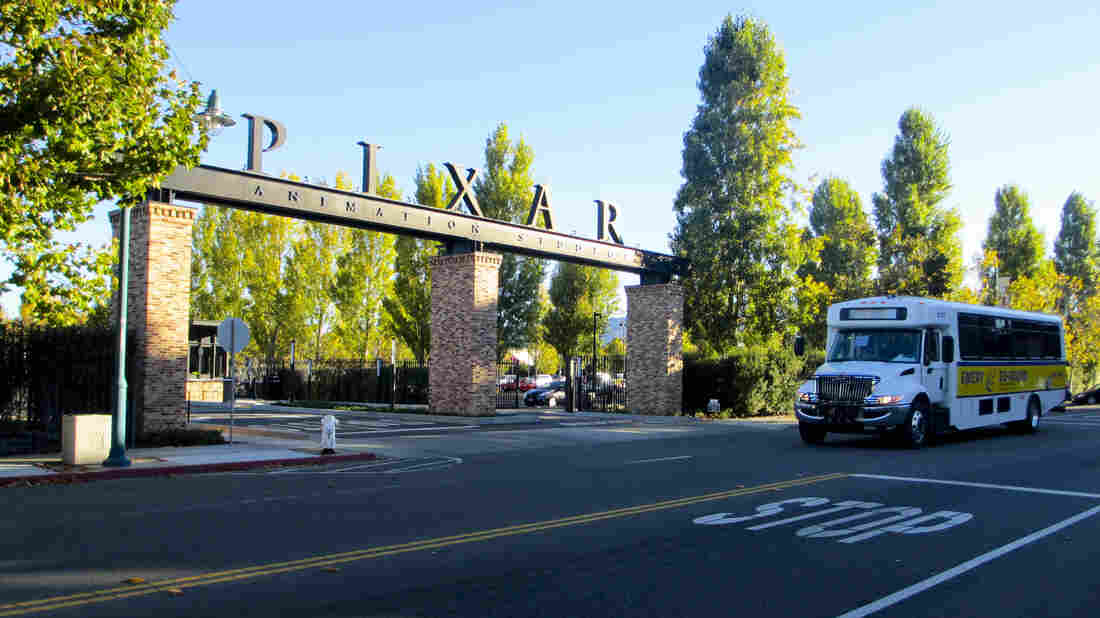 Pixar Animation Studios is one of the commercial property owners that funds the Emery Go Round. Many of Pixar's employees get off a Bay Area Rapid Transit stop in nearby Oakland and take the Emery Go Round to the Pixar complex in Emeryville. Cindy Carpien/NPR hide caption 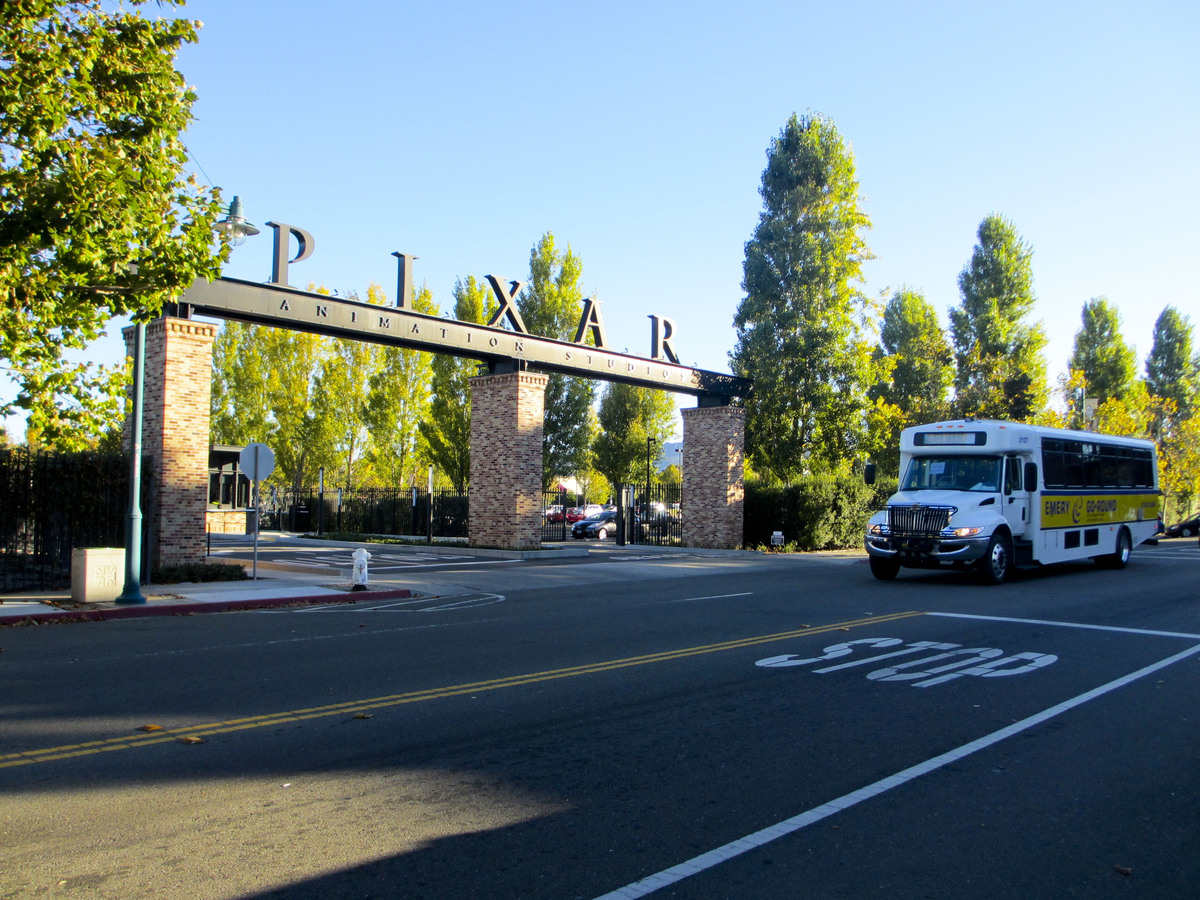 Pixar Animation Studios is one of the commercial property owners that funds the Emery Go Round. Many of Pixar's employees get off a Bay Area Rapid Transit stop in nearby Oakland and take the Emery Go Round to the Pixar complex in Emeryville.

This story is part of an ongoing project on commuting in America.

What's known as the "last mile" of a commute can be the Holy Grail for many city transportation planners. How do you get people from their major mode of transportation – like a train station – to their final destination?

Perhaps your last mile is a drive home from a subway or train station — but these days, many cities and towns are trying to eliminate cars as much as possible. Some are planning for streetcars to take commuters on that last leg. Others rely on buses. In Emeryville, Calif., 10 miles east of San Francisco, the local businesses helped reinvent the city by providing a free shuttle service as a solution to this last mile problem.

The Emery Go Round Story

Emeryville is now the headquarters of Pixar Animation Studios, Leap Frog, Jamba Juice, Peet's Coffee and numerous biotech companies. But in the 1960s, it was a small industrial town known for paint factories, scrap metal yards and tanneries. By the late 1980s, though, post-industrial Emeryville was in pitiful shape, and John Flores was hired as the new city manager.

"They tasked me with redeveloping the city," he says. "Forty percent of the land was vacant, and there was a lot of opportunity there."

Emeryville was ideally situated to attract new business, but looking down the road, Flores could anticipate all of the traffic that would come with it. So he offered to help consolidate the few private shuttles that were already operating in town. Some city and federal dollars would pay half, the businesses would pay the rest. 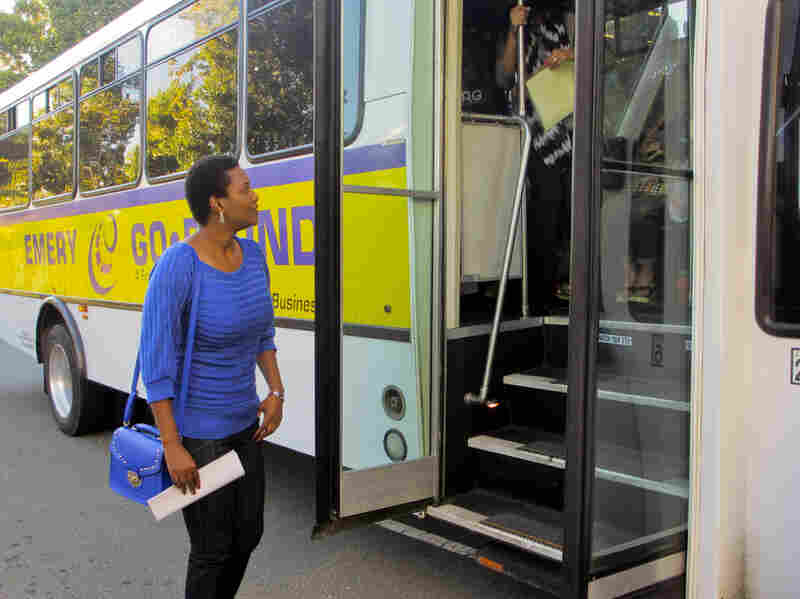 There were 1.5 million boardings on the Emery Go Round last year. Zikhona Tetana, a visiting scientist from South Africa, is taking the Emery Go Round to a Lawrence Berkeley National Laboratory facility in Emeryville. "It's convenient and always on time," she says. Cindy Carpien/NPR hide caption 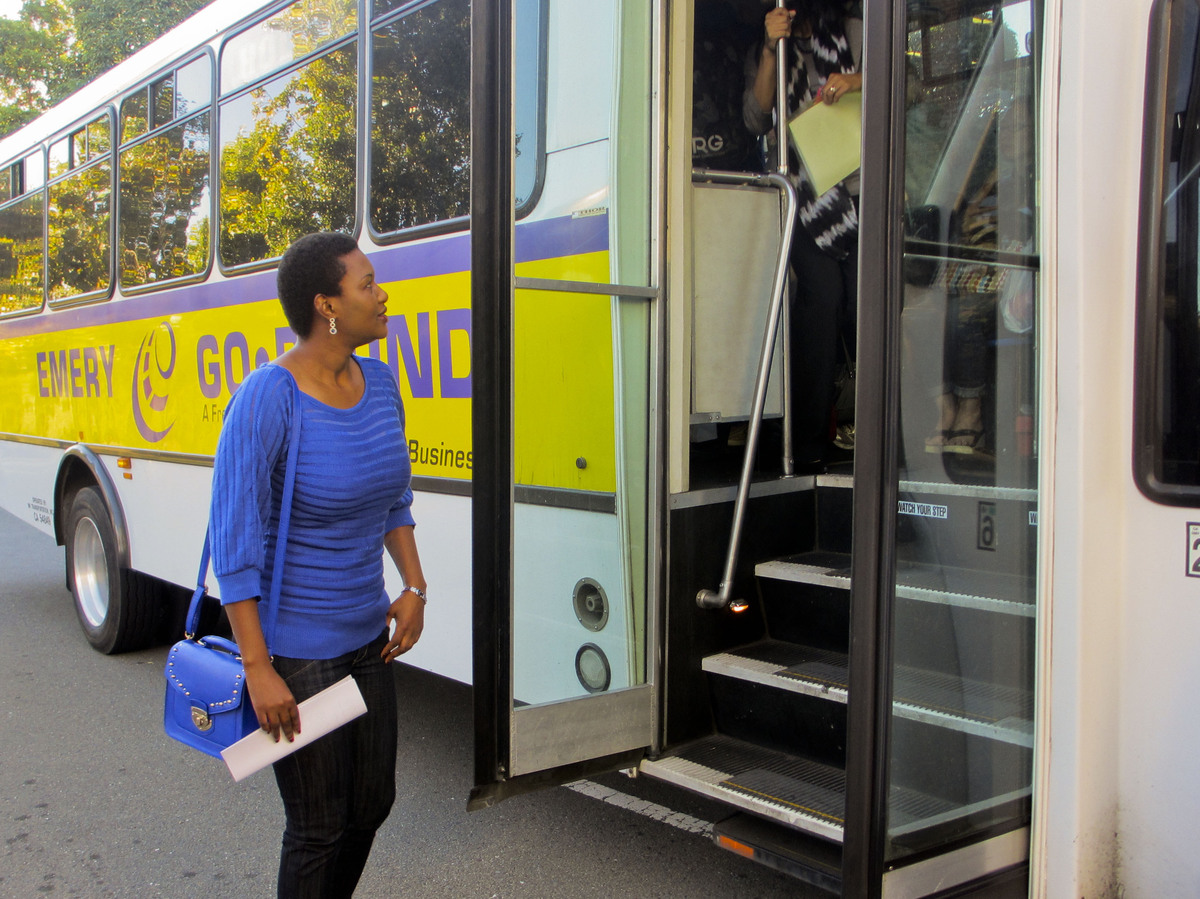 There were 1.5 million boardings on the Emery Go Round last year. Zikhona Tetana, a visiting scientist from South Africa, is taking the Emery Go Round to a Lawrence Berkeley National Laboratory facility in Emeryville. "It's convenient and always on time," she says.

Rich Robbins was and still is a commercial property owner in town.

"It was a no brainer," Robbins says. "The only way we were going to solve the problems of the day was to get people out of cars."

But not everyone thought it was a no-brainer. Robbins had to convince some of the old guard business owners to go along with the plan. One was Pierce Lathrop, who was required by the city to run a shuttle for his office complex.

"He was this crusty critter, "Robbins says. "We persuaded old man Lathrop on a trial basis that if we brought reliability [and] kept complaints to a minimum, he would stay on long term. He gave us one year."

It didn't take nearly that long for the Emery Go Round shuttle — which began running in 1995 — to exceed expectations.

"Initially, the shuttle was carrying 300 people a day," Flores says. "Within approximately six months, that amount went up to 3,000 people a day."

But what made the Emery Go Round really succeed was the decision by the business property owners to form what's known as an improvement district. It meant the shuttle would be funded entirely by businesses taxing themselves.

"Emeryville was absolutely an early adopter of using business improvement districts to support transportation," says David Downey, president of the International Downtown Association, which provides support for these districts across the country. They're more common around the country for augmenting city services like sidewalk sweeping and park maintenance.

The business improvement districts, Downey predicts, are going to continue to become "increasingly important through these austere times."

More On The Last Mile

Karen Hemphill, assistant to Emeryville's city manager, says the city couldn't have grown without the Emery Go Round. "We have major corporations here and without the shuttle, I don't think that development would have come," she says.

An Eye On Ridership

In the morning, Emery Go Round buses are full of rush hour commuters like Sarah Wildfang. Wildfang is graphic designer for Title Nine, a women's sporting apparel store, also headquartered in Emeryville. She begins her commute on a city bus in San Francisco, where she lives, and then a Bay Area Rapid Transit train to Oakland. Once there, an Emery Go Round takes her right by her office. If she didn't have this bus?

"Oh, gosh," she says. "I'd just have to do some research and figure it out. I'm really dependent on this, and I rely on it, and I'm very thankful for it."

"I do believe it's a template particularly in smaller towns where you have limited parking and your downtowns are dying, and [you] move people seamlessly around the area," Robbins says.

And it's not just commuters who benefit. The shuttle was expanded to run on weekends and to shopping areas. Last year, there were 1.5 million boardings on the Emery Go Round. But Hemphill is concerned.

"The buses are full, the buses are at capacity," Hemphill says. "If you don't keep growing, then you start having the same kind of downward spiraling circle that many mass transit operators have — demand goes up, costs go up, you can't cover those costs, you start cutting back service, you start losing ridership."

Hemphill says discussions are just starting on whether the city might have to eventually supplement the shuttle's funding.

At the end of the workday, passengers jump off the Emery Go Round and rush through the BART station turnstiles. Many face another last mile to get back home. Commuter Tim Means says he wishes there was a service like the Emery Go Round on the home leg of his trip to a suburb of San Francisco.

"My last mile going home is in a car. If there was an Emery Go Round-like service then I wouldn't have to call and get picked up at the BART station. I'd be able to hop on that and head straight home," Means says.

One city that's looking right now to Emeryville for inspiration is the Silicon Valley city of Mountain View, home to Google and Intuit. It's announced plans for a free shuttle service similar to the Emery Go Round. But what works in Emeryville may not work everywhere. And questions like who rides and who pays are ultimately local decisions.

This story should have made clear that Emeryville, Calif., business property owners eventually took over funding authority for the shuttle service.