Accessibility links
As Climate Warms American West, Iconic Trout In Jeopardy In the northern Rockies of Montana, wildlife is a part of daily conversation. Fishing alone generates $250 million a year, and the pursuit of trout brings in most of that money. But record droughts and declining snowpack mean streams are becoming less habitable for this revered fish. 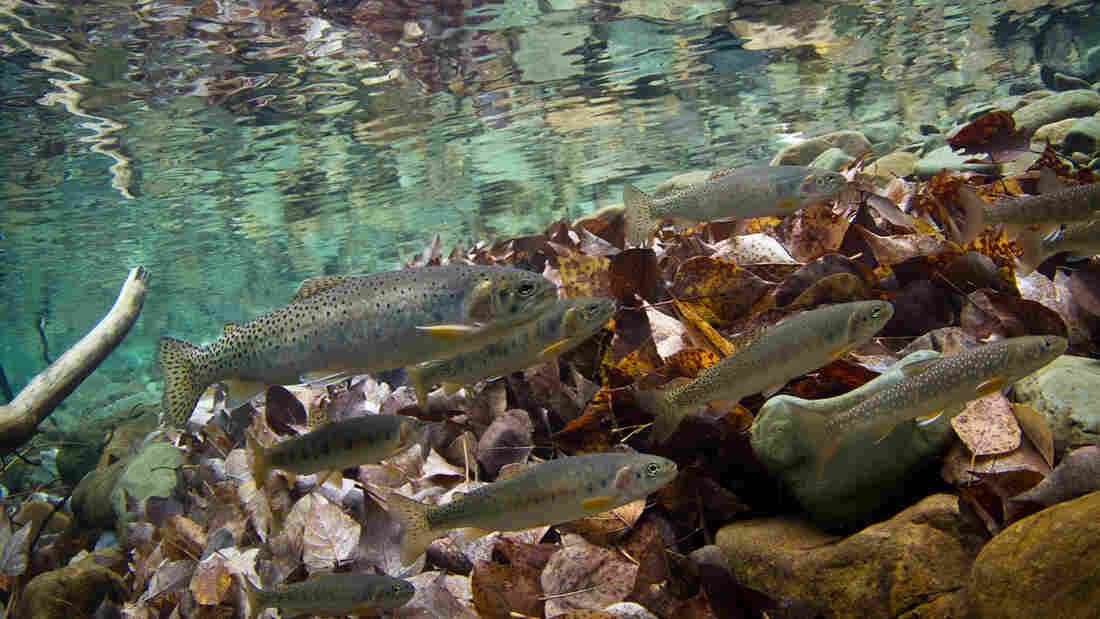 In the mountain streams of the American West, the trout rules. People don't just catch this fish; they honor it. And spend lots of money pursuing it.

But some western trout may be in trouble. Rivers and streams are getting warmer and there's often less water in them. Scientists suspect a changing climate is threatening this iconic fish.

I joined two such scientists from the U.S. Geological Survey as they drove up a mountain road in Montana, in the northern Rockies, a place dense with stands of Douglas fir and aspen trees and braided with mountain streams.

Here, wildlife is part of daily conversation. "I shot an elk maybe like three miles up that drainage," says Clint Muhlfeld as he negotiates a narrow dirt road. He and fellow fish scientist Robert Al Chokhachy trade hunting stories to pass the time as we climb higher toward a trout stream they're studying. Today it's not elk they're looking for, but native cutthroat trout.

They're studying the trout's world, which is changing radically as the climate warms. The region has seen record droughts and declining winter snowpack, which means measly stream flow after the spring melt. The water is also warmer these days in the streams. 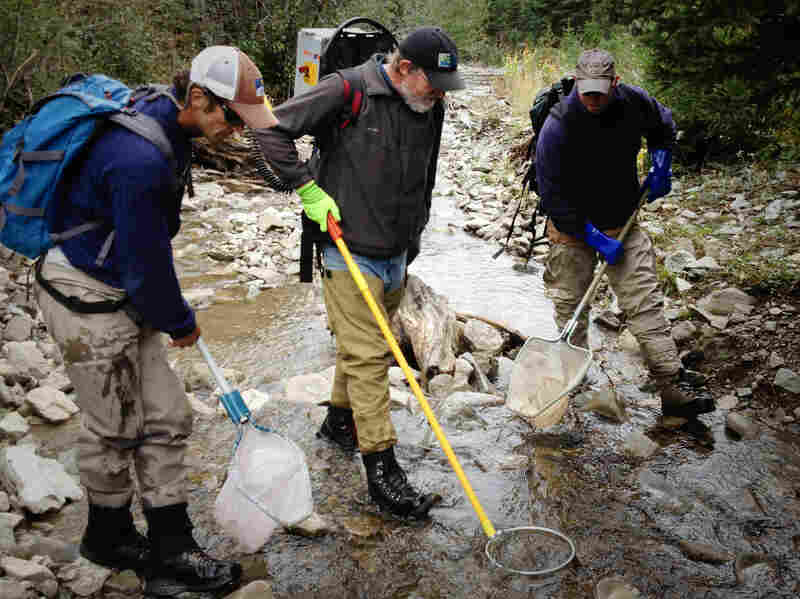 From left, Robert Al Chokhachy, Brad Shepard and Scott Opitz lure trout to their nets with a pole that uses a mild electric current to attract the fish. Christopher Joyce/NPR hide caption 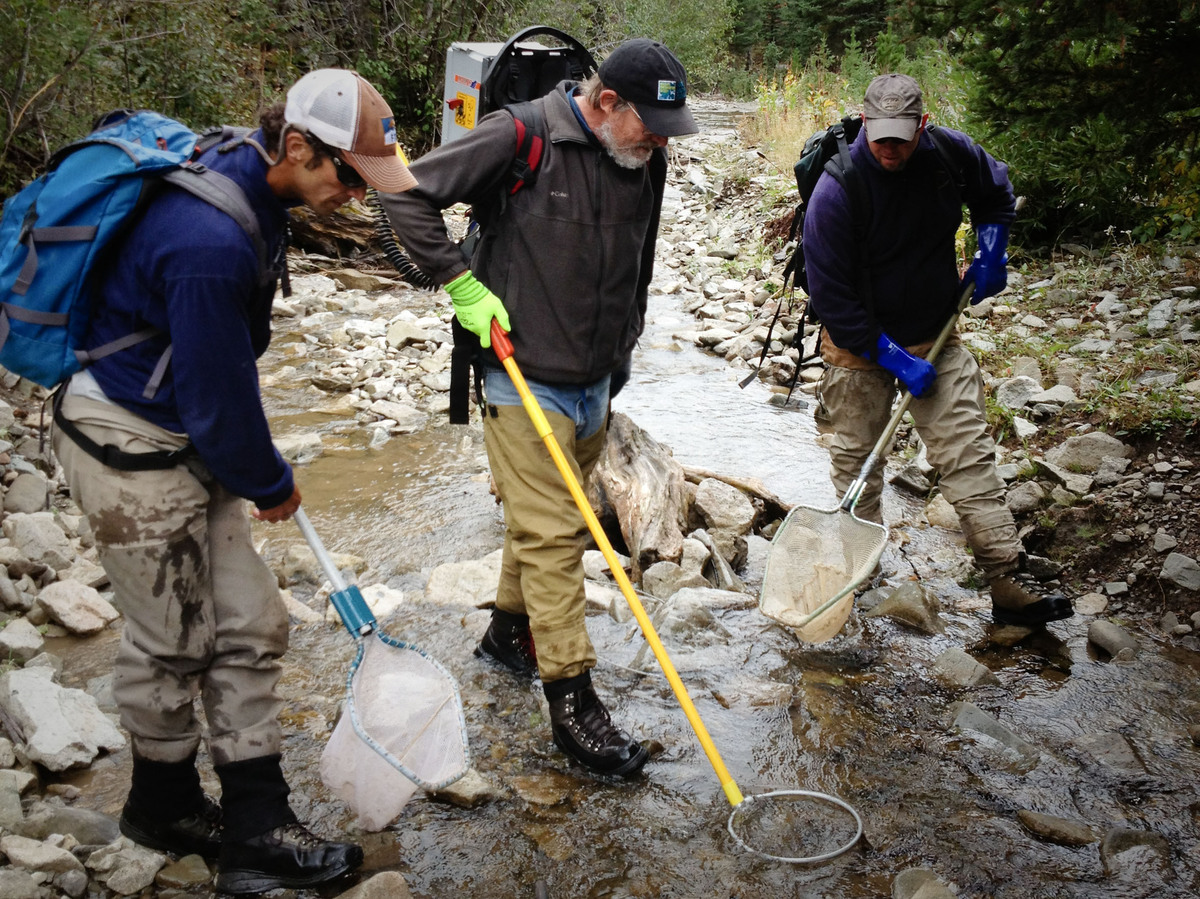 From left, Robert Al Chokhachy, Brad Shepard and Scott Opitz lure trout to their nets with a pole that uses a mild electric current to attract the fish.

To understand what that means to a trout, the scientists get in the water with them. We stop by a tiny creek, whose waters eventually end up in the Yellowstone River, and struggle into hip boots as Chokhachy explains how it's done. "We're going to be using electricity to shock fish," he says. "And then we capture them and we put in these little individual tags."

The tag is a tiny transmitter known as a pit tag, about half the size of a match-stick. They put them inside each fish they catch. Then the fish go back into the stream. "What we're trying to do is look at the specific effects of climate on cutthroat trout in one of their northernmost strongholds," says Chokhachy.

It's a speckled, cold water fish with iridescent gold and pink skin. The young ones here are just three inches long but they'll grow to a foot or more. Fishing in Montana generates about $250 million a year and the majority of that is from trout. And yes, they taste great. Mild and a little earthy.

These scientists will track and re-catch these fish for years, following their lives, their growth rate, mortality rate, even how they die.

"You'll find your tags in coyote scat," says Muhlfeld, "off to the side of the river, it's kinda cool." Also in the dens of martens, a local mammal and fish predator. They've even found tags in fish in peoples' freezers.

We wade into Dugout Creek. It's a foot-deep and cold and clear as glass. Native trout begin life here.

Brad Shepard of the Wildlife Conservation Society wears a power pack on his back that's wired to metal pole. "We put a current in the water," he explains. "It actually draws fish. Many people think it kills fish. It doesn't." Their attraction to the current draws them out of hiding and makes them easier to net. "All right," he says as he wades in, "ready to rock and roll?"

Shepard sticks the pole in the water. The power pack beeps. I wonder how close I can get to the pole before I get shocked. "If you're wearing boots you're fine," Shepard assures me. "But I'll let you put your hand in if you want the full experience." 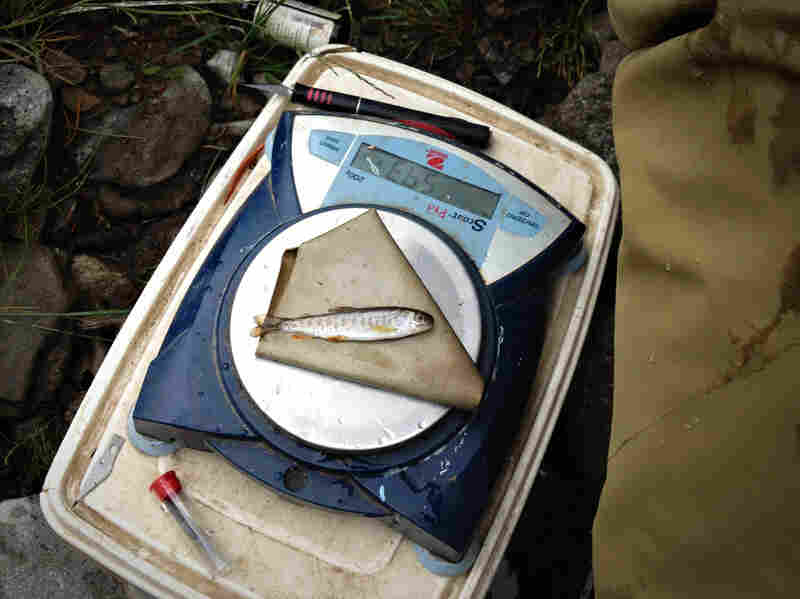 After each fish is measured and weighed a tiny slit is cut in the belly to insert a tag. Christopher Joyce/NPR hide caption 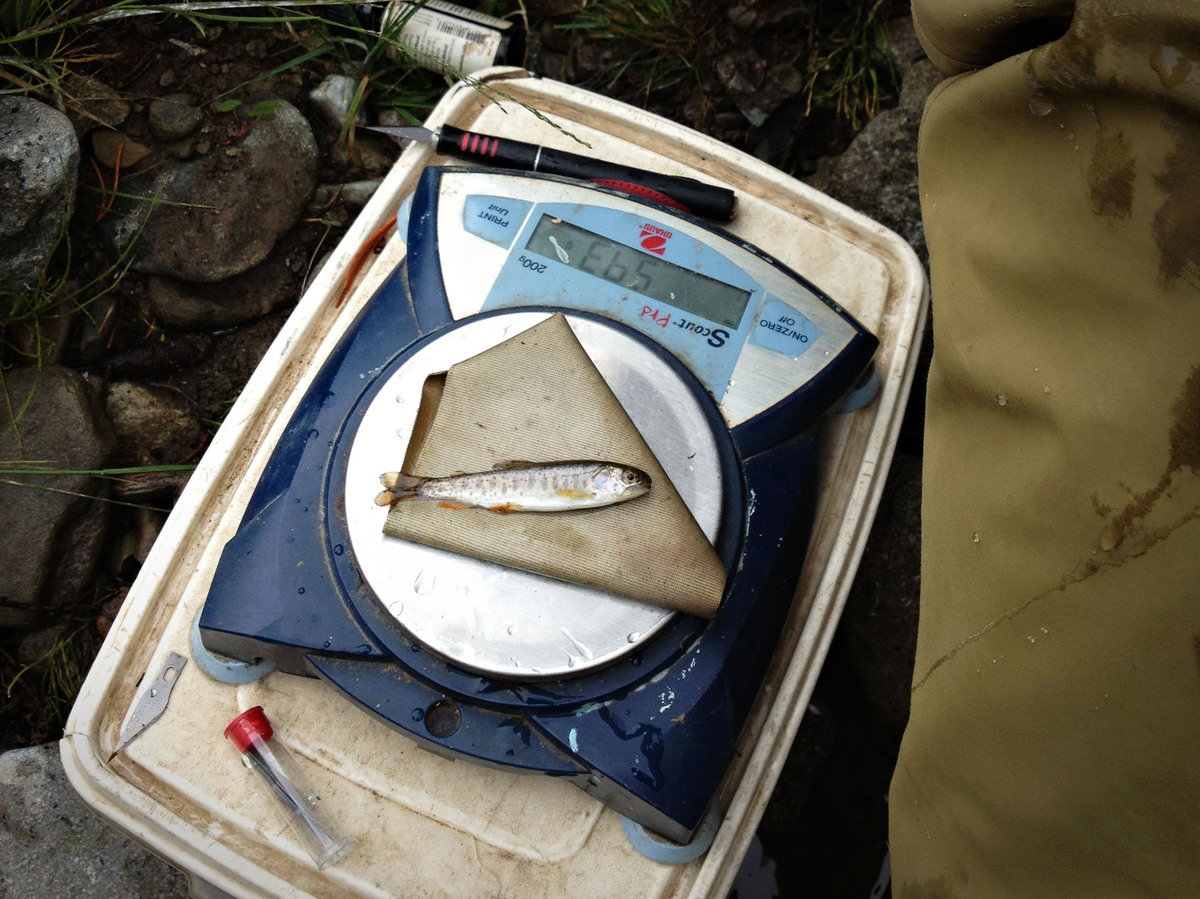 After each fish is measured and weighed a tiny slit is cut in the belly to insert a tag.

I decide to leave that to the fish, which indeed do come as if called. The crew nets them and identifies the species. They're mostly cutthroat. Once they've filled three buckets with fish, the team sits down to do a little ichthyological surgery. Shepard measures and weighs each fish, then cuts a tiny slit in its belly and inserts a tag. Each tag has a numerical code that can be read electronically. They place sensors in the stream bed that will recognize each fish as it swims by. Once the fish are back in the stream, the incision heals quickly and the fish are no worse for wear.

Over time, the team will watch to see if changes in stream flow and water temperature affect these fish. "Flow and temperature control essentially everything the trout do," Shepard explains. "It cues when they spawn, when they hatch, when they emerge, when they come out, how fast they grow, where they go. But as you shift things in one direction, you can in fact lose part of the population."

Understanding how this will all work out will take time. But already, changes have cropped up. For example, non-native fish that have been introduced in the West — like rainbow trout — normally live farther downstream where the water is warmer. Now they're moving up into higher streams. When they get there, they breed with the native cutthroat.

Clint Muhlfeld says new research he's done suggests that making hybrids may not be a good thing. "What we found is that as you allow hybridization to progress in fish you actually see a rapid decrease in fitness," he says. "That's not a good thing for trout." Also, bass are moving into waters that were once too cold for them, the kind of water the trout prefer. The bass prey on the young trout.

There are many things that disturb trout, which are picky about how and where they live. But so far the state and the fishing community have been able to reconcile cattle grazing, development and mining with the needs of trout. But climate change raises a big new threat and it's hard to fathom how it might affect trout. Thus the effort now to look for the first signs of trouble, not only for the sake of the creature, but for all those people who regard it as the iconic fish of the American West.