Accessibility links
Old Dogs, New Data: Canines May Have Been Domesticated In Europe A study of DNA extracted from wolf and dog fossils suggests that ancient wolf populations in Europe are the direct ancestors of most modern-day domestic dogs. The study suggests wolves became dogs between 18,800 and 32,100 years ago, before the start of agriculture. 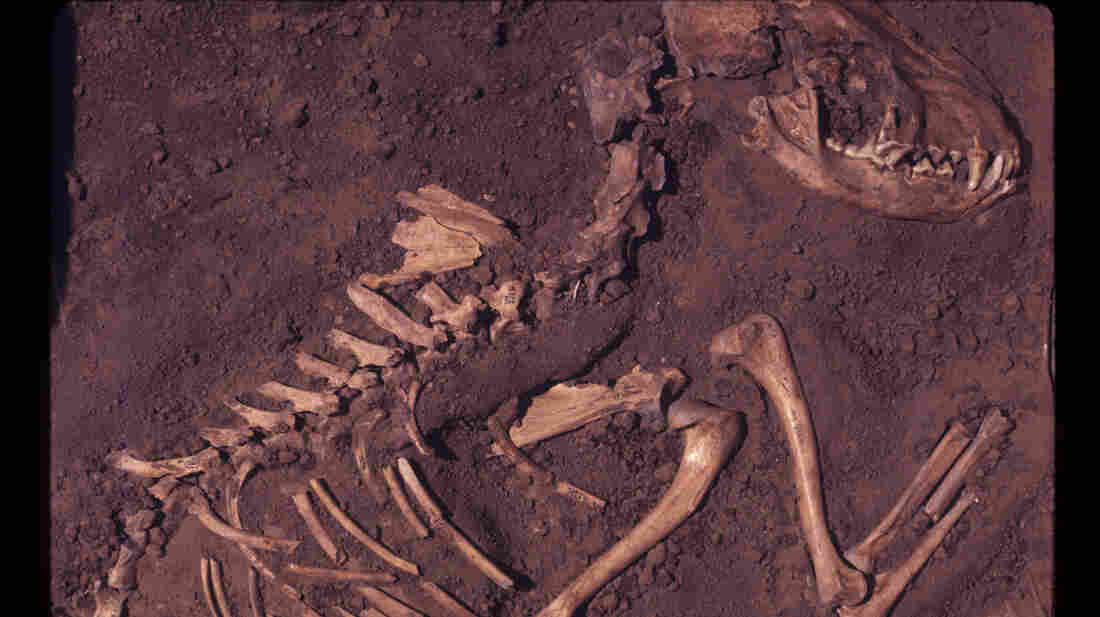 A dog burial in Greene County, Ill. This fossil dates back to about 8,500 years ago. Courtesy of Del Baston, Center for American Archaeology hide caption 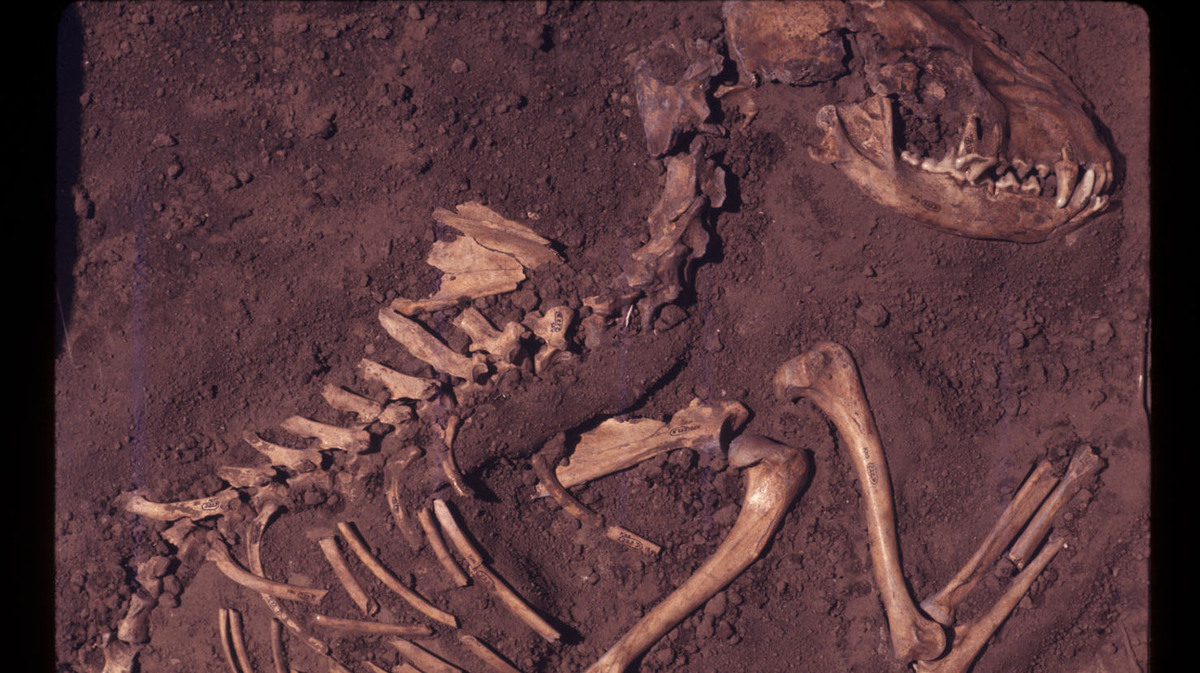 A dog burial in Greene County, Ill. This fossil dates back to about 8,500 years ago.

Scientists have used some new tricks and old dogs to show that thousands of years ago, wolves may have first become man's best friend in Europe.

Researchers extracted DNA from ancient wolf or dog fossils and compared it with DNA from modern dog breeds and wolves. Until recently, labs didn't have the kind of genetic tools they'd need to work with such old dog DNA and do this kind of detailed comparison.

One surprise is that most domestic dogs are more closely related to ancient wolves than modern wolves. "It's these ancient wolf populations, now extinct, probably residing in Europe, that are the direct ancestors of domestic dogs," says Robert Wayne, a biologist at the University of California, Los Angeles. 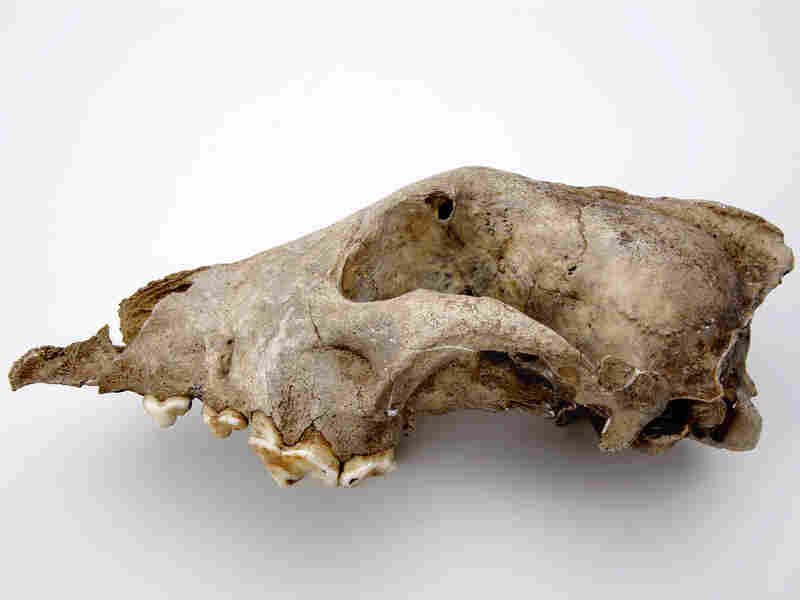 This part of a dog skull found in a cave in Belgium dates back to about 36,000 years ago. Scientists think this species was an ancient sister-group to all modern dogs and wolves, rather than a direct ancestor. Courtesy of Royal Belgian Institute of Natural Sciences hide caption 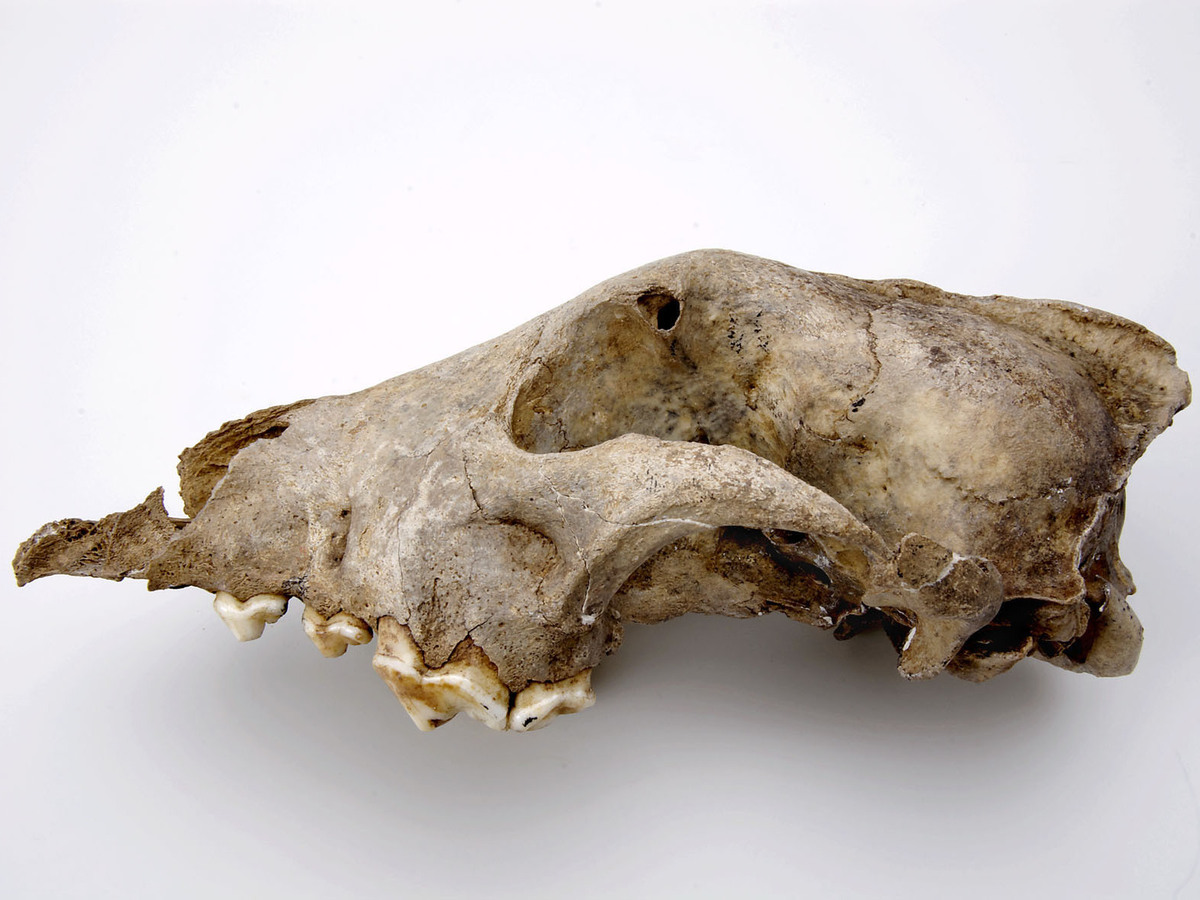 This part of a dog skull found in a cave in Belgium dates back to about 36,000 years ago. Scientists think this species was an ancient sister-group to all modern dogs and wolves, rather than a direct ancestor.

His team's new analysis, in the journal Science, suggests that European wolves became dogs somewhere around 18,800 to 32,100 years ago, before the start of agriculture.

Wayne says that wolves probably started growing closer and closer to the hunter-gatherers who roamed Europe back then. Perhaps the wolves fed on leftover carcasses, and the hunters found them useful in some way — maybe the wolves were good at finding prey, or could alert hunters to danger.

This vision of hunters who gradually recognized shared interests seems plausible to Wayne, who notes that dogs are the only large carnivore that humans ever domesticated.

"They're very special, I think. They're clearly the oldest domesticated species," says Wayne. "How could we actually take something that could kill us and it becomes our best friend and lives close with us, sleeping on our beds, but in the wild these are aggressive animals that routinely take down prey larger than themselves. So that, I think it is a wonderful puzzle."

It's a puzzle that scientists have been trying to solve for years. And although this new study adds to the debate, it's unlikely to settle the question once and for all.

Previous genetic studies of modern dogs and wolves suggested that domestication might have happened in the Middle East or East Asia. But the oldest known fossils that are thought to be ancient dogs come from Western Europe and Siberia, and date from 15,000 to 36,000 years ago.

For this latest study, Olaf Thalmann from Finland's University of Turku and his colleagues extracted mitochondrial DNA from bits of bone and teeth from 18 ancient remains. Some looked more wolf-like, and some looked more dog-like. "Some of these ancient dogs have very short faces, for instance, and are large, almost Great Dane size, but they clearly are not like modern wolves," says Wayne.

This ancient DNA was compared with DNA from a wide range of modern animals, including 77 dogs from different breeds, 49 wolves, and four coyotes.

Wayne says the dogs can be put into four different groups. "Three of them group with our ancient dog or wolf sequences from Europe. One of them groups with modern wolf sequences but still from Europe," says Wayne. "We really didn't have any other conclusion that we could make except that dogs seemed to be domesticated in Europe."

Elaine Ostrander, a genetic researcher who has studied dog evolution at the National Human Genome Research Institute, says this study is "really the first one to include ancient canines. And it doesn't just have one or two — they managed to have 18. So they are able to build a pretty good statistical argument."

But she thinks the debate will continue, because the researchers only looked at mitochondrial DNA, a small portion of the animals' DNA. What's more, the scientists mostly looked at fossils from Europe and didn't have any from places like China.

"And so I think there probably remain to be found various fossils and ancient DNA sequences to sequence that will certainly fill in pieces that we're missing," says Ostrander. "It's clear that some things were going on in the Middle East and China, but we haven't been able to sort of fit that whole story together yet."

So she sees this study as not an end, but a beginning. "I think we're going to learn a lot more about dogs," she says, "and in doing so, as always when we study dogs, we'll learn more about ourselves."