Accessibility links
End Of An Era: India's Greatest Cricketer Begins Final Match Combine the records of baseball legends Babe Ruth, Hank Aaron and Pete Rose, and that approximates what India's most revered sportsman, Sachin Tendulkar, achieved on the cricket field during his fabled 24-year career. The ascent of the sport's superstar coincided with the rise of the new India. 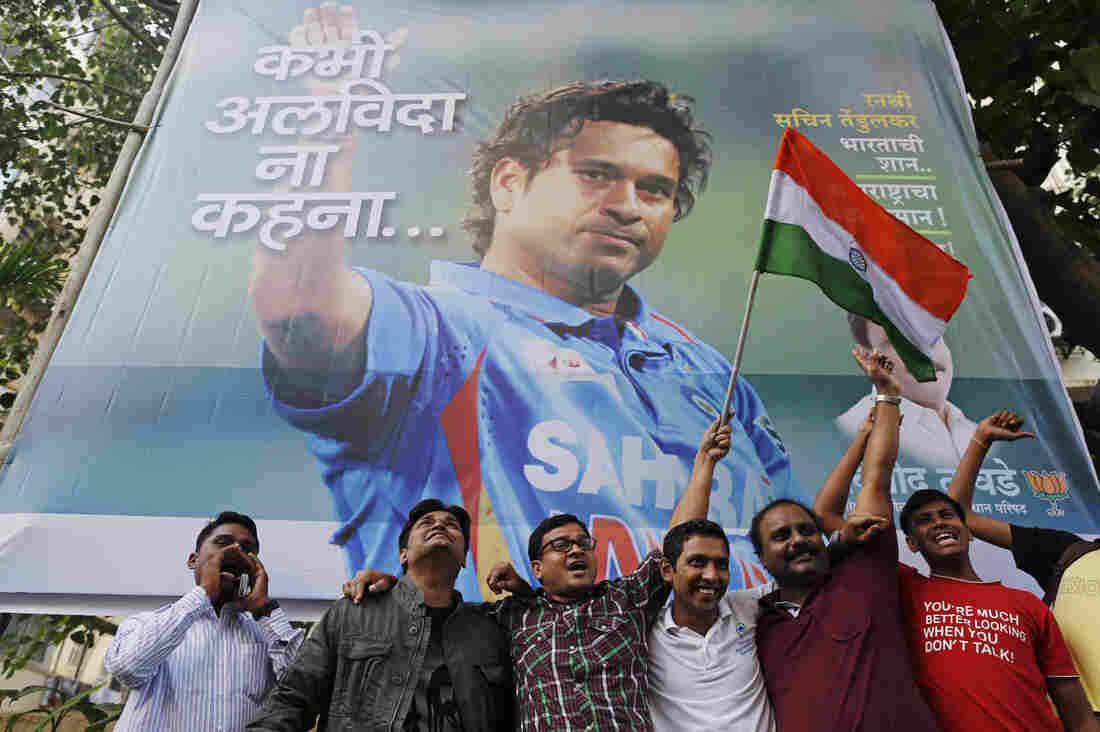 Cricket fans holding an Indian national flag cheer in front of a billboard of superstar cricketer Sachin Tendulkar outside a stadium in Mumbai on Thursday. India's favorite son dominated the sport for nearly a quarter of a century. Now, that fabled career is coming to a close. Danish Siddiqui/Reuters /Landov hide caption 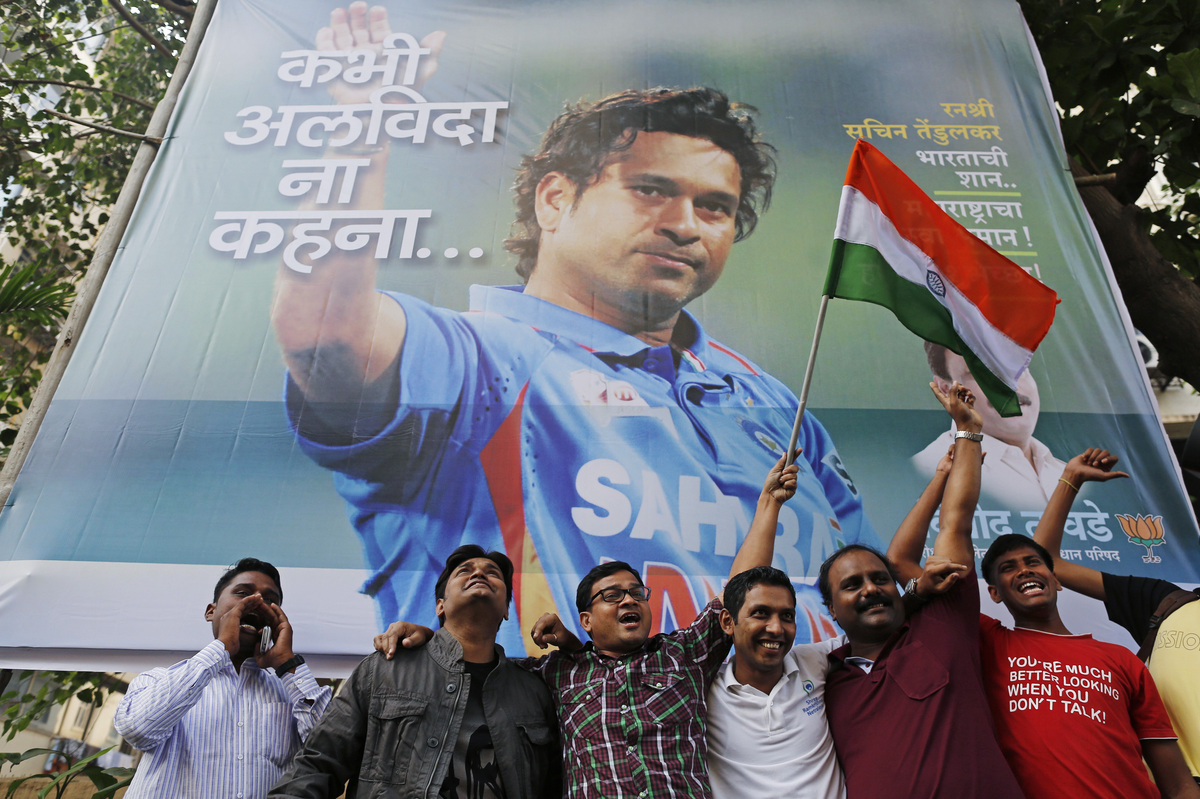 Cricket fans holding an Indian national flag cheer in front of a billboard of superstar cricketer Sachin Tendulkar outside a stadium in Mumbai on Thursday. India's favorite son dominated the sport for nearly a quarter of a century. Now, that fabled career is coming to a close.

Sachin Tendulkar: The very name evokes Indian national pride, and it resounded through Wankhede Stadium Thursday in the cricket superstar's hometown of Mumbai.

That's when Tendulkar took the field for the final test match of his fabled 24-year long career. There are fevered celebrations for the 40-year-old batsman who has dominated the Indian imagination on and off the field, and whose self-effacing demeanor masked a steely determination to win.

The atmosphere was electric as India's favorite son stepped onto the field. 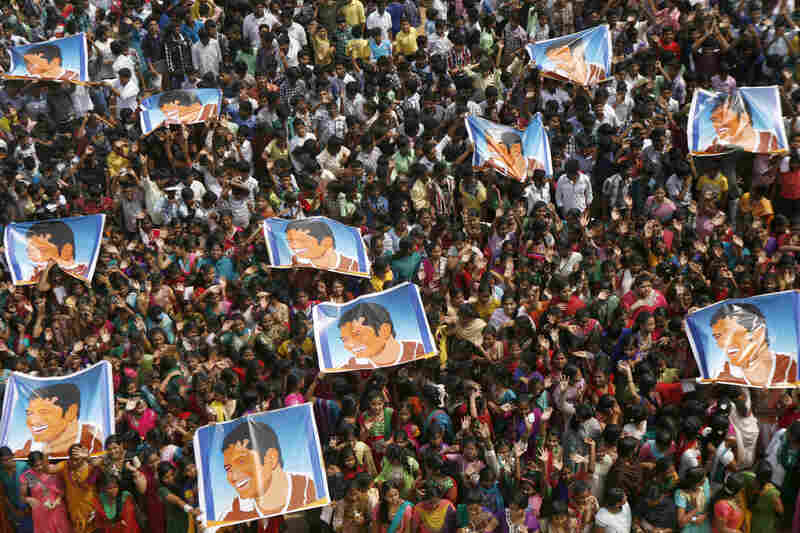 Indian schoolchildren display posters of Tendulkar as they gather to honor him in Chennai, India, on Nov. 14. Arun Sankar K/AP hide caption 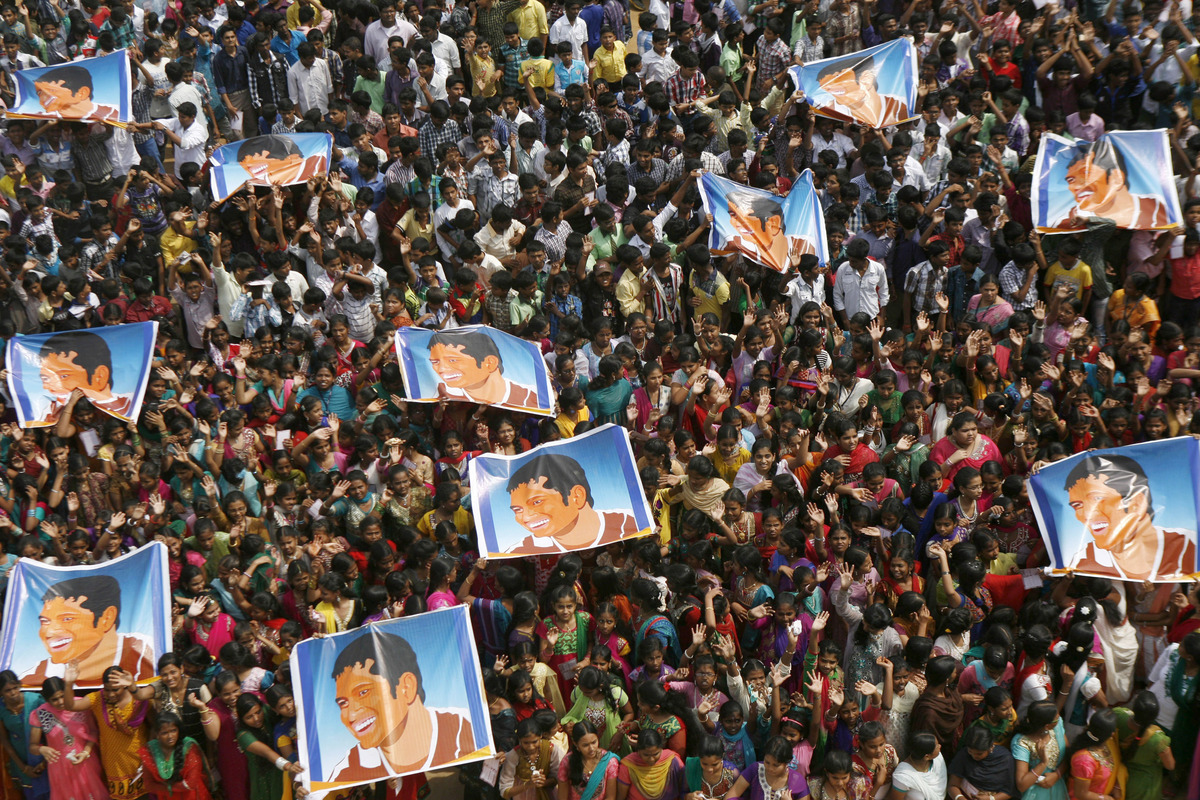 Indian schoolchildren display posters of Tendulkar as they gather to honor him in Chennai, India, on Nov. 14.

Filled to capacity, Wankhede Stadium was awash in banners that read simply: "Believe!" As Americans believed in Babe Ruth to swat a home run and in Michael Jordan to fly, India's cricket-obsessed citizens, sports fans and schoolchildren believe in batsman Sachin Tendulkar. Not just in his power to score — but in his power to make anything seem possible.

Tendulkar's own ascent — he's one of cricket's first millionaires — coincided with the rise of the new India.

A pro since age 16, Tendulkar holds the record for runs and "centuries" — cricket terminology for 100 runs — scored in both one-day and five-day matches. It's as if you took the records of Babe Ruth, Hank Aaron and Pete Rose and wrapped them all together. The five-day competition against the West Indies that began Thursday marks Tendulkar's 200th test match — another record for cricket history.

But the ubiquitous celebrations for the living legend, arguably the most revered man in contemporary India, are not without controversy.

Nitin Dalal of the Mumbai Cricket Association acknowledged that at least 12,000 of the 33,000 tickets to Wankhede Stadium were promised to corporate sponsors, government officials, and well-heeled social clubs, or gymkhanas. Membership in a gymkhana can run upwards of a million rupees, approximately $15,000. 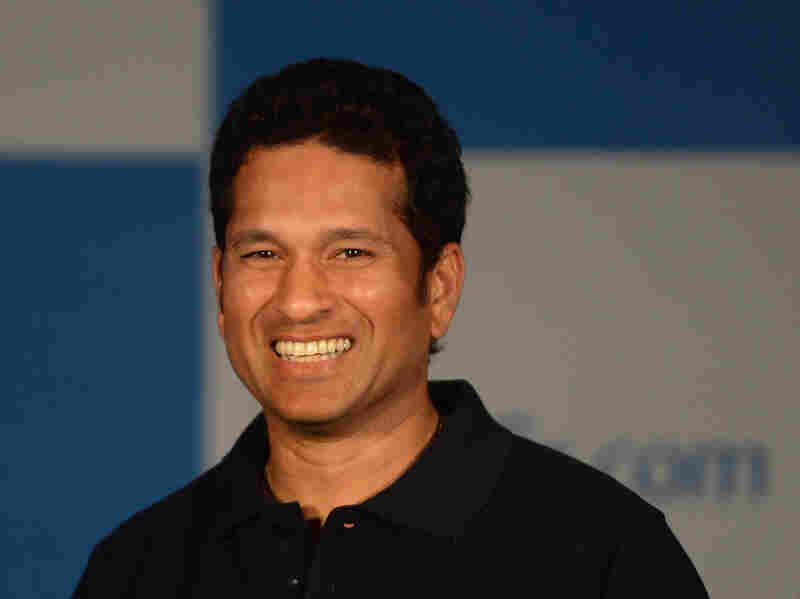 Sachin Tendulkar smiles during a news conference in Mumbai on Oct. 23. The beloved batsman was one of cricket's first millionaires. Punit Paranjpe/AFP/Getty Images hide caption 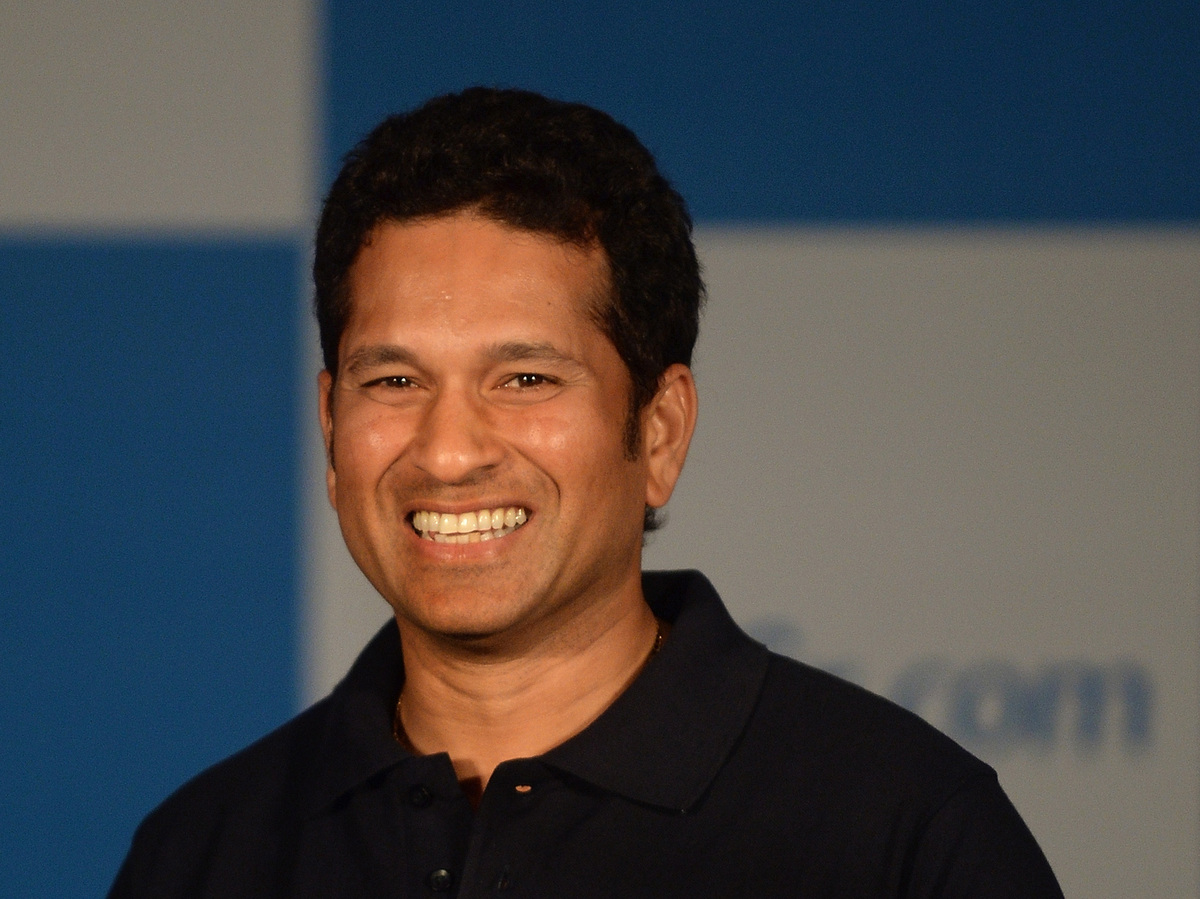 Sachin Tendulkar smiles during a news conference in Mumbai on Oct. 23. The beloved batsman was one of cricket's first millionaires.

A paltry 3,000 tickets were left for the general public. I asked Dalal how that honored Tendulkar, whom many consider to be a man of the people.

He laughed nervously. "That's a big question," he responded." I can't comment on that."

There was no mistaking public interest in the final match: The website that sold the public tickets received 19 million hits. Social media showered abuse on the website, which couldn't take the load.

Two young doctors told me they were online nonstop from 11 a.m. to 11 p.m. on Monday, only to reach the payment page before they were knocked off — again.

"We were tired, our eyes were so heavy, sitting on the computer for 12 hours in a row," says one of the pair, Maulik Modi. "So we lost our hopes and we went to sleep."

But fortune ultimately smiled on Modi and his colleague, Mehta Dhruv. The site sent them a message the next morning — confirming their tickets — and they jumped on a train to Mumbai. 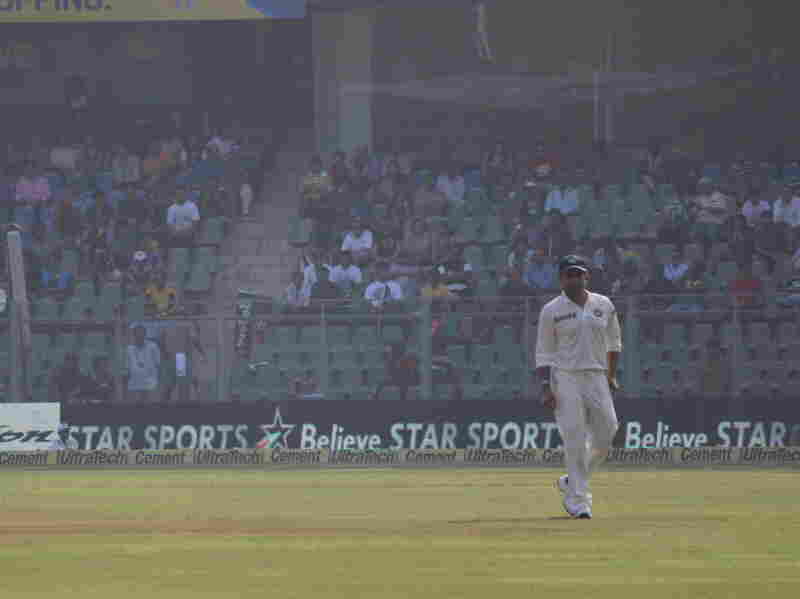 Sachin Tendulkar takes the field in his hometown of Mumbai on Thursday during his final cricket match playing for India. Anoo Bhuyan hide caption

The ticket allocation that favored the privileged left Mumbai businessman Mehul disheartened. He asked to be identified by first name only.

"It's like the Wild, Wild East," Mehul says. "If you have a big wallet or a big guns you're in; if not, you're not. It's sort of a shameful state of affairs. And we would love to go see Sachin, and God bless him for being there for us, but we can't, so we're not very excited."

Dileep Premachandran, the editor-in-chief of Wisden India, an authoritative voice on cricket, says the handling of the Tendulkar match turns the meritocracy of the new India on its head.

"There is a lot of talk about merit and getting ahead on your own steam, but at the end of the day, so much of what happens is based on who you know," Premachandran says. "And that's true everywhere, whether that is journalism or business or acting or music — you are who you know to a large extent. And that really limits opportunities for people who are not connected."

Across the country in home and offices, hundreds of millions of people stopped what they were doing to take in Tendulkar's finale on television. But for 15-year-old Ashutosh Karpe, one of the lucky ones to have a ticket to the match, there was no substitute for being inside the stadium to see the man he calls "a god."

Sachin Tendulkar will be back to entertain, inspire and excite Friday as the Indian team resumes play against the West Indies.