Accessibility links
Movie Review - 'Dear Mr. Watterson' - From A Superfan, A Love Letter To 'Calvin & Hobbes' Joel Allen Schroeder's documentary, Dear Mr. Watterson, digs deep into what makes the comic so beloved, seeking out experts and fans — but not its very private creator — to celebrate the strip's legacy. 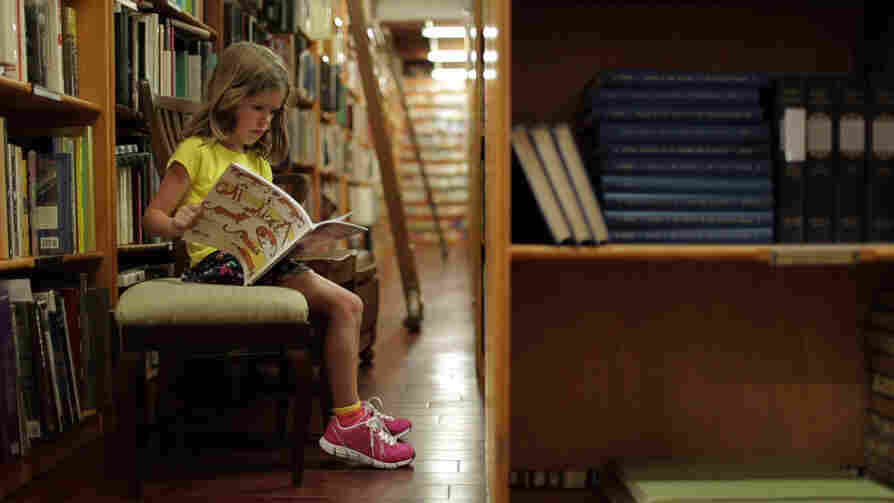 Dear Mr. Watterson explores the lasting appeal of the Calvin & Hobbes comic strip — even among readers, like this one, born after it concluded. Gravitas Ventures/Submarine Deluxe hide caption

New Year's Eve 1995 fell on a Sunday, and given that it was before we all started reading our news on LCD screens, chances are pretty good you had a Sunday paper delivered. And that day's paper had something special wrapped up inside.

If you're the sort who wistfully remembers exactly where you were when you opened up the Sunday funnies that day — if you're the type, maybe, who skipped the rest of the paper to get there — then the documentary Dear Mr. Watterson is an artifact aimed squarely at the tear-stained nostalgia receptors of your brain. You know, where you keep that sniffly sense-memory of watching a little boy and his tiger pal go tobogganing off into a field of blank white possibility.

Director Joel Allen Schroeder is just that sort of devotee to Bill Watterson's Calvin & Hobbes comic, which memorably ended that day, and his documentary is essentially the thank-you letter that follows naturally from the salutation of the title. For those who share Schroeder's love for the strip, the film becomes a chance to co-sign that letter, to spend time with a bunch of other superfans expressing shared love. 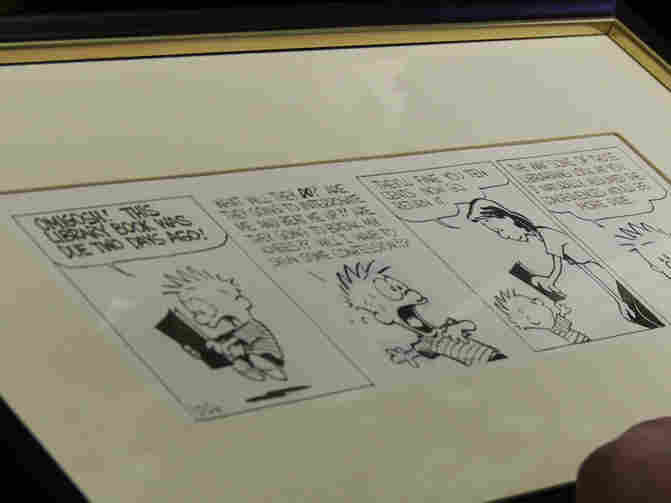 The film respects Watterson's famous desire for privacy — he's not interviewed — but it does take viewers to the library where the original Calvin artwork is housed. Gravitas Ventures/Submarine Deluxe hide caption 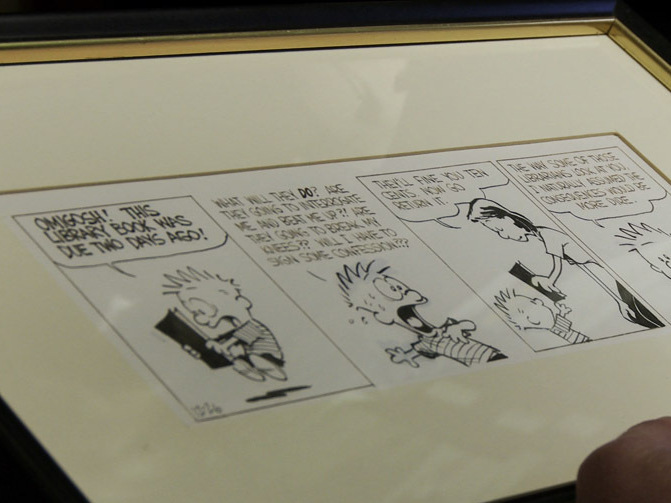 The film respects Watterson's famous desire for privacy — he's not interviewed — but it does take viewers to the library where the original Calvin artwork is housed.

Which is great if you're a member of that club. For the uninitiated, it may feel a little like looking up at Calvin's tree-fort clubhouse without an invitation.

But then again, who isn't a fan of Calvin & Hobbes, right? That's the perspective taken by the doc, which deploys comics-museum curators and archivists to argue that the strip is both universally loved and remarkably still popular in the hearts and minds of kids who weren't even born when the strip started. This, despite the lack of any merchandising — due to Watterson's famous resistance to his work's existing in any form that he couldn't have complete control over.

Watterson's other famous quality is his reclusiveness, which puts Schroeder in an awkward position as both fan and filmmaker. A documentarian taking a complete approach to Calvin & Hobbes would usually attempt, at least, to get some input from the mind behind the marvel. But true fans of the comic tend to be respectful and understanding of Watterson's desire to remain relatively anonymous in his post-Calvin life, and would feel intrusive even requesting an interview.

The result is that Dear Mr. Watterson is notably missing its title character. In his place, Schroeder assembles as many people as he can who knew him during his working years to talk about their personal interactions with him. That list is fairly short, however, and the majority of the personal recollections come from Lee Salem, whose company syndicated the strip, and from Bloom County cartoonist Berkeley Breathed.

Their recollections are some of the most fascinating in the movie, since both obviously have a huge amount of respect and admiration for the man. But both had a sometimes combative relationship with him: Salem, because of his role in always trying to get the reluctant Watterson to agree to licensing deals, and Breathed, who wasn't shy about selling his creations and who took frequent needling from Watterson for all the Bloom County merchandise.

The documentary is at its best when it eases up on the adoration a little and turns to a serious discussion of the state of comics these days, what with newspapers on the decline and digital media scattering an art form that was once centralized on pages delivered to everyone's door. As Breathed points out, there's been no strip that's even come close to having Calvin & Hobbes household-name appeal since Watterson signed off — and it's unlikely there ever will be again.

Dear Mr. Watterson can be workmanlike in its presentation: talking head after talking head, broken up by heartfelt personal recollections from its director, and trips to Watterson's hometown of Chagrin Falls, Ohio, and the Billy Ireland Cartoon Library, where Watterson's original artwork is housed. If it won't last long in the memory of the viewer, it does accomplish what it sets out to do, offering up an earnest paean to a sorely missed artist. If nothing else, it's a pleasant reminder that if you haven't taken those Calvin & Hobbes anthologies off the shelf in a while, maybe it's time to go exploring again.