Accessibility links
With Robberies Up, Oakland Residents Turn To Private Cops Nervous over a steep spike in armed robberies, several Oakland, Calif., neighborhoods have pooled funds to hire private security patrols. And while some residents feel safer, others worry that there is no one policing the private police force. 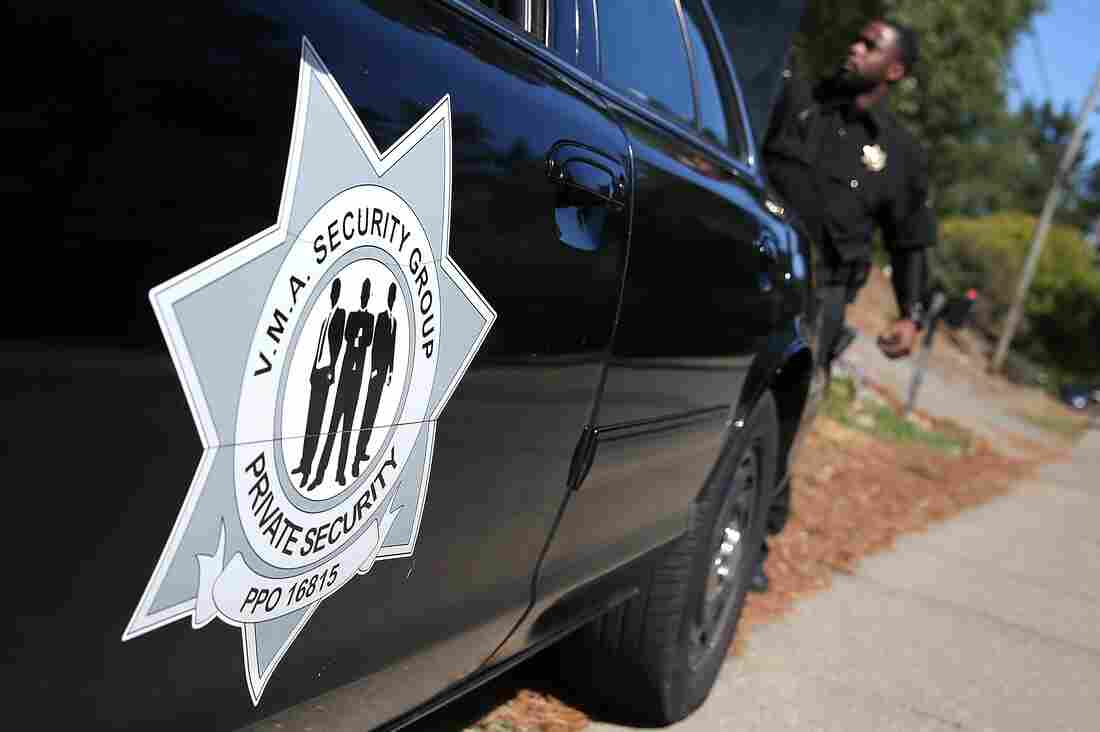 The city of Oakland, Calif., is in the middle of a robbery epidemic. In response, some residents in several Oakland neighborhoods are taking matters into their own hands, hiring private security companies to patrol their neighborhoods.

Overall, robberies in Oakland are up 24 percent over the past year, with armed robberies up 45 percent. Since the recession dried up local tax revenues, the Oakland Police Department has been hamstrung by the loss of more than 200 officers and can't respond to all the calls it receives for help.

Lower Rockridge, a leafy, upscale community in North Oakland, is one neighborhood that has brought in private security. The streets are lined with small, Craftsman-style bungalows suitable for young families — like that of attorney Dakin Ferris.

Ferris, a former Marine, says he has the martial arts skills to protect himself. But a recent robbery on his block left him and his family feeling vulnerable.

"Three doors down across the street, my neighbor was putting his key in the door at 7 o'clock after coming home from work," Ferris says. "[He] was rushed from the street — didn't see, apparently, the people coming. But he ended up being beaten, hospitalized and, obviously, robbed."

We need to take care of our personal security. The city of Oakland is not going to do it.

Ferris says he wanted action, but wasn't sure how many of his neighbors felt the same way. Then one morning in September, two armed men robbed a group of carpooling commuters, relieving everyone of their money, smartphones and laptops.

Ferris says such a brazen crime was a game changer.

"To finally have that catalyzing event, where people said, 'I am ready to take action,' for me that was awesome," he says. "I'm sorry that this happened. This finally gets people the motivation to say, 'Hey, we need to take care of our personal security. The city of Oakland is not going to do it.' "

So after the carpool robbery, residents in two different sections of the neighborhood used a crowdfunding website to raise tens of thousands of dollars. They're using the funds to hire private security patrols on a four-month trial period.

More than 600 households pay $20 a month for unarmed patrols in clearly marked cars to run 12 hours a day, Monday through Saturday.

Lower Rockridge is just one of several Oakland neighborhoods where residents have either hired private security patrols or are actively debating taking that step. In some neighborhoods, the patrols are armed.

But the private patrols are not universally popular. And in a less upscale area of Lower Rockridge, not everyone is on board, says resident Nicole Aruda.

"A lot has been made that this crowdfunding campaign was democracy in action. I don't believe it," Aruda says.

Aruda, like Ferris, is an attorney, a parent of two and a neighborhood activist. She says the organizers of the crowdfunding efforts bypassed the objections of their neighbors.

"And the rest of us, who have not signed up with this company, there's no accountability for us," she says. "If there are problems with patrols in the neighborhood, we have no one to go to because we're not contractees. The security company has no responsibility to us. There's no transparency."

Aruda says the online debate left out hundreds, if not thousands, of neighbors who were not part of the discussion.

"It's important to get outside your own echo chamber and really listen to people of differing opinions," she says. "That hasn't happened here."

One of Aruda's concerns is the potential for racial profiling. Aruda says she has a teenage son whose friends might be targeted as "suspicious" in their own neighborhood.

'Not A Substitute For Police'

Despite the controversy, the patrols in Lower Rockridge began early this month. Since then, neither the organizers of the crowdfunding effort nor the private security company has spoken publicly. They also declined to be interviewed for this story.

As for the police, Oakland Police Department spokeswoman Johnna Watson says they appreciate the help.

"We welcome the extra set of eyes and ears," she says. "Any help that we can receive to reduce crime in our city is good for all of us."

Local politicians are supportive too. But Dan Kalb, the Oakland city councilman who represents the Lower Rockridge neighborhood, says he doesn't want anyone to lose faith in the Oakland Police Department.

"I hope [the patrols are] successful, but they're certainly not a substitute for police," he says. "As long as we understand that — that it's a supplement for the time being — then let's all hope it works."

But it's not yet clear how the success of this experiment will be measured, or whether success will be defined simply by residents feeling safer.