Accessibility links
Slowly, Priest Realized Celibacy Was A 'Destructive' Force After 17 years as a priest, Thomas Groome decided that celibacy was "not life-giving" and left the priesthood to get married. He remains a devout Catholic and professor of theology and talks with host Rachel Martin about how having a family has enriched his faith. 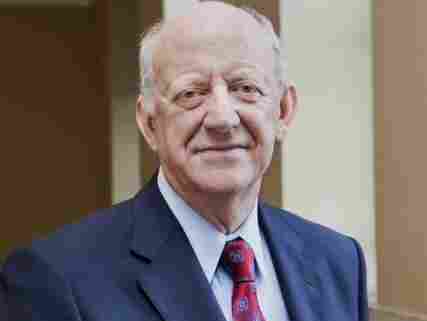 Thomas Groome is the author of "What Makes Us Catholic." Caitlin Cunningham/Boston College hide caption

I said, 'Father if I put as much effort into charity as I have to put into celibacy, I would be a saint.' And he said, 'Well, maybe it's taking too much effort to remain celibate.' And I tried and did, but meanwhile, it was a huge struggle. I found it a tremendously lonely life.

In 1968, Thomas Groome was ordained as a priest. Even then, he wondered about the requirement that priests remain celibate.

"I was in an old Irish seminary back in the late '60s, early '70s," he tells NPR's Rachel Martin. "At that time, we thought everything was going to change," because the church had recently made changes to the mass.

But in the years following, the rule didn't change, and Groome became more and more conflicted about his own celibacy. He slowly started to realize it wasn't nurturing him and giving him life.

"In fact, it probably was becoming destructive of me," he says. "And I think that's one of the dangers of obligatory celibacy, that it can lead to self-destructive and outer-destructive behavior. It's a hazardous lifestyle."

Groome had a moment of clarity during a 30-day retreat. "By the 18th day I began to realize that I was fooling myself," he says. He'd been a priest for 17 years. He decided to take a year's leave of absence.

During that time he spent time in a Trappist monastery and considered becoming a Jesuit priest. "My attitude was, if I'm going to live this celibacy, then let me live it in community, because part of my difficulty was the loneliness of it."

But in the midst of his time away, he met a woman and fell in love. He applied for dispensation from Rome and eventually married her. Groome says marriage has enriched his faith enormously.

"I've often said I'd love to go back and re-preach some of the sermons I gave on marriage," he says. "Now that I know a little bit more about it, I wouldn't be nearly as self-righteous and as advising, either, because I know the challenges of it." He thinks marriage could be a positive force in the lives of other priests, too.

"In many ways," Groome says, "my marriage has become a tremendous call to holiness for me." But if the rules ever change, he'd seriously consider returning to the priesthood. "Certainly. I'd be very excited about the possibilities."

Should Catholic priests be allowed to marry? Tell us on Weekend Edition's Facebook page, or in the comments section below.