Accessibility links
Bike Evangelist Wants To Put More Riders In The Low Seat Recumbent bikes are said to be much more comfortable to ride than traditional bikes, but they're also more expensive. One Wisconsin man hopes to make the low-riding bikes more affordable by building them out of conventional bike parts. 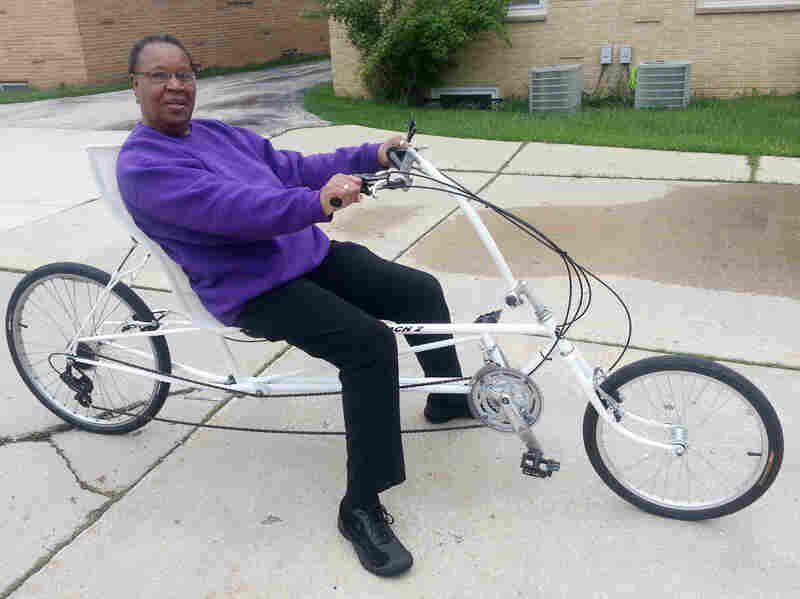 After several knee operations, 66-year-old Marilyn Cowser of Greenfield, Wis., found herself no longer able to Rollerblade or ride her bike.

She was advised to try a recumbent bike, but when Cowser went to her local bike shop, she found they were selling for upwards of $1,500. Cowser wasn't willing to spend that kind of money, so she went to see a guy about a half-hour away who builds recumbents in his garage.

Cowser bought a white, refurbished 10-speed recumbent for just $400 from Recycled Recumbents in Glendale, Wis. Cowser says she's been converted to the recumbent way of cycling.

"I just love it," she says. "That's all I can say. It was one of the best purchases. I see myself riding this bike well into my 70s."

Because Biking Shouldn't Be Painful

Andrew Duncan Carson runs Recycled Recumbents entirely from his home garage. Cut-up sections of bicycle frames hang from the rafters, a plastic 5-gallon bucket filled with bike forks sits near a messy workbench and visitors will notice a 500-foot roll of bicycle chain. 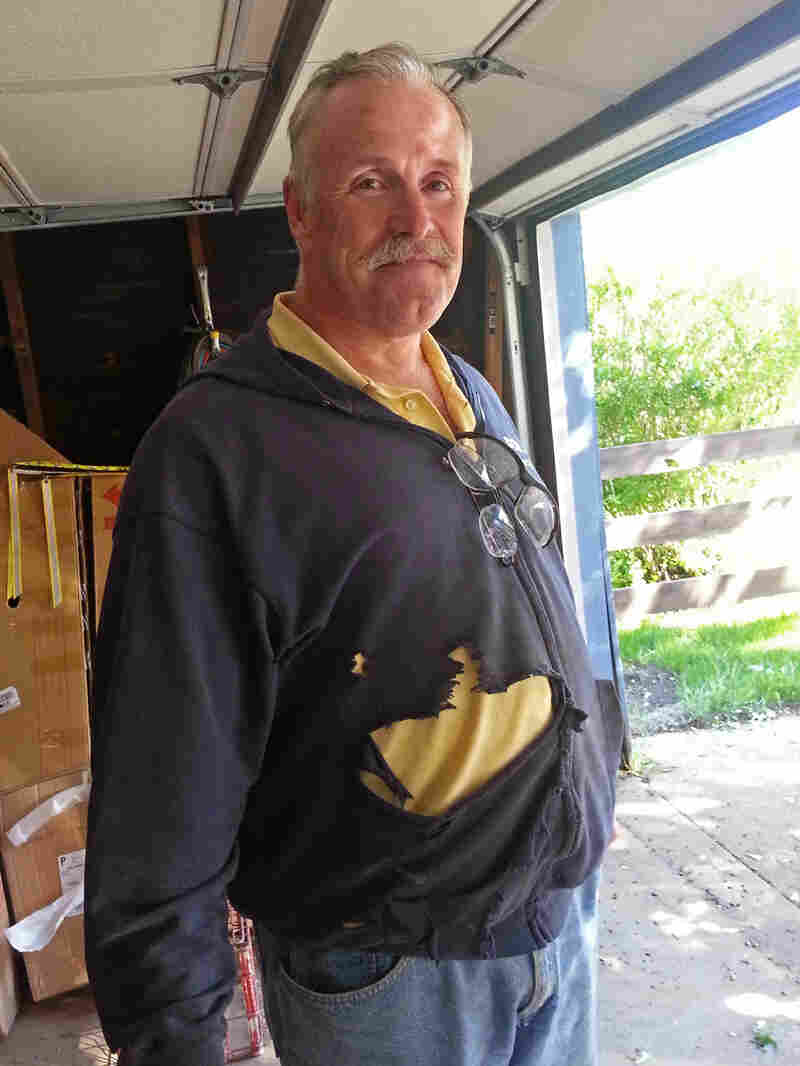 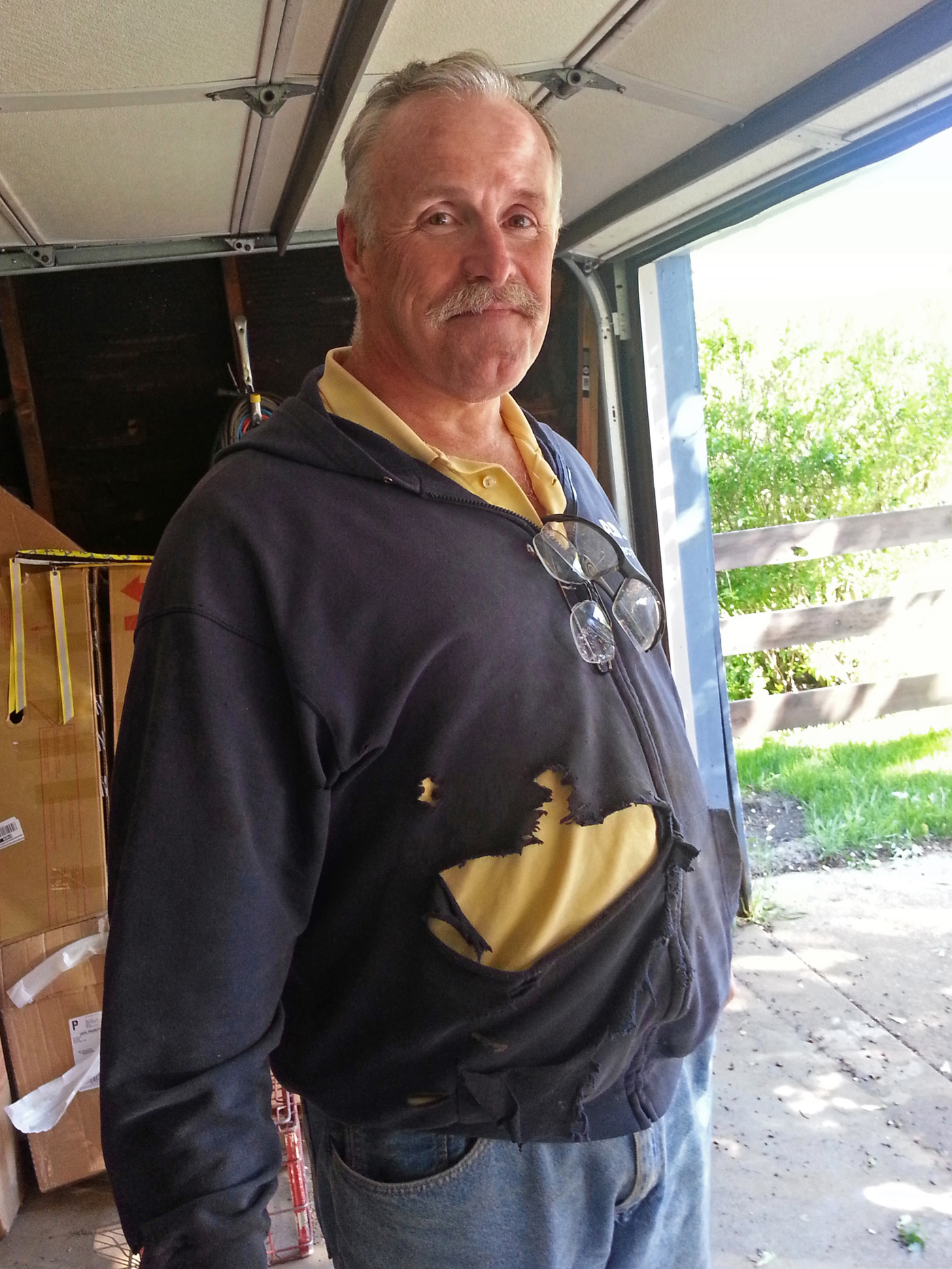 A shower of sparks spills onto the garage floor as Carson cuts the rear triangle of an upright bike frame with an angle grinder. Carson is more than just a maker of recumbents; he's an evangelist for them.

"The truth of riding an upright bicycle for most of us is that it hurts," Carson says. "It hurts where the sun don't shine. I never got completely happy on my upright bike. It always hurt. And I thought that part of bicycling was dealing with the pain and in fact it was [because I was] on an upright bike."

Carson noticed a fair number of cyclists pedaling recumbents around Wisconsin. It got him thinking about riding his upright bike.

Carson decided to build his own recumbent bike and found instructions online. Those instructions required some welding, but that was something that Carson, a jack of all trades, already knew how to do.

He rode his homemade recumbent on a two-day charity ride up the West Coast of Lake Michigan, and at the end of the first day he had a real aha moment.

"I got up there, and I said, 'You know, I'm tired. I've been 75 miles today but nothing hurts. I'm sweaty, but I could do another 50 miles today,' " Carson says. "It was that significant a difference that told me I would never ride an upright bike again."

Carson wanted to share that experience with others. He's built close to 500 recycled recumbents in the last 10 years. Most of them sell for sell for $700 or $800 — half of what they cost in stores.

Falling In Love, With A Bike

It's unclear whether this is a profit-making enterprise or simply a labor of love. It takes him about a week to make each bicycle, and there's also the cost of acquiring the used bikes he cannibalizes and paying a painter to powder coat the newly created frames.

"For me, it's always been about access," he says. "First my own access. How do I get there without spending four figures? And then, how do I help other people get there?"

First-time riders tend to be overwhelmed by how natural it feels to sit back in a recumbent. But riders also feel vulnerable until they adapt to a whole new way of balancing.

"On a bike, you are using that saddle between your legs to control the bike," Carson says. "You're pivoting your hips. You don't use your hips on a recumbent; you're trapped in that seat. Comfortably trapped, mind you, but you are trapped. So you are using your shoulders a bit more, your arms, and of course, profoundly different from the upright bike is the fact that you can't stand up."

Mike McKeough of Grafton, Wis., bought a recycled recumbent. The 58-year-old says that initially he fell down a lot, but after he got the hang of it, he says he fell in love with recumbent cycling.

"People look at you," he says. "Little kids point at you, you know. You feel a little special when you're riding one. It's neat."