Accessibility links
Interview: Dave Eggers And Nyuol Tong, Editor And Contributor, 'The Best Of McSweeney's' Timothy McSweeney's Quarterly Concern, a literary journal known for publishing experimental fiction and emerging writers alongside household names, celebrates its 15th birthday with an anthology of selected works. Editor Dave Eggers remembers the magazine's early days, when it was a "land of misfit writings" that had been rejected from more mainstream publications. 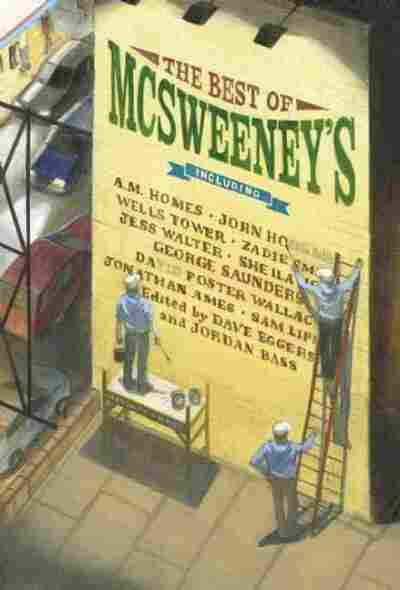 The Best of McSweeney's

In the late 90s, before Dave Eggers wrote a bestselling memoir (A Heartbreaking Work of Staggering Genius), before he penned the screenplay for Where the Wild Things Are, before any of his novels, he was a young guy sitting in his kitchen tearing open envelopes filled with literary submissions.

They were "mostly articles that had been killed from larger, more reputable magazines and journals," Eggers tells Morning Edition's Renee Montagne. "So it was sort of a land of misfit writings, I guess. Pieces that were too strange, too untimely, too short, too long, too experimental."

But they were perfect for a quirky new literary magazine he was putting together: Timothy McSweeney's Quarterly Concern, which celebrates its 15th anniversary this year. To mark that milestone, Eggers has published a hefty Best of McSweeney's anthology — several hundred pages thicker than the first issue of McSweeney's, which bid the reader, in old-fashioned print, "Welcome to our bunker!"

"I was working at some bigger magazines at the time, and this was sort of a reaction to sort of bring it back to the text only, and make a very uncomplicated journal that was a little bit of a throwback," Eggers says. "I collected a lot of pamphlets and Bibles and medical reference books from the 17th, 18th, 19th century and there was that kind of intimacy in a lot of these books that would speak directly to the reader, like, "This is the greatest book that you have ever owned! It replaces all other texts!" You know, "Read nothing else!" I mean, there was a real kind of intimacy and, at the same time, kind of a blustery salesmanship to those journals, and so I was kind of playing on that for a while."

Over the last 15 years, McSweeney's has grown into something of a literary empire based in San Francisco, and that flagship literary quarterly has evolved from a plain-looking throwback to the 19th century, to an intriguing array of eye-popping designs and visual puns. One issue came out in the form of a pile of junk mail. Another contained a short story printed on giant playing cards — readable any way the cards were dealt.

Dave Eggers is the author of What is the What, Zeitoun and, most recently, The Circle. Tina Fineberg/AP hide caption

Dave Eggers is the author of What is the What, Zeitoun and, most recently, The Circle.

"There was one issue that was a giant box with a head painted on it, so when you put it on your shelf, it looks like you have a disembodied head on your shelf," says Eggers. "I think we wanted the journal to work on all those different levels — to surprise and delight on an object level and a design level, but also when you get into the stories, you get phenomenal new writing."

Big names like David Foster Wallace, Zadie Smith and Michael Chabon have filled the pages alongside all manner of emerging voices, and the new anthology reflects that history. It begins with McSweeney's' mock letters section, easily its goofiest offering. Typical to the section is a letter from one Tom O'Donnell:

I have a common name. According to some estimates, nearly 40 percent of men are named "Tom O'Donnell." ... In the time it took me to write this sentence, chances are you named at least one of your children "Tom O'Donnell."

This would all be fine if it were still Bible times, but today it's a problem. Why? Because it's basically impossible to Google myself.

Tom O'Donnell hopes, in his increasingly demented letter, that McSweeney's will hold a contest, or a poll, or perhaps a tournament to find him a new name.

I've narrowed down my list of potential replacements to the following ... :

Vladislav Fukuyama-Gomez: I love names that combine several different ethnicities, because they're used in movies to tell you it's the future.

Dennis Pulley: I can think of no better way to honor my great-grandfather's memory than by taking the name of the man he killed.

QUIZNOS Presents Todd DeMoss: Sure, it's a mouthful — but so is the delicious Chipotle Prime Rib sandwich, only available at QUIZNOS.

Eggers is particularly fond of this segment of the journal. "The first bunch of issues had literary humor in it, which is a form that was kind of neglected at the time. So we wanted to be a home for that, and that became the letters section."

The journal also takes on the intimate, the real, the tragic. Among the short story writers found in McSweeney's who come from places you hear about on the news is Nyuol Tong, 22, a senior at Duke University. As a child, he fled the war in southern Sudan with his family. His contribution to The Best of McSweeney's, "The Bastard," tells the story of a mother and son traveling to the capital of South Sudan to find the son's father.

After exchanging pleasantries, he adjusted himself in his chair, faced us directly, and confirmed the rumor, spread by various relatives, that what he and Mama had done on the grass-covered shores of the Loll River fifteen years ago — never mind that it begot me — was awoc, a mistake. He wanted nothing to do with us, he said, and would be grateful if we never contacted him again. Then he rose up, fixed his blue tie, buttoned his black suit, and disappeared ...

In a sense, it's a story about the impact of a war, but it's also about a mother and a son — a part of life that, a lot of times, journalism doesn't cover.

"I think the war, however large, is really made up of small wars — struggles that are almost universal. In fact, these are the only struggles that we can relate to, regardless of where we live," Tong says.

Works from Tong and other international writers are part of what has earned McSweeney's a reputation for publishing quality material that speaks to diverse range of perspectives.

"I think our scope has become more and more expansive every year, from being a more experimental journal to one that embraces any great writing," Eggers says. "It is kind of like public radio, you know? We have to put out the same kind of pledge calls to support what should be a really unprofitable endeavor. We're an operation that has never made a profit, but at least we exist, and to exist as a literary journal for 15 years, we feel incredibly lucky."