Accessibility links
Little-Known Immigration Mandate Keeps Detention Beds Full A congressional directive requires U.S. detention centers to fill 34,000 beds per night. Supporters say it ensures that the nation's immigration laws are being enforced. But critics say housing a fixed number of immigrants at any given time is inhumane, inefficient and too expensive. 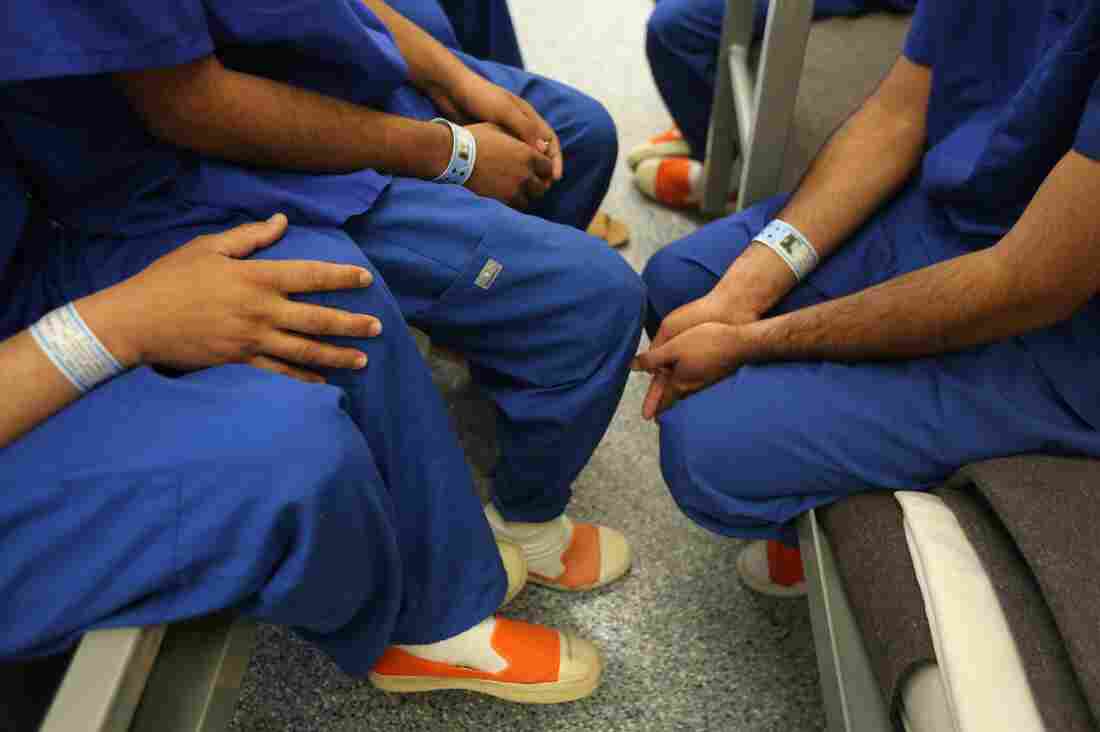 The federal immigration detention center in Florence, Ariz., is one of about 250 such facilities around the country. Immigration and Customs Enforcement (ICE) is required to house 34,000 immigration detainees per day, nationwide. John Moore/Getty Images hide caption 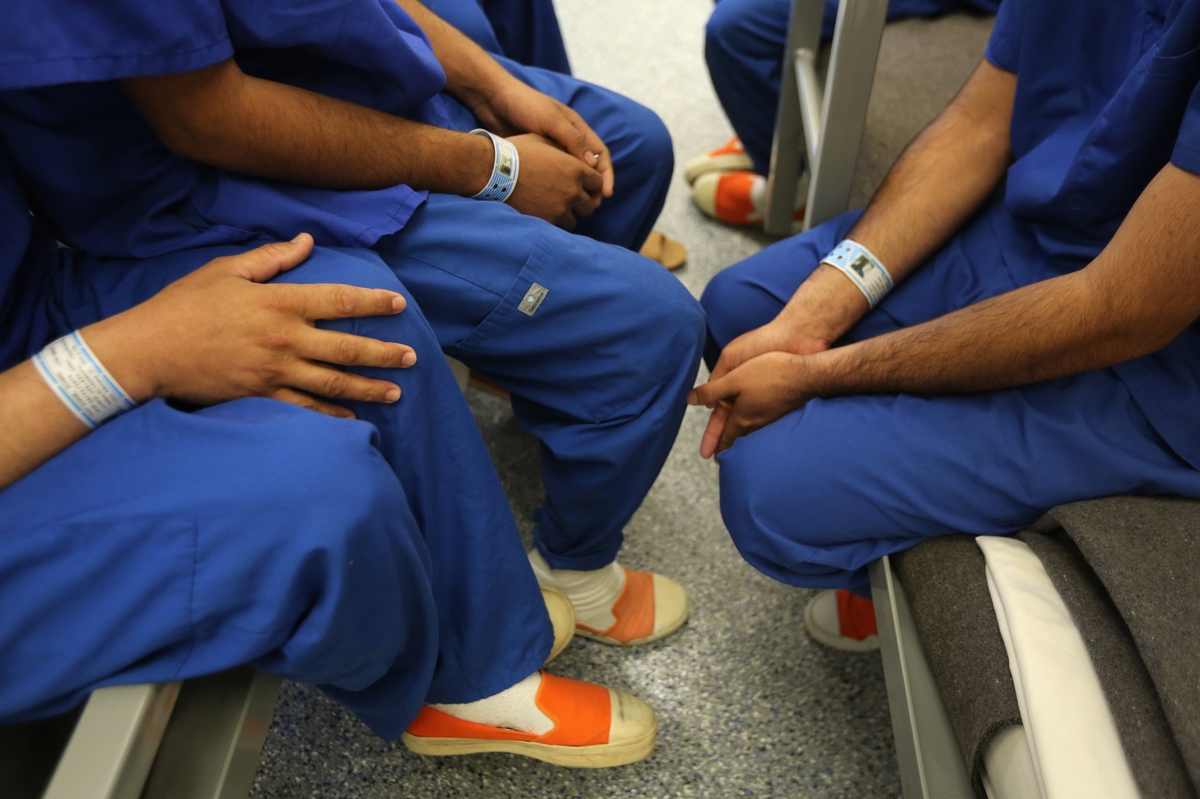 The federal immigration detention center in Florence, Ariz., is one of about 250 such facilities around the country. Immigration and Customs Enforcement (ICE) is required to house 34,000 immigration detainees per day, nationwide.

Imagine your city council telling the police department how many people it had to keep in jail each night.

That's effectively what Congress has told U.S. Immigration and Customs Enforcement with a policy known as the "detention bed mandate." The mandate calls for filling 34,000 beds in some 250 facilities across the country, per day, with immigrant detainees.

When NPR visited the Department of Homeland Security's detention center in Florence, Ariz., hundreds of men — nearly all from Latin America — were lining up for lunch. They were caught by the Border Patrol or, if apprehended away from the border, by local police and Immigration and Customs Enforcement. People can stay behind the razor-wire fences for days, weeks or years.

NPR was not allowed to talk with anyone in the detention center, but Francisco Rincon, who was recently released from Florence on bond, says he was in the facility for three weeks. Every day he was in detention cost taxpayers at least $120. Add up all the nation's detention centers and that's more than $2 billion a year.

The detention bed mandate, which began in 2009, is just part of the massive increase in enforcement-only immigration policies over the last two decades. The last time Congress passed a broad immigration law dealing with something other than enforcement — such as overhauling visa or guest worker policies — was 1986.

ICE Now Admits It Released More Than 2,000 Illegal Immigrants Due To Budget

Supporters of the directive include Rep. Hal Rogers, chairman of the House Appropriations Committee. In an email, the Kentucky Republican wrote that the bed mandate is "intended to compel the agency to enforce existing immigration law."

But Janet Napolitano, former secretary of the Department of Homeland Security, called the bed mandate "artificial" when she spoke to a House Appropriations subcommittee in April. "We ought to be managing the actual detention population to risk, not to an arbitrary number," she said.

Immigrants in detention range from violent criminals to people with no criminal history. On the day NPR visited Florence, nearly two-thirds of the 400 detainees had no known criminal record.

Take Rincon. He came to the U.S. from Mexico eight years ago and had no trouble with the law. Then he was arrested by the Border Patrol near Tucson when he took a wrong turn on his way home from work as a day laborer. Rincon has a hearing before an immigration judge in February, and he says he'll ask to remain in the U.S. legally.

"Because for Mexicans, particularly from Chiapas, where I'm from, it is very hard to get a visa," he says through an interpreter. "Otherwise, we come with visas."

That kind of story upsets immigrant-rights activists. They say ICE and local police departments are arresting more and more people for less and less.

"They're trying to pick people up for either very minor traffic violations or other minor convictions that wouldn't be considered serious, but that they can quantify as a criminal alien," says Nina Rabin, an immigration law professor at the University of Arizona.

Immigration hard-liners not only disagree with that contention, they want even more aggressive enforcement. They say the current detention system is too lax — and point to a startling statistic: As of October, a total of 870,000 immigrants have absconded after being ordered deported. They've gone back underground. ICE confirms that number. 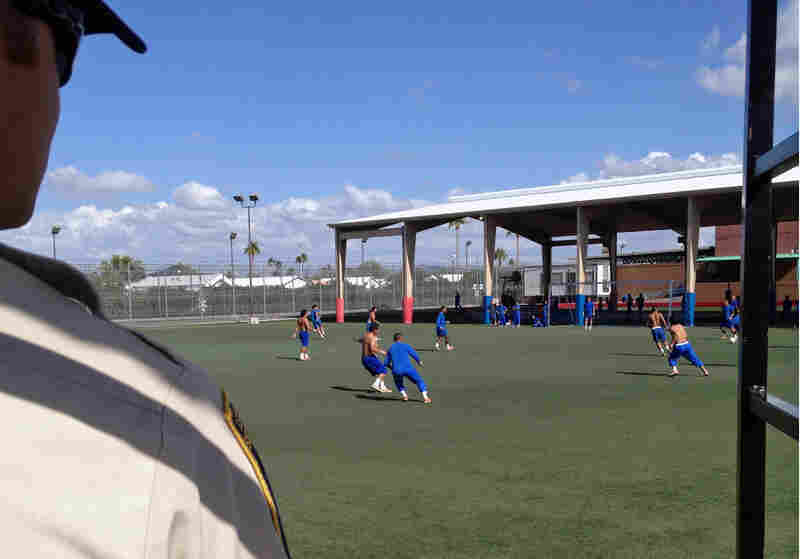 A guard watches as detainees exercise at the Florence facility. Housing one detainee costs at least $120 per day. Ted Robbins/NPR hide caption 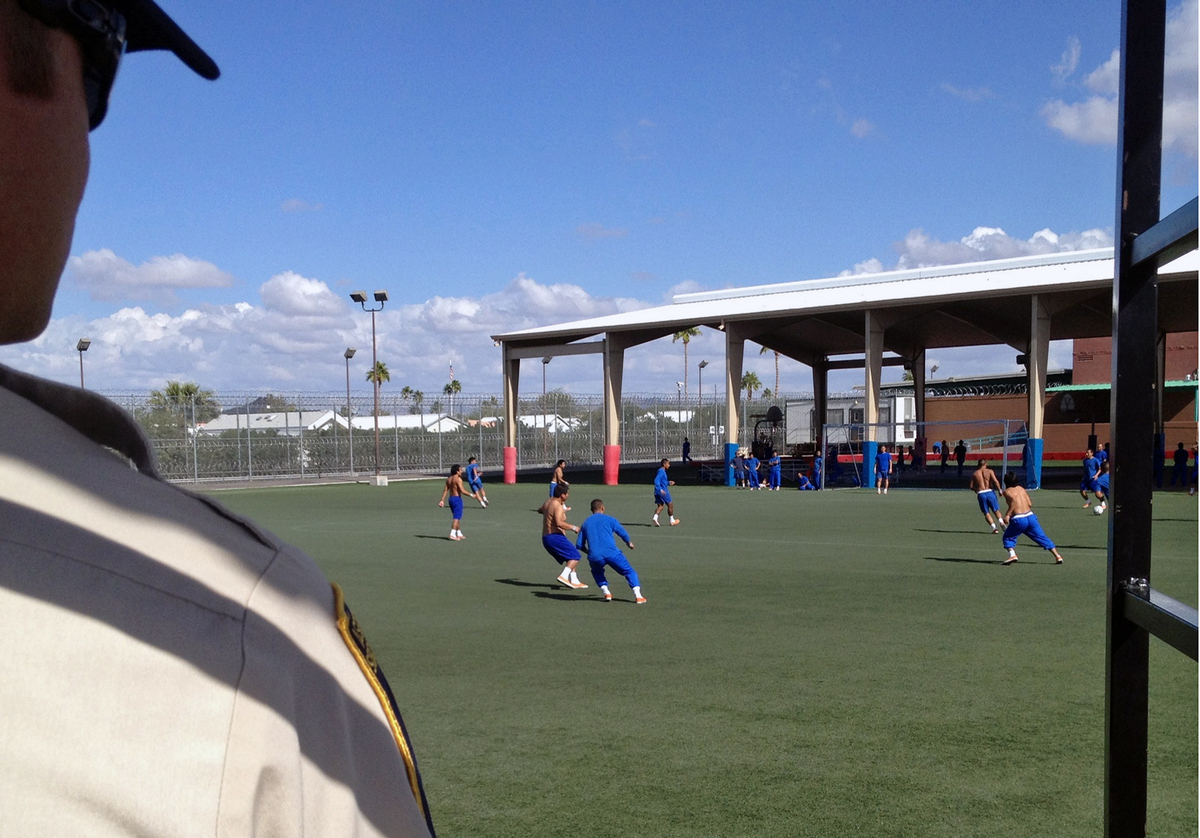 A guard watches as detainees exercise at the Florence facility. Housing one detainee costs at least $120 per day.

Jessica Vaughan, director of policy studies for the Center for Immigration Studies, a Washington-based think-tank that favors tougher enforcement, says the only way to make sure that people ordered deported actually leave is to keep them under lock and key.

"Detention is necessary because of the high risk that people are simply going to flee or skip out on their hearings," Vaughan says.

Victor Cerda, ICE's head of detention and removal during part of the George W. Bush administration, says that argument is "very simplistic." Such extensive detention, he says, is "very expensive. It's very resource intensive."

Cerda agrees that detention is the surest way to hold people, but says that building tens of thousands more detention beds is unrealistic.

"If you know what the problem is and the complexity of it, you quickly realize that there is not enough money in the government," he says. "And I don't think the taxpayers are ready to fork over the amount necessary to detain everybody."

There are options besides locking up tens of thousands of people. Alternative forms of supervision range from GPS-monitored ankle bracelets to routine check-ins with ICE. Those alternatives can cost less than $10 a day, but the budget for alternatives is only about 3 percent of the federal budget for detention.

The immigration bill passed by the Senate earlier this year calls for increased use of detention alternatives, but the House has yet to pass an immigration overhaul. It reinforced the status quo in June — voting down a Democratic-sponsored end to the detention bed mandate.

The audio version of this story, as did a previous Web version, says 870,000 immigrants who were ordered deported have absconded after being released from detention. In fact, some of those immigrants had not been detained prior to their absconding.