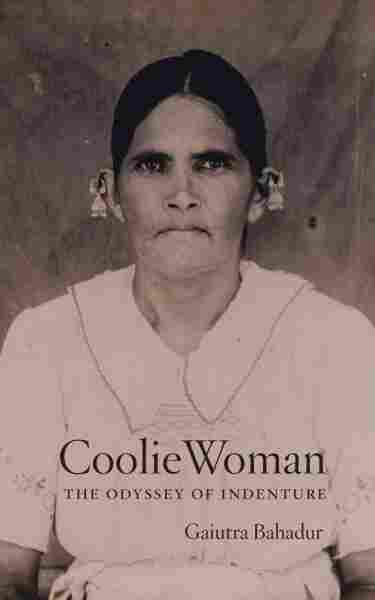 The Odyssey of Indenture

"Immigrant number 96153. That's how my great-grandmother was cataloged, that was the number on her immigration pass." says Gaiutra Bahadur, author of the new book Coolie Woman.

Bahadur set out to uncover her family's roots by following a paper trail of colonial archives and ship records that traced her great-grandmother's journey from a small village in India to the cane fields of Guyana.

Slavery was abolished throughout the British Empire in 1833. To replace slave labor on plantations in Guyana and other parts of the Caribbean, workers were brought from India as indentured servants. Bahadur's great-grandmother Sujaria was one of those workers; When she left India, she was pregnant, unmarried and alone.

"I found out that her story was extraordinary but it wasn't exceptional in that most of the women who went to West Indies as indentured laborers were like her, they were by themselves" says Bahadur. "What motivated me to write this story was to sort of rescue them from anonymity if I could. To give them names."

On Naming the Book

Kuli [Coolie] comes from the Tamil word which means wages. It was the bureaucratic term the British used to describe indentured laborers. But it became a highly charged slur. So naming the book Coolie Woman was controversial. I did it because to me, the women who migrated as indentured laborers carried enormous burdens. In India—in the subcontinent—a 'coolie' is someone who carries baggage and these women sort of carry the baggage of colonialism; the expectations of white men, the expectations of Indian men. Here they have to sort of preserve family, preserve culture.

These were sort of the most desperate women who were recruited to go, women who left probably because they had no choice. And suddenly they land in new worlds where they do have a degree of choice, because they're in short supply. There was a shortage of women and this empowered them to a certain extent, because they could have their choice of partner essentially and then didn't have to stay with that partner is someone who was better came along—they could leave. But, at the end of the day they were workers on a plantation.

On What Became of Sujaria

She met a couple on the ship from India to Guyana—a married couple—and the woman was apparently unable to have children. So my great-grandmother was in a relationship with this man and had his baby—a girl. She'd given birth to my grandfather on the ship over. So there was a child swap. My great- grandmother was transferred to another plantation and she took the baby girl with her and left my grandfather behind to be raised by this couple— I suspect the man preferred a son. My great-grandmother moved to another end of the colony—another plantation—and had a new relationship with someone there who she married and had a child with and had a business with...She recreated family. That's the endpoint of her story. She left people behind, a husband perhaps, children perhaps, siblings. In Guyana, she was able to begin again and have a new family.