Accessibility links
Despite Low Ratings, Obama Remains A Democratic Money Magnet Already the president has raised tens of millions of dollars for Democrats running for office in 2014. 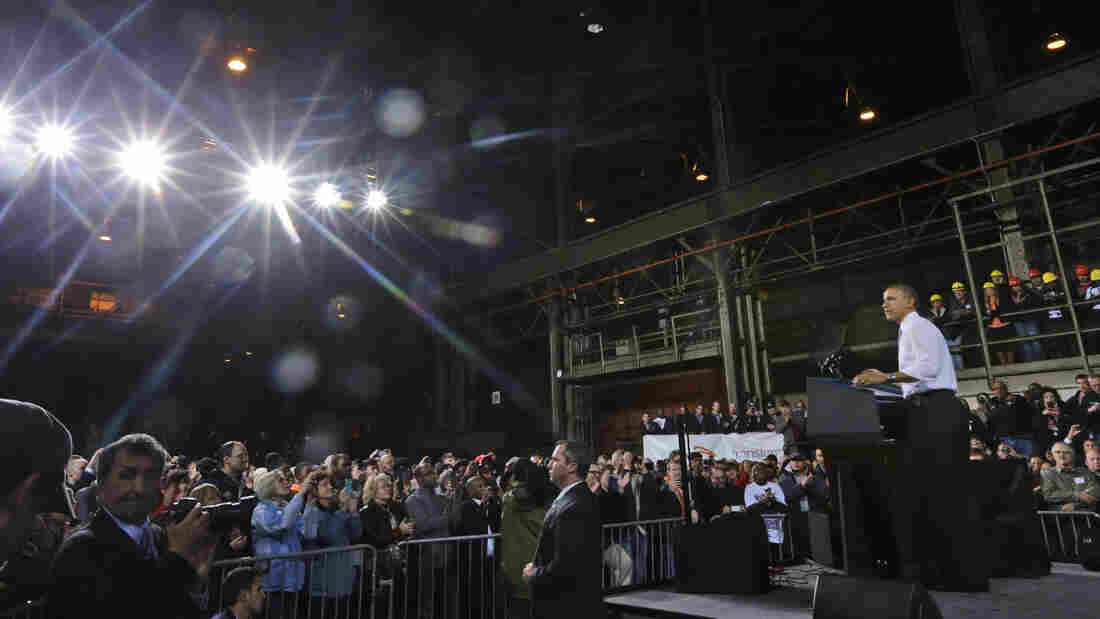 President Obama speaks at ArcelorMittal, a steel mill in Cleveland, on Thursday. Obama visited the steel mill to discuss the economy and manufacturing, and then flew to Philadelphia for a Democratic fundraising dinner. Pablo Martinez Monsivais/AP hide caption

At least one group of people has not lost faith with President Obama: wealthy Democratic donors.

Before the 2008 and 2012 presidential elections, Obama was a political rock star, and he shared the stage at fundraisers with more than a few actual rock stars. Thousands of people cheered on Bruce Springsteen, Beyonce and even Katy Perry.

Today, Obama's fundraising events are exclusively quiet affairs, and everyone in attendance writes very large checks to have dinner with the president.

Rep. Steve Israel of New York says the donors are happy to do it. Israel runs the effort to win back Democratic control of the House.

"He's very potent," Israel says. "He has done seven events for us this year, and everywhere we go he is obviously a big draw."

That's seven events just for House Democrats. The president has also done events for Senate Democrats, and for the party's general fund.

The White House often pairs these fundraisers with a public economic speech, so taxpayers pick up part of the travel costs. That's an old trick that every president has used.

"We didn't become the greatest nation on earth by accident. We did it because we did what it took," Obama told the crowd. The president then flew to Philadelphia for a Democratic fundraising dinner at the home of a Comcast executive.

There's no official total on the money Obama has brought in this year.

The Guardian newspaper came up with an estimate of $40 million over 30 separate events this year. That's far more money, and more fundraisers, than any of Obama's predecessors early in a second term.

People of both parties agree: No matter how unpopular presidents may be, they will always remain money magnets.

"Any time you have the presidency as a political party, that's just something the other party can't match," says Daniel Scarpinato, a spokesman for the National Republican Campaign Committee. "And the same was true a few years ago when Republicans had the presidency; it was reversed."

At these small fundraisers, Obama's message to donors generally amounts to: Put Democrats in office to make Washington less divisive.

"You've got to have a partner instead of a Congress of obstruction and damage," Israel says.

Whenever Obama takes to the road, Republicans try to use him to their own fundraising advantage, says Scarpinato.

"When he's out giving speeches, that's when we're having our best recruitment successes," he says. "People are actually concerned about the direction he's taking the country."

This financial arms race gets more intense every year and all the more so since 2010, when the Supreme Court opened the doors to nearly unlimited donations from outside groups.

Jessica Levinson, a campaign finance expert at Loyola Law School, says money talks, or screams, rather, in our current political system. She says this is the game, and everyone is playing to win — politicians and donors alike.

"I think the only point in the near future where the money will stop making a difference is if it simply turns off voters, and we're not exactly there yet," Levinson says.

Obama has said that not a lot of functioning democracies in the world work this way, but at the same time he acknowledges that he doesn't have clean hands on this issue either. And he doesn't plan to change course.