Accessibility links
'Ghost Particles' In Antarctica Offer Glimpse Of Deep Space By putting light sensors inside a giant ice cube that's a mile beneath the South Pole, scientists detected 28 neutrinos from beyond the solar system. It's just a start – but researchers hope the work could eventually yield a way to see through debris clouds to the core of exploding stars. 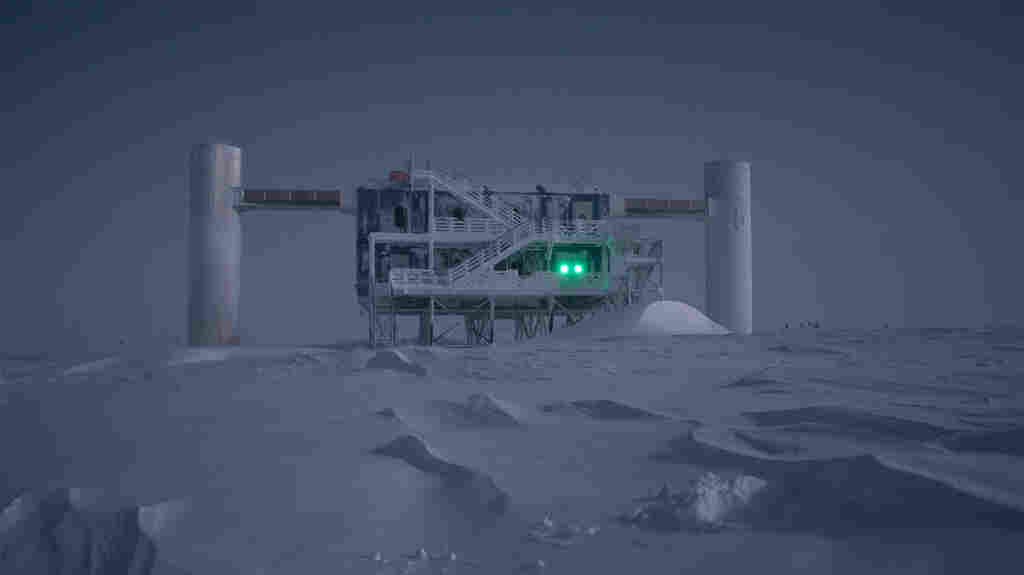 The average temperature in winter is about -72 degrees Faharenheit. The IceCube Lab is illuminated in the moonlight. Emanuel Jacobi/NSF hide caption

A new kind of telescope buried deep beneath the ice of Antarctica has, for the first time, seen a signal from distant, violent events. In doing so, it is beginning to paint a picture of a part of our cosmos that has never been observed before.

Pretty much everything we can see in the universe glows. Astronomers capture the light from stars and galaxies using huge telescopes. But even the most powerful telescopes can only see so much. The cores of dying stars, for example, are hidden behind shrouds of gas and dust that light cannot penetrate. Hidden, too, are the edges of black holes.

There is, however another way to see the universe: through the neutrino. Neutrinos are tiny, fundamental particles created in nuclear reactions, such as those inside stars. But unlike light, the neutrino can't be easily deflected. "It's a ghost particle," says Pierre Sokolsky, a physicist at the University of Utah. "It hardly ever interacts." 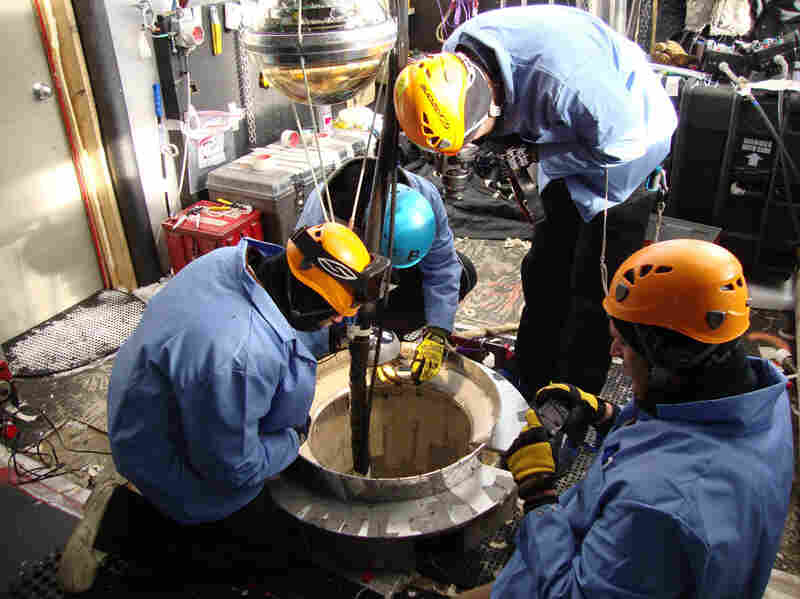 After the sensors are threaded onto the cable, the IceCube deployment team lowers them into the hole. Bahtiyar Ruzybayev/NSF hide caption

For decades Francis Halzen, a physicist at the University of Wisconsin-Madison, has dreamed of capturing a few of these neutrinos. Think of them as sort of the ultimate X-rays. They can shoot through the thickest dust and debris. That means that some neutrinos that reach the Earth have emanated from the cores of exploding stars or the edge of black holes.

"They may allow us to do astronomy that you cannot do with light," Halzen says. "That's kind of the dream."

There's just one little hitch. Since neutrinos hardly ever react with everyday matter, most of them will pass straight through the telescope you're trying to see them with.

A neutrino telescope has to be big, so that a lot of neutrinos go through it; very dense, so that a few will get caught; and transparent, because when a neutrino gets caught, it gives off a flash of light. 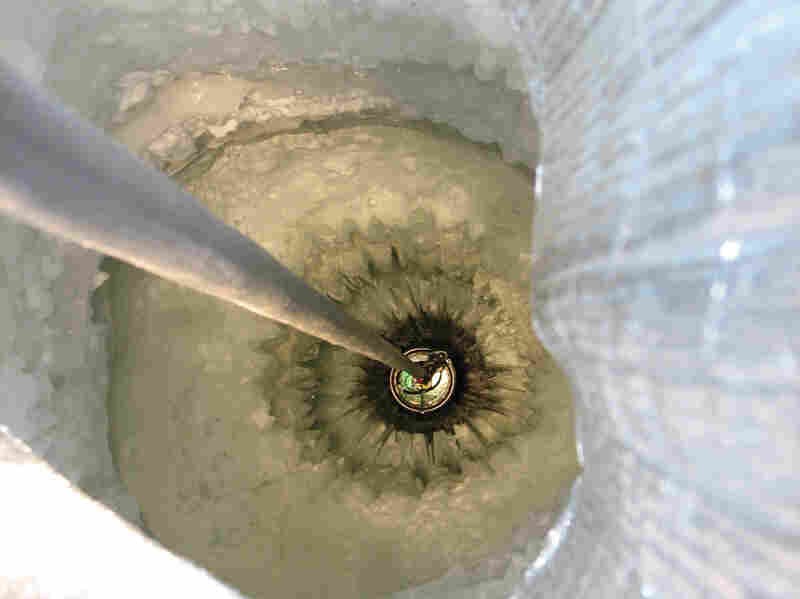 A digital optical module sensor is being lowered into a hole in the Antarctic ice. The IceCube detector on the continent consists of 86 strings of sensors, each strung deep down below the surface. Jim Haugen/IceCube/NSF hide caption 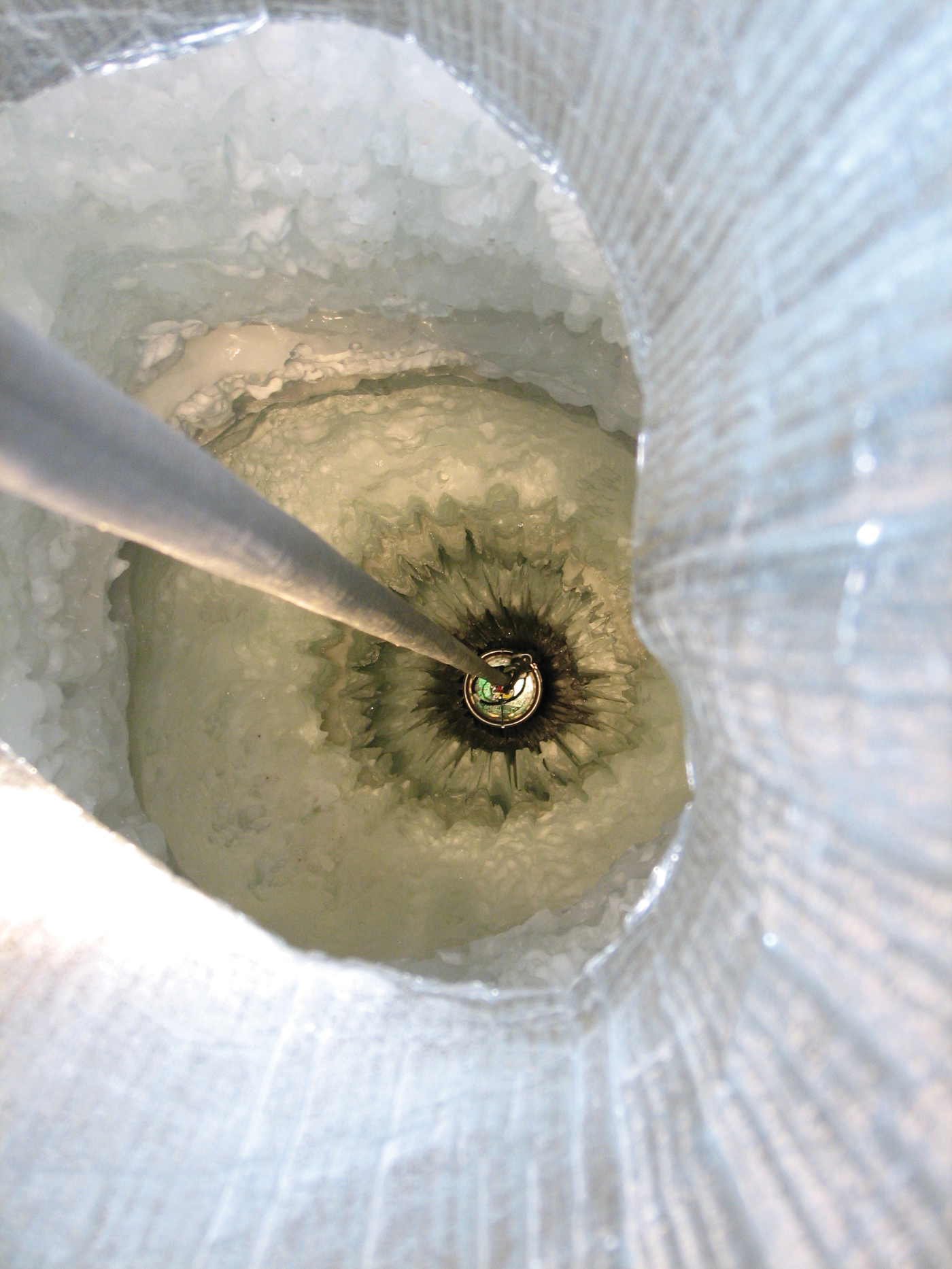 A digital optical module sensor is being lowered into a hole in the Antarctic ice. The IceCube detector on the continent consists of 86 strings of sensors, each strung deep down below the surface.

Halzen's team came up with the perfect stuff for the job: ice.

"It's the ultimate transparent medium," Halzen say. "I don't think you can make in a lab a medium as transparent as ice."

The team calculated that they would need a cube of ice that was a kilometer in length on each side. To get it, they went to the Amundsen-Scott South Pole Station. The group marked out a huge cube of ice about a mile beneath the surface. They actually called the detector IceCube. The next step was figuring out how to put thousands of light sensors inside. Halzen admits that it seemed like a long shot.

"You know it is crazy. I mean people thought I was crazy when I talked about this," he says.

"They had no idea how they were going to drill into the ice and drop these detectors kilometers into the ice," Sokolsky says.

But they worked out a system. First they used hot water to melt the ice. Then they dropped in strings of detectors. It worked.

Today, in the journal Science, the first results are in. After two years, Ice Cube has caught 28 neutrinos from beyond the solar system. It's a huge milestone for those who have dreamed of neutrino astronomy, Sokolsky says.

"When you see something like this it's really heartwarming," he says, "because it means, not only have you learned something, but this work has not been in vain."

But Francis Halzen says they're still not quite sure what IceCube is looking at. "You know, I don't think we have enough pixels to see the picture," Halzen says.

In the years to come, the researchers hope that the ice telescope will slowly fill in more and more of the "pixels" to reveal the universe's most intriguing hot spots — one neutrino at a time.