Accessibility links
Remembering 5Pointz: A Five-Story Building That Told Plenty More The walls of the warehouse complex in Queens were once covered with ever-evolving spray-painted art. But the graffiti museum (of sorts) has been painted over in preparation for demolition, and artists are mourning the loss. 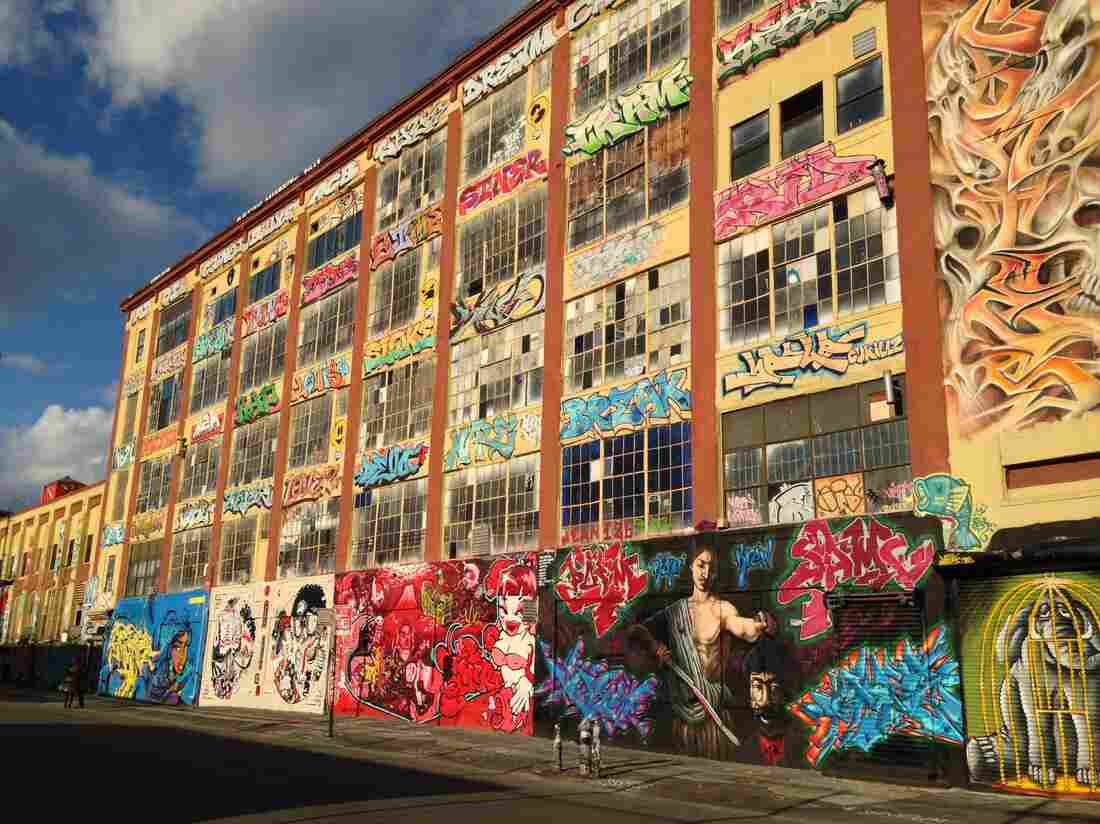 The walls of 5Pointz were once covered in graffiti. Artists worldwide came to New York to paint the warehouse surface. Bruce Wallace for NPR hide caption

This week, New York City lost a cultural landmark. The site known as 5Pointz was a graffiti museum, of sorts — the walls of a 200,000-square-foot warehouse complex covered with ever-evolving spray-painted art. It spread across a block in Long Island City right across the water from Manhattan in the borough of Queens.

But it was all gone Tuesday. The owner of the building started painting over the art in preparation for demolition. The city had approved construction of two residential towers, despite efforts to designate the complex a culturally-significant structure. Overnight and into the morning, workers covered the art with white paint.

A Wall With No Ego

Millions of people used to get their first glimpse of 5Pointz from the 7 subway line. When the line emerges in Queens after tunneling under the East River, rows of bright, angular tags would come into view. The walls of the five-story building showcased enormous paintings: a turbaned head wrapped in sky-colored cloth, an orange tiger and, near that, an even-larger-than-real-life portrait of rapper Biggie Smalls.

"They call us vandals and hoodlums and whatever you may want to call it," says 5Pointz artist Jonathan Cohen. "I think it's quite the opposite." Cohen started painting here in the early 1990s, and he has been a de facto curator of the art on the buildings since 2002. He thinks it's the whitewashers who are the vandals.

He remembers the origins of the wall: "I said, '... Let me start this place up, let me have a wall where no ego is involved, and artists could come paint. Favoritism doesn't really float. If you do a good job and your piece comes out amazing, it could last longer. If you don't, then it goes.'"

Painters came from around the city, and around the world, to contribute. James Cochran was one of them. He's a New Zealander living in London. A friend introduced him to Cohen a few years ago, and Cohen invited him to work on a wall at 5Pointz. Cochran painted a portrait of a man in a hoodie. It was aerosol pointalism — meticulously composed of hundreds of different-colored spray dots. 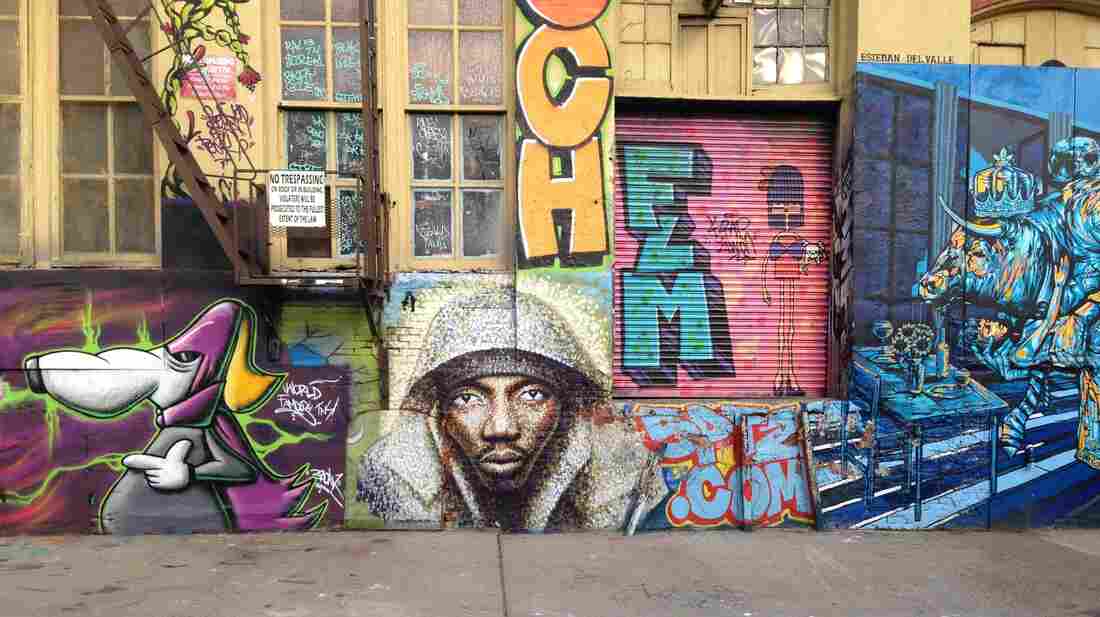 James Cochran's portrait of a man dressed in a hoodie is now covered up by white paint. Bruce Wallace for NPR hide caption 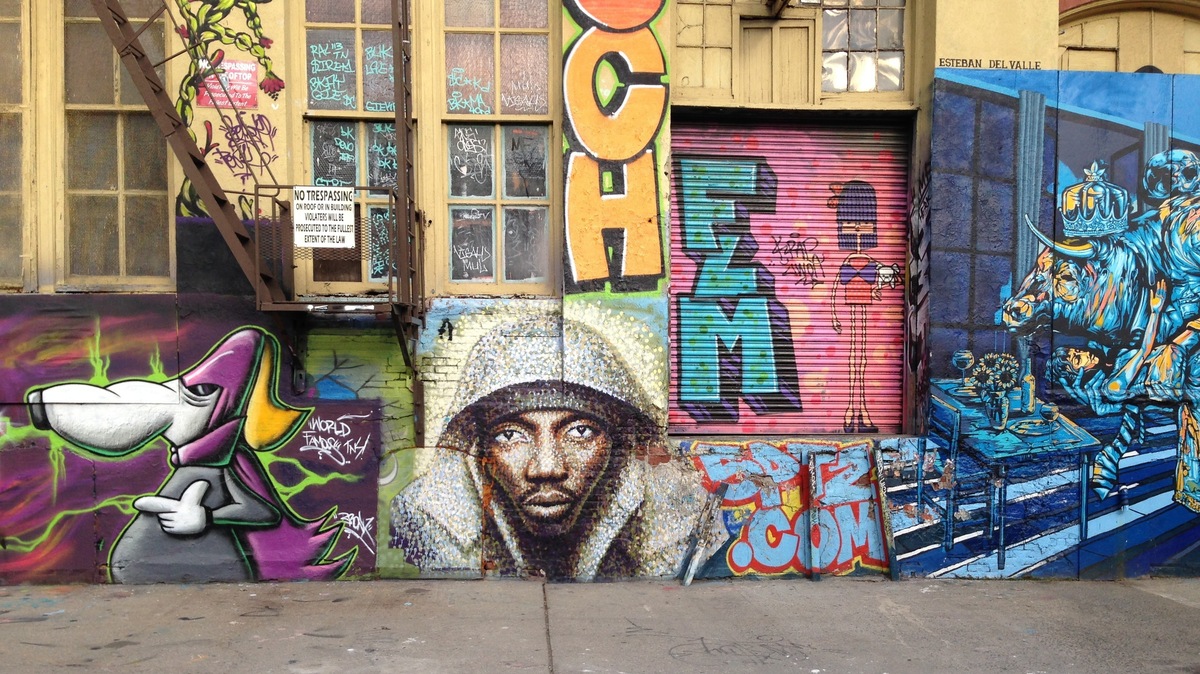 James Cochran's portrait of a man dressed in a hoodie is now covered up by white paint.

Cochran remembers what attracted him to the space: "It's just this amazing feeling, because of the sounds and the sites — those screeching trains going overhead — that kind of confirms everything that we've learned as outsiders about the hip-hop history of New York City — starting from that whole subway culture. The remnants and history is still alive, you can still feel it."

Corinne Mitchell, a Londoner studying in Manhattan, visited the wall before it was covered over. "I like the technique of it," she says. "I like how the paint seems to be dripping and you can see the drip marks. It looks like it's been done very delicately but with a messy feel as well."

And just around the corner, Ali Moussaddykine, who's from Morocco and in town for an internship, contemplated a 20-foot-tall photorealistic painting of a hand with its index finger pointing toward the sky: "You can stare and think about a lot of things, about yourself, about the city, about people who made this. It means a lot of things," he says. 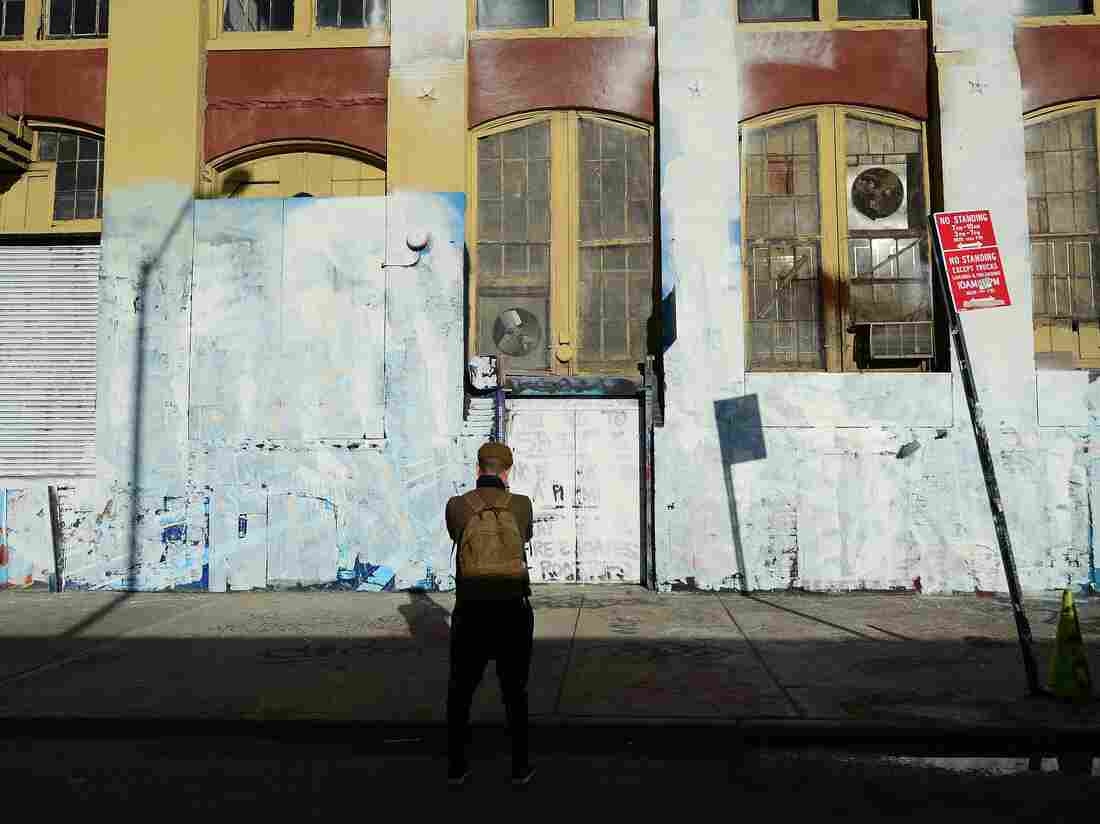 5Pointz is set to be demolished by the end of the year to make way for luxury apartments. Emmanuel Dunand/AFP/Getty Images hide caption

The building's owner says that covering the art quickly with white paint was a way of saving the artists the emotional distress of seeing their work torn down slowly over the next few months. He says it's like a band-aid — rip it right off.

The building's owner has said he'll offer wall space for graffiti artists at the new buildings. At the moment, the 5Pointz crew doesn't seem that interested in taking him up on the offer.

James Rocco has worked at 5Pointz a lot over the years. Standing under the subway tracks looking at the whitewashed walls, he says the lost art is really only part of it.

"The walls tell only a small portion of the story about what's going on here," he says. "This is a community — I've met people here that are going to be lifelong friends of mine. I've met people from all over the world that I'm friends with now. We're going to continue and keep in touch and work together. We just have to figure out where."