Accessibility links
Charter Schools In Philadelphia: Educating Without A Blueprint A few short years ago, Simon Gratz in North Philadelphia was among the state's most troubled, violent and academically underachieving high schools. Today, now a charter school, Gratz is very much on the rebound. But critics say Philadelphia can't charter its way out of its school crisis. 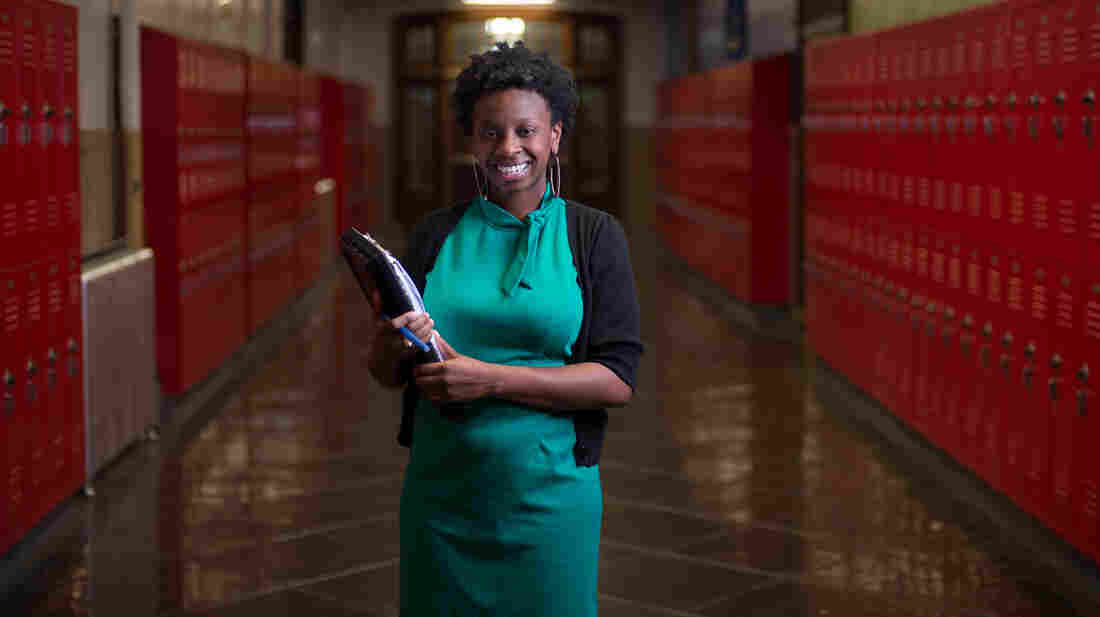 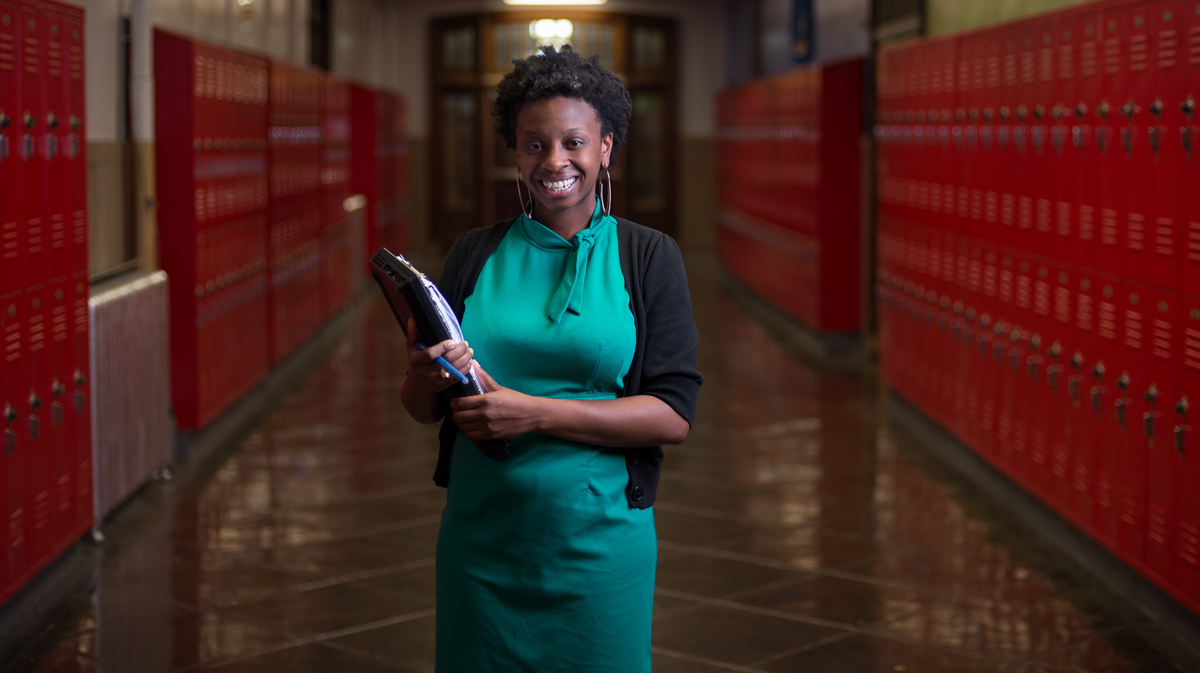 This is final story in a three-part report on Philadelphia schools in crisis.

Shayna Terrell is in a good mood: It's report card night at the Simon Gratz Mastery Charter high school in North Philadelphia, and parents are showing up in good numbers.

Terrell, Mastery's outreach coordinator, welcomes parents. Her goal on this night is to get 40 percent of Gratz parents to come to the school, meet teachers face to face, and get their child's report card. It's part of the effort to make Gratz a positive hub for a community long challenged by high rates of poverty and crime. 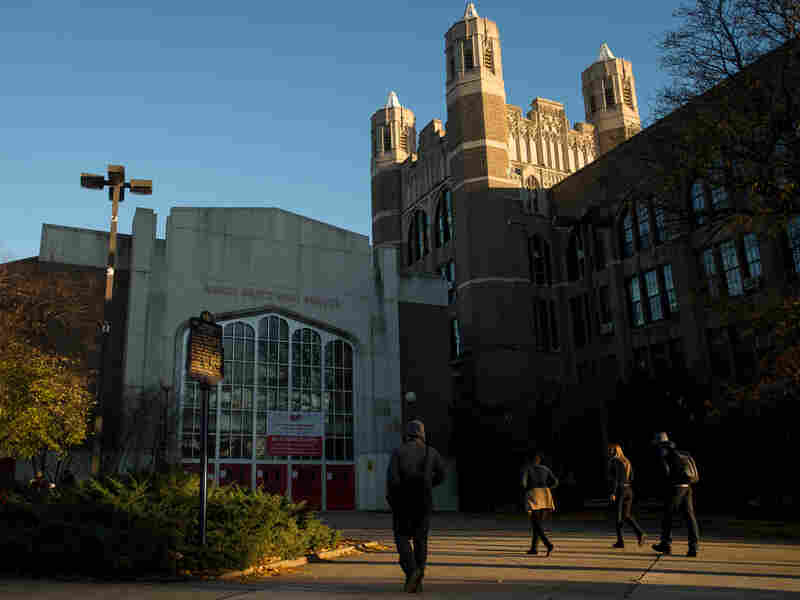 A few years ago, Simon Gratz Mastery Charter School was one of Philadelphia's and the state's most troubled, violent and academically underachieving high schools. Today, Gratz is on the rebound. Matt Stanley for NPR hide caption 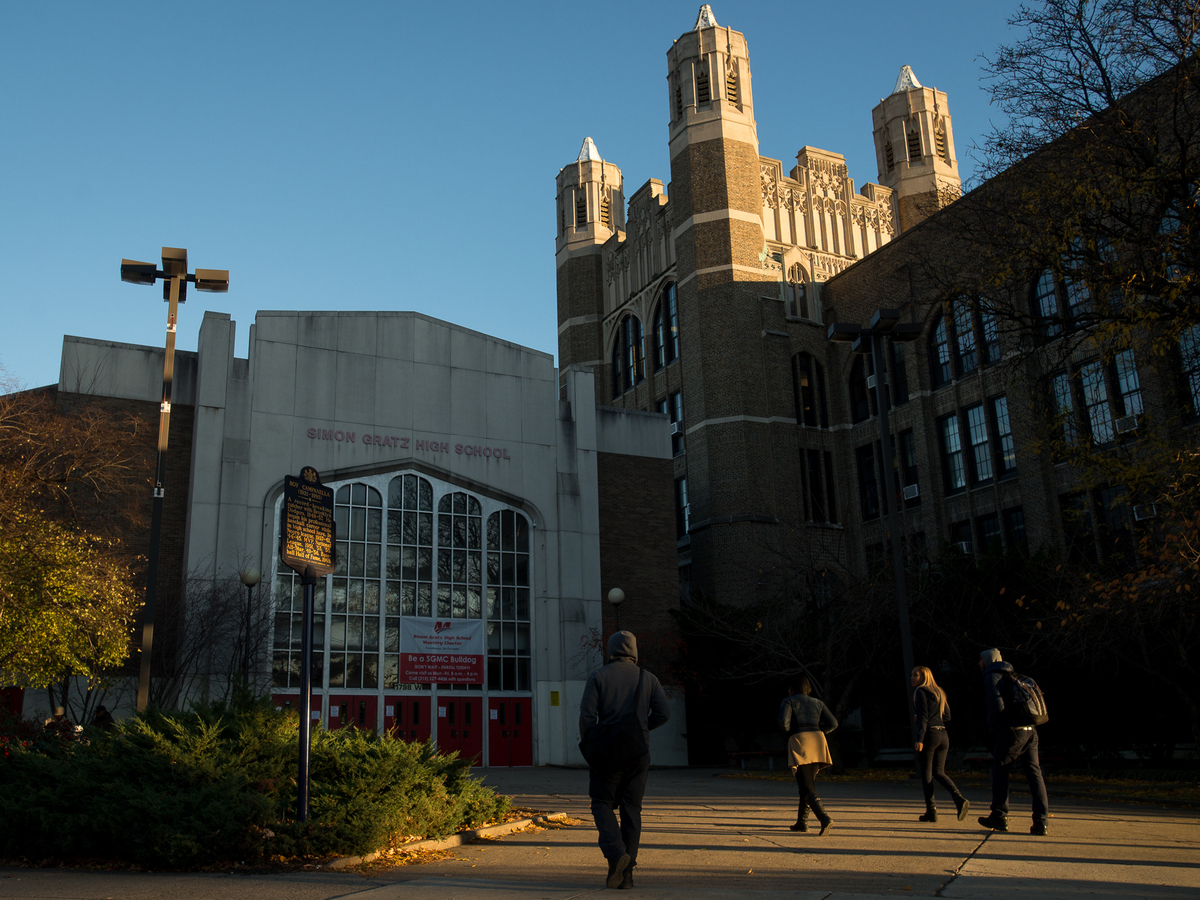 A few years ago, Simon Gratz Mastery Charter School was one of Philadelphia's and the state's most troubled, violent and academically underachieving high schools. Today, Gratz is on the rebound.

A few short years ago, Simon Gratz was one of Philadelphia's most troubled, violent and academically underachieving high schools. Today, Gratz is very much on the rebound.

Aaliyah Mont, a 17-year-old senior, was here before and after the charter takeover. She remembers when the rules suddenly got a lot tougher.

"You could see everybody rushing to school, because nobody wanted the consequences of getting a demerit," she says. "Or your house getting called. A lot of stuff that we weren't used to."

This is still North Philadelphia: There are still security guards, locked corridors, and spot-checks on the students during school time. But there's a fresh coat of paint on the walls, and a far more substantive change.

"Previously when you walked in you were greeted by school police and passed through a metal detector," says Mastery Charter CEO Scott Gordon, who had the metal detectors removed.

"There's now a reception desk. You're greeted by someone who smiles and says hello. We still have security for safety, to make sure kids are safe. But the idea was to change it to a place where you are welcomed."

Weighing The Role Of Poverty In Philadelphia's Schools

Through the city's renaissance program, a committee of parents chose Mastery Charter Schools to lead the effort to pull Gratz out of the muck. It's still a neighborhood school, and about 65 percent of the kids are from low-income families. But now it's run by Gordon's private nonprofit, not the school district. He likes to say Mastery's track record shows poverty is not destiny.

"I think if you spoke to folks prior to the turnaround, some would have assumed [in] a school like Gratz, kids couldn't achieve," says Gordon. "For lots of reasons: 'There's a culture of violence in the school; kids aren't prepared.' And it turns out not to be true. While poverty creates real obstacles, obstacles that require resources to overcome ... our kids are smart, resilient, and given the right circumstances and support, will fly and succeed."

On the academic side, Mastery reduced class size and added tutoring programs and specialized reading classes. It also revamped the curriculum. And robust intervention — whether addressing reading, truancy or poverty — has proved essential: If a student stops coming to class, Mastery will send a social worker to the house. Teachers are in frequent touch with parents, even helping link them with social assistance if they need it. The school has set up GED classes for the community, as well as free legal clinics and tax prep help for parents. 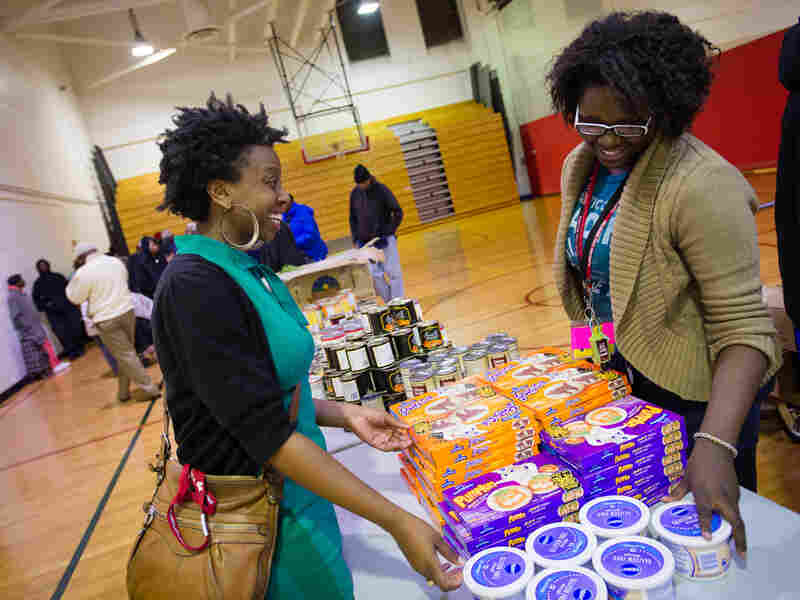 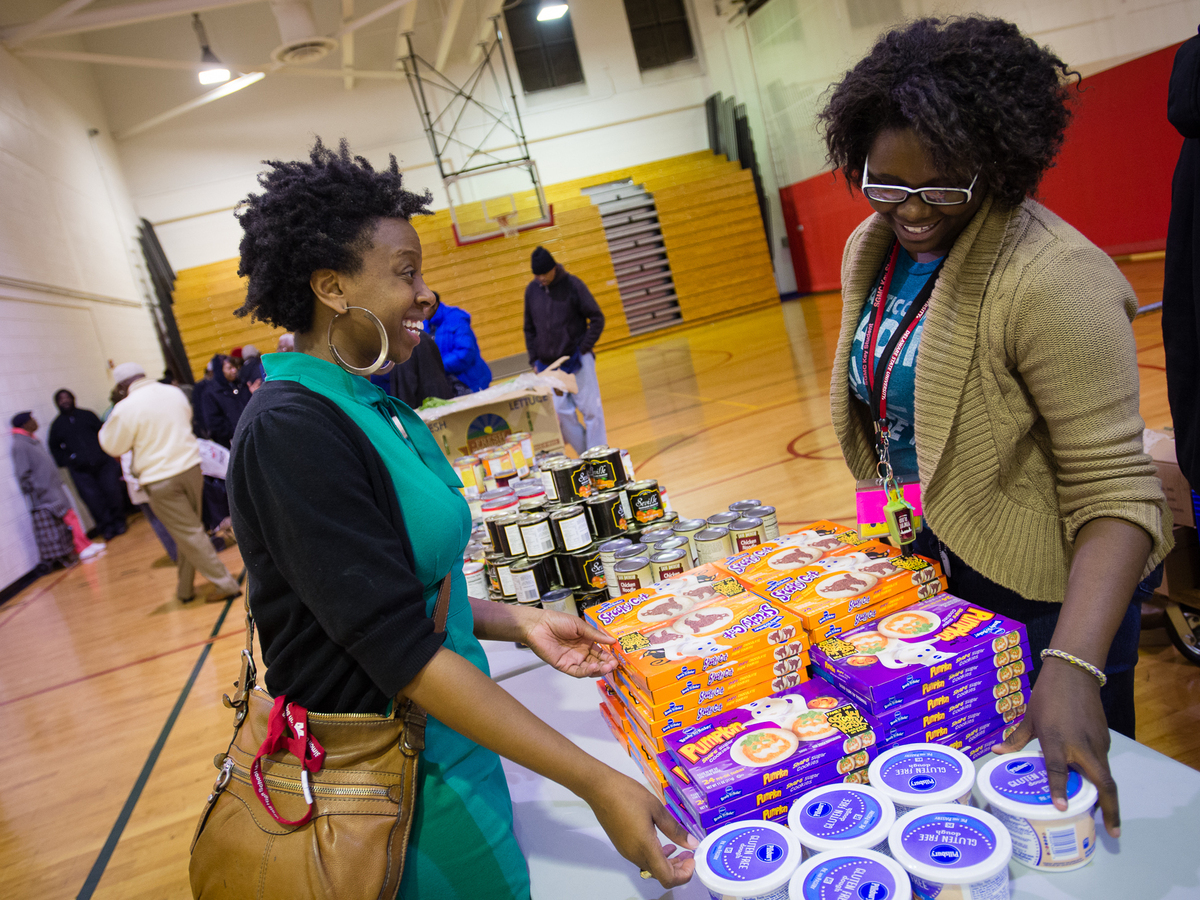 Terrell prepares for the weekly free food pantry in the school's gym.

Once a week, Craig Goldman works with a local nonprofit to turn the Gratz gym into a free food pantry for anyone in the neighborhood. It's the charter school's attempt to reach families beyond the classroom.

"I think we are doing something that there's no blueprint for," says Terrell. "To fuse education with community engagement, I think is a big mindset change and a big concept."

It's a very different model from the classic public high school in Philadelphia, and they've gotten results: In just over two years, Gratz's state math and reading test scores are up 12 and 9 percent respectively. Graduation and college enrollment rates are up as well. Incidents of violence are down 84 percent. And the percentage of students who withdrew or left school has been cut nearly in half.

But this is just one charter school, and many have long waiting lists. Critics say Philadelphia can't charter its way out of its school crisis.

"Are some of the experiments successful? Yes," says University of Pennsylvania historian and sociologist Tom Sugrue. "Have they proved to be that silver bullet for transforming urban public education? No."

Sugrue says many kids can't get into charter schools and feel trapped in a large underfunded district whose support is unfairly pegged to local property taxes. He says the district gets less money overall than nearby suburban schools, especially given the huge number of high-risk, high-poverty kids it serves.

"The funding formula is, along with persistent racial segregation, is a formula for disaster," says Sugrue. "Concentrate poor, disadvantaged, minority students together in school districts with crumbling infrastructure, with large classes. And then give them less money to do the job."

Sugrue and others question whether successful charters are really scalable: They argue that replicating this kind of turnaround is simply too expensive and hard. Mastery Charter raised more than $1.5 million from private sources, including foundations, to improve Gratz. 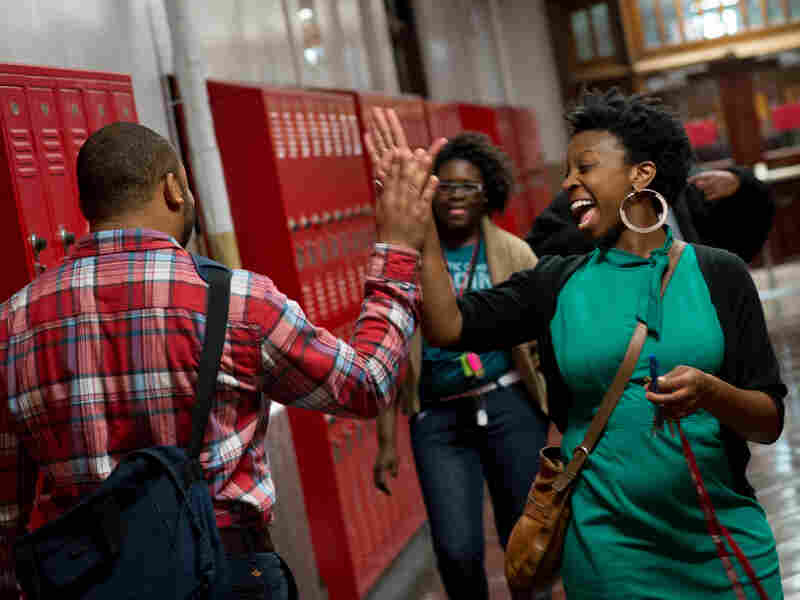 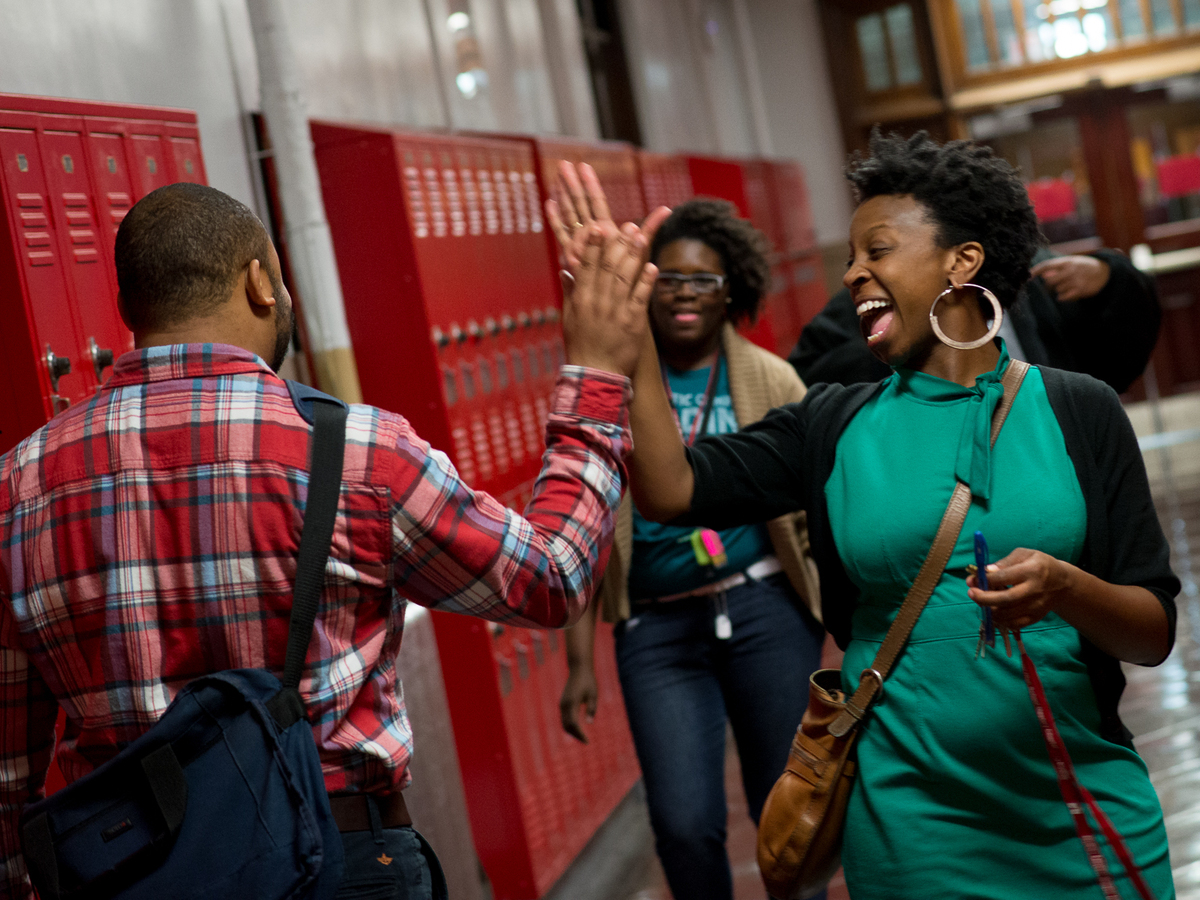 Terrell greets students in the hallway.

Historian Diane Ravitch doesn't think it's money well-spent: she says nationally the data show charters are proving no more innovative or academically successful than their public school counterparts. "What the charter and choice movement has done is sell the line, 'All you have to do is look out for your own child.' So escape if you can and leave everyone else behind. Public education is a civic obligation," she says.

It's estimated there are about 2 million students enrolled in charter schools across America. Charters vary widely across states and within school districts. Ravitch and other critics say charters — in Philadelphia and elsewhere — are creating an unfair, publicly funded dual-track system. For every successful "turnaround" school, she says, there will be scores of "dumpster schools" where underachieving students are mired in mediocrity.

Foundations insist that charters are creating pockets of success, and in many cases are helping at-risk minority and low-income kids.

Education Secretary Arne Duncan has praised charters as a chance for students in cities like Philadelphia to have more choice. He says they have in some cases "debunked the insidious myth that poverty is somehow destiny."

And at Gratz, anyway, 17-year-old Aaliyah Mont says the changes saved her. New teachers, her basketball coach and others, she says, motivated her to make the school's motto — "Excellence. No Excuses" — more than a slogan.