Accessibility links
Electric Bus Fleet Brings Chinese Manufacturing To America The Shenzhen-based company BYD started producing cellphone batteries and moved to electric cars. Now, it's rolling out a fleet of electric buses in the U.S., a first for a Chinese auto manufacturer. 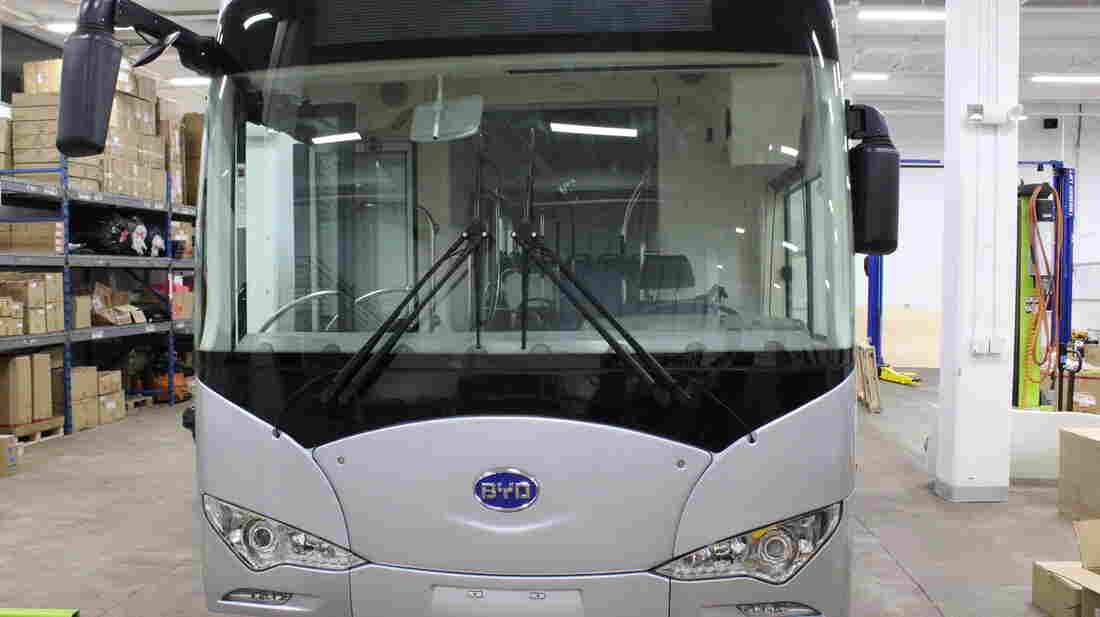 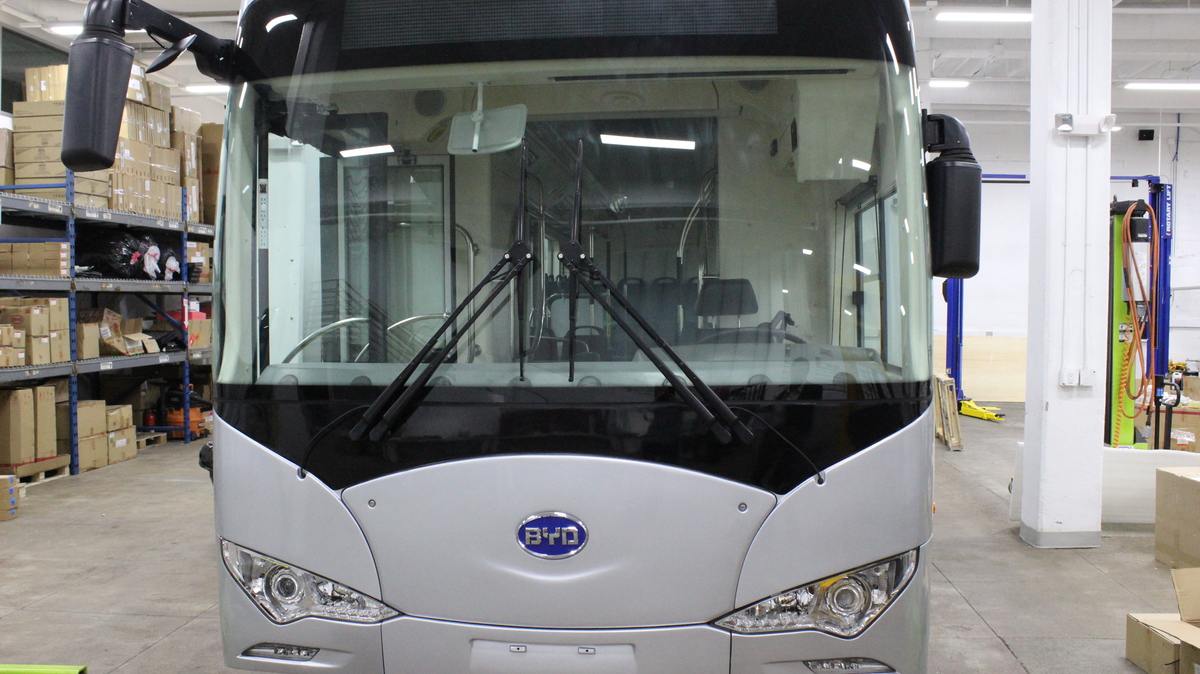 BYD's K9 electric bus can run for 155 miles on a single charge.

Public transit vehicles may be the key to China's success in the U.S. auto market. Chinese company BYD, based in Shenzhen, is manufacturing electric buses. It's an appealing option for a place like California, where emission standards are strict.

At BYD's North American headquarters in Los Angeles, one of the 40-foot electric K9 buses sits on display. BYD Fleet Sales Manager James Holtz sits in the driver's seat and pushes the power button on the dashboard.

Unlike a grumbling diesel engine, this electric bus is quiet. Holtz walks out to the rear of the vehicle and opens the back hatch to reveal its electric components.

This bus can run up to 155 miles on a single charge. It's equipped with huge battery packs located inside the bus columns, behind the rear wheels and mounted on top of the bus.

"It takes about five hours to fully charge our bus from zero state of charge to 100 percent," says Holtz.

"It offers opportunities to implement and evaluate a new technology," says Richard Hunt, general manager of Metro's Transit Capital Programs. "They call this the cutting edge or the bleeding edge and we want to be cutting, we don't want to be bleeding. So we're going to evaluate these vehicles very carefully."

Those buses LA bought will be manufactured up the road in Lancaster, Calif., next year. Micheal Austin, vice president of BYD America, says it's a huge step for China's auto industry. 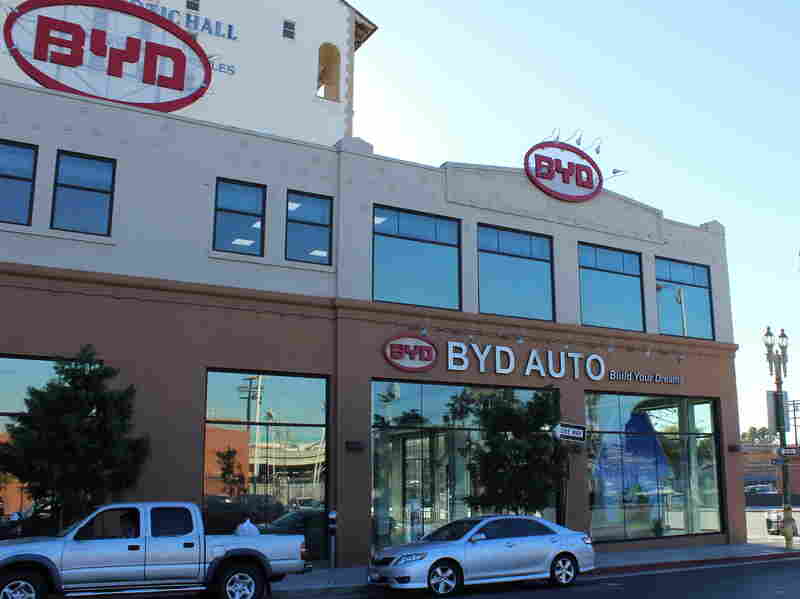 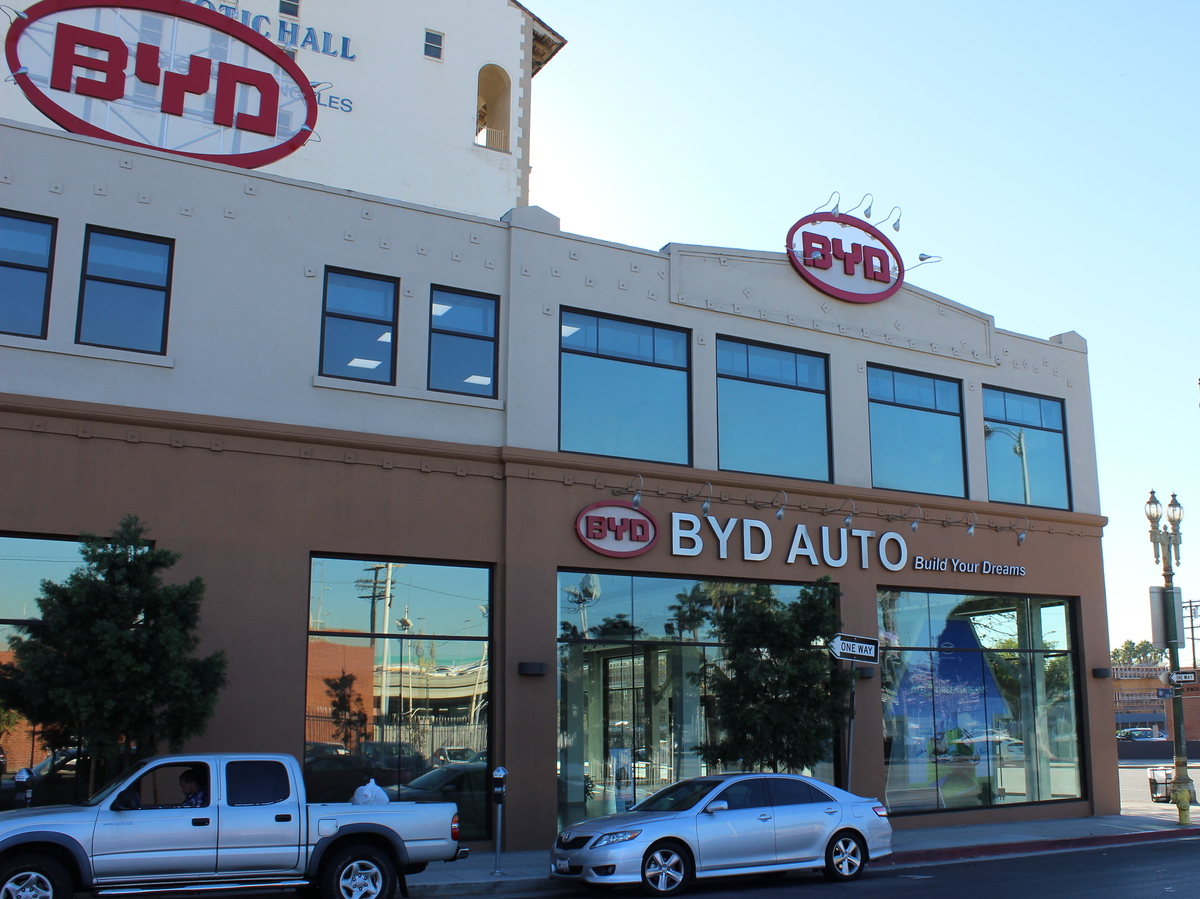 BYD's North American headquarters is located in Los Angeles. Next year, the Chinese-based auto manufacturer will roll out electric buses in LA and Long Beach.

"We are the first Chinese vehicle company to come to the U.S. and build a manufacturing plant," says Austin.

The company received $2 million in tax subsidies to build its North American headquarters in LA. But the California Labor Commissioner's office has now hit BYD with a $99,000 fine. The plant in Lancaster, which has yet to open, is under investigation for paying workers below minimum wage. However, Austin argues BYD has always complied with California labor laws.

BYD, which stands for Build Your Dreams, started as a battery manufacturer for cellphones, then branched out to solar panels, LED lights and electric cars.

"It's a fascinating company because it's incredibly diverse," says Alan Ohnsman, an auto reporter at Bloomberg News.

"It's almost like a small-scale GE or some sort of large traditional conglomerate. It's in a lot of fields," he says. "But batteries are the core of what it does."

It was once the fastest growing automaker in China. Even Warren Buffett bought a 10 percent stake in the company.

"Their auto business has dropped off a bit and the excitement is not what it once was, but they were a rapid, rising company," says Ohnsman.

"This is a new, emerging segment and they want to own it," says Ohnsman.

BYD is already considered the world's largest manufacturer of electric buses, which go for about $800,000. That's over double the cost of a traditional diesel bus. However, long-term savings on fuel and maintenance could go a long way. That's what BYD is hoping to prove in the coming months with trial runs across the U.S.