Accessibility links
Not My Job: Coach Muffet McGraw Gets Quizzed On Tuffets The only other Muffet we've ever met is the Little Miss, so we've invited McGraw — women's basketball coach at University of Notre Dame — to play a game called "So what exactly is a tuffet anyway?" Three questions about nursery rhymes and children's songs. 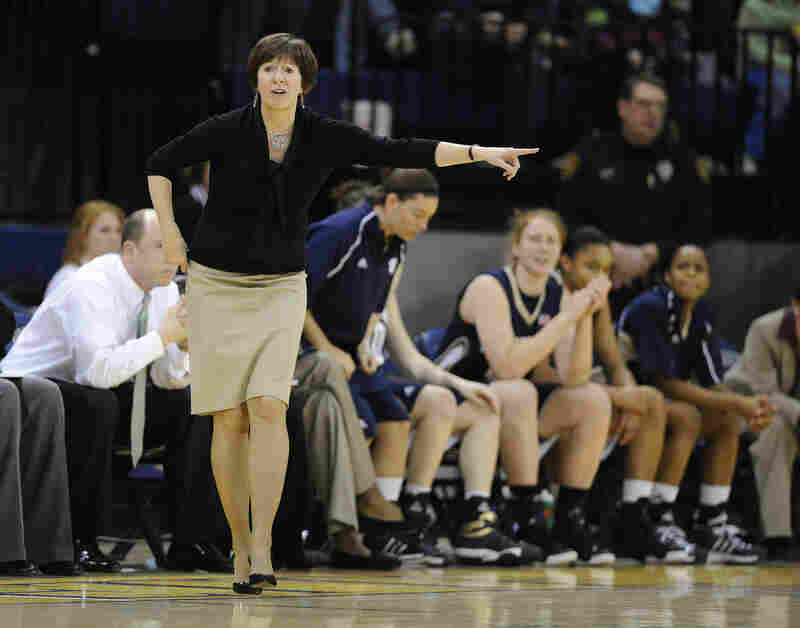 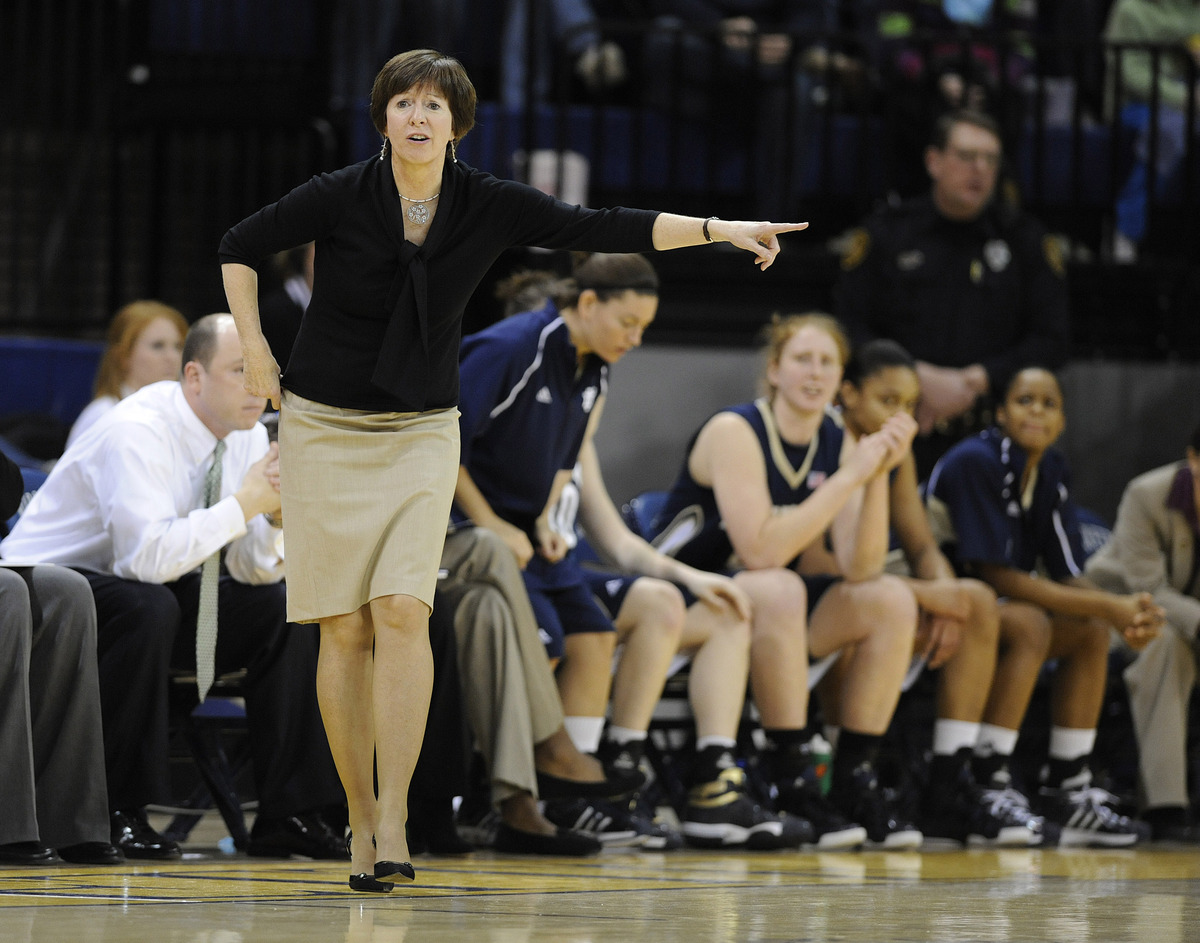 University of Notre Dame women's basketball coach Muffet McGraw has led her team to five NCAA Final Fours, is the reigning Naismith College Coach of the Year, and has a spot in the Women's Basketball Hall of Fame. On top of all that, she could almost certainly beat most NPR listeners at a game of H-O-R-S-E.

The only other Muffet we've ever met is the Little Miss, so we've invited McGraw to play a game called "So what exactly is a tuffet anyway?" Three questions about nursery rhymes and children's songs.

And now the game where we take some body from the Hall of Fame and bring them to the Hall of Lame. It's called Not My Job.

SAGAL: She is in the Women's Basketball Hall of Fame. She is the reigning Naismith College Coach of the Year. And I have no doubt, she could beat every single person in this theater at Horse if she spotted us the first four letters.

MUFFET MCGRAW: Thanks, I'm excited to be here.

SAGAL: I'm excited to have you.

SAGAL: I was a little intimidated. I know what basketball coaches are like, and yet we've spent a few minutes together already, and you haven't tried to choke me. I feel good. So you seem very nice for a college basketball coach.

MCGRAW: It's my persona in public.

SAGAL: Really? You're saying if we were, like, backstage, and you wanted something out of me, you'd be hurling balls at my head?

SAGAL: You know, we don't have a lot of time. Let's get to the most important question: Muffet? Muffet, is that your actual name, or is that a nickname?

MCGRAW: It's my legal name.

SAGAL: It's your legal name, but you're saying you weren't born with that name?

SAGAL: You're nodding. Clearly people have asked about this before, right?

SAGAL: So how did you get the name Muffet, then?

MCGRAW: Oh, it's really not a fun story.

SAGAL: What kind of tragic, unhappy story ends with someone getting the name Muffet?

SAGAL: Really, that's where it came from?

MCGRAW: Yeah, it really did.

CHARLIE PIERCE: Would you prefer Tuffet or Spider?

MCGRAW: Well, you know, when I came there, Digger was the men's coach.

MCGRAW: So I thought I fit right in.

SAGAL: Yeah. Now did you grow up playing basketball?

MCGRAW: I did. I played professionally for the California Dreams. I played in college for St. Joe's in Philadelphia.

SAGAL: Wait a minute, you played professionally for the California Dreams? This was a pre-WNBA women's professional league?

MCGRAW: It was the first women's league. So I got my husband a T-shirt that said my wife is a Dream.

SAGAL: Did you get tired of the wild lifestyle of the professional basketball player, the entourage, the hangers-on, the...

FAITH SALIE: All the kids you didn't know you had?

SAGAL: So I have to say, you don't seem like you have, like, shall we say, the enormous height of a professional basketball player.

MCGRAW: I was a point guard.

SAGAL: Now imagine that I don't know anything about basketball. I'm actually an expert.

PIERCE: Hold on, Peter, I'm getting the image here now.

SAGAL: Just pretend. Let me stand in for people who are so ignorant of basketball they don't exactly know what that means. Would you explain what that means?

MCGRAW: Well, the point guard is generally smaller than the other players on the team and bossier.

BABYLON: They run the show. They're like - she's like the Magic Johnson, even though he was big, Peter.

BABYLON: He's a big (unintelligible). She's like a John Stockton. How's that?

PIERCE: There you go.

BABYLON: And she passes the ball, she shoots from the outside.

PIERCE: Of course John Stockton was one of the dirtiest players in the history of NBA. Were you dropping the elbow as people came around the (unintelligible) and stuff?

PIERCE: I thought so.

BABYLON: You've got to.

SAGAL: I've always wanted to know, because I watch basketball on TV, and there are moments when, you know, the coach calls on the players, and he or she is just yelling at them. And you can't tell because of course you just see it on TV. What are you saying at that moment? I mean, are you trying to motivate the players? I mean, don't they have motivation enough?

MCGRAW: They do, they do. We're talking about practice the next day and how hard it's going to be if we don't win this game.

SAGAL: Really, you're sort of threatening them?

SAGAL: But let me try to - because I want to get a sense of this because it's not a world I know anything about. Let's assume that you are coaching, say, me. And you're watching the sidelines, and I'm not doing a good job. I know that's hard to imagine, but let's assume.

SAGAL: And you call me over, and give me the full-on Muffet of the sidelines. What would that be like?

MCGRAW: Why did I give you a scholarship?

SAGAL: I'm going to get back out there and play, coach.

SAGAL: Everybody knows that the woman's game is just as hard, just as demanding and just as competitive as the men's game, but is the style different? Is like trash-talk different in the women's game?

MCGRAW: No, it really, it's an art form.

MCGRAW: Yeah. We don't start it; we finish it.

BABYLON: Honestly, you know, I see you guys in, you know, in the big tournament versus NIT all the time. So how does it feel to have the basketball swag on campus versus the fellows?

SAGAL: And this is Indiana. Basketball is a religion here.

PIERCE: Are you kidding me?

SAGAL: Well, I know Notre Dame. I mean, Notre Dame, you've got to win at Notre Dame, right, no matter - it's a very intense environment. Do you welcome that?

MCGRAW: I do, I do. We have the best fans in the country, though. They are awesome.

SAGAL: But they don't drive you crazy?

MCGRAW: Not at all.

SAGAL: Coaching here is a nationally known position. Have you gotten press attention? Have you gotten like national press for the work you've done here? What's that been like?

MCGRAW: Yeah, we do. It's been great. You know, Sports Illustrated, when we first came out here, they called, and my husband answered the phone. He's like hey, Sports Illustrated is on the phone. I was like dang, that's a great sports information they've got. So I came down to the phone and picked it up and said hello.

SAGAL: Well, Muffet McGraw, we're delighted to talk to you here, and we've invited you here to play a game we're calling...

CARL KASELL: So what exactly is a tuffet, anyway?

SAGAL: So you're the first Muffet we've met other than Little Miss herself. So we thought we'd ask you about her world: nursery rhymes and children's songs. Answer two out of these three questions about Mother Goose and her offshoots. If you do, you'll win our prize for one of our listeners, Carl's voice on their voicemail. Carl, who is Muffet McGraw playing for?

KASELL: Muffet is playing for Barbara Twitchell of Elkhart, Indiana.

SAGAL: OK, here is your first question: the nursery rhyme Goosey Goosey Gander is, according to some experts, really about what: A, consorting with prostitutes; B, an incident in the late 18th-century British-Dutch naval war; C, goosey, goosey ganders?

SAGAL: You're going to go with C, it's actually about goosey ganders?

SAGAL: No, it's actually about consorting with prostitutes.

SAGAL: According to some scholars, goosey was a slang term for ladies of the evening, if you will. All right, so you're down a little bit. If you were your own player, what would you say?

MCGRAW: I can do it.

SAGAL: We all know George Porgie pudding and pie, kissed the girls and made them cry, OK. According to some scholars, that nursery rhyme is really full of veiled references to what: A, the discovery of the element Oxygen; B, a gay sex scandal in the court of King Charles II; or C, pudding and pie?

MCGRAW: Could I get a hint?

SAGAL: Do your players get a little stepladder to dunk? No. Can you get a hint...

SAGAL: The gay sex scandal in the court of King Charles II? You are correct.

SAGAL: Georgie, or George was a courtier who was appointed a gentleman of the bedchamber to the king, and rumors flew. All right, that's very good. You have one right with one to go. So it's coming down to the final minutes. The French kids' song "Alouette," you know, (humming), that one, very popular with kids all around the world. It may not be as popular if the kids knew what they were really singing about.

SAGAL: Why are you hissing at her?

SAGAL: You're going to go with C. When the crowds call out plays, do you follow the plays?

SAGAL: "Alouette," an alouette is a lark. French Canadians love to eat larks, and it's all about plucking all its little parts so they can eat it. Carl, how did Muffet McGraw do on our quiz?

KASELL: Muffet had two correct answers, Peter, so she wins for Barbara Twitchell.

SAGAL: Well done. Muffet McGraw is the head coach of the Notre Dame women's basketball team. Muffet McGraw, thank you so much for being with us. What a pleasure.

SAGAL: In just a minute Carl percolates up some lunch in our listener limerick challenge. Call 1-888-WAIT-WAIT to join us on air.