Accessibility links
Comet Fans Psyched For A Celestial Feast On Thanksgiving Day Astronomers will turn skyward to glimpse ISON, an unusual comet from the outermost edge of our solar system that is now plunging toward the sun. ISON could yield clues to the formation of the solar system, and may become visible to the naked eye in December — if it survives. 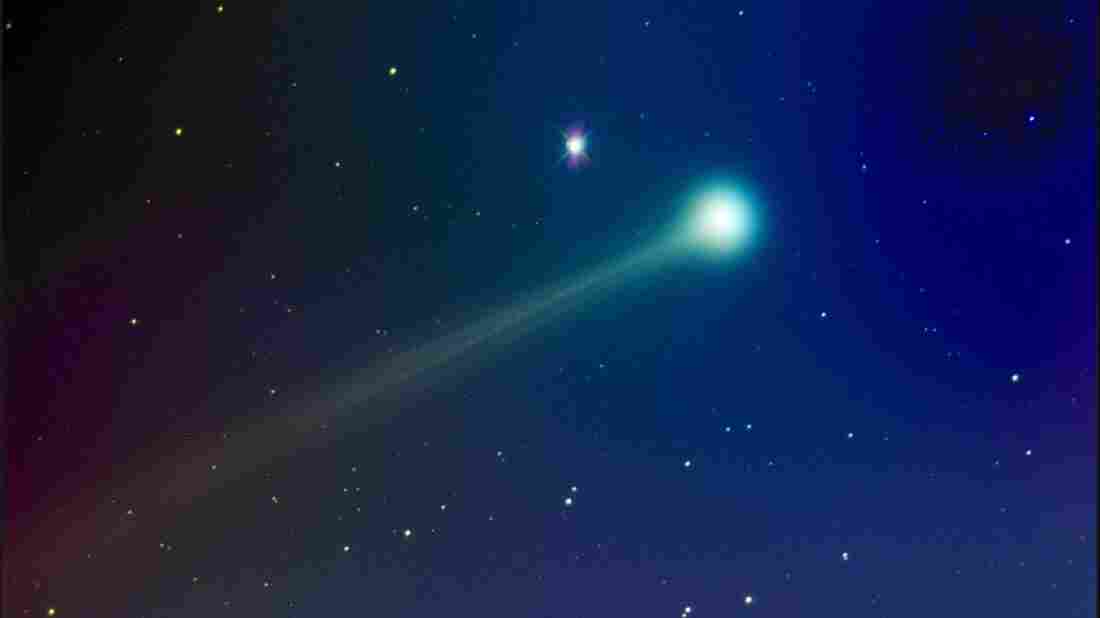 While most Americans are sitting down to Thanksgiving dinner Thursday, astronomers will be looking up at an unusual comet passing near the sun.

The comet, known as ISON, has been hyped as "the comet of the century." It may not quite live up to that billing, but astronomers say it is a one-of-a-kind object.

The story of comet ISON started in September 2012 when a pair of astronomers in Russia spotted it out beyond the orbit of Jupiter. Two things stood out right away: First, ISON was really bright; second, it was going to pass close to the sun and Earth.

Some media outlets began making incredible claims — that ISON might, for example, become brighter than the moon in the night sky.

"I don't even know who came up with that — that's just patently ridiculous," says Karl Battams, an astrophysicist at the U.S. Naval Research Laboratory in Washington, D.C., who studies comets. "Straightaway there were unrealistic expectations of it, but nonetheless, we knew it was going to be interesting."

That's because ISON is unique in a couple of ways. First, it's a chunk of ice and rock from the Oort cloud, a huge field of debris beyond Pluto that's filled with leftovers from the solar system's formation.

Comet ISON is also passing very close to the sun. It's on an orbit, Battams says, that will take it "through the sun's atmosphere."

Using solar-observing spacecraft, Battams hopes to see the comet boil as it passes by. "The surface is going to be vaporizing furiously, and that's going to release a lot of interesting material that hopefully we can study," he says.

If Comet ISON Survives The Sun, The View May Be Spectacular

It could yield clues about how our solar system formed. And because much of the stuff released will get tangled in the sun's magnetic fields, it could also work as a sort of dye, illuminating the magnetic workings of our nearest star.

Battams and other astronomers will be spending Thanksgiving Day watching the comet from atop Kitt Peak in Arizona. "We're going to be roasting a ball of ice while people are roasting their turkeys," he says.

Assuming the comet survives its roasting, it could become easily visible in the December sky. Amateur astronomers like Mike Hankey are gearing up for what they hope could be quite a show. "My whole month of December is planned around this comet," Hankey says.

But that will only happen if the comet survives its trip around the sun. "At any moment it could fall apart, it could fizzle out, big chunks could break off," Battams warns. Even if it can stand the heat, the sun's gravity could tear it to shreds.

Only time will tell whether ISON reappears from behind the sun as a dramatic streak of fiery ice, a small smudge or nothing at all. "Comets are like cats," Battams says. "They've got tails, and they do exactly what they please."