Accessibility links
Don't Stuff The Turkey And Other Tips From 'America's Test Kitchen' Jack Bishop and Bridget Lancaster of the public TV series share tips for buying, seasoning and cooking a turkey (hint: bigger isn't necessarily better, keep lots of salt around, and give the bird a break before carving). They also give advice on how to make some of their favorite side dishes. 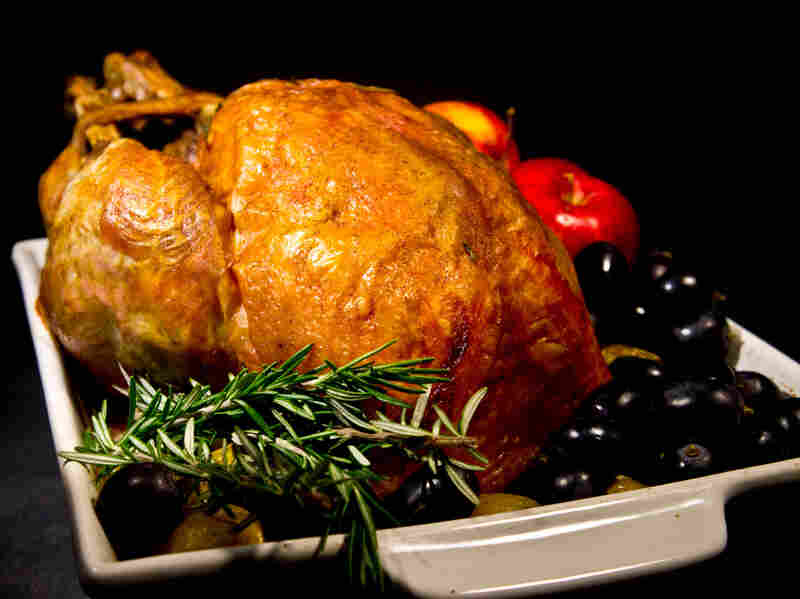 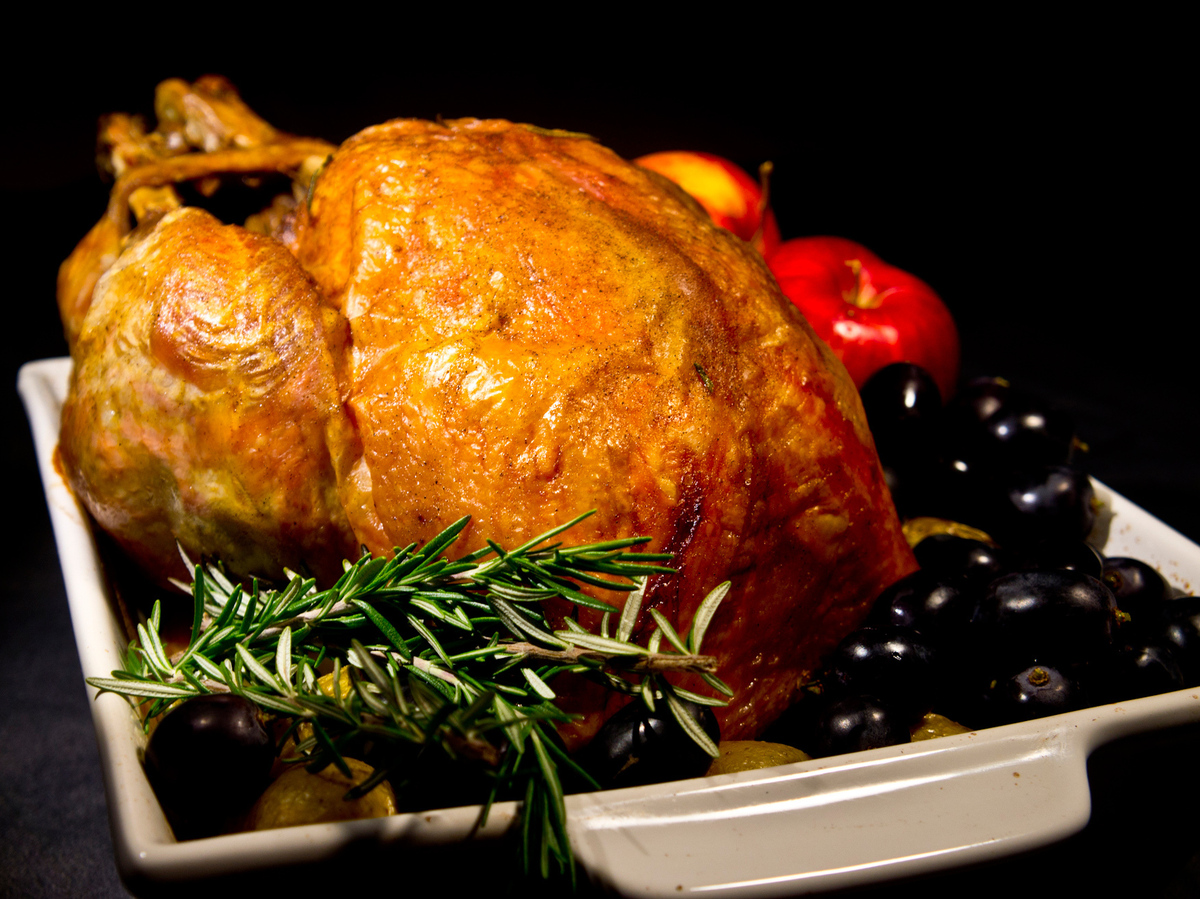 Jack Bishop recommends letting your turkey sit for at least 30 minutes before you start carving.

If there's one Thanksgiving mistake Jack Bishop sees more than any other, it's people rushing to carve their birds. Bishop is editorial director of the public TV series America's Test Kitchen. He tells Fresh Air's Terry Gross, "Turkey needs to rest before you carve it ... and a lot fewer juices will end up on the carving board."

Bishop and Bridget Lancaster, also of America's Test Kitchen, share their tips for buying, seasoning and cooking a turkey, and describe some of their favorite side dishes.

On buying, seasoning and carving your turkey

Lancaster: Don't buy too big of a bird — 12 to 14 pounds is kind of the limit. Any larger than that and you're going to have a really big problem cooking it evenly because ... the breast meat tends to cook a lot faster than the dark meat. And it's also a problem of mechanics: It's really hard to get a 20-pound turkey into some of the more modern ovens. ...

After that, it's really making sure you season the turkey. We like natural turkeys, ones that aren't pre-brined or injected, so you either want to brine it — soak the turkey in saltwater solution — or you can rub salt under the skin. And that really, along with time, helps to season the turkey well. You do want to let either the brine or the salt rub do its job. Salting takes a bit more time. ... Twenty-four hours is a good period of time to wait. ... It slowly seasons it. 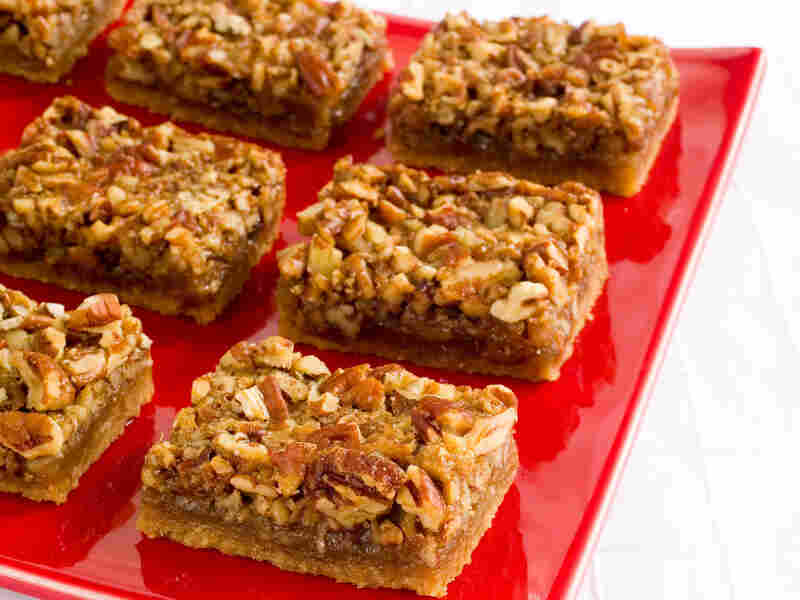 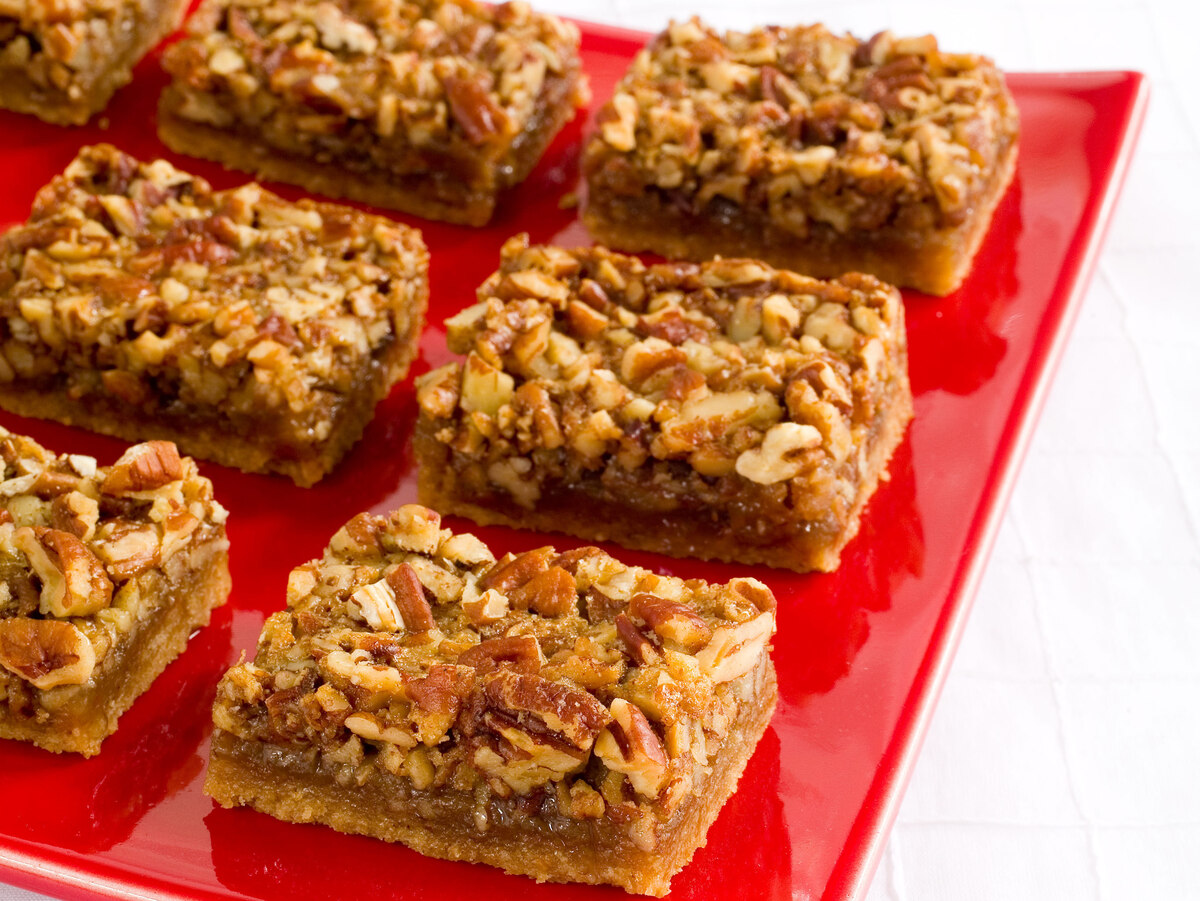 Try some of Bishop and Lancaster's Thanksgiving favorites:

Breast meat is great when it's salted because it tends to hang on [to] its moisture a bit more, so it gives you a window or an error cushion.

Bishop: There's a rush to carve. Turkey needs to rest before you carve it. If you're using a small bird like Bridget suggests ... it's maybe 30 minutes. If you've got a larger bird, maybe 40 minutes. And there [are] two things that you're doing: One is it's much simpler to carve a bird that's not scorching hot; the second thing is you're letting the muscle fibers relax so that they can hold onto more of those juices.

On getting crispy skin on your turkey

Lancaster: One way is we rub the skin with a mixture of salt and pepper and a little bit of baking powder. And the baking powder seems very odd, but it actually is starting to dry out the surface just a little bit, ... that and loosening the skin and getting some of the seasoning under the skin. You can finish it off at a pretty high temperature just to give it a nice final blast of heat that will give it really nice crisp skin.

On not stuffing your turkey

Bishop: Instead, put the stuffing in a dish — but then it becomes "dressing," if you want to be technical about it. The problem is, when you stuff the turkey, yes, the stuffing gets all of the wonderful flavors from the bird, but it makes it much more difficult to cook the bird. It cooks a lot more slowly and unevenly, and obviously if you've got vegetarians then they're not going to eat the stuffing. So I always do it in buttered baked dishes and cover it with foil for most of the cooking ... usually about 30 to 40 minutes until it's warm, and then take off the foil so the top can crisp up, and it's absolutely delicious. ...

If you want to stuff your bird, you should actually microwave the stuffing, and then you put hot stuffing inside the turkey. It's a bit of chore, frankly, but that's the best way, if you actually are going to cook a stuffed bird, is to begin with fairly hot stuffing. You want to get it to about 120 to 130 degrees, so you don't have quite that problem with ice cold stuffing slowing down the whole process.

If You Must Fry A Turkey, Listen To William Shatner First

Lancaster: You can't cook them like regular potatoes. They contain a lot more water ... so if you boil them in lots of liquid you end up with sweet potatoes that have fallen apart, sweet potatoes that are very soggy. They don't have that fluffy texture.

So we actually braise sweet potatoes. You slice sweet potatoes very thin, about a quarter inch, and you put them in a saucepan, or you can double the recipe and put them in a Dutch oven. And just a few tablespoons of heavy cream, a couple pats of butter, and you cook it over low for a good 35 minutes or so until the potatoes are very, very tender. ... You simply mash them [and] season them with a little salt and pepper.

Bishop: A recipe I really like to make has some bold Spanish flavors in it. So it's the traditional mashed potatoes and, in the test kitchen, we think you should boil whole russet potatoes still with the skins on. And the reason that you're doing that is you don't want them to soak up more water than is necessary, because you want them later on to soak up a lot of delicious half-and-half. ... Cook 30 to 40 minutes, ... drain them, let them cool a little bit, and then you need to peel them. ...

Rather than just adding plain old butter and half-and-half, I like to add some smoked paprika and some toasted garlic that I've already cooked in the butter first; and stir those into the potatoes, then add a little more warm half-and-half. A lot of people add cold cream at the end, and then you end up with cold mashed potatoes. Warm that half-and-half, a little salt and pepper.

A great trick if you're the kind of person that doesn't want to be doing this right before dinner, is to then put it in the slow cooker on low, and you can let the mashed potatoes hang out for an hour or two in the slow cooker while you get everything else ready for dinner.

Russet potatoes make fluffier mashed potatoes, but Yukon golds have an appealing buttery flavor and can be used.

1. Place potatoes in large saucepan and cover with 1 inch cold water. Bring to boil over high heat, reduce heat to medium-low, and simmer until potatoes are just tender (paring knife can be slipped in and out of potatoes with little resistance), 20 to 30 minutes. Drain.

3. Stir in butter until incorporated. Gently whisk in half-and-half, add salt, and season with pepper to taste. Serve.

The extra steps in this variation are worth the trouble.

Why this recipe works: Pecan bars often suffer the same problems as their pie counterpart. To avoid an overly sweet filling, we added a hefty amount of vanilla as well as a hit of bourbon (rum works, too) and plenty of salt. For a shortbread-like crust, the food processor not only made the mixing easy but also ensured we didn't overheat the butter. Adding nuts to the crust gave it appealing texture that was a good contrast to the filling. Partially baking the crust before adding the filling (as well as the requisite pecans) and returning the pan to the oven gave us a crust with the best texture and a deeper flavor.

You can substitute dark rum for the bourbon if desired.

1. For the crust: Adjust oven rack to middle position and heat oven to 350 degrees. Make foil sling by folding two long sheets of aluminum foil so that they are as wide as 8‑inch square baking pan. Lay sheets of foil in pan perpendicular to one another, with extra foil hanging over edges of pan. Push foil into corners and up sides of pan, smoothing foil flush to pan. Grease foil and set aside.

2. Process flour, sugar, pecans, salt, and baking powder together in food processor until combined, about five pulses. Sprinkle butter over top and pulse until mixture is pale yellow and resembles coarse cornmeal, about eight pulses.

3. Sprinkle mixture into prepared pan and press into even layer with bottom of measuring cup. Bake crust until fragrant and beginning to brown, 20 to 24 minutes.

4. For the filling: Meanwhile, whisk sugar, corn syrup, melted butter, bourbon, vanilla, and salt together in large bowl until sugar dissolves. Whisk in egg until combined.

5. Spread filling evenly over crust and sprinkle with pecans. Bake bars until top is brown and cracks start to form across surface, 25 to 30 minutes, rotating pan halfway through baking.