Accessibility links
Thanksgivukkah Stress Getting You Down? Here's A Literary Escape Plan For critic Maureen Corrigan, this year's hybrid family holiday may be best celebrated by escaping into a book. Her recommendations include a kids' book about Russian Jews who identify with the Pilgrims, and a novel that contemplates class divides during wartime through the lens of a football game. 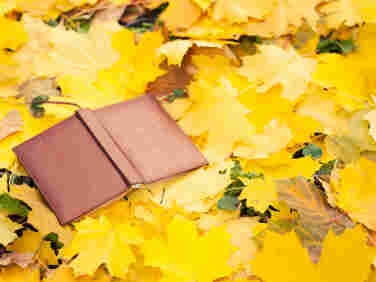 Mark your calendars: According to some scholars, the next time it might happen is the year 79,811. I'm talking, of course, about the hybrid holiday of Thanksgivukkah, a melding of Thanksgiving and the Jewish Festival of Lights. The Borsch Belt-style Pilgrim jokes and mishmash recipes (turkey brined in Manischewitz, anyone?) are flying around the Internet; but since Jews are frequently referred to as "the People of the Book" and Pilgrims pretty much lived by the Book, Thanksgivukkah seems to me like the quintessential (stressful) family holiday to celebrate by escaping into a book. A couple of these recommendations are holiday themed; some are not — but all will have you saying, "Thanks a latke!" for the all-year-round gift of reading.

There's one short book that's ideal for reading aloud at the Thanksgivukkah table. Technically, it's for kids, but its ability to hit readers right in the gut knows no age limit. Molly's Pilgrim is a 1983 story by Barbara Cohen about a young girl and her parents — Russian Jews — who immigrate to the U.S. early in the last century. As the only Jewish child in her rural school, Molly is, of course, bullied by the mean girls. When Thanksgiving approaches, the class is assigned a homework project of making Pilgrim dolls out of clothespins. That evening, Molly explains "Pilgrims" to her baffled, Yiddish-speaking mother: "Pilgrims," she says, "came to this country from the other side ... for religious freedom." Inspired, her mother takes over the project and creates a Pilgrim babushka fusion doll that teaches Molly's classmates about the inclusive message of Thanksgiving.

If you want to cut the schmaltz of sentimentality with some vinegar, the omnivore public intellectual James Wolcott is your man. Critical Mass is a four-decade collection of Wolcott's music, film and book reviews. Don't think "leftovers"; think "time capsules" of major cultural happenings that Wolcott was present to witness, chew over and, occasionally, spit out. Here's the opening of Wolcott's 1975 review of a performance at New York's CBGB by punk newcomer Patti Smith:

"Patti Smith moves through a room like a shark through the lower depths. Sharp features, oilblack hair, dark intense eyes. ... So her smile catches you by surprise, not only because it's switchblade quick, but because it's not the smile of a killer. So many reports on Patti Smith have made her sound demonic, wordcrazed — a cocaine Ophelia ... Her flakiness is legendary but her smile carries the weight of professional confidence."

The precision and prescience of that review also distinguish Wolcott's essays on Norman Mailer, Woody Allen and Ayn Rand. Critics like Wolcott — and there aren't many like him — are lights in the darkness.

The miracle of Hanukkah — candles burning for eight days — is a religious mystery that can only be "explained" by faith. The kind of mysteries that Scottish writer Morag Joss creates also defies rational explanation, although the origins of the crimes in her novels seem more sinister than sacred. Joss' just-published thriller is called Our Picnics In The Sun, and it tells the story of what happens when a stranger enters the lives of a defeated old hippie couple who run a dilapidated bed and breakfast deep in the English moors. In addition to her uncanny powers of storytelling, Joss can capture a world in the space of a few charged words. The bed and breakfast, we're told, resisted all home improvements: "It was a house that seemed always to be waiting for the next winter."

Joss' aged hippies live far off the beaten track, but once upon a time, all along America's highways, a restaurant chain called Howard Johnson's served up "Tendersweet" clam strips, 28 flavors of ice cream and "grilled frankforts" to a ravenous public on the move. A History of Howard Johnson's by Anthony Mitchell Sammarco is a chatty and charming look backward at a time when America took to the road and Howard Johnson's supplied the gastronomic fuel. Sammarco's book includes illustrations, recipes and a chapter devoted to the largest and most elegant Howard Johnson's of them all — the one built in Rego Park, Queens, for the 1939 New York World's Fair. Outfitted with crystal chandeliers, this was the Howard Johnson's where, many years later, my family would go on special Sundays for genuine roast turkey dinners.

I've tried to avoid mentioning football, but it's time to surrender. This Thanksgivukkah roundup ends with a nod to Ben Fountain's brilliant 2012 novel, Billy Lynn's Long Halftime Walk, which takes place almost entirely during the space of a rainy Thanksgiving Day Dallas Cowboys game. Fountain's main characters are a squad of soldiers who've survived an attack in Iraq and are being trotted around America on a goodwill tour to drum up support for the war. Sharp and mordantly witty about the class divide between those Americans who fight and those Americans who have the luxury of thanking others "for their service," Billy Lynn's Long Halftime Walk will give readers much to digest long after the last bit of challah stuffing has been swept away.

A good Gobble Tov to all readers, everywhere.