Accessibility links
At The BBC, The Beatles Shocked An Institution Between 1962 and 1965, The Beatles were featured on 53 BBC radio programs. For The Beatles: The BBC Archives, executive producer Kevin Howlett had to search for many of these recordings, and they weren't easy to find.

England got a lot more of The Beatles than Americans did during the group's formative years. Between 1962 and 1965, The Beatles were featured on 53 BBC radio programs, including their own series, Pop Go the Beatles. They performed originals and covers and chatted with BBC hosts.

The Beatles: On Air-Live at the BBC Volume 2 has just been released. Kevin Howlett produced both that and the newly remastered reissue of the first volume, which was originally released in 1994. For reasons he explains to Fresh Air host Terry Gross, Howlett had to search for many of these recordings, and they weren't easy to find.

Howlett has written a new companion book called The Beatles: The BBC Archives, which includes transcriptions of the band's BBC radio and TV interviews as well as fascinating internal memos about the Beatles and their music. 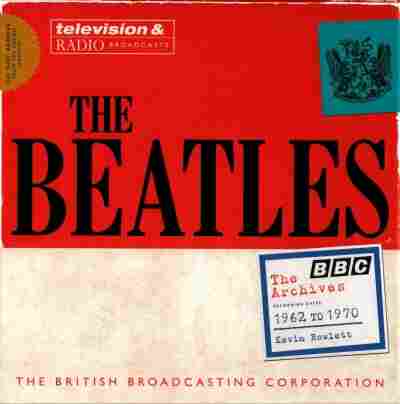 On the challenges of his project working in the BBC archive

My quest to restore the BBC archive [of the Beatles] goes way back to 1981 when I joined the national pop network in this country, BBC Radio 1, as a young rookie producer. I was 24 years old. The management knew I was a Beatles fanatic, I was a child in the '60s growing up with the Beatles, and they gave me this task. What a dream thing to be handed. They said, "Can you investigate what programs the Beatles performed music in and what songs they did?" And the BBC's written archives are a wonderful place where they kept every single piece of paper relating to the Beatles' performances, so when I wrote the book it was a magnificent source of material: memos, contracts, audience research reports — so that was fine, you could find out all of the information.

But then finding the music on the tapes? That was a completely different matter. Some of these recordings come from transcription discs, LPs that were distributed by the BBC to other countries for broadcast. Some come from producer listening copies. There were some producers at the time that thought maybe it is worth keeping this material, and in some of these cases, listeners who taped off the radio.

On The Beatles' audition for the BBC

The very first thing that Brian Epstein did when he took over the management of The Beatles was to fill out an application form for the variety department of the BBC. This, again, reminds us that there was no rock business as we know it. This was show business and they would be on with all sorts of other acts, radio ventriloquists even, that kind of thing.

So he fills out the application form. They're invited to do an audition and they turn up at the Manchester Playhouse and they perform four songs. The producer Peter Pilbeam selected them for broadcast. That was quite something because some other very popular Liverpool groups — they all failed their auditions with Peter Pilbeam, but he passed The Beatles and in the book, you can see Peter Pilbeam's comments [on the back of the application] and he says, "Not as rock-y as most, more country and western with a tendency to play music" — one of the great understatements, I think. He also makes a comment about the vocalists and he said, "John Lennon, yes. Paul McCartney, no." But Paul did sing on the first broadcast, so he must've changed his mind about that.

But, well done, Peter Pilbeam, because this is well before they were signed to Parlophone Records by George Martin and a long time before they released their first single, "Love Me Do," in the U.K. So the BBC was very quick to see the potential of this group.

The Beatles On NPR

Mono Or Stereo: Which Beatles Box Is Better?

On how The Beatles changed the tone of the BBC

I think it's important to put yourself back in that era, and this is the year [1963] before it all happens in America and internationally, this is the breakthrough year for The Beatles, make or break time. And what they were doing was revolutionary and shocking: the choice of material, the way they were allowed to be themselves on the air and be so witty and irreverent, all in a very good-natured way, but the culture clash of the cheeky lads from Liverpool with the trained actors who might be presenting programs with them.

So [the BBC's] light-years away from The Beatles, they're not music experts and they do these wonderfully corny links and you can hear The Beatles having such a great time and giggling away at some of these links. It was just radical to hear that on the BBC. In those days if you presented a program, you had to submit your script two weeks in advance and someone would go through it with a blue pencil altering your grammar. There was no spontaneity on the BBC. But because The Beatles were recording for the Popular Music Department, which was live music, they were allowed to be more natural in what was called "The Announcements." So they are themselves [and] that was quite shocking. BBC was a very formal institution.

On reading the audience research reports from the BBC shows

Going through the written archives, I loved looking through all of the audience research reports. There would be a listening panel and a TV panel, people selected to make comments on radio and TV programs broadcasted by the BBC. And they're all kept in the written archives and you read through these reports and there are some facsimiles of them in the file of documents that comes with the book. The one from a program called From Us To You broadcast on Easter Monday in 1964 and you read through and a security guard says, "The Beatles were vastly overrated, their performance was decidedly amateur and their entertainment value — nil." Somebody else says, "Noisy, boring, waste of time."

Read an excerpt of The Beatles