Accessibility links
Warp Your Kid's Mind With Some Great Sci-Fi This Holiday Season Do you have a neophyte nerd or a growing geek in your family? Writer and critic Jason Sheehan recommends some great science-ish fiction for kids of all ages, from The Little Prince to Logan's Run — books to spark a "love of the grand, the sideways and the strange." 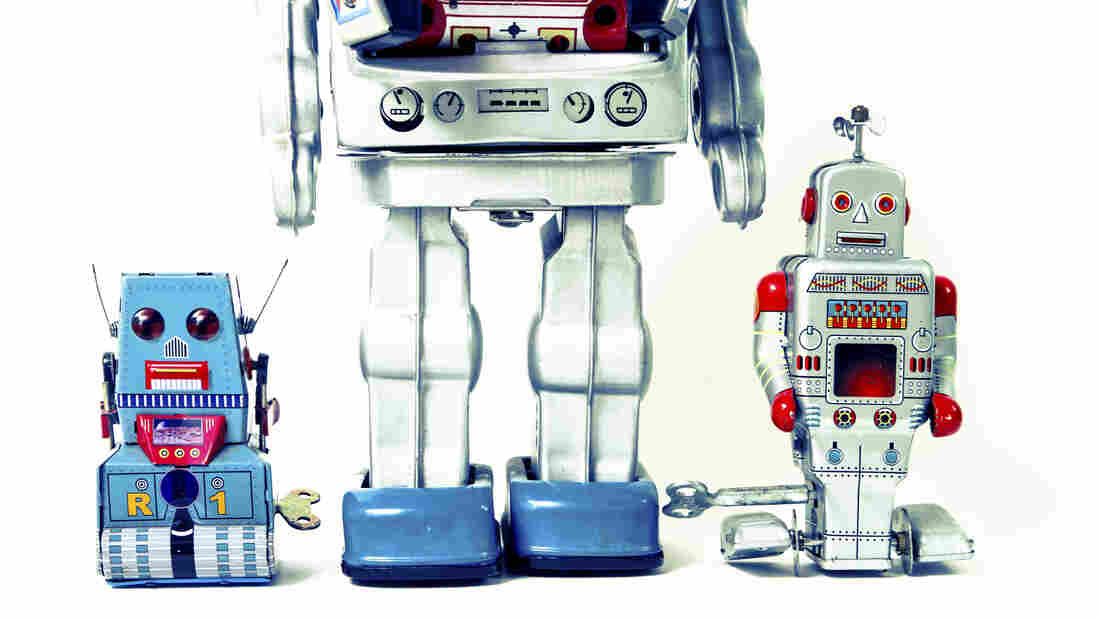 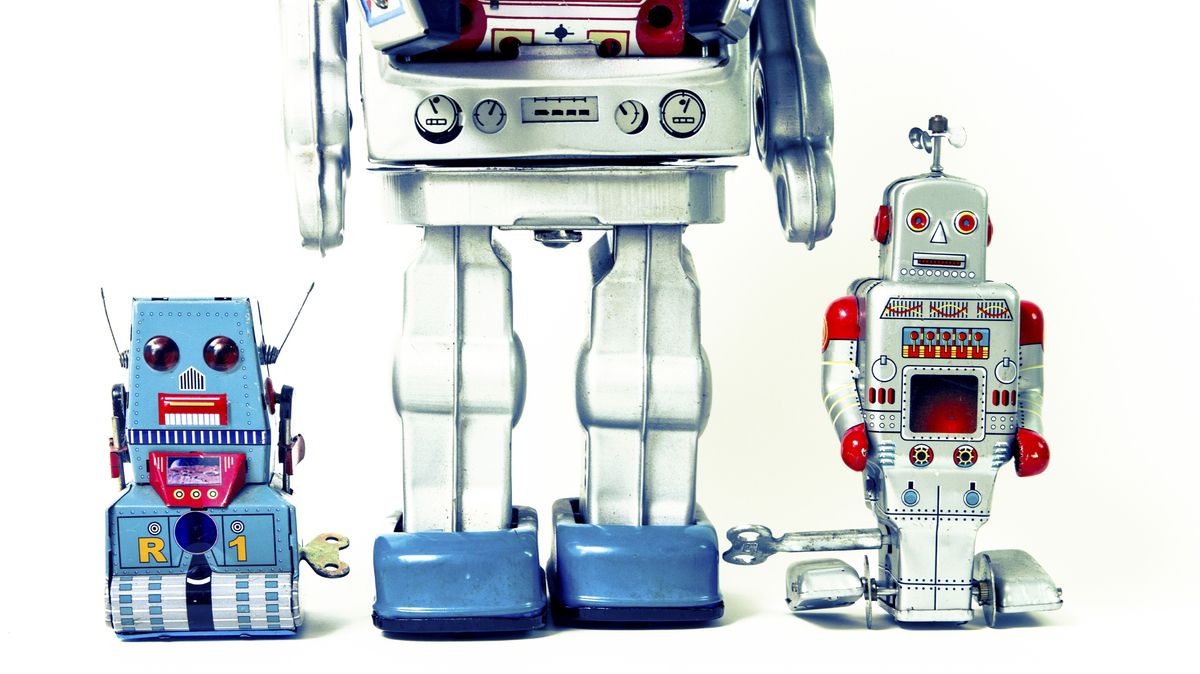 Want to warp your little robots? We've got some suggestions.

It worried me when my daughter didn't like Star Wars. Even though I told her there was a princess in it, she was wholly unimpressed and, from the start, a little bit creeped out by Darth Vader and all the stormtroopers. Granted, she was only 6 when I first tried to bring her into the fold of my obsession, but that was twice as old as I'd been when I'd first fallen hard for the original trilogy. It was ... disconcerting.

My son is easier. He likes anything with robots in it. Or giant monsters. Or spaceships. He has spent weeks now bothering friends and family about their possession of ladders, convinced that if he can borrow enough of them he can climb all the way to the moon.

But this is not enough for me. I believe with my whole heart in the inoculation of children against dullness and prosaic thought by early and repeated exposure to weirdness and brilliant imaginations. I believe in the transformative effects of science fiction on young brains, and so I've begun assembling a list of books made for blowing minds and sparking a love of the grand, the sideways and the strange. This is only my list. It is by no means complete, but it's a start. And as always, your mileage may vary.

Books To Be Read To (Or With) The Very Young

If You Decide to Go to the Moon by Faith McNulty and Steven Kellogg. Less science fiction than science fact, this children's book lays out everything necessary for a young boy going to the moon. There's advice on what to pack (including peanut butter and a spacesuit), a description of blastoff and, most importantly, instructions on how to get home again.

The Little Prince by Antoine de Saint-Exupery. This should be on everyone's bookshelf. It begins with drawings of boa constrictors and a plane crash in the desert, and then only gets odder as the pilot meets the Little Prince, who has fallen to Earth from a distant asteroid and begins to tell the story of his life in the confusing world of adults. There is something almost hallucinatory about the entire thing, from the first word to the last, and magic in almost every word.

Boy and Bot by Ame Dyckman and Dan Yaccarino. This one has everything that young nerds like: robots, adventures, a mad scientist and a happy ending. It's about a boy who finds a robot in the forest and what happens when it is accidentally switched off. Even now, it makes me want to have a robot as a best friend.

For The Young, Curious And Slightly Weird

Charlie and the Great Glass Elevator by Roald Dahl. Dahl? He was bonkers, man. Totally. (He was also a British spy and fighter ace, but that's a story for another day.) If all you know of him is Charlie and the Chocolate Factory, that's a good start, but the Glass Elevator is pure sci-fi — with spaceships, alien invasions, an orbital hotel full of Vermicious Knids and more. If your kid has a lid, this'll flip it.

The Cyberiad by Stanislaw Lem. I have two reasons for including this on my list. The first is that it's a beautiful, brilliant, funny and bizarre book of short stories, mostly revolving around the adventures of gifted robot engineers, Trurl and Klapaucius, who can make almost anything (for a price). It's perfect for young makers, or any child with a love for language and antic strangeness. And the second reason? Because Lem was a genius and everyone should be reading him all the time, so why not start young?

A Wrinkle in Time by Madeleine L'Engle. A science fiction book with a girl protagonist, two scientist parents, immortal weirdos, discussions of quantum physics and non-Euclidean geometry, and adventures that have never been matched in any kid's book? This one messed me up for years (particularly the billion-year-old Mrs. Which, Mrs. Who and Mrs. Whatsit), and I am so happy it did. If the young mind you are trying to warp happens to reside in a girl's head, buy 10 copies of this right now. For a boy, buy only eight.

'Too Young' For This

In addition to believing strongly in the tonic powers of great sci-fi, I am also foursquare in favor of introducing kids to books that they are way too young for. Mostly because the idea of being "too young for" any book is nonsense, and sometimes a book's greatest impact comes when the brain it's impacting is right on the edge of comprehension. So with that in mind:

A Canticle for Leibowitz by Walter M. Miller ought to be given immediately to any child who looks at any piece of the past (like a washboard, a VCR or a rotary phone) and wonders what it was used for. The story of monks who, in the wake of a devastating nuclear war, preserve a past that they do not understand and attempt to shepherd mankind through a second Dark Age (with mixed success), it is one of the masterpieces of post-apocalyptic sci-fi.

Logan's Run by William F. Nolan and George Clayton Johnson should be the 12th birthday present for every child in America who shows even the slightest yen toward conformity. In Logan's world, everyone is executed on the day of their 21st birthday. Those who run are chased down and killed. The madness of rote obedience, police states and xenophobia has rarely been better handled — and the fact that the whole story plays out like one long chase scene doesn't hurt either.

You should also check out your kid's school syllabus and make sure that he or she gets a well-loved copy of Ray Bradbury's story of rebellion and book-burning firemen, Fahrenheit 451, before the day it becomes homework. Trust me — when the time comes, they'll get the irony.

And finally, leaven all this seriousness and dystopia with a little Hitchhiker's Guide to the Galaxy, please. Arthur Dent truly knows where his towel is at, and he's one of literature's great Everyman heroes. The sooner your kids get to know him, the better off they'll be.

Jason Sheehan is an ex-chef, a former restaurant critic and the current food editor of Philadelphia magazine. But when no one is looking, he spends his time writing books about spaceships, aliens, giant robots and ray guns. A Private Little War is his newest book.