Accessibility links
Tech Leaders, Economists Split Over Clean Energy's Prospects Renewable energy has become a $220 billion a year industry. But to significantly slow climate change, the power of wind, solar and other renewable sources must vastly expand. Some say the tech breakthroughs needed are on the horizon, though a top economist sees a tougher road ahead. 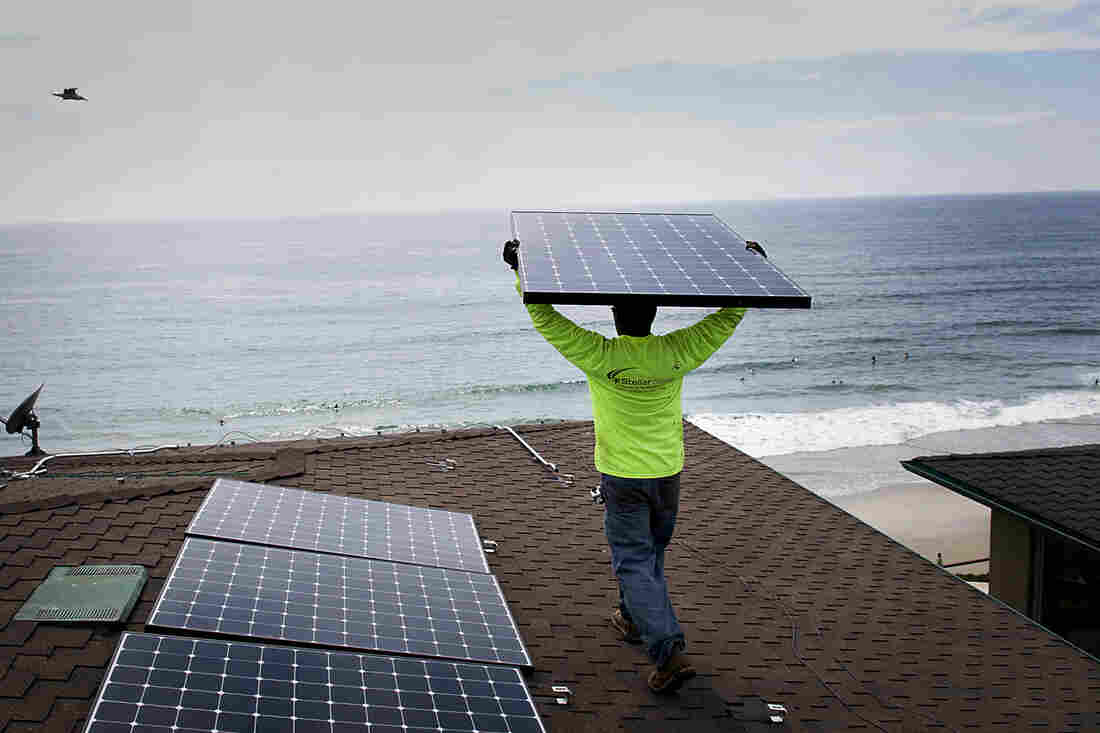 Andres Quiroz, an installer for Stellar Solar, carries a solar panel during installation at a home in Encinitas, Calif. Sam Hodgson/Bloomberg via Getty Images hide caption

There is a broad scientific consensus that to keep global warming in check, we need to phase out 80 percent of all oil, coal and natural gas by midcentury. President Obama has set a nonbinding target to do precisely that.

There are technologists who say this national goal is well within reach, but there are also economists who are quite pessimistic about those prospects. And you can find this range of opinion on the University of California, Berkeley campus.

"It's going to be very tough," says economist Catherine Wolfram, who co-directs the Energy Institute at Cal's business school.

Wolfram is skeptical — in part because every road map to clean energy assumes we will make huge improvements in how efficiently we use energy. Some efficiency advocates have been arguing for decades that this is an enormous opportunity to save energy and money at the same time. To hear them talk, it's as though there's cash lying on the sidewalk, just waiting to be picked up.

"Those opportunities have been around for a while and people aren't doing it, so there's a real question about why they aren't," Wolfram says. "And one of the fundamental questions that raises is whether there really are $20 bills lying on the sidewalk."

She has academic research to back up her skepticism, and she also looks to her own life as an example.

"We had a company come to our house and make a bunch of recommendations to make our house more energy efficient," Wolfram says. "And one of them involved blowing insulation into our walls, and drilling holes every 3 feet in our walls."

Once Wolfram realized how much it would cost — not just for the insulation, but to patch and repaint all her walls — she concluded that it wasn't worth it for the modest savings she'd see on her energy bills.

She's also leery of the cost of switching to renewable sources of energy such as wind or solar power. Prices will have to rise substantially, she says, if we make all the infrastructure changes that would be required to make these on-again, off-again energy sources the backbone of our nation's energy system.

"Given the technologies we have today and given the economics of the current technologies, it is a really hard problem," Wolfram says. "I hate to say it, but it may be an impossible problem. I think it's a problem that needs a technological breakthrough."

Nobody can predict a breakthrough, so when an economist crunches the numbers, things look pretty grim.

But the outlook doesn't seem as gloomy to her colleague, Daniel Kammen. He's a professor of energy and nuclear engineering, ensconced in a program that's dreaming of a low-carbon world.

"I'm writing a book right now called Energizing the Optimist, so I'd better be in the optimist category — and I think I am," Kammen says. "In fact, maybe I'm so much in the category that a couple of my students say their job is to rein in my optimism."

Kammen thinks advances in technology are on the horizon that could push the United States rapidly away from fossil fuels. If we put a price on the environmental damage caused by carbon dioxide, clean forms of energy like solar would become comparatively cheaper, he says. That would trigger a whole new relationship between people and energy, he says, as homeowners produce power instead of simply consuming it.

People would have a powerful reason to install solar panels and store some of that energy in the batteries in their electric cars — and even send short bursts of it to the power grid.

"There will be an opportunity to sell that power back to the utility, making money on the deal," Kammen says. "And people will think of their cars and their homes not as devices that simply suck up money in the form of energy, but generate it and put it back in the system and make money.

The grid would have to be reconfigured to handle all these scattered energy sources. But if there's money to be made, Kammen says, innovation will surely follow.

"So I don't think the 80 percent reduction goal by 2050 ... which sounds like a new industrial revolution, is going to be that hard," he says. "I would even say we could do it in a decade or two if we were properly motivated."

The real question in his mind, he says, is not whether the United States could achieve this, but whether this could happen in the rest of the world — which is in fact where most of the future carbon emissions will come from.

But if the United States can invent its way out of climate change, he says, he's optimistic we can also invent ways to spread that solution around the world.