Accessibility links
Crossing The Sea For Freedom A Familiar Story For Americans At least 30 Haitian migrants died this week when a packed sailboat capsized off the coast of the Bahamas. NPR's Scott Simon reminds us how some of the first Americans arrived on the continent, risking their lives to sail across rough seas. 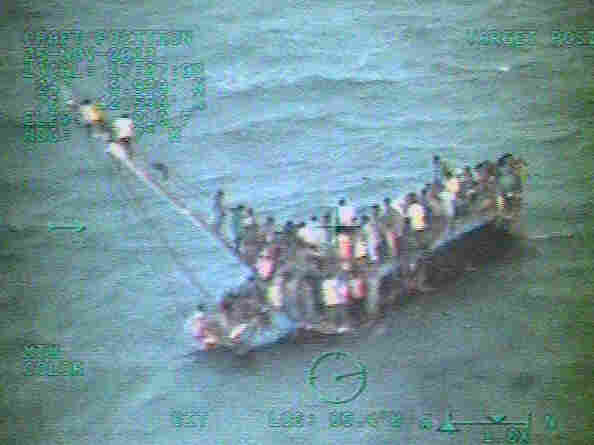 More than 100 Haitians were rescued this week after their crowded sailboat capsized. At least 30 more were reported dead. U.S. Coast Guard via Getty Images hide caption 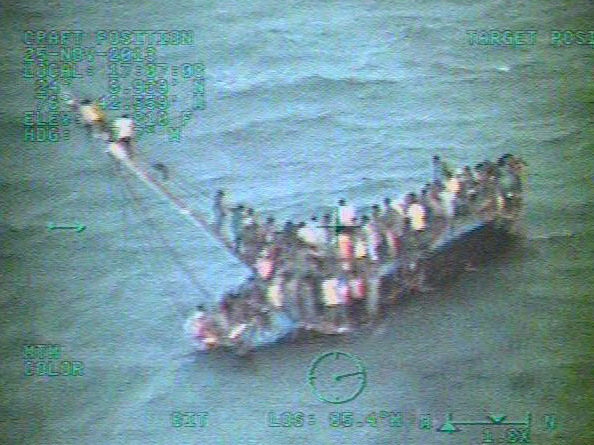 More than 100 Haitians were rescued this week after their crowded sailboat capsized. At least 30 more were reported dead.

This week, at least 30 people died when a packed sailboat ran aground and capsized off the coast of the Bahamas. The rest of the migrants on board clung to that splintered boat for hours until the U.S. Coast Guard found them. The survivors are being cared for at a Bahamian military base until they are sent back to the place they risked their lives to leave.

They were Haitians fleeing their island for America. By the time they were found, they'd been at sea for eight or nine days and had run out of food and water. Many were severely dehydrated.

Professional smugglers stuff people onto boats like so many sacks, with only the food and water they might be able to carry and no life jackets. That's according to U.S. Coast Guard Lt. Cmdr. Gabe Somma. "[They] are ruthless," the commander says. "They don't care about safety; they only care about making money."

The number of Haitians caught by the Coast Guard crossing the Mona Passage, between the Dominican Republic and Puerto Rico, has soared this year; more than 2,000 have died so far this year.

Coast Guard Chief Petty Officer Ryan Doss told the Miami Herald, "every year we see hundreds of migrants needlessly lose their lives at sea ... and those are just the ones officials are aware of." And, Somma adds, "we don't know how many people die out there on the open water."

Marleine Bastien, the director of Haitian Women of Miami, told the Sun Sentinel newspaper that increasingly harsh conditions in Haiti are causing more people to risk their lives to try to leave. Thousands of Haitians are still living in tents, nearly four years after a crushing earthquake. "The cholera outbreak continues to create havoc there," she says. "It's still active; it's still killing people."

But how many earthquakes and typhoons, not to mention typhoid and cholera outbreaks, have struck the world over the past four years? Haiti is no longer at the center of world attention, and thousands of Haitians choose to put their lives in the hands of criminals and dangerous waters to try to get in to the United States. The hope of America is still a beacon that pulls people to our shores.

Of course it's illegal to enter the United States this way and try to work and stay. But in this week in which we give thanks for freedom and plenty, we might want to remind ourselves that some of the first Americans became American by risking their lives to sail across rough seas.