Accessibility links
Book Review: Anjelica Huston, Author Of 'A Story Lately Told' The acrtess' new memoir might not be the kind of thing you'd expect from a longtime A-list actress and daughter of film royalty. Forget the glamour and debauchery of the familiar Hollywood tell-all. As reviewer Meg Wolitzer explains, Huston's story begins before Los Angeles, a story at once relatable and unique. 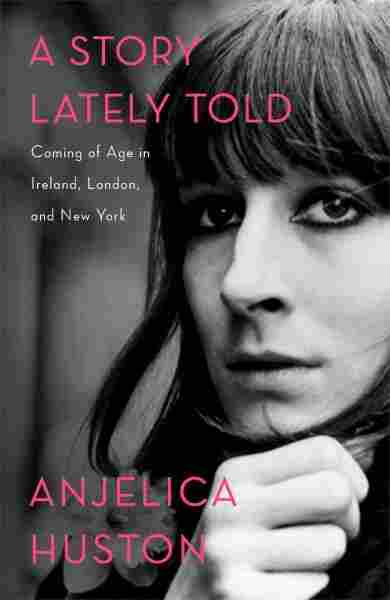 Coming of Age in Ireland, London, and New York

When I saw that the actress Anjelica Huston had written a memoir, I thought, "Oh, good, I'll read that." I assumed it would be filled with wild stories from '70s and '80s Hollywood and her relationship with Jack Nicholson. What it was like to win an Academy Award for Best Supporting Actress. General movie-star debauchery, carried out in the wedge shoes and oversized sunglasses of that era.

But I hadn't yet seen the subtitle of Huston's book, which is "Coming of Age in Ireland, London, and New York." The memoir ends with her arrival in L.A. (a second volume is set to come out next year), and I have to say I didn't miss any of the glitz. Huston's early life is ornate enough on its own. And though Jack Nicholson, who later became her partner, doesn't make an appearance here, that's fine. There wouldn't have been much room in this book for another big, charismatic figure. A Story Lately Told already has two of those: Anjelica and her father, legendary film director John Huston. He's such a major player both in the world and to his daughter that her book, in addition to being a coming-of-age story, is also a father-daughter story. While there are plenty of scenes that don't involve him, he's present even when he's absent — and he's absent a lot in her early life, off on location shooting movies like The African Queen, with Humphrey Bogart and Katharine Hepburn.

"Over the years," Huston writes, "I've heard my father described as a Lothario, a drinker, a gambler, a man's man, more interested in killing big game than in making movies. It is true that he was extravagant and opinionated. But Dad was complicated, self-educated for the most part, inquisitive, and well-read. Not only women but men of all ages fell in love with my father. ... They considered him a lion, a leader, the pirate they wished they had the audacity to be."

But the powerful father is matched by an equally powerful daughter. From an early age, Anjelica is sensitive, smart, irreverent, physically and intellectually unconventional. Her father gets it, and he treats her specially. "I could tell that Dad was proud, fascinated, but a bit baffled by me," Huston says. "He knew that I had an ability to channel my instincts. But on the other hand I was emotional and stubborn and not interested in following his advice."

Both father and daughter have met their match, though the drama in the story really doesn't take place in their interactions, but in their often unspoken powerful feelings for each other. John Huston, while married to Anjelica's mother, a very beautiful and elegant former ballerina, was constantly unfaithful to her. And Anjelica knew it. The father's affairs with an endless assortment of exotic beauties, and the mother's sorrow and frustration –– are felt deeply by their young daughter.

This, I guess, is one way a person becomes sophisticated: by watching the very adult complexities of her parent's marriage. And, along the way, being visited by an assortment of movie stars and fascinating, elegant people from around the world. Huston's privileged childhood is described with great texture. The enormous estate in Ireland where her family lived is a rambling, magical place. The names that are dropped in this book don't constitute name-dropping, but are simply the names that populated her childhood: "I met the poet W.H. Auden, who took tea in his carpet slippers in [the] kitchen."

Her world is so insular — and the people who come and go are mostly extensions of that world — that there isn't much awareness on her part that her circumstances aren't like almost anyone else's. Just as Eloise never seems to know that living in the Plaza is unusual to say the least, young Anjelica commenting on staying at "one of the grandest hotels in Dublin," or saying that "lunch was usually at ... another gracious Georgian hotel. ... Dublin bay prawns were my favorite" makes you marvel at her insularity. But you don't hate her for it. This is the way she was raised.

It's clearly important to Huston, as it is for all writers, to get the details right. But I was reminded of the effort of all this in her mention of her mother's "long, detailed, descriptive" letters to her father when he was away that were filled with "updates on horses, gardens, the locals, and us children." Huston writes, "Her letters are like affidavits, as if she had made an oath to report dutifully." The same can be said for a couple of faithful descriptions in this book of things we don't necessarily need to know about, like the names of the different governesses who took care of Anjelica and her brother Tony. That kind of accuracy can feel surprisingly slow in a book that's almost always so alive with sense memory.

If Huston's early life seems outsized and fairy-tale-like, the pain that shoots through it is the kind that anyone can know. Her mother, off on a trip to Italy with a lover of her own, is killed in a road accident in France. "I think of my mother all the time," Huston writes. "Diana Pickersgill's mother, Dorothy, died in a car crash, too. Diana described such a loss as an abduction, and so it is." When John Huston comes in from Rome for the funeral of his wife, Anjelica and her brother meet him at the train. "Other than the initial greeting on the station platform, I don't recall a single embrace or any word of consolation. But then he might have known that I blamed him for abandoning her."

When Anjelica as a very young woman gets involved with much older men, anyone with a smug and limited understanding of psychology might think they understand what draws her to them. And of course the complex and not-quite-gettable older man figures largely in her inner life, though she is a smart and subtle enough writer not to aim for a pop diagnosis, but instead, once again, to go for something truer, deeper and richer than that. Again and again in this stirring memoir of a highly unusual life, Anjelica Huston just tries to show what it's been like, being her.

Read an excerpt of A Story Lately Told