Accessibility links
Deadly Derailment Is Latest Accident For N.Y. Commuter Train Line At least four people are dead after a Metro-North Railroad train derailed in New York on Sunday morning. This past summer, a freight train carrying trash derailed on the other side of the curve. And in May, two Metro-North trains collided in Connecticut, injuring more than 70 people. 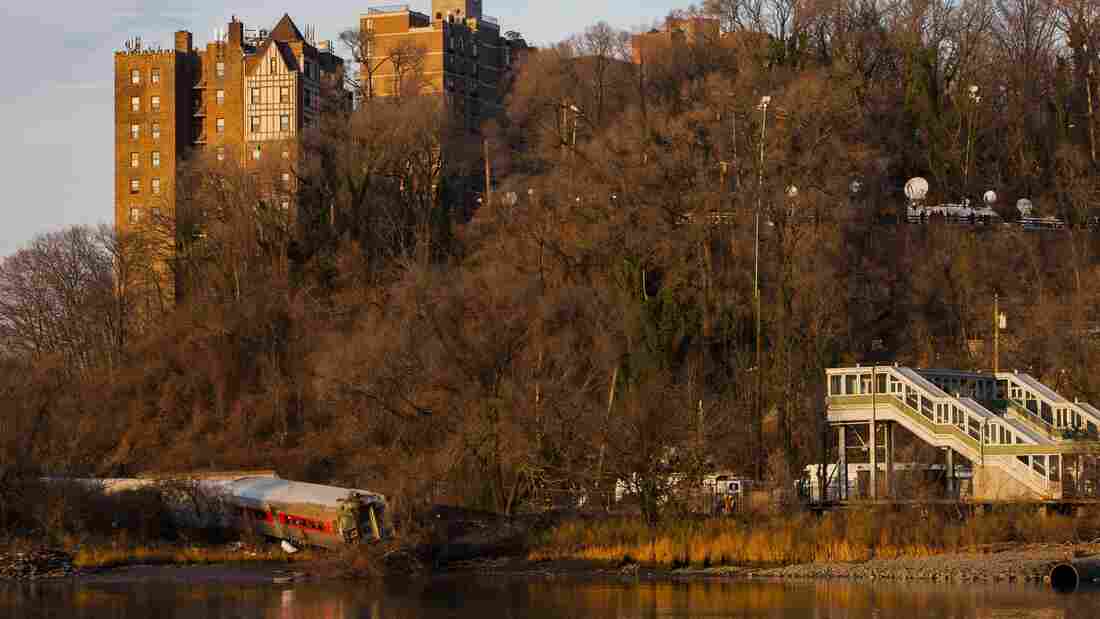 The wreckage of a Metro-North commuter train, which derailed Sunday just north of the Spuyten Duyvil station in Bronx, N.Y., lies on its side. The train was heading to Grand Central Terminal along the Hudson River. Christopher Gregory/Getty Images hide caption

A commuter train crash that left four people dead and dozens injured Sunday in the Bronx is the most serious among a number of incidents in the past year for Metro-North Railroad.

As the investigation into what caused the derailment continued Monday, thousands of commuters were looking for alternate ways in and out of New York City.

The commuter train was making the roughly 80-mile journey from Poughkeepsie south to Grand Central Terminal. Much of the route hugs the Hudson River, and when trains reach the Bronx, they take a sharp turn at the spot where the Harlem and Hudson rivers meet.

It was there, just outside the Spuyten Duyvil station, at roughly 7:20 Sunday morning, that the seven-car train hit the curve and went off the rails.

"By the time I looked up it was completely going off its track, and there was just like the rubble from under the tracks flying at my face," said an unidentified female passenger, who told WABC-TV that she was lucky to be in a car where no one was hurt.

At the crash site, the severity of the derailment was clear, and neighbors and onlookers gathered at an overlook near the crash.

Geraldine Hayes, who lives nearby, said Sunday's disaster reminds her of another incident this year.

"It's really sad, and we had a derailment on the other side of the curve about three months ago with the garbage. So I think it's important to find out what happened," she said.

This past summer, a freight train carrying trash derailed, causing significant damage to the track. At a Sunday news conference, Earl Weener of the National Transportation Safety Board was asked whether the freight derailment contributed to the latest accident.

"The answer is, we'll be looking at that, but at this point in time we have no indication that it's a factor," he said.

Weener said a crane will soon lift the train cars to stop a fuel spill and to make sure there aren't more bodies beneath the wreckage.

There were also questions about that sharp curve. Could that have played a role? At the scene, New York Gov. Andrew Cuomo tried to quell that speculation.

"The curve has been here for many, many years, right, and trains take the curve 365 days a year. So it's not the fact that there's a curve here," he said.

This is the first time passengers have died in an accident in Metro-North's more than 30-year history. But Sunday's derailment adds to one of the train line's worst years for safety. In May, two Metro-North trains collided in Connecticut, injuring more than 70 people.

"We are investigating several accidents that have occurred on Metro-North's property over the last eight months. So, we will be looking at precursor events ... maybe close calls prior to this that could have given Metro-North some indication that this was an area they needed to pay attention to," she said.

The NTSB says it plans to remain on the site for the next seven to 10 days, and investigators will spend that time inspecting the train, tracks and maintenance records. The NTSB says it already has data from the train's black boxes.