Accessibility links
Designer B Michael On Bringing Color To The Runway B Michael is one of few top-tier African-American fashion designers. His work has been described as "politely sexy" and is worn by some of Hollywood's top names. Host Michel Martin talks with the veteran designer about his inspirations. 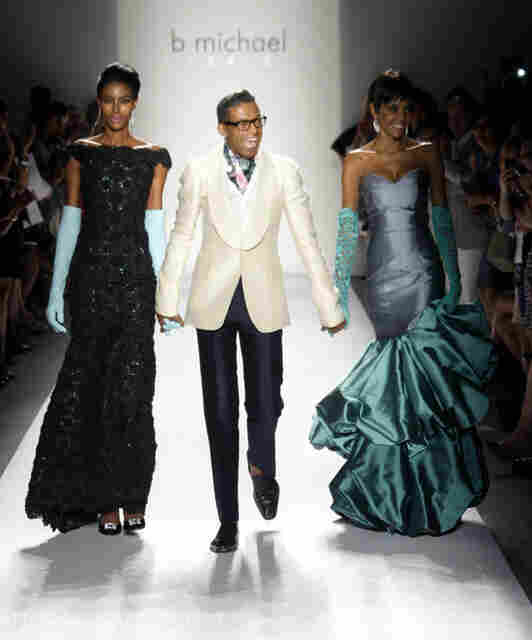 Courtesy of b micheal America

After a brief career on Wall Street, veteran designer B Michael followed his calling to the world of fashion. He got his start as a millinery designer for the '80s soap opera Dynasty. Soon after, he began designing couture gowns leading him to work with an extensive client list that includes Cicely Tyson, Angela Basset, Lena Horne, Whitney Houston, and Cate Blanchett — to name a few.

After spending decades in the business B Michael says, "Every successful story will tell you they've had to reinvent themselves."

He sat down with NPR's Michel Martin to share the wisdom he's gathered over the years and what it takes to break into the fashion industry as a person of color.

On the Lack of Mentors for Black Designers

We are the first generation in many instances—as we are in many industries that we're going into. We don't have Dutch uncles who open the door for us, and sit us down, and say this is what needs to happen, or this is the direction you should go in...I think it's about mentoring, it's certainly not talking about are you talented because that's subjective. It's about understanding the business of fashion and understanding you need to have the right team, and you need to be financially secure, and really understanding the relationships you have to have with retailers. Those are the lessons we really need to learn particularly as designers where we are creating our own generation in the business.

On the Controversy Surrounding Barney's Department Store in New York

I think a better question to Barneys would be how many manufactures or designers of color do you feature in your store? What equity are we getting out the fashion industry as a consumer?.. I would rather have that conversation and not be distracted by the ignorance of a security guard or a person working behind a counter. If we empower the manufactures and we own a store then perhaps you'll have a different experience because then that's a different playing field. If you have more black designers who are successful you'll have more black models on the runway.

On Ready to Wear Line

It really is about inclusion. So being in a Macy's or launching a ready to wear collection gives me the opportunity now to take my point-of-view and reach a broader audience. And reach young women and young men who may be just starting their game as well