Accessibility links
For Miami, A New Art Project, Complete With Drama The Perez Art Museum Miami opens this week, and despite praise for the building's design, the museum faces controversy over its name and has an uphill battle in a city where the art scene is already defined by private collectors. 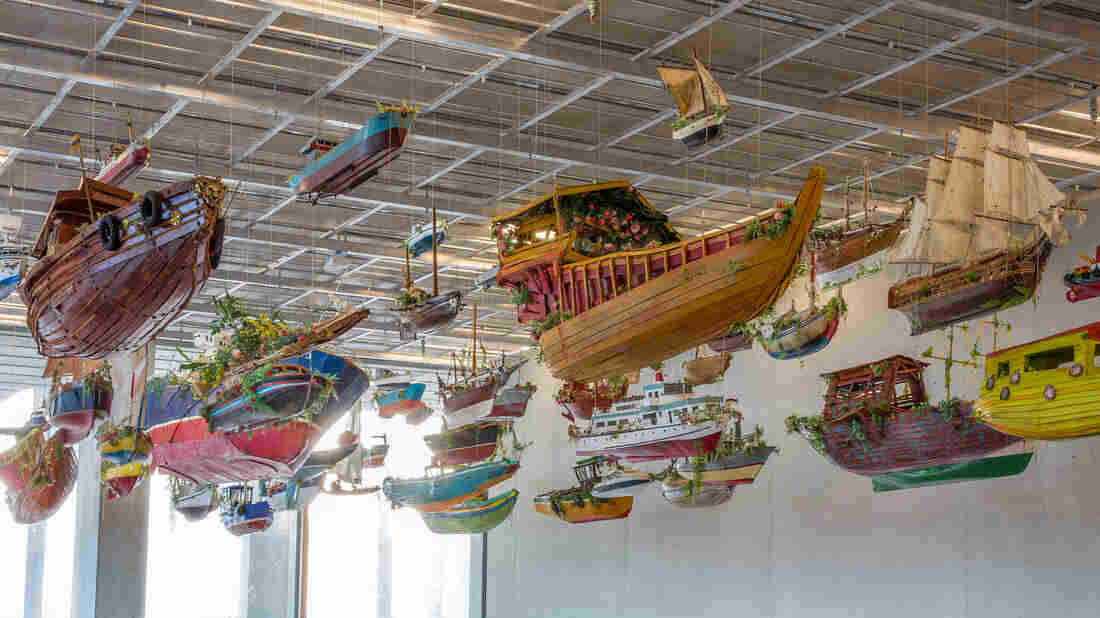 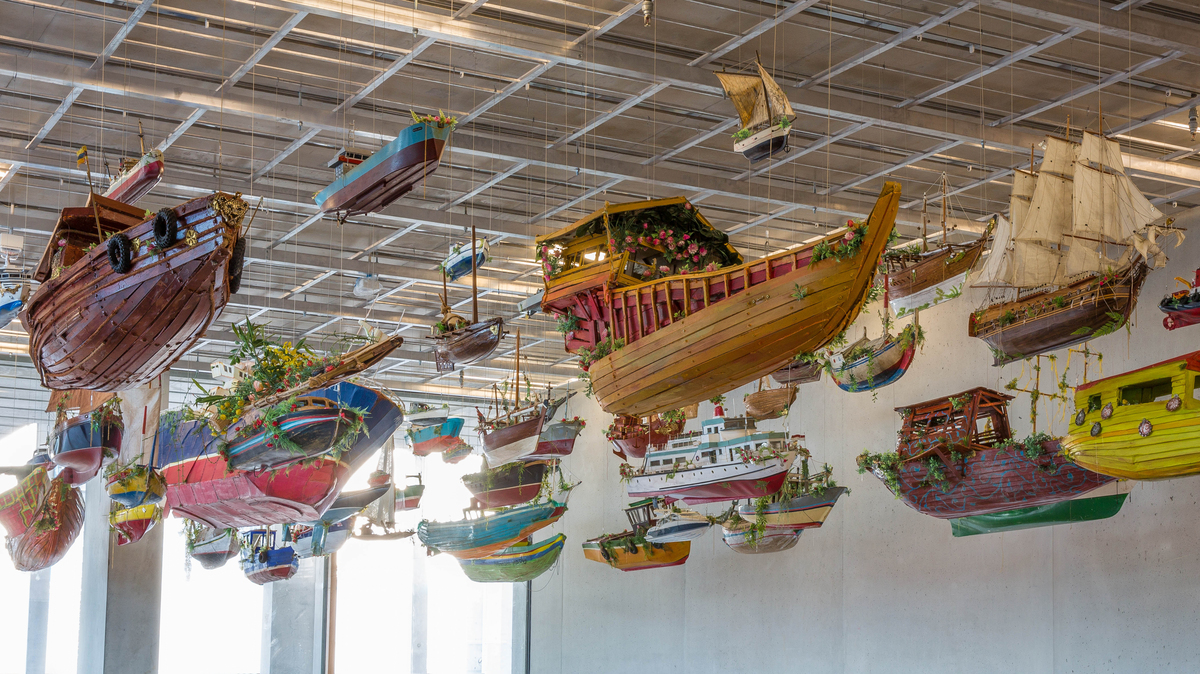 The boats of For Those in Peril on the Sea, by artist Hew Locke, hang in the entrance hall of the Perez Art Museum Miami, which opens this week.

Outside the glittering new Perez Art Museum Miami, finishing touches were still being applied late last month to the spacious plazas and gardens surrounding the $220 million building. Next door to the art museum, a new science museum is also going up. When it's all complete, the 29-acre Museum Park will provide a focus and a gathering spot on Biscayne Bay for those who live in, work in and visit downtown Miami.

The Perez building, designed by the Pritzker Prize-winning Swiss architects Herzog & de Meuron, has been described, and often, as stunning. It's notable for its spare, rectangular lines and expanse of glass windows — the largest hurricane-impact-resistant glass windows in the world — and for the 70 hydroponic gardens hanging from every side. They were designed by French landscape artist Patrick Blanc, and they're self-watering. 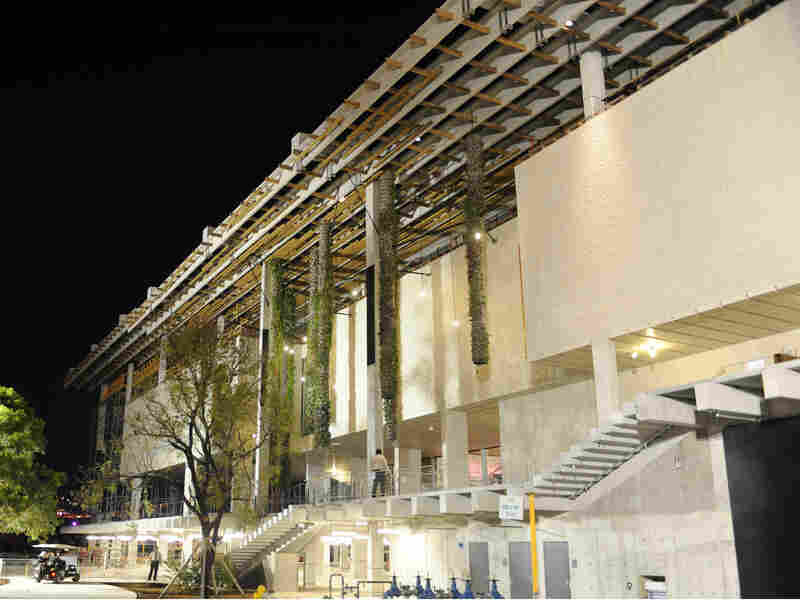 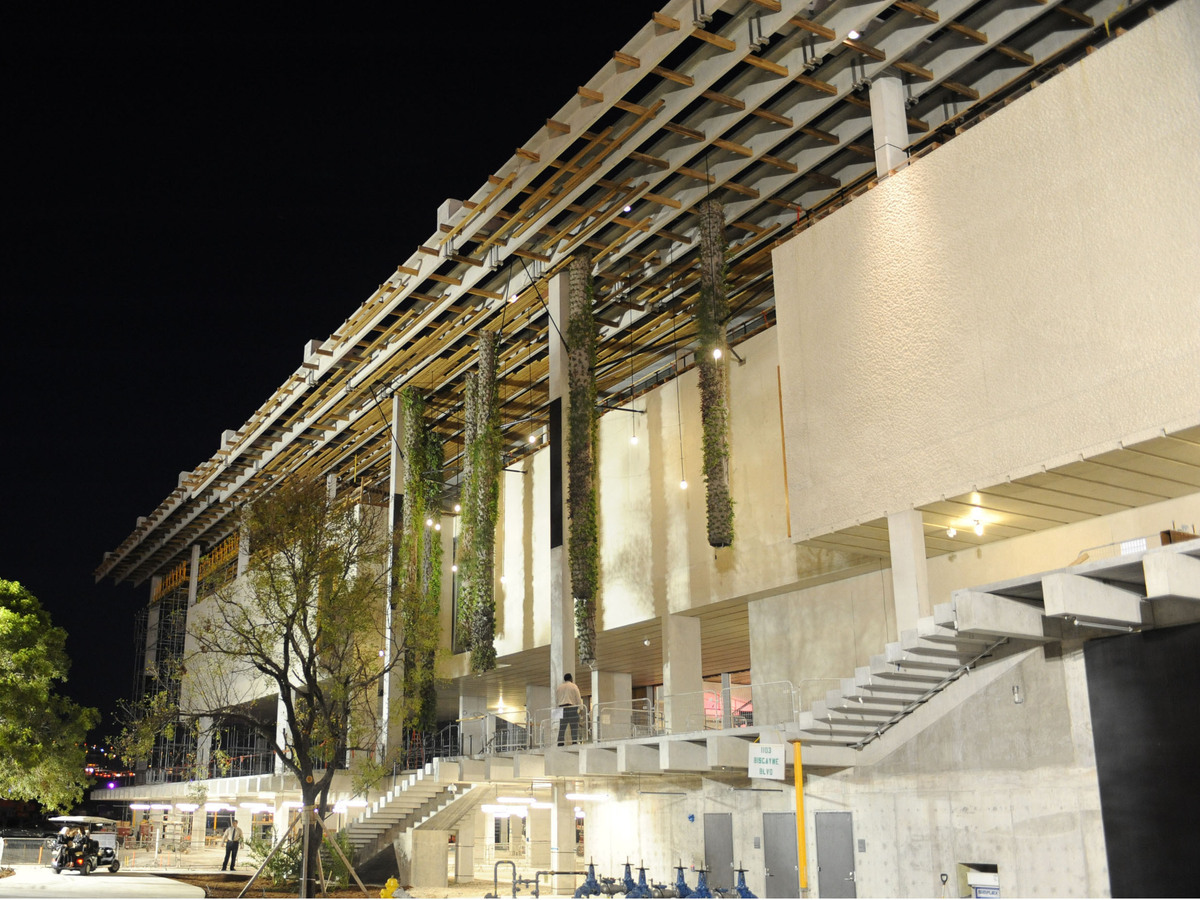 The distinctive museum building, designed by Swiss architects Herzog & de Meuron, has already been hailed as a success for the city.

"Each one of them ... has a recirculating pump," says museum director Thom Collins. "So six to eight times a day it sends water to the top, and the water then drips down through the entire plant network."

Stepping inside the museum, one of the first things you notice are the views on all sides of the galleries — the downtown skyline, Key Biscayne and the turquoise bay. It's an unusual setup for an exhibition space, with all those windows.

'A Cultural And Social Hub' In The Offing

Not that Miami hasn't already become an international arts destination. For more than a decade, the Art Basel Miami Beach conclave has attracted exhibitors and collectors from around the world.

But for nearly 30 years, the city's old art museum was a little-visited space across the street from the county government center. It was a home for traveling exhibitions that only recently began building a permanent collection.

Collins notes that the new museum's primary mission is educational — it plans to do outreach and hold classes for children and adults. But for those who live and visit here, the Perez has another mission.

"In a city like Miami, a museum can be a kind of cultural and social hub, quite apart from its function as an exhibition space and an educational space," he says.

Perez Art Museum Miami hopes to attract out-of-town visitors and locals alike with its traveling shows and its small but fast-growing permanent collection. Overhead in the entrance hall, for example, 60 small, handmade boats hang suspended from the ceiling — a flotilla Collins expects will resonate with many in Miami.

"[Artist] Hew Locke titled the piece For Those in Peril on the Sea," Collins says, "and of course there are multiple allusions in that title. But certainly one of them is to the migration suggested by these various vessels."

Another big exhibit, spread over several rooms, is a retrospective of Chinese artist and political dissident Ai Weiwei. Although he's currently not allowed to leave China, Collins says the artist created a special piece for the Miami exhibition — a labyrinth made out of stainless steel bicycle parts.

"One has to move through [it] to move into the second floor of the exhibition spaces," Collins says. "So it remains translucent; one can still see through the piece out to the bay." 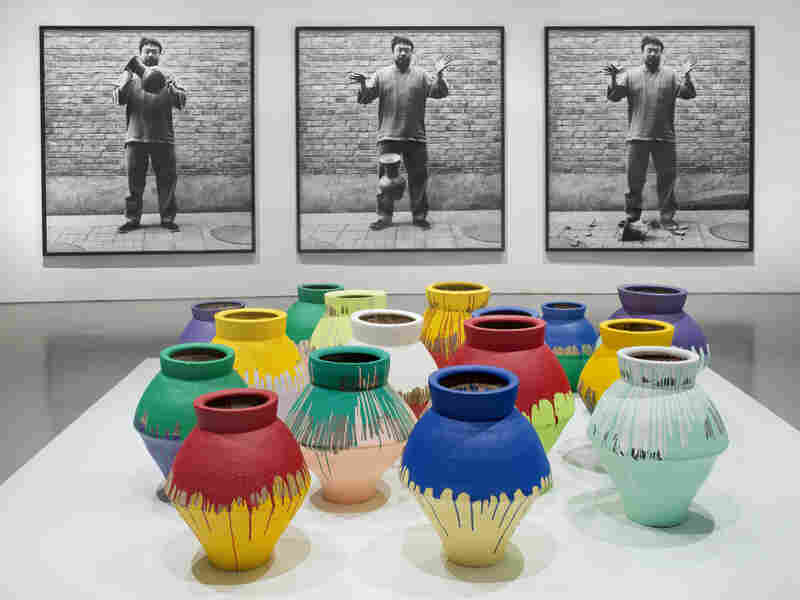 A retrospective exhibit featuring the work of Chinese artist Ai Weiwei is first up at the PAMM, including his installation According to What? shown at the Hirshorn Museum and Sculpture Garden in Washington, D.C., in 2012. Cathy Carver/Perez Art Museum Miami hide caption 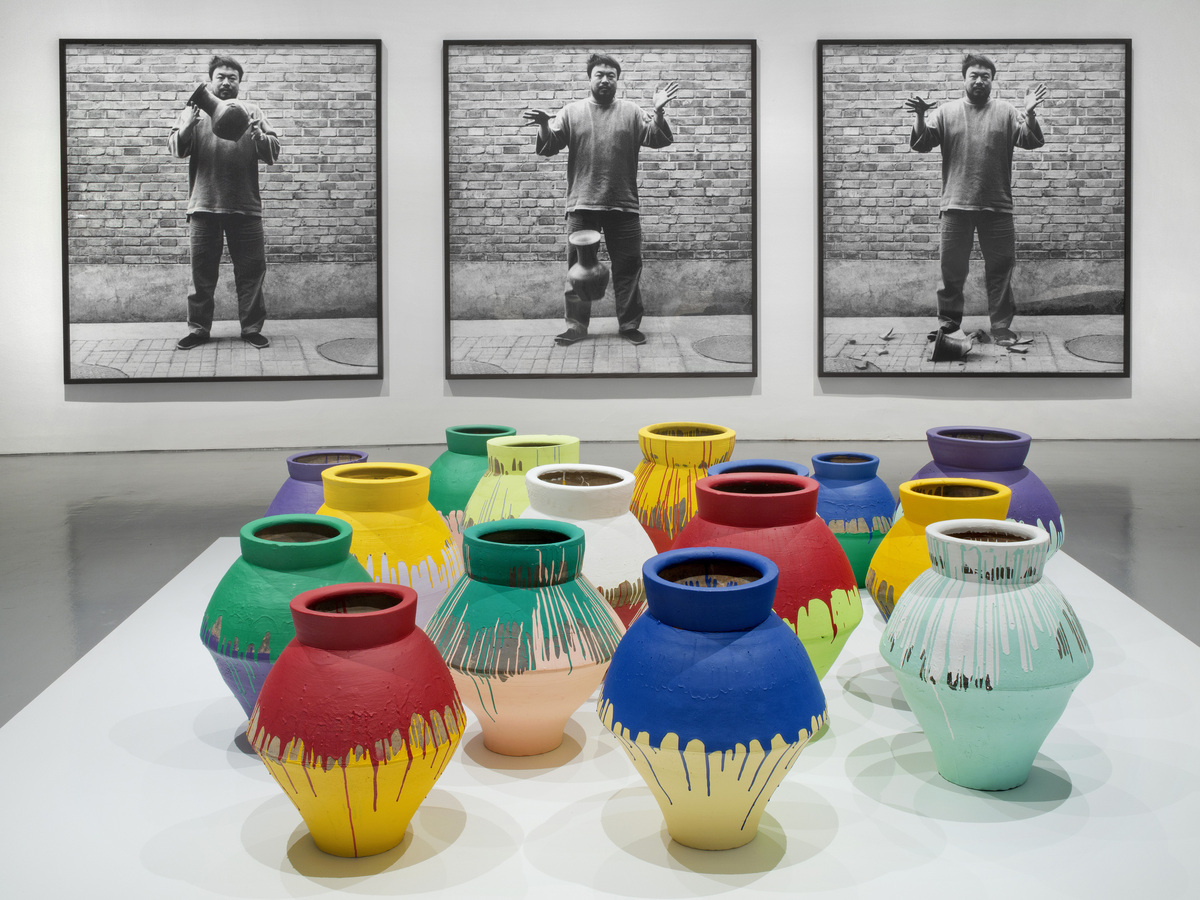 A retrospective exhibit featuring the work of Chinese artist Ai Weiwei is first up at the PAMM, including his installation According to What? shown at the Hirshorn Museum and Sculpture Garden in Washington, D.C., in 2012.

Friction Over Money, And Over A Name

The opening of a beautiful new art museum in the heart of Miami is a significant achievement, but one that's not without controversy. This is a city that has spent a lot of money on big projects in recent years, often to the displeasure of taxpayers. That caused some friction for the museum.

Even more controversial was the decision to name the museum after developer Jorge Perez. He had contributed $35 million in cash and art to the project, but four board members resigned in protest.

Perez says he doesn't understand why, arguing that his contribution exceeded those made by others in Miami who have had institutions named after them.

"I think maybe the name Perez doesn't sound as familiar with all these other names," he suggests. "You have to remember this is the first Hispanic name in a major institution in this country."

Naming the museum after Perez also didn't sit well with some of Miami's private collectors, several of whom have opened their own exhibition spaces to the public. Many of them want nothing to do with the new center. Improving those relationships, says critic and columnist Tyler Green, may be the institution's biggest challenge.

"The museum does not have a major collection," Green emphasizes. "And museums build collections by building circles of collectors that eventually donate work and support their acquisition."

That's a challenge that may take years to accomplish. In the meantime, Perez Art Museum Miami will be working on that other mission — luring visitors and residents away from the beaches and clubs and into its shiny new home.