Accessibility links
Washington State Growers Roll The Dice On New Pot Licenses The deadline to apply to legally grow and sell pot is coming up in Washington, but growers are finding there are pros and cons to going legit. Applicants must invest big money to qualify for a license, and it's unclear what the new system will mean for existing medical growers. 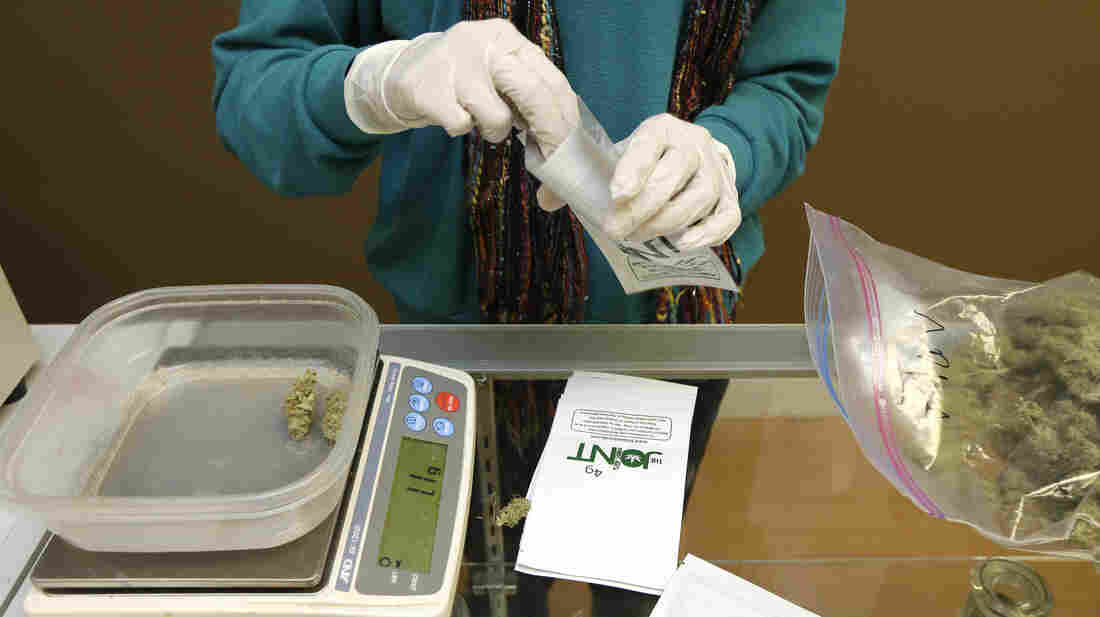 Washington is the second state to adopt rules for the recreational sale of marijuana. Some entrepreneurs see state-licensed pot as a golden ticket, but other growers aren't sure applying for a license makes good business sense. Ted S. Warren/AP hide caption 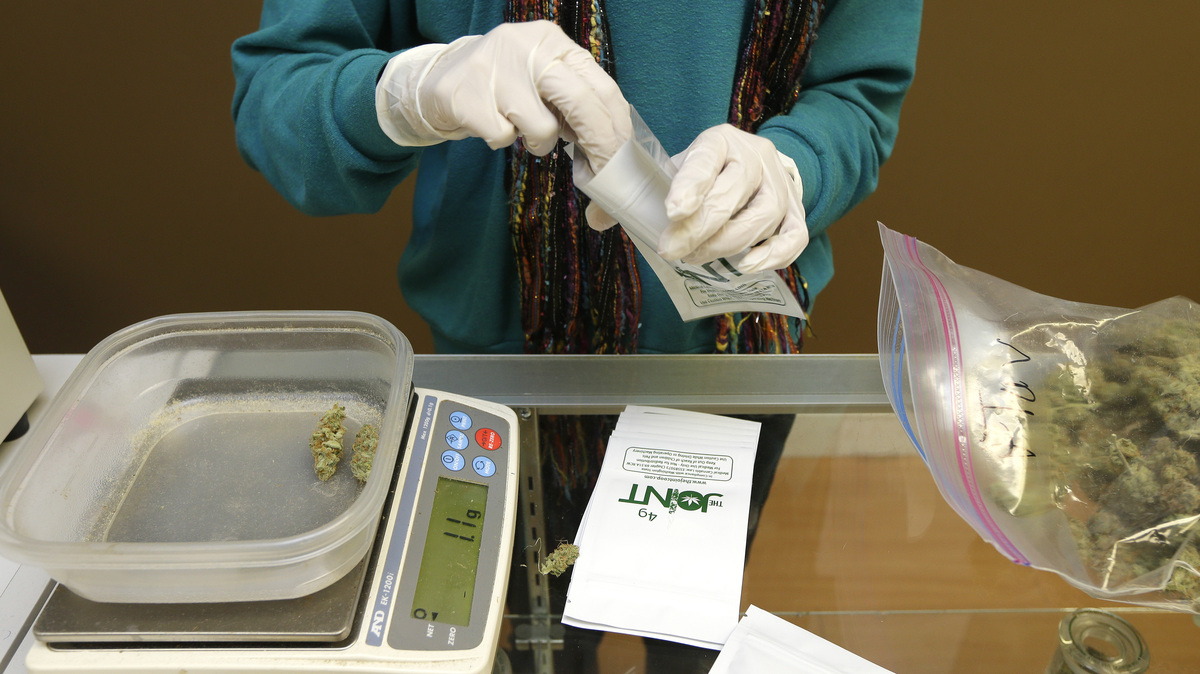 Washington is the second state to adopt rules for the recreational sale of marijuana. Some entrepreneurs see state-licensed pot as a golden ticket, but other growers aren't sure applying for a license makes good business sense.

Washington residents thinking about jumping into the state's new legal marijuana industry need to act soon. The deadline to apply for a state license to sell recreational pot is Dec. 19, and the applications are flooding in.

Danielle Rosellison, a loan officer in Bellingham, Wash., applied for her pot-growing license on the first day. "It's so cool," she says, laughing. "We have butterflies in our stomach all the time. I feel like they're all shot up on adrenaline."

To Rosellison and her husband, a stay-at-home dad, legal marijuana is an opportunity to change their lives.

Rosellison, her husband and a partner have already formed a company they call Trail Blazin Productions. They've been working for months, lining up a loan, an investor and a commercial space that meets the state requirements.

Even Where It's Legal, Pot Producers Weigh The Business Risks

They're not complete beginners; medical marijuana has been legal in Washington for more than a decade, and Rosellison and her husband have grown pot for the medical market. But that was just a sideline for the couple, who grew around 10 plants at a time. Now they're talking about 1,700 plants — if they get the license.

"You don't get your license until it's done, until you have your final inspection," she says. "That is a huge cart-before-the-horse, where you're investing hundreds of thousands of dollars in equipment and transformers and leases and everything else, and technically you don't know if you're going to get a license or not."

Still, Rosellison thinks the potential payoff is worth the gamble.

'Just Too Much Risk'

Jeremy Kelsey, who owns a medical marijuana store in the town of Mukilteo, disagrees. "I've just concluded that it's just too much risk," he says, sitting in a back room surrounded by big jars of curing buds.

Kelsey's store is across the road from where Boeing builds its 747 airplanes. Outlets like his aren't closely regulated in Washington state, and they occupy a legal gray area. Officially, medical marijuana "collectives" are allowed to produce limited amounts of pot for specific patients, who have medical marijuana cards. But those cards have become very easy to get — the issuers don't need to be medical doctors — and medical marijuana has become a de facto source for the recreational market.

Kelsey predicts the state-licensed pot sellers will do less business than they think.

"I think it's going to be more of a novelty, you know, at first," he says. "People are going to go, just because it's like opening up a Krispy Kreme in a market that never had one. Everyone wants to go try one. But then they're going to go, 'You know what? I'm just going to go back to my neighborhood guy because it really was just the same, and it was half the price.' "

Supporters of state-licensed pot share the concern that customers will turn to medical growers rather than state-licensed stores. There's talk of legislation next year to level the playing field — to make the medical industry pay the same taxes and follow the same tight quality-control rules that apply to the new state-licensed businesses.

"You cannot sell it for profit," says Hurst, who heads the Government Accountability and Oversight Committee. "It was never allowed, under law."

For the past few years, authorities have basically turned a blind eye to the illegality of for-profit medical marijuana sales in Washington, but Hurst says the rise of licensed pot businesses will lead to a crackdown on the medical producers.

"But it's going to be initiated by the license holders," he says. "The police can't ignore that kind of a complaint when it comes from someone who's paying taxes and it's interfering with their business."

Some of the state's biggest medical marijuana producers are probably thinking the same thing; they're applying for licenses, despite the burdensome regulations and taxes.

By refusing to join the state system, Kelsey, the Mukilteo vendor, actually stands out — and he readily admits his decision is a "roll of the dice." But that's always been the nature of the marijuana business.