Accessibility links
From 'Death Jars' To Wasps: A Quest To Stamp Out The Stink Bug From coast to coast, the invasive insect is costing U.S. farmers millions in crop damage, and it has become a smelly nuisance for homeowners. But researchers say they may have found some low-tech solutions to the stink-bug menace. 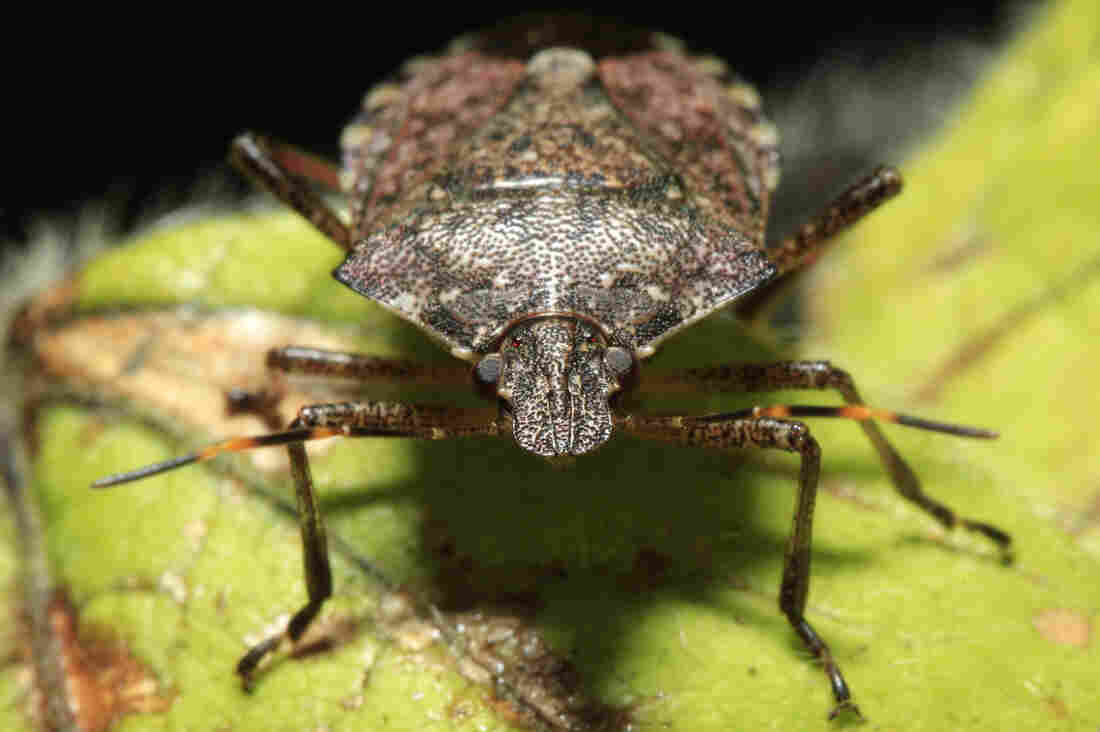 The invasive brown marmorated stink bug has become an expensive nuisance for U.S. farmers. It has spread to 40 states and eats about 100 different crops. Matt Rourke/AP hide caption 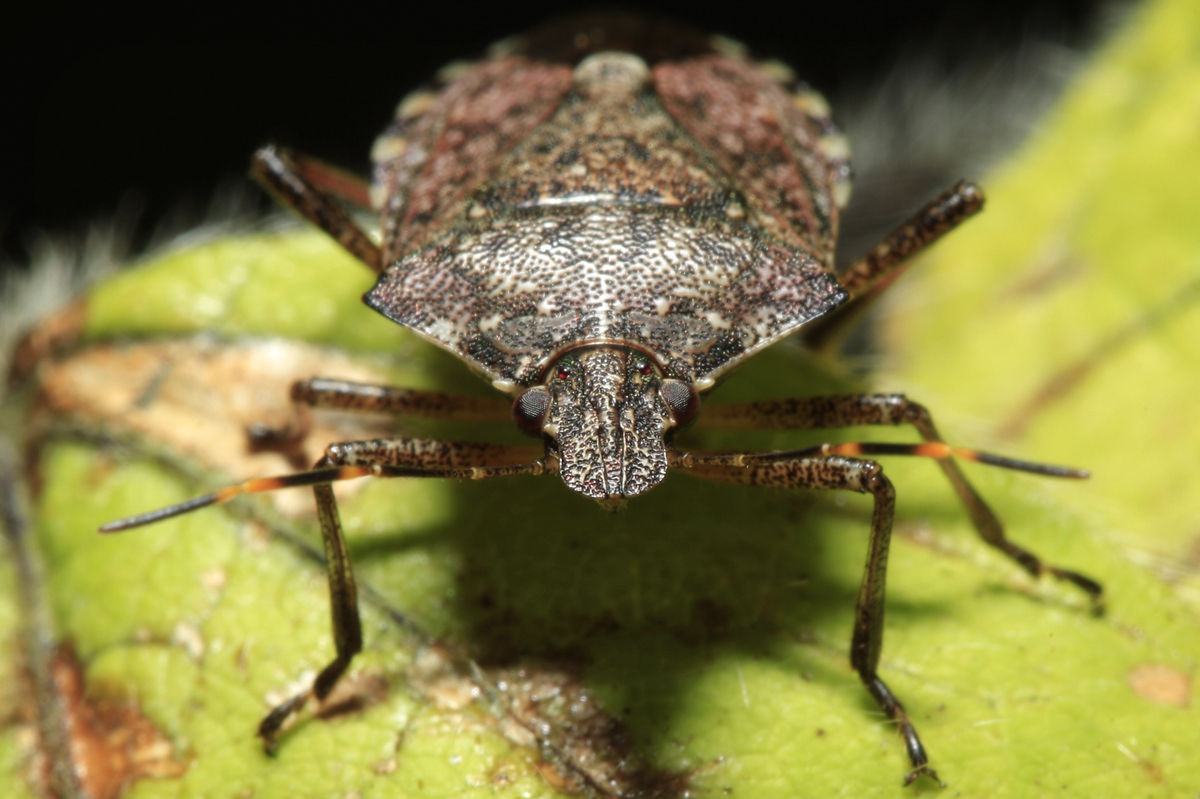 The invasive brown marmorated stink bug has become an expensive nuisance for U.S. farmers. It has spread to 40 states and eats about 100 different crops.

The brown marmorated stink bug doesn't just smell bad. It's also been causing trouble for homeowners and farmers from New Hampshire to California for the past three years.

No predators are eating the invasive species fast enough to keep it under control, but researchers think they may have found a solution to the stink-bug menace.

The inch-long pest looks like a little brown shield. The bug has spread to 40 states since it was accidentally introduced from Asia in the 1990s and spotted in Pennsylvania. It can eat about 100 different crops, from soybeans to apples, and has led to millions of dollars in crop damage. U.S. apple growers lost $37 million to the bug in 2010.

The bug has also been a disgusting nuisance to homeowners like Chris Highland, who has been selling real estate in Frederick, Md., for 20 years. 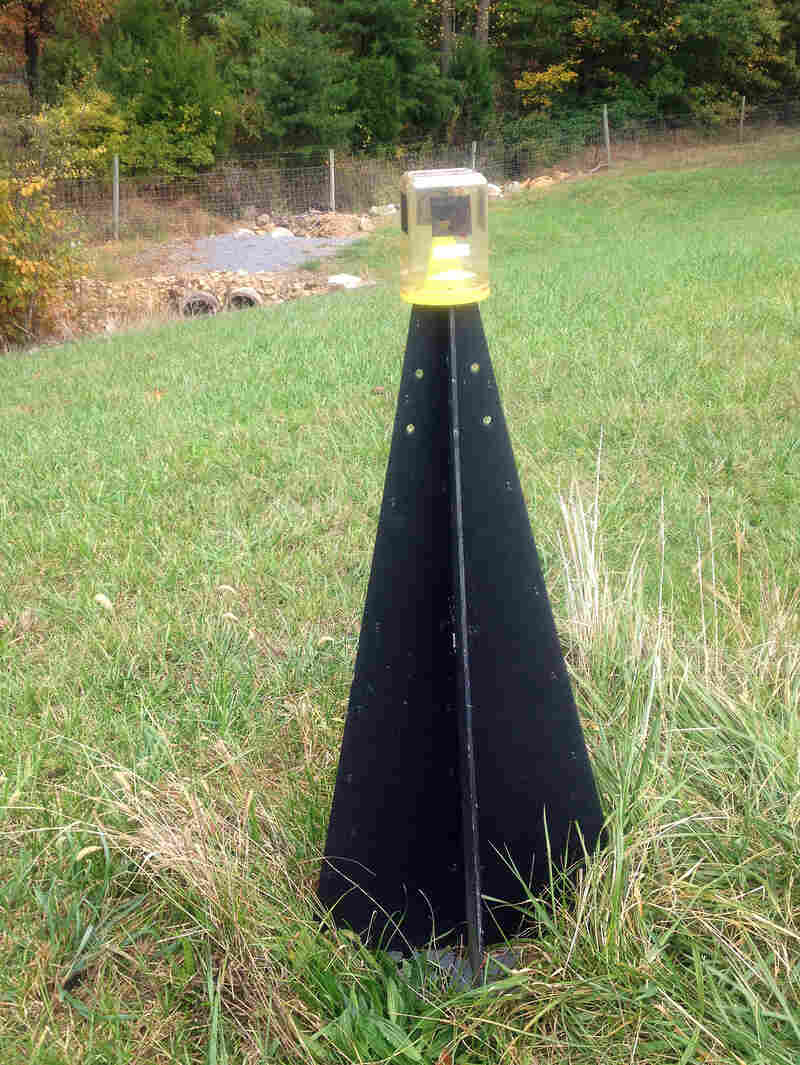 Simple traps containing stink bug pheromones can attract and kill large numbers of the bugs all at once. Alan Yu/NPR hide caption 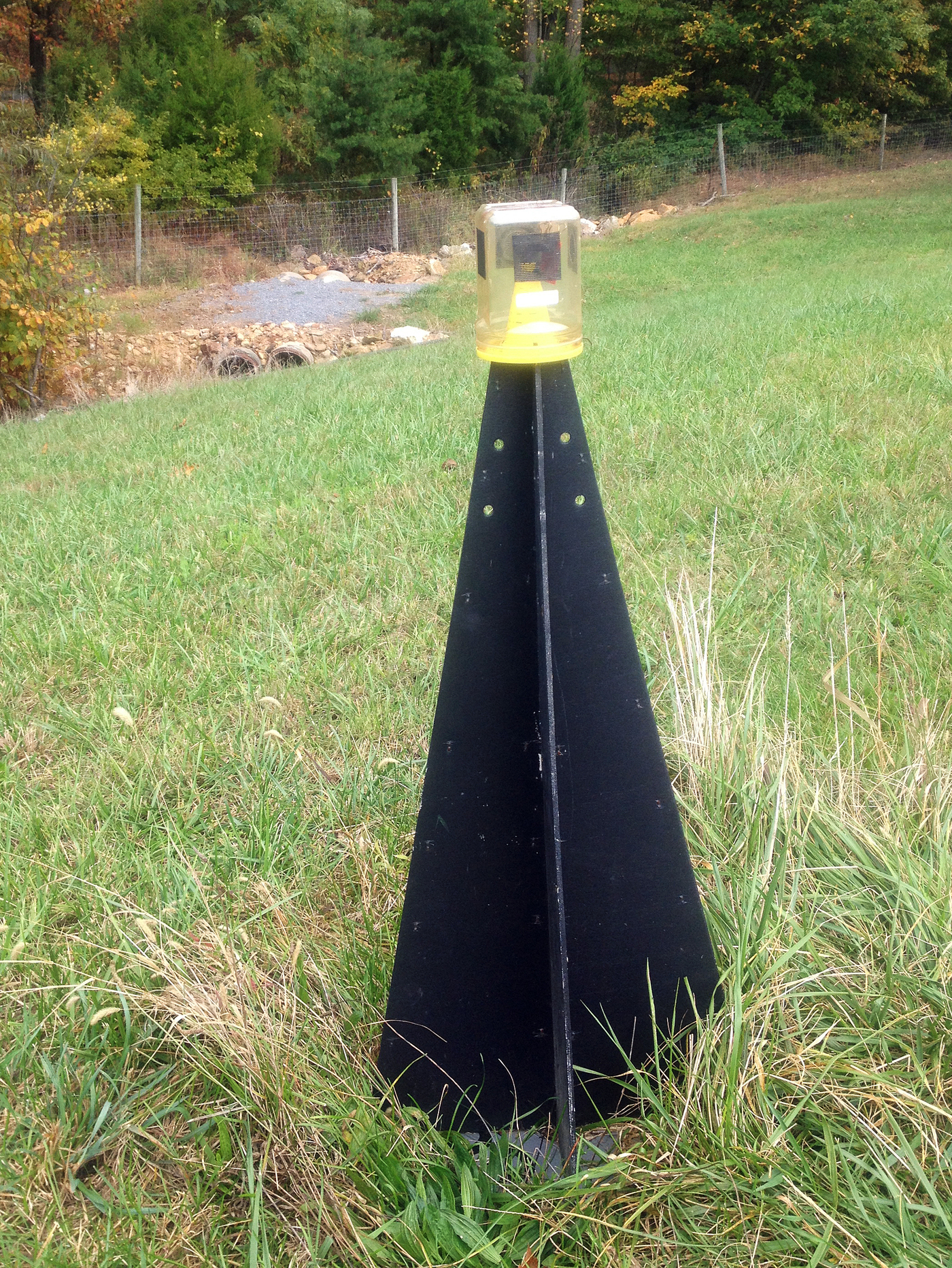 Simple traps containing stink bug pheromones can attract and kill large numbers of the bugs all at once.

Stink bugs are everywhere in Highland's house. When I visit, he immediately points to one climbing the wall above the kitchen cabinets and another crawling by the window sill.

"I talk to exterminators regularly, and my best exterminators tell me these are anything but gone," Highland says. As he finishes his sentence, a stink bug flies in front of his face.

Highland's office is about 10 miles away, and this fall he has been dealing with even more stink bugs there.

"[Office staff] scooped up in the vacuum about 300 to 400 stink bugs" on one afternoon, he recalls. "And the stink was bad — took the whole weekend to air out the building."

While Highland and his wife, Karen, are used to the pungent odor, they struggle to describe just what it smells like. Highland offers to demonstrate by killing one of the several stink bugs in his kitchen — a suggestion that I politely decline.

Karen Highland then takes me to their living room and points to a blue plastic cup with a few dead stink bugs floating inside. "People are resorting to these kind of 'death jars,' as my friend calls them, to try to catch them," she says.

It's a jar (in this case, a cup) filled with soapy water. Once a stink bug gets inside, it can't get out and then drowns.

Death jars may be good enough for homeowners like the Highlands, but Bob Black needs bigger guns. He owns an orchard 17 miles north, where stink bugs are eating up his apples, peaches and pears. The insecticide he was using was not working.

Stink Bug's Resurfacing May Squash Farmers' Hopes For A Strong 2013

"They just were eating it up like candy," Black says. He could spray a stronger insecticide, but he's worried about killing predators that eat other pests.

"We love having good bugs work for us for free to eat the bad bugs, but this brown marmorated is like a little tank. It's pretty tough," he says.

For the past three years, Black has been part of a federal experiment to try to crack the stink-bug offensive. U.S. Department of Agriculture scientists have been testing pheromone traps that attract and kill the bugs. And USDA researcher Tracy Leskey says they work: The traps annihilated more than 60,000 stink bugs in a little more than 20 baited trees.

The trap itself looks like a 3-foot-tall black arrowhead that's pointing up, topped with a plastic jar that's upside down. The stink bugs think the structure is a tree, Leskey explains.

"Brown marmorated stink bugs, like many insects, have a natural tendency to climb up, and so this exploits that behavior," she says.

She points to a small piece of rubber inside the jar, which looks like the eraser at the end of a pencil. That holds a stink-bug pheromone, and, combined with another chemical in the trap, creates a powerful homing beacon for brown marmorated stink bugs. Using the trap is just a matter of putting the piece of rubber inside the jar, along with a kill strip holding an insecticide.

The researchers have lined these traps around Black's farm like sentries guarding the crops. The traps aren't hard to make, and the pheromone should be for sale soon, Leskey says.

While the traps keep stink bugs out, they don't kill all of them. But a more permanent solution may be on the way.

"One of the things that we believe to be key to this battle is biological control," Leskey says. In other words, bringing in something that kills the bugs.

In this case, USDA researchers have identified wasps from Asia that attack the eggs of the brown marmorated stink bug.

The USDA researchers are about to submit a proposal to release the wasps into the wild, once they conclude it won't damage the environment or other native species. If all goes well, they could release the wasps next year.