Accessibility links
Military Protester Finds Skeptical Audience At Supreme Court The First Amendment loomed large at the U.S. Supreme Court on Wednesday, as the justices considered a case testing the rights of protesters in public areas that are part of large military installations. But the justices seemed more comfortable focusing on property easement issues than big constitutional questions. 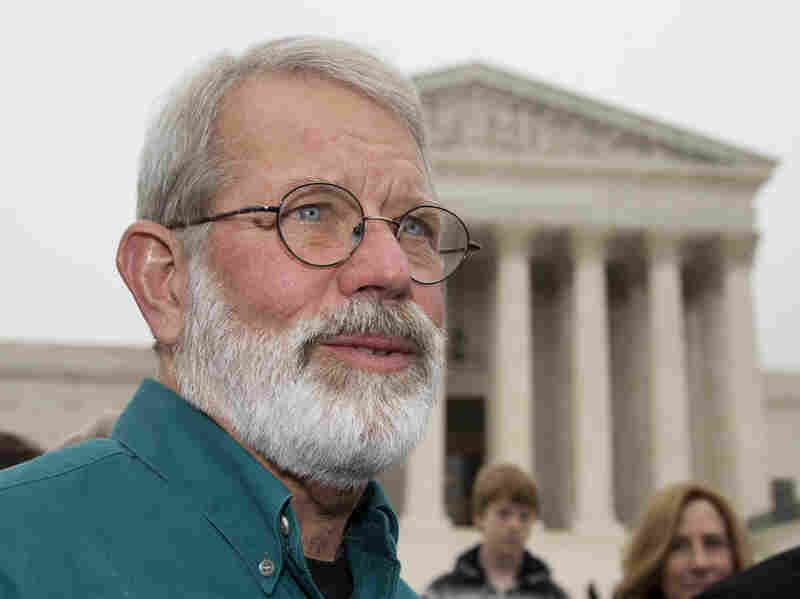 John Dennis Apel speaks outside the Supreme Court on Wednesday, after oral arguments in his case. The justices are considering whether Apel has the right to protest at a military base. Manuel Balce Ceneta/AP hide caption 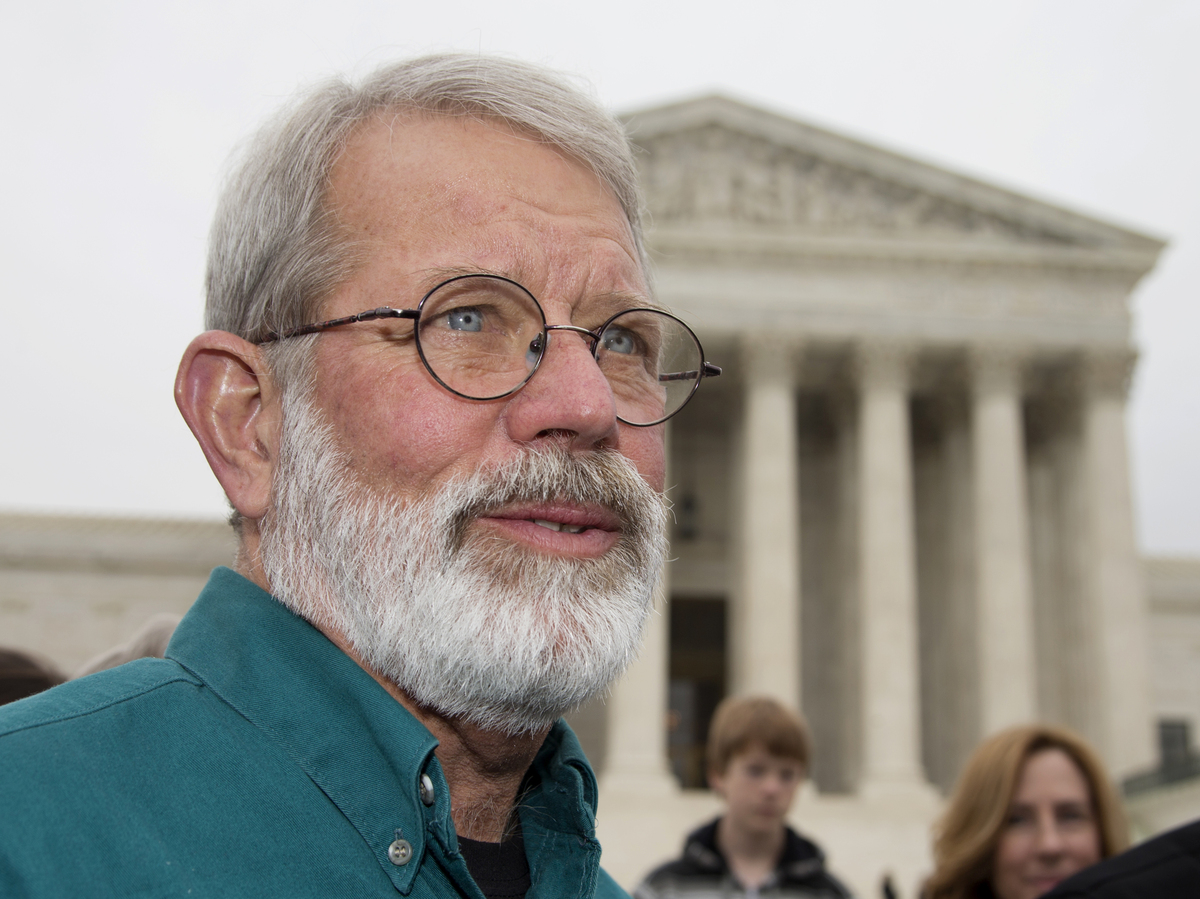 John Dennis Apel speaks outside the Supreme Court on Wednesday, after oral arguments in his case. The justices are considering whether Apel has the right to protest at a military base.

The First Amendment loomed large at the U.S. Supreme Court on Wednesday, as the justices considered a case testing the rights of protesters in public areas that are part of large military installations.

But the court, it seemed, was not in the mood for big constitutional questions.

The case involved misdemeanor convictions against John Dennis Apel, who has been protesting at Vandenberg Air Force Base in California for more than a decade. Normally he does nothing more than voice his discontent with U.S. policy. But in 2003, at the beginning of the Iraq War, he threw some of his own blood on the sign at the gate to the closed part of the base.

Apel was convicted of a vandalism misdemeanor, and the commanding officer of Vandenberg formally barred him from the entirety of the installation. He was barred a second time in 2007, and in 2010, he was convicted of violating that order by protesting in an area that had been designated for protests.

Now, Vandenberg is not exactly what most people think of when they imagine a military installation. Its 22 square miles include public schools, public access roads to beaches, stores that are open to the public, a train station. And — most important — the installation is bisected by the Pacific Coast Highway.

Part of the dispute in this case is whether, under federal law, the "military installation" includes the closed and open parts of the base or just the closed part of the base.

About 200 yards from the fenced-off and closed part of the base is a painted green line, not far from the main entrance. Just beyond that is a piece of land that has been designated by the base commanding officer as a protest zone. And just beyond that is the public highway.

As Apel sees it, the base is very clear about where the line is between the public and military areas. It is the green line, and he didn't cross that line in 2010. Therefore he can't be prosecuted for violating the order barring him from the base, he contends.

"I didn't recross the green line," Apel said Wednesday on the steps of the Supreme Court. "I stood with my companions on the public highway and held a sign saying what happens at that base is completely immoral."

That's not how the government sees things, however. As Assistant Solicitor General Benjamin Horwich told the justices, it is not just the closed part of the base that is covered by the base commander's order barring Apel.

"All of it" is covered, said Horwich. The public roads, everything. And the "rules that apply to the general public don't apply to" Apel, because he has been barred from the entire base.

Justice Sonia Sotomayor noted that the base has a "green line around it to tell people which sections you are actually considering the camp," and that Apel was outside that area.

Horwich replied that nothing is inviolate because this is a military installation. Thus, for instance, on Thursday the commander is shutting down the public highway during a missile launch.

When Justice Samuel Alito also inquired about the meaning of the green line, Horwich replied that it is there to demarcate the easement lines where state and local governments have some authority and responsibility.

Representing protester Apel, Erwin Chemerinsky, dean of the School of Law at the University of California, Irvine, made the counterargument. He opened by telling the justices that this case is "indistinguishable" from the court's 1972 decision declaring that a commander could not bar a person from distributing leaflets on a street within a military base that was open to the public.

This case, he maintained, is only about the criminal statute and what it means in light of the easements that were granted to the state and local governments. And nothing in those easements diminishes the commander's authority.

But, responded Chemerinsky, there are constitutional limits to that authority. While the commander can close the road for a launch, he couldn't, for instance "exclude African-Americans from that road."

"You keep sliding into the First Amendment issue," interjected Justice Antonin Scalia. "We're only interested in whether the statute applies."

Chemerinsky noted that Apel had raised the First Amendment question in the lower courts, too, and therefore can raise it in the Supreme Court.

"You can raise it, but we don't have to listen to it," replied Scalia.

"The United States wants it both ways," said Chemerinsky. It wants the state to be responsible for maintaining the public road, enforcing the law on the road, and to be liable for harms on the road. "But they also want to claim that they have all of the control over that public road as they would within the base."

Scalia was unconvinced: "They're entitled to have it both ways. It's their base."

Pressed by other justices, Chemerinsky said that the government is free to draw the green line wherever it chooses. But here, having done that, having created a public road and having designated a protest area, it could not exclude Apel from that area.