Accessibility links
Movie Review - 'Inside Llewyn Davis' - A Spinner Of Sad Songs, Struggling To Sing Past The Gloom Inside Llewyn Davis, The latest film from Joel and Ethan Coen, focuses on a self-destructive folk singer just scraping by in Greenwich Village in the 1960s. Oscar Isaac, Carey Mulligan, Justin Timberlake and John Goodman star. (Recommended) 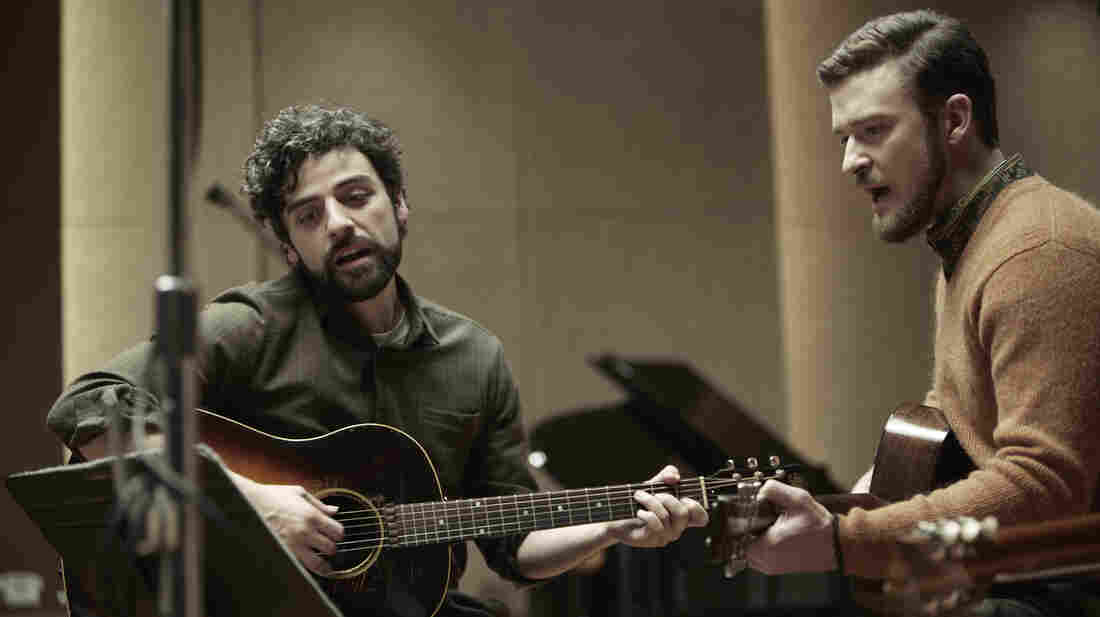 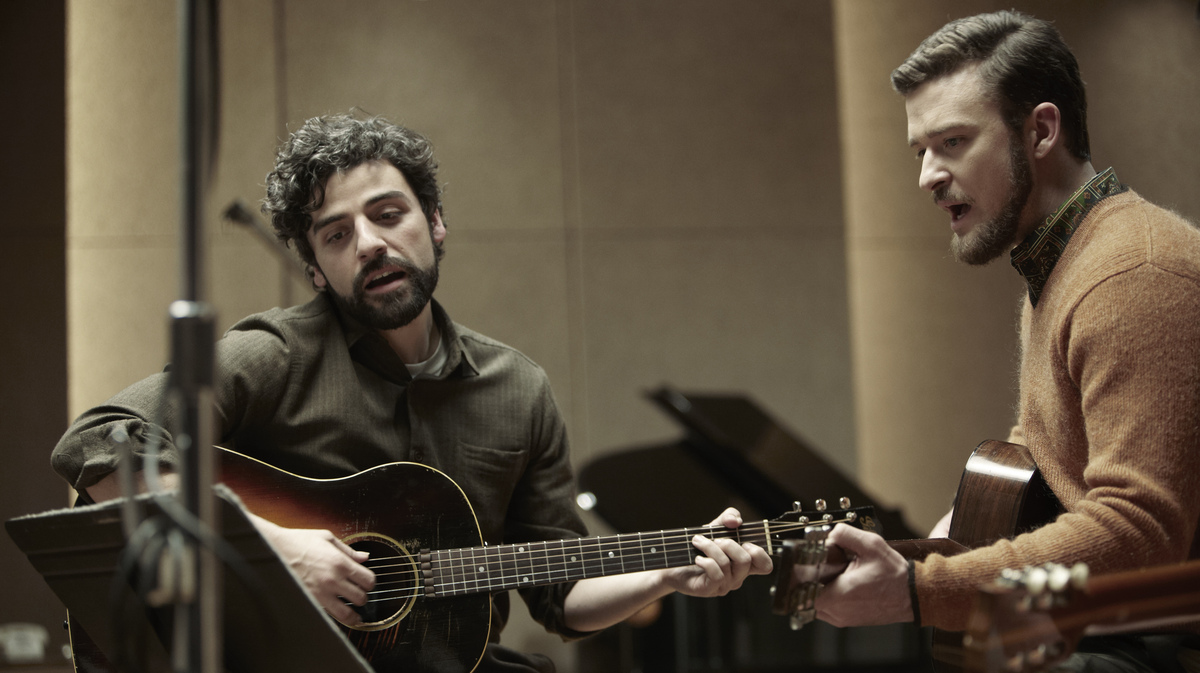 Folk singer Llewyn Davis (Oscar Isaac, left) is barely surviving the 1961 winter in New York, living off the proceeds of his occasional gigs — and the kindness of friends like Jim (Justin Timberlake).

Rated R for language including some sexual references.

The title character of Inside Llewyn Davis starts and ends the film in a little Greenwich Village folk club in 1961, singing the gloomy traditional tune "Hang Me, Oh Hang Me." The song's world-weary protagonist resigns himself to his impending death, really bothered only by the eternity he'll spend trapped underground in the grave.

But then resignation is pretty much the default mode for Llewyn (Oscar Isaac), a former merchant marine and semi-obscure folk musician. Homeless, crashing on couches with any friend or acquaintance who'll take him, he's scraping by on the occasional gig. His lingering air of self-defeat dooms his meager, sporadic attempts at personal advancement to be met with disinterest by a universe that's indifferent at best, coldly cruel at worst.

The song that opens the film was popularized by Dave Van Ronk, a musician of the same era who serves as a loose inspiration for writer-directors Joel and Ethan Coen. Many of the basic facts of Llewyn Davis' biography match those of Van Ronk, but apart from those borrowings and a few anecdotes, the character himself is a distinctly, recognizably Coen creation. He'll weather a barrage of tribulations not unlike those that have greeted the Coen brothers' other rumpled heroes — think Barton Fink, Jeff Lebowski, Larry Gopnik. 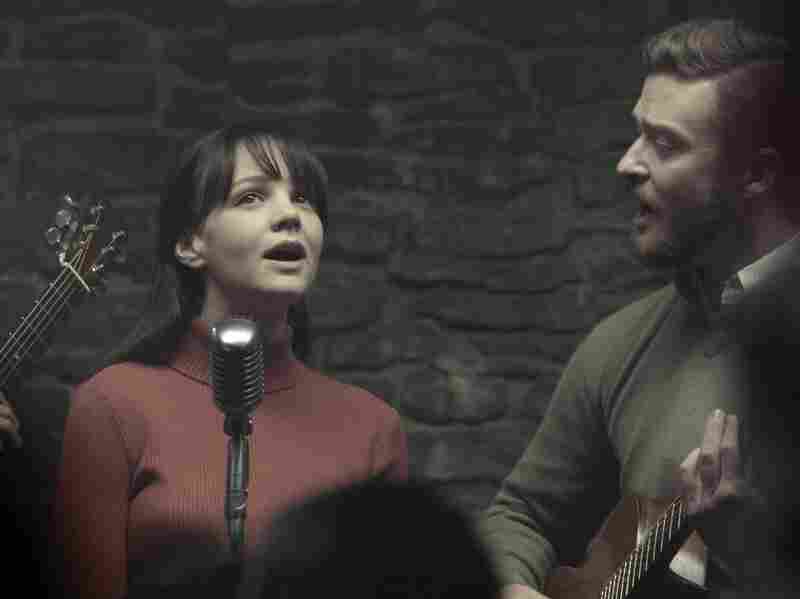 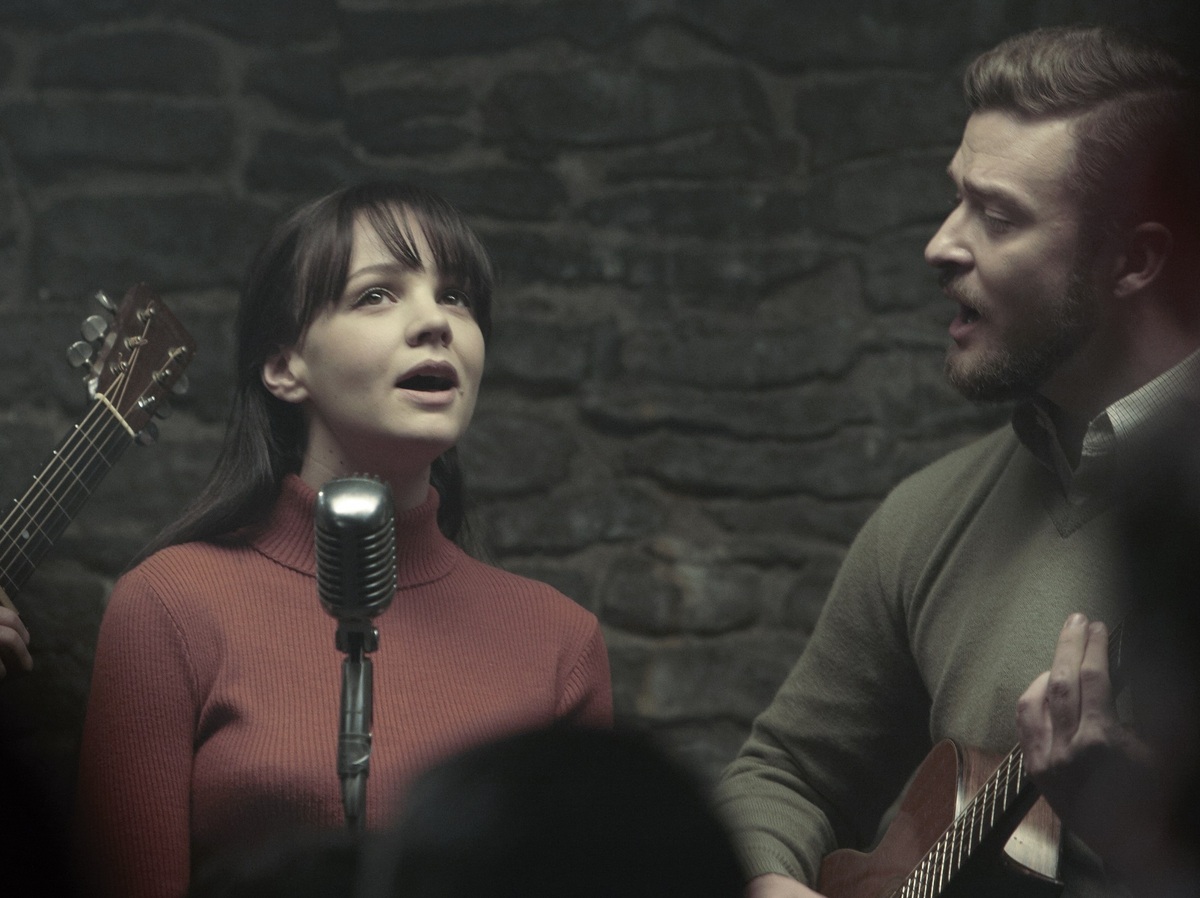 As in those characters' stories, there's comedy here, but it's tempered by a grim mood. Matched by the gorgeous muted blues and grays that mark cinematographer Bruno Delbonnel's vision of a hard New York winter, it's as bleak as anything encountered in the Coens' masterful 2007 Cormac McCarthy adaptation, No Country for Old Men. The brothers challenge their audience to find the vanishingly fine line between nervous laughter at Llewyn's relatable human foibles and schadenfreude over the notion that his defeats represent a morally just comeuppance; the often unlikeable Llewyn brings most of his woes on himself, after all, usually by failing to think through the consequences of his impulses.

And yet shreds of sympathy for Llewyn survive among most everyone he wrongs, whether it's the kindly Upper East Side intellectuals he rages at when not enjoying their patronage, or Jim (Justin Timberlake), a more successful musician he casually insults during a recording session, or Jean (Carey Mulligan), Jim's girlfriend, whom Llewyn has gotten pregnant. They never quite write off Llewyn completely, even if he does himself. And there's a vulnerability and hopefulness that comes through in his musical performances that manages to keep us on his side, too.

In a movie set up to trap us within Llewyn's repetitive loop of failure, baiting us with hope before quashing it with quiet desperation again and again, something more than comic relief is needed to soften the blow a little, and the film's musical interludes are that pillow. A mix of old folk tunes with a few new compositions in the same style — supervised by frequent Coen musical collaborator T-Bone Burnett along with Mumford & Sons' Marcus Mumford — music is as vital to Inside Llewyn Davis as it was to O Brother, Where Art Thou. The actors perform their own songs, and Isaac is especially impressive, not just for the disarming beauty of his voice but also for his ability to show us a sweet and soulful side of Llewyn that supplants his usual bitterness when he has a guitar in his hands.

That's as far as the Coens are really willing to go as far as crowd-pleasing, though. Much of their impressive output since the brief hiatus after the failure of their 2004 remake of The Ladykillers has been typified by abrupt, indefinite endings and thoughtful moral explorations of the balance between order and chaos. Inside Llewyn Davis is no different in that regard, and it represents not just another in a streak of brilliant films, but the finest blend yet of the duo's sharp, laugh-out-loud wit and sobering insight into the loneliness and absurdity of existence.

In film after moving film, that blend has allowed the Coen brothers to achieve an emotional and intellectual complexity that never overwhelms their knack for being purely entertaining. The laughs are always there, but each one comes at a cost. This time around, it's poor Llewyn Davis' turn to pick up the check. (Recommended)