Accessibility links
Movie Review - 'Out of the Furnace' - A Blaze Fueled By Manly Malice Just out of prison, a Pennsylvania man (Christian Bale) finds that his girlfriend has moved on and his younger brother is mixed up with criminals, in Out of the Furnace. Zoe Saldana, Woody Harrelson and Casey Affleck costar.

A 'Furnace' Fueled By Manly Malice

A 'Furnace' Fueled By Manly Malice 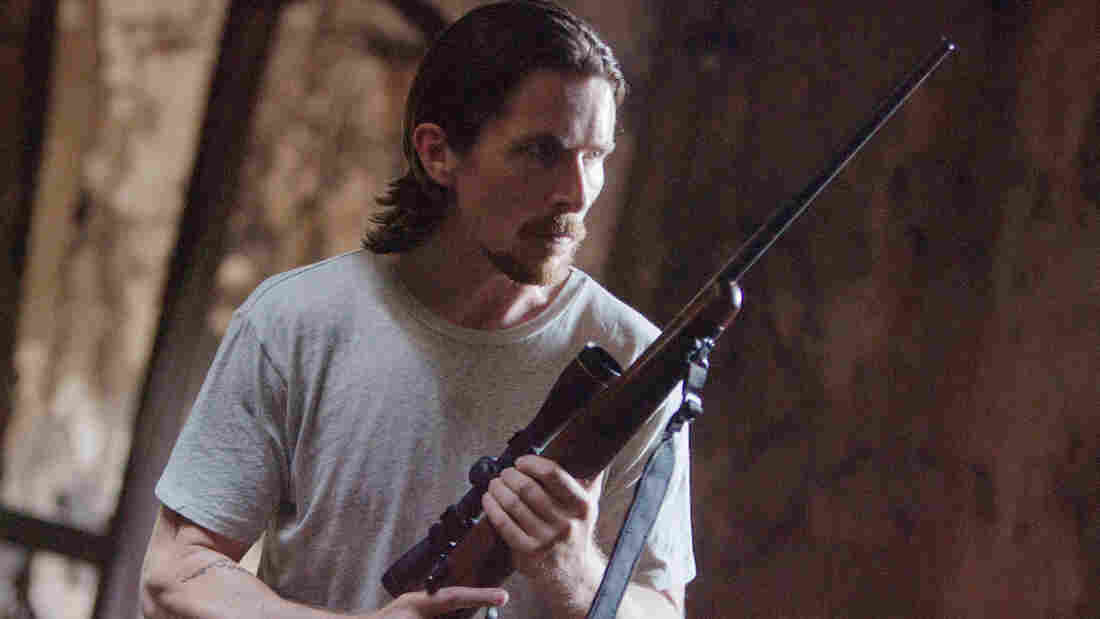 When his younger brother disappears after getting entangled with a rough customer, Russell (Christian Bale) grabs a gun and heads out to hunt for him. Kerry Hayes/Relativity Media hide caption 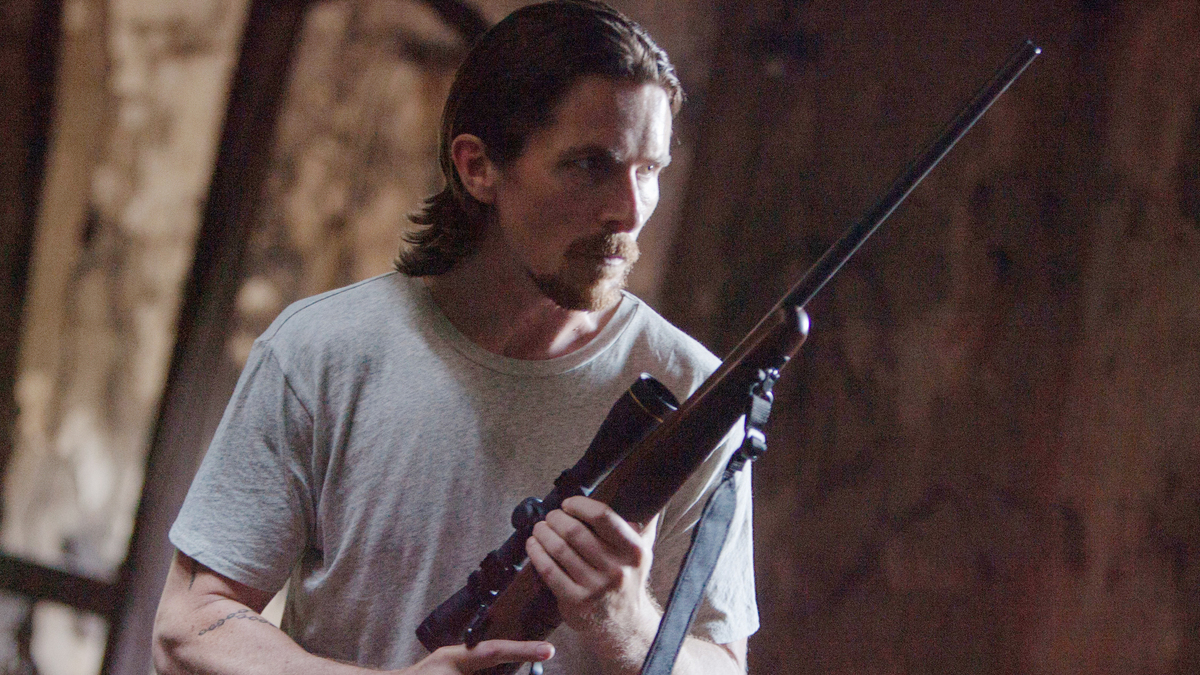 When his younger brother disappears after getting entangled with a rough customer, Russell (Christian Bale) grabs a gun and heads out to hunt for him.

Out of the Furnace

Both literally and thematically dark, Out of the Furnace simmers with manliness like a slow-cooking pot of venison chili. This is the sort of movie where character is revealed by what the protagonist decides to hunt and possibly kill.

A noble buck in the Pennsylvania woods? Maybe not. A murderous, meth-dealing bare-knuckle-boxing promoter? Bang!

Our hero is Russell (Christian Bale), a small-town dark knight. He works near the belching furnace of a steel mill in Braddock, one of those rust-belt decrepitudes that draw photographers and filmmakers keen to eulogize American industry.

Perhaps because he wants to minimize dialogue, director and co-writer Scott Cooper starts the tale several years before most storytellers would. It's 2008, as Cooper indicates with a clip of Teddy Kennedy endorsing Barack Obama. Russell's father is dying, and his hotheaded younger brother, Rodney (Casey Affleck), is headed to a fourth tour in Iraq. At least Russell has a job and a girlfriend (Zoe Saldana).

Then a nasty car crash sends Russell to prison. (It wasn't really his fault, but he had been drinking.) When he gets out, Dad's dead and girlfriend Lena has moved on to a passionless but safe relationship with a local cop (Forest Whitaker). Rodney, for his part, is boxing for an amiable local bookie and loan shark (Willem Dafoe), though he's soon to meet a much more dangerous example of that breed, Harlan (Woody Harrelson). 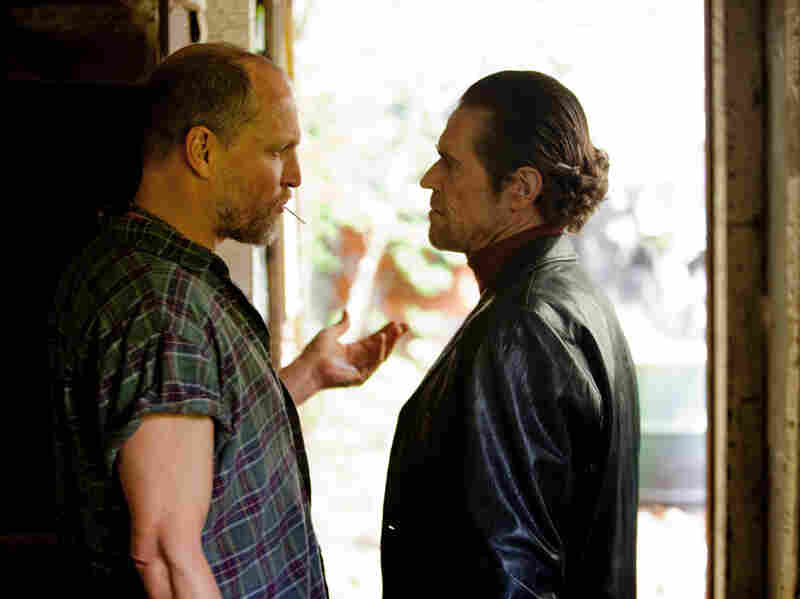 Rodney gets mixed up with the wrong kind of people while Russell is in prison, including a loan shark (Willem Dafoe, right), and a psychotic bookie (Woody Harrelson, left). Kerry Hayes/Relativity Media hide caption 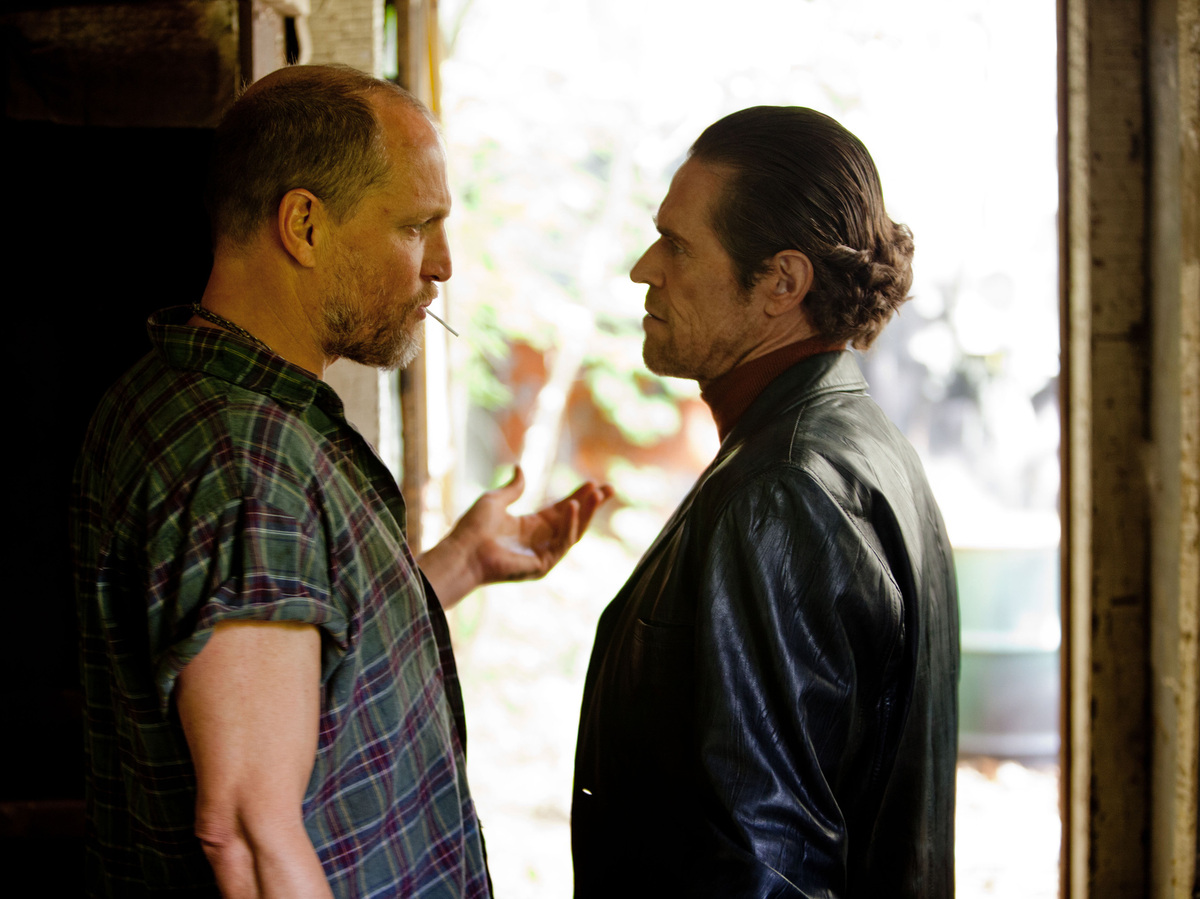 Rodney gets mixed up with the wrong kind of people while Russell is in prison, including a loan shark (Willem Dafoe, right), and a psychotic bookie (Woody Harrelson, left).

After angering the easily maddened Harlan, Rodney disappears. Russell and his uncle (Sam Shepard) go looking for him on Harlan's home turf, a backwoods section of New Jersey that seems more like West Virginia. There are several wrong turns and dead ends before the final showdown, which is more sorrowful than exhilarating.

Cooper's previous movie, the overrated Crazy Heart, indulged a different sort of macho. Its tale of an alcoholic country singer on the road and in decline seems positively jaunty next to Out of the Furnace, whose musical signature is Pearl Jam's plaintive "Release." (The song plays at both the movie's beginning and end.)

The film, like the recent Mother of George, is distractingly dim. Cinematographer Masanobu Takayanagi illuminates many scenes with light from behind or outside, keeping the cast's haggard faces in shadow. The effect is a little artier than befits this unusually deliberate but otherwise predictable drama.

The movie boasts two kinds of showcases. The first are elaborately crosscut sequences in which good men and bad men act all too simultaneously. These turn on violence, which apparently is the currency of male existence, or at least working-class rust-belt male existence.

Better are the simple, heartfelt scenes in which Russell and Lena fight their feelings for each other in the hope that Lena can have the stable, nurturing life she wants. Such moments are far more interesting than Harrelson's showy turn as a lollipop-sucking psychopath.

That love is preferable to death is a subversive idea for a movie full of tough guys who can't walk away from mayhem, whether because of family, duty, PTSD or just for the heck of it. But there are merely glimmers of that moral in this grim ode to vengeance.

Cooper does slow the action and set it in the least glamorous of circumstances, which drains the pleasure from the thriller conventions. But just because Out of the Furnace isn't much fun doesn't make it profound.