Accessibility links
Beyond Good Cop/Bad Cop: A Look At Real-Life Interrogations How close are TV interrogations to the real thing? Not very, says Douglas Starr. In a New Yorker article, he explores the "gold standard" of interrogation methods, developed in the 1940s. But there's concern that this technique is based on outdated science, and may produce false confessions. 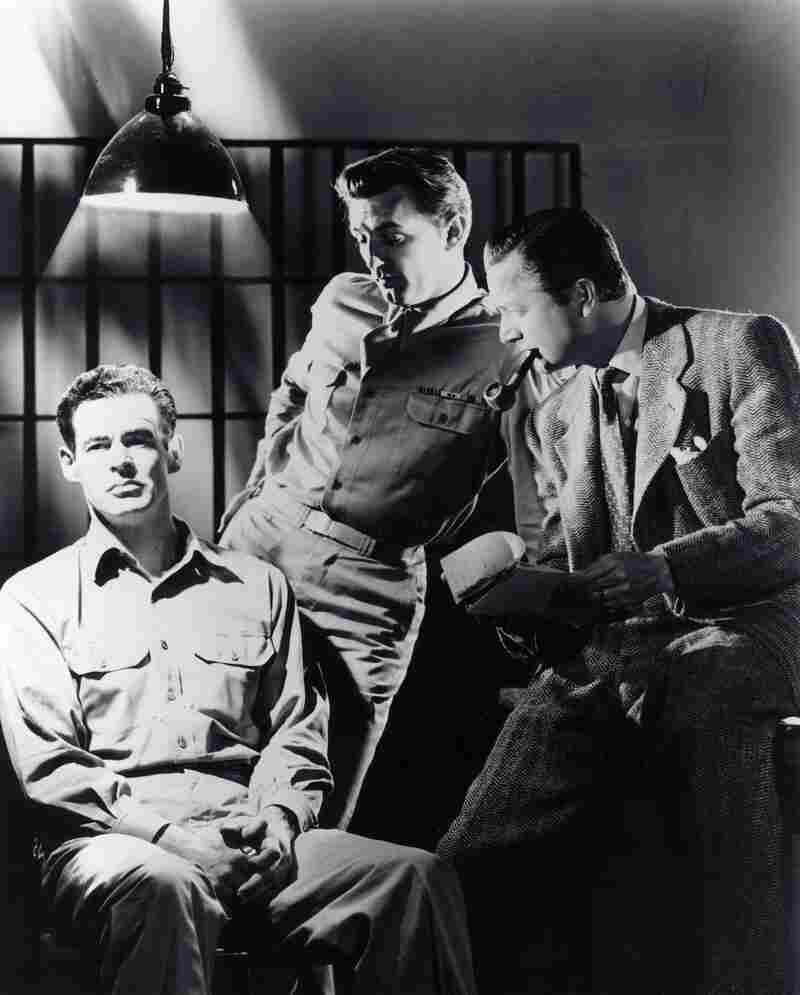 A lot of what we think we know about interrogation tactics comes from television and movies. Above (from left), Robert Ryan, Robert Mitchum and Robert Young appear in a scene from the 1947 film Crossfire. The Kobal Collection hide caption 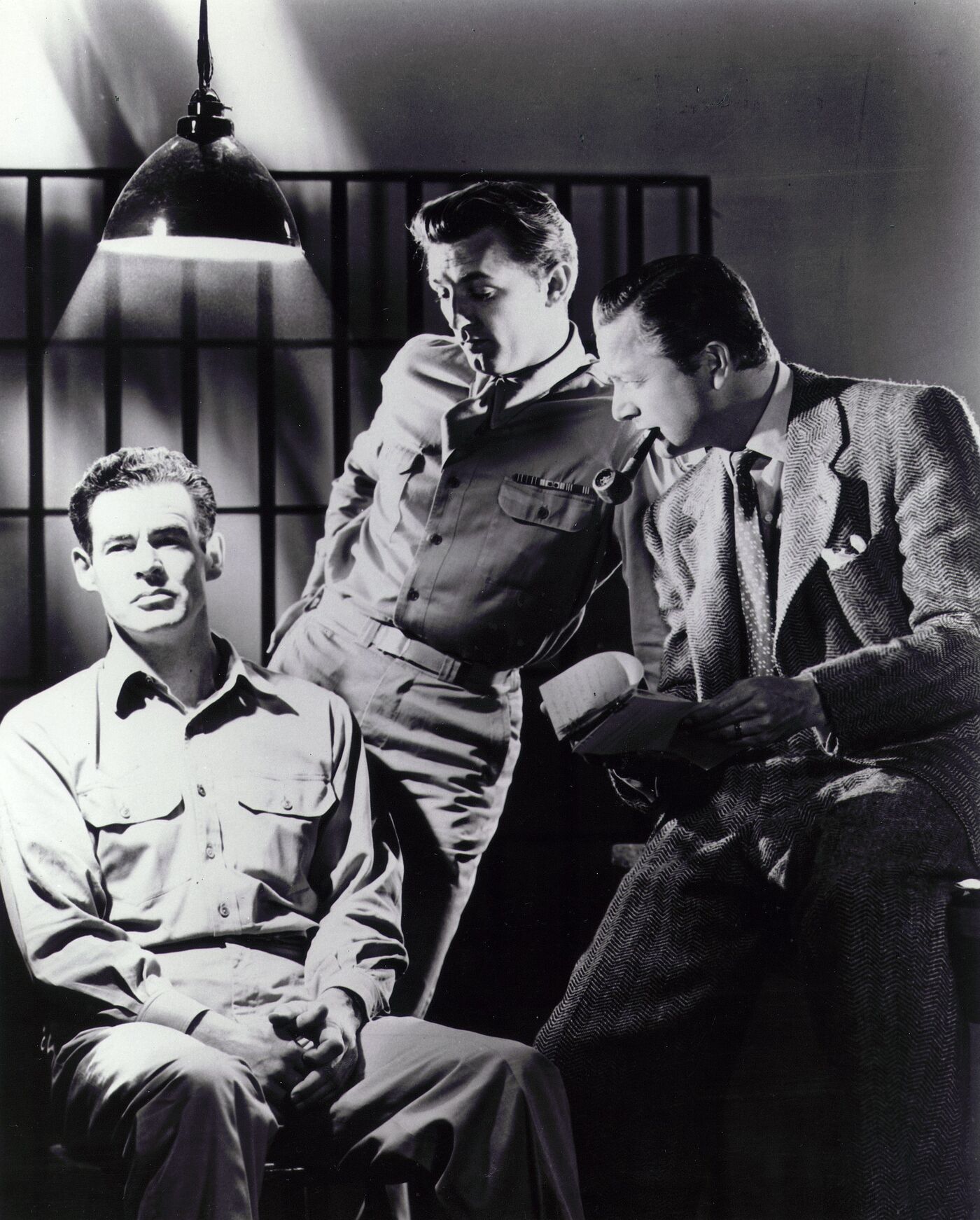 A lot of what we think we know about interrogation tactics comes from television and movies. Above (from left), Robert Ryan, Robert Mitchum and Robert Young appear in a scene from the 1947 film Crossfire.

We see a lot of police interrogation on TV, but how closely do those high-adrenaline scenes resemble the real thing? According to Douglas Starr, not much. In his new New Yorker article, "The Interview: Do Police Interrogation Techniques Produce False Confessions?", Starr examines the Reid technique, the style of interrogation most widely used by police forces in the U.S.

Created in the 1940s by former Chicago policeman John Reid, the method "is really considered the gold standard of interview and interrogation techniques," Starr tells Fresh Air's Terry Gross. With Reid's "near monopoly" on interrogation training, Starr says, hundreds of thousands of law enforcement officials have been trained on the technique since the '70s.

As part of his research, Starr took a training course in the Reid technique. "It has the appearance of being very scientific," he says. But a growing number of scientists and legal scholars say this approach is based on outdated science and psychology — and can sometimes produce false confessions.

"There doesn't seem to be a national conversation [about interrogator tactics] of any sort," Starr says, "and that's unfortunate because for every innocent person that's put away, the person who really committed the crime is still on the streets."

On the Reid technique's flaws

One of the problems of the technique is that it's based on some science that's no longer current. When John Reid was doing this in the 1950s, people thought you could see anxiety in people's body language. If they folded their arms, or hunched over, or looked away, they were being anxious, and also that anxiety was a hallmark of lying. But unfortunately, 40 years of extensive psychological research has shown both of those premises to be untrue. Anxiety has nothing to do with lying. There are many liars who could look at you straight in the eye and very calmly lie up a storm. And body language has nothing to do with deception. So the whole technique is built on some faulty premises that tend to lead police in the wrong direction. 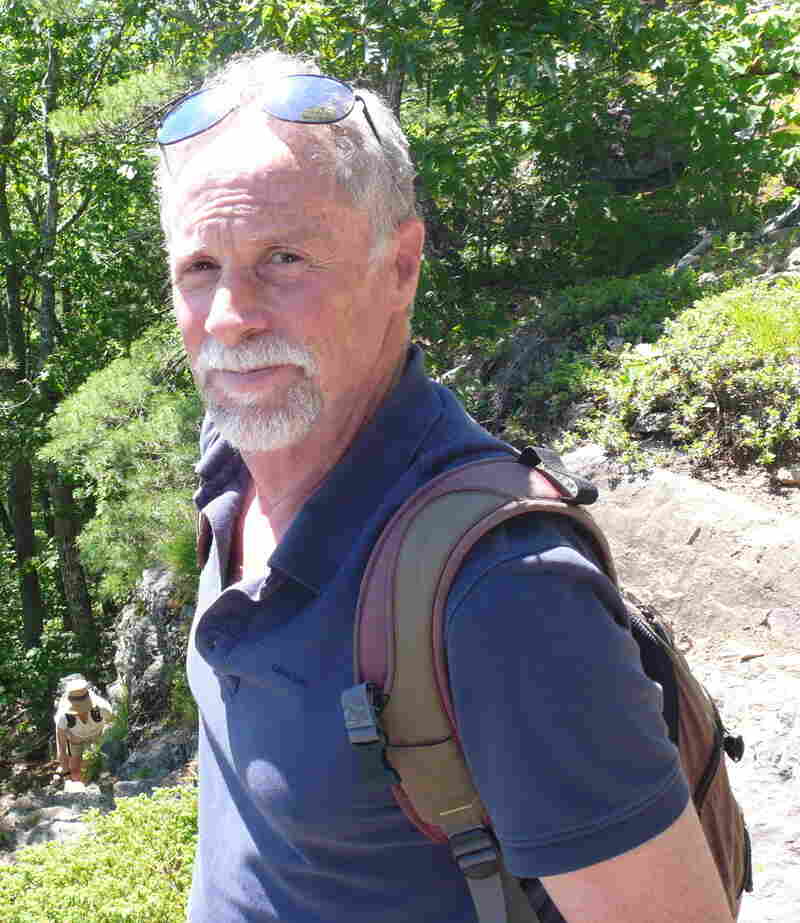 Starr is the author of The Killer of Little Shepherds and Blood: An Epic History of Medicine and Commerce. He co-directs the Program in Science Journalism at Boston University Courtesy of Douglas Starr hide caption

On what the Reid technique trains interrogators to look for

Folding arms, shifty gaze, picking imaginary lint off of your shirt, jiggling your leg, touching your hair — these are signs of anxiety. ... They also look for verbal cues like tripping up your story, sounding anxious when you talk. What they do is they ask a series of questions that trigger anxiety, and then when you show anxiety, that's confirmation that you're probably lying.

On the stages of the interrogation

The first part of the interview is called the behavioral analysis interview, and that's almost like what they do in lie-detector tests. You ask the person a number of questions, and many of the questions are neutral, and then you ask them some loaded questions. ... Then you take a pause, you go into the next room, and if you've decided they're lying, you pick up a file folder from somewhere and you walk into the room and, standing over the person, you make an accusation. You say, "Mr. Smith, we've investigated this extensively and we've come to the conclusion that you did commit this crime. So why don't we sit down and find a way to work this all out." And then you begin the interrogation part.

On playing down the moral consequences of the crime

When you're batting away [the suspect's] denials, you're closing one door ... and you start to minimize the moral consequences of what they did by opening another door. Now you can say, "Look, you're accused in causing your wife's death, I got to tell you ... my wife and I fight a lot, and the other night we were in such a knock-down drag-out argument, I didn't know what I was going to do. And if that moment the phone didn't ring, there but for the grace of God go I. I could totally understand how this happened." So what you're doing is you're minimizing the evil that they did. You're not doing any legal minimization — that's not touched — but you're lowering the barriers so the person could admit what he did and save a bit of face and dignity.

On why people give false confessions

Naive people, with faith in the justice system, tend to confess more because they're sure something will work out on the other side. The trouble is confession trumps everything. Even physical evidence will bend once somebody's confessed because confessions are so compelling.

First of all, there's a group of people who confess falsely to something because there's something wrong with them. More than 200 people confessed to the kidnapping and murder of the Lindbergh baby. ... But there are external reasons as well. ... If you're held in a room and you think there's no way out, but you're sure that the justice system will eventually exonerate you, you might actually confess just to get out of the situation. When you're in a situation where [your] denial is batted away no matter what you say and they start lowering the barrier of confession ... it becomes the easy way out. Interestingly, naive people, with faith in the justice system, tend to confess more because they're sure something will work out on the other side. The trouble is confession trumps everything. Even physical evidence will bend once somebody's confessed because confessions are so compelling.

On why many people don't exercise their Miranda rights

One of the scientists examining in the field found that, of his survey of hundreds of confessions, 80 percent of people did not invoke their Miranda rights. They want to seem nice. It seems like when you say, "Well I refuse to talk to you until I get my lawyer," it seems like that's going to antagonize the police. so people generally don't use that. ... You want to seem like a nice guy when the cops are interrogating you, and this technique depends on that. 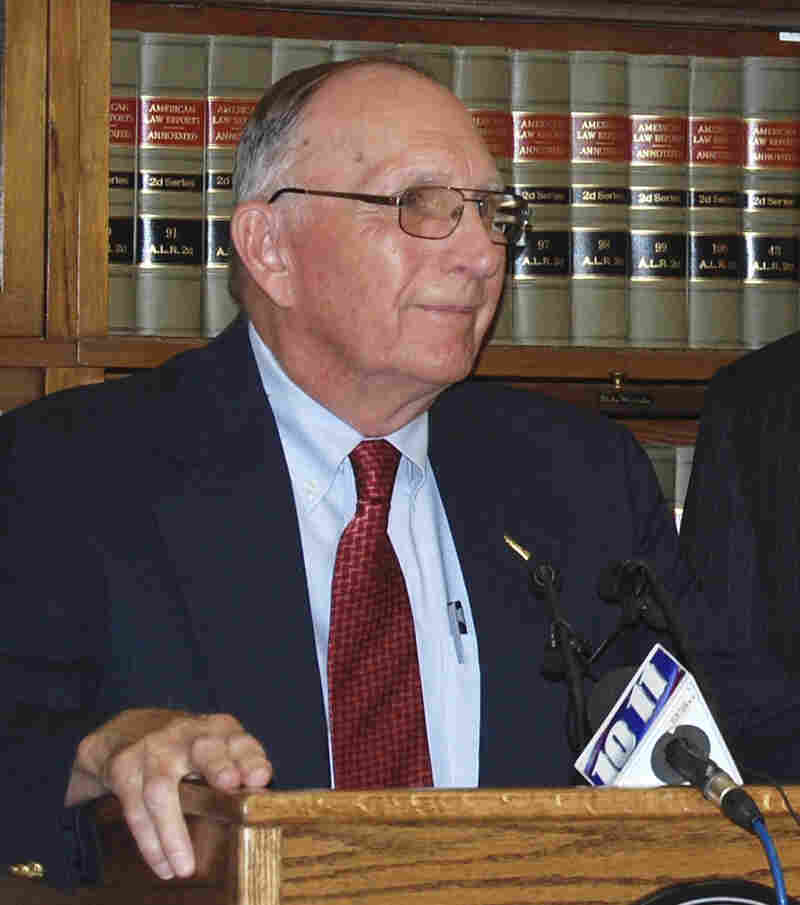 Darrel Parker spent years in prison after falsely confessing to the murder of his wife in 1955. When he was finally exonerated in his 80s, he said, "At least now I can die in peace." Shannon Kingery/AP hide caption 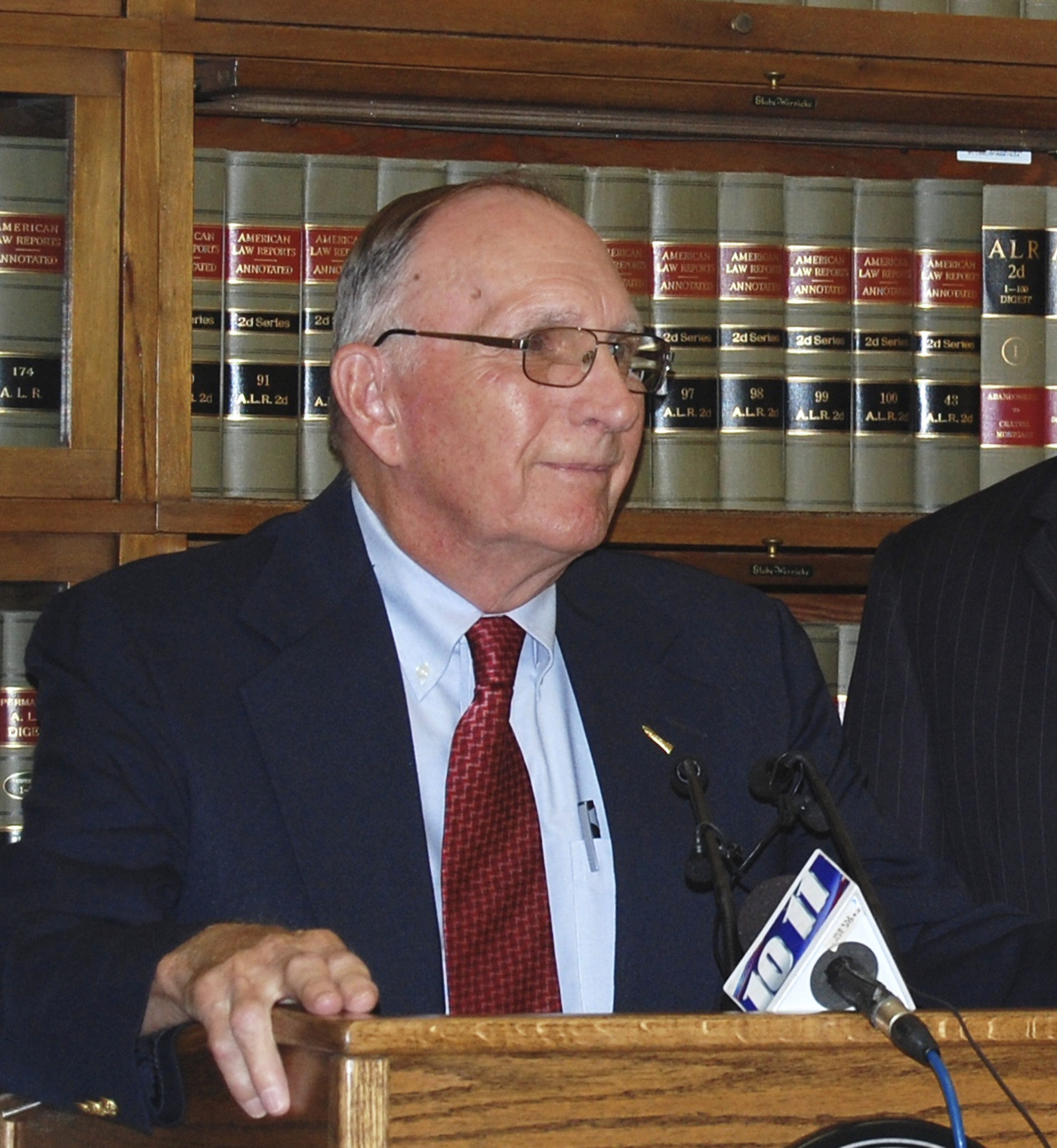 Darrel Parker spent years in prison after falsely confessing to the murder of his wife in 1955. When he was finally exonerated in his 80s, he said, "At least now I can die in peace."

On one of the first cases John Reid made his name on, which turned out to be a false confession

This was an early case in 1955. [Darrel Parker], a forester in Lincoln, Neb., came home to find his wife had been brutally raped and murdered, and John Reid himself was called in to do the interrogation. ... Over a period of many hours, he got Parker to admit that he killed his wife, even though Parker didn't; [he] was just stunned. It was a nine-hour interrogation. Reid kept suggesting that his wife was unfaithful, and Parker eventually succumbed to the suggestion. He never stopped believing his innocence, and over the years as Reid grew his reputation and grew his company ... Parker kept trying to get his case reversed. He was let out of jail in 1970 ... but was not exonerated.

Years later, a career criminal named Wesley Peery who had briefly been a suspect in the case and was in jail for another murder wrote a memoir in which he admitted killing Nancy Parker. He gave it to his attorneys, but because of attorney-client privilege it had to remain confidential. [In] 1988 when he died, the attorney released his confession so to speak. Parker, who was out of jail, still applied for a pardon in '91 and received a pardon in '91 but not an exoneration. Finally, in 2011, just a couple of years ago, the state of Nebraska encountered a false confession scandal and passed a law saying that somebody could sue for inappropriate conviction, and [Parker] sued under that law. Finally, in the summer of 2012, the state publicly admitted [Reid's] mistake and formally exonerated [Parker], who was now in his 80s, and he said, "At least now I can die in peace."

On how confessions trump other evidence in court

People are just wired to believe that if you confess to a crime then you must've committed it. All sorts of alibis and evidence will bend or disappear once you've confessed, it's that convincing. Part of what we have to do in this discussion is move that off the table. People confess, and it may or may not be true. In terms of the efficacy of Reid technique, it gets people to confess, but there's a certain amount of collateral damage. Probably the vast majority of people who confess to this technique confess correctly, but there is collateral damage, and that is a frightening thing.

PEACE is an interview technique that more closely resembles what journalists do. It's to gather information; confessions are not sought. Unlike the Reid technique, the questioner does not try to pal up the suspect, does not try to say, "I understand where you're coming from." It's very straightforward. It's very carefully planned out. It's basically based on a different model. That model is: Lying and anxiety have nothing to do with each other, and lying and body language have nothing to do with each other. However, lying creates a cognitive load, and the more you lie, the more elements you have to juggle, and if you keep going back and asking for more and more details, eventually that system breaks down. ... What the PEACE technique helps you do is find out which part of the story is verifiable and which part isn't.