Accessibility links
Nelson Mandela: An Audio History A Radio Diaries documentary offers a window into South Africa's half-century-long struggle for democracy through rare sound recordings of freedom fighter Nelson Mandela — and those who fought with and against him. 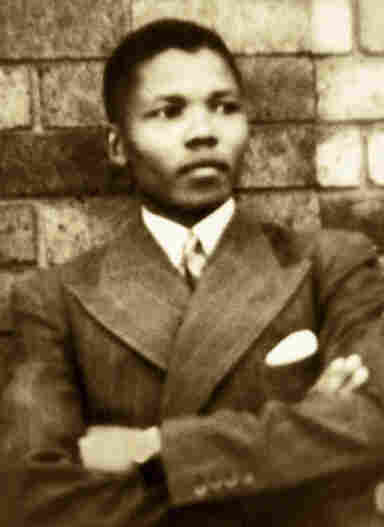 In April 1994, the world watched as millions of South Africans — most of them jubilant, but many wary — cast their ballots in that nation's first multiracial election. The outcome: Nelson Mandela became president of a new South Africa.

Mandela's journey from freedom fighter to president capped a dramatic half-century-long struggle against white rule and the institution of apartheid. This five-part series, originally produced in 2004, marked the 10th anniversary of South Africa's first free election.

Produced for NPR by Joe Richman of Radio Diaries and Sue Johnson, Mandela: An Audio History tells the story of the struggle against apartheid through rare sound recordings of Mandela himself, as well as those who fought with and against him.

In the 1940s, Nelson Mandela was one of thousands of blacks who flocked to Johannesburg in search of work. At that time, a new political party came into power promoting a new idea: the separation of whites and blacks. Apartheid was born and along with it, a half-century-long struggle to achieve democracy in South Africa.

In 1960, with the African National Congress banned, resistance to apartheid went underground. Faced with an intensified government crackdown, Mandela launched Umkhonto we Sizwe, or MK — a military wing of the ANC — and the armed struggle began. Two years later, Mandela was arrested for and convicted of high treason. He and eight others were sentenced to life in prison.

World Reflects On The Life Of Nelson Mandela

As Mandela and other political leaders languished in prison, the government crackdown appeared to have crushed the resistance movement. But on June 16, 1976, a student uprising in Soweto sparked a new generation of activism.

Guerrilla soldiers on the border, unrest in the townships, striking workers and a wave of international attention were making South Africa's system of apartheid untenable. Something had to give — and it did on Feb. 2, 1990, when South African President F.W. de Klerk announced he would lift a 30-year ban on the ANC and free Mandela after 27 years in prison.

On April 27, 1994, Mandela was elected South Africa's first black president. But that triumph didn't come easily. The four years between Mandela's release and the transition to democracy were some of the most volatile and painful in the country's history.