Accessibility links
Movie Review - 'Inside Llewyn Davis' - Brothers Joel and Ethan Coen continue to mine American pop culture in their latest film. It's 1961 in Greenwich Village, and a homeless folk singer is trying desperately to break out. Critic David Edelstein says the overarching tone of the film is snotty, condescending and cruel. 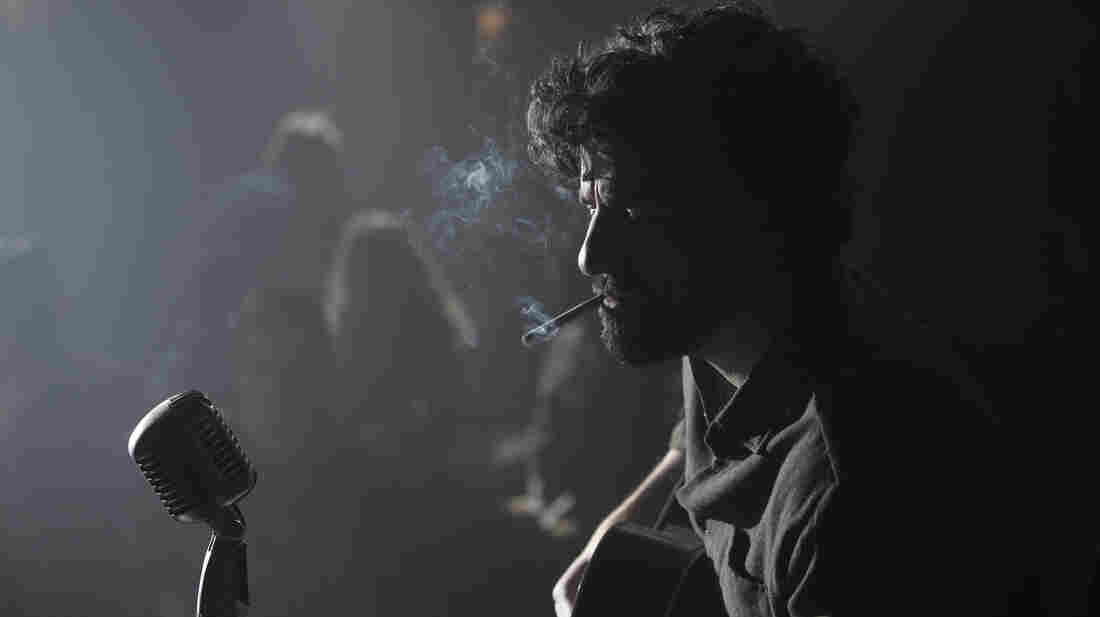 In the Coen brothers' latest film, down and out Llewyn Davis (Oscar Isaac) is trying to make ends meet as a folk singer in New York in the early 1960s. Alison Rosa/Long Strange Trip/CBS Films hide caption

Rated R for language including some sexual references.

The films of Joel and Ethan Coen pose a challenge: How do we reconcile their wildly disparate tones? Consider O Brother, Where Art Thou?, a burlesque of Homer's Odyssey centering on three stumblebums — but with a soundtrack assembled by T Bone Burnett of heartfelt historical gospel and country music. Ditto The Ladykillers: venal idiot characters, soaring African-American spirituals. The ridiculous and the sublime sit side by side, with no spillover.

Now comes Inside Llewyn Davis. It's a beautifully crafted tale of woe set in the early '60s folkie world of Greenwich Village, pre-Bob Dylan. Much of the music — again the soundtrack is produced by T Bone Burnett — is gorgeous and deeply felt. The milieu of folk clubs and coffee houses is lovingly evoked. But the overarching tone is snotty, condescending, cruel.

The title character, played by Oscar Isaac, is a man of deep contrasts. He's a jerk who uses other people, and the Coens throw misfortunes his way. They're positively fiendish. We watch his money run out and options shrink, and though we wait for something better — as in a standard rags-to-riches showbiz tale — it seems as if each anvil dropping on his head is heavier than the last.

But when he hunches over his guitar and sings standards like "Hang Me Oh Hang Me" and "The Death of Queen Jane," the film enters a more exquisite sphere.

Inside Llewyn Davis is partly inspired by the life of the late Dave Van Ronk, who was terminally overshadowed — if you believe conventional wisdom — by his quasi-protégé, Dylan. Oscar Isaac bears little physical or vocal resemblance to Van Ronk, but he, too, pulls stints in the merchant marine to keep his music career afloat, and he also bums a ride to Chicago to audition for a famous club owner and manager — in life Albert Grossman, here called "Bud Grossman," and played by a dour F. Murray Abraham. Llewyn's current manager, Mel, is ancient and disorganized.

The shtick in some scenes feels too easy, but others work better. There's a running joke with a cat that Llewyn keeps losing and finding, which leads to a two-pronged punchline, one part tragic, the other absurdly happy. The Coens worship movie fodder: archetypal faces that really read — or freaky ones that make you laugh out loud. A peppy little professor played by Ethan Phillips adopts Llewyn as a sort of bohemian pet. John Goodman shows up briefly as a foul-mouthed junkie musician pickled in his own bile. The homeless Llewyn crashes on the sofa of a folk duo known as Jim and Jean played by the radiantly ingenuous Justin Timberlake and Carey Mulligan. Onstage, Timberlake's tenor meshes perfectly with Mulligan's earth-mother tones, and she's lit like an angel — though offstage all she does is scold Llewyn for being a creep.

More On 'Inside Llewyn Davis'

On Becoming Llewyn Davis, A Hero Who Excels At Failing

For all its surface delights, Inside Llewyn Davis is thin. Those disparate tones — the mocking and the transcendent — can't be reconciled because they're meant to be irreconcilable: Once the music stops, petty humans are back in the muck. It's a sour worldview — and unearned. Only the Coens could turn that stirring early-'60s era that helped give birth to the best part of the counterculture into a sick joke.

I have no doubts about Oscar Isaac, though. With his thick, unruly hair and beard, he evokes two countercultural touchstones, Lenny Bruce and Al Pacino in Serpico. He makes Llewyn a jerk of stature, chafing at his fate but always getting that sick joke that is his life. Musically, Isaac doesn't hit every note dead on, but his singing feels richer than performers with better pipes. He gives the Coens' vision more fullness than it deserves.