Accessibility links
As We Memorialize Mandela, Remember Those Who Stood With Him By the time he died, Nelson Mandela was considered one of the few giants on the world stage. As NPR's Scott Simon remembers, Mandela was not alone in offering his life for freedom, so the acclaim justly heaped upon Mandela is also a credit to those who worked, served and led with him. 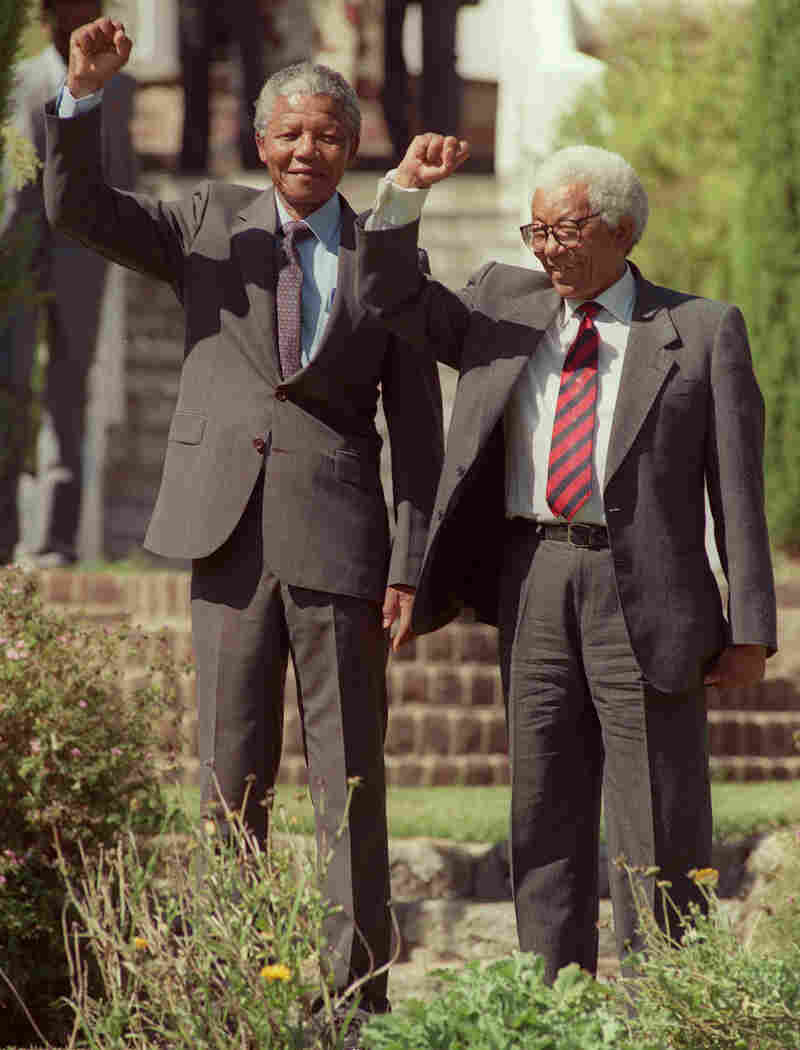 Nelson Mandela and Walter Sisulu raise their fists in 1990, one day after Mandela was released from jail. Walter Dhladhla /AFP/Getty Images hide caption

By the time he died this week, Nelson Mandela was considered one of the few — perhaps the only — giants on the world stage.

But the man who was prisoner 466/64 on Robben Island was a giant among heroes who offered their lives for freedom as valiantly as he did. In a way, the acclaim the world now heaps so justly on Nelson Mandela commemorates them, too.

There was Walter Sisulu, who first recruited Nelson Mandela to the African National Congress, and formed the ANC Youth League with him in 1944. He was arrested many times, and spent years living underground before they were arrested and stood trial in 1964. When a prosecutor told the court the defendants did not represent the real South Africa, Mr. Sisulu replied, "Why doesn't the government put the matter to the test by having elections in which everyone could vote?"

They had no answer.

There is Ahmed Kathrada, who also stood in the dock with Nelson Mandela and cracked rocks with him on Robben Island. He was inmate 468/64. After their release, Mr. Kathrada wrote a great memoir, called A Simple Freedom, in which he said that a prisoner can look through his cell window and choose to see either bars or stars.

There's Steven Biko, a fierce, funny and eloquent former medical student who led the Black Consciousness movement. In the 1970s, while Nelson Mandela and other ANC leaders languished in prison, Mr. Biko seemed to many exactly what South Africa's racist regime feared he would be: the next generation in the struggle against apartheid.

He was banned in 1973, and arrested outright in 1977, thrown into a prison cell in Port Elizabeth, stripped and chained. Police said, unconvincingly, that he struck his own head. So they put him naked into the back of a police van and drove him 750 miles to Pretoria, where he died of his wounds.

There are so many names to memorialize, they are difficult to remember. There were the men, women and children who died at the Sharpeville Massacre in 1960 when police fired into a crowd protesting the law of South Africa's apartheid, and those who died in the Soweto shootings of 1976. And there were thousands of township kids who marched peacefully and boldly into police bludgeons. Each sacrifice helped tip South Africa toward justice. In many ways, the victims of apartheid pardoned their country.

As Steven Biko said, "In time we shall be in a position to bestow on South Africa the greatest possible gift — a more human face."