Accessibility links
Other-Than-Honorable Discharge Burdens Like A Scarlet Letter Since 2001, more than 100,000 troops have left the military with an other-than-honorable discharge. The "bad paper" puts benefits and medical care out of reach, even for those who served in combat. Which raises a simple question: What does America owe those who serve? 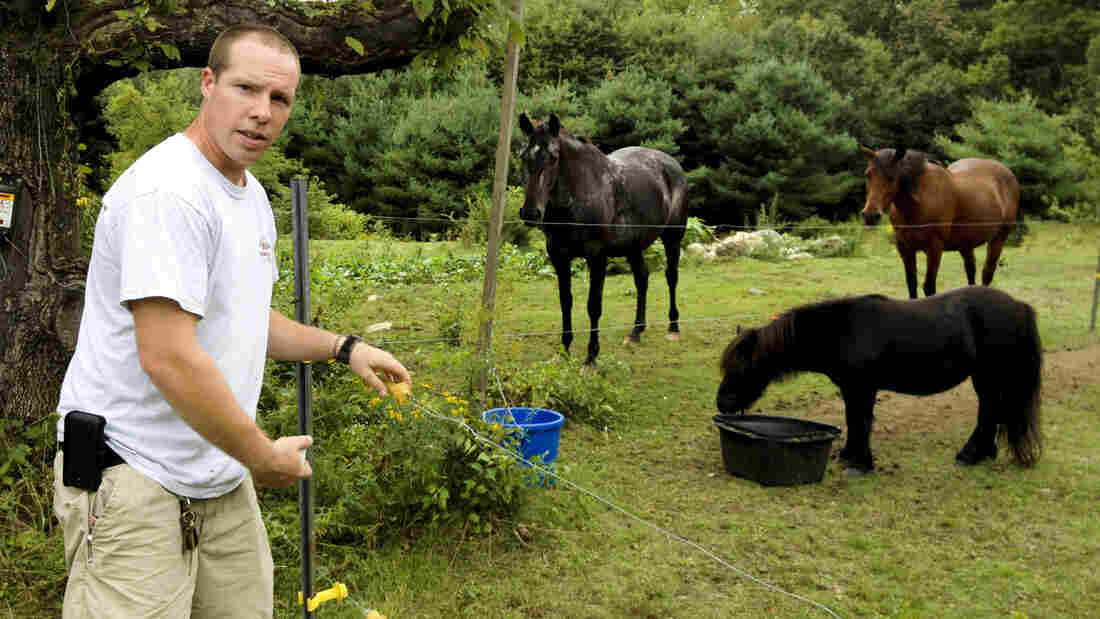 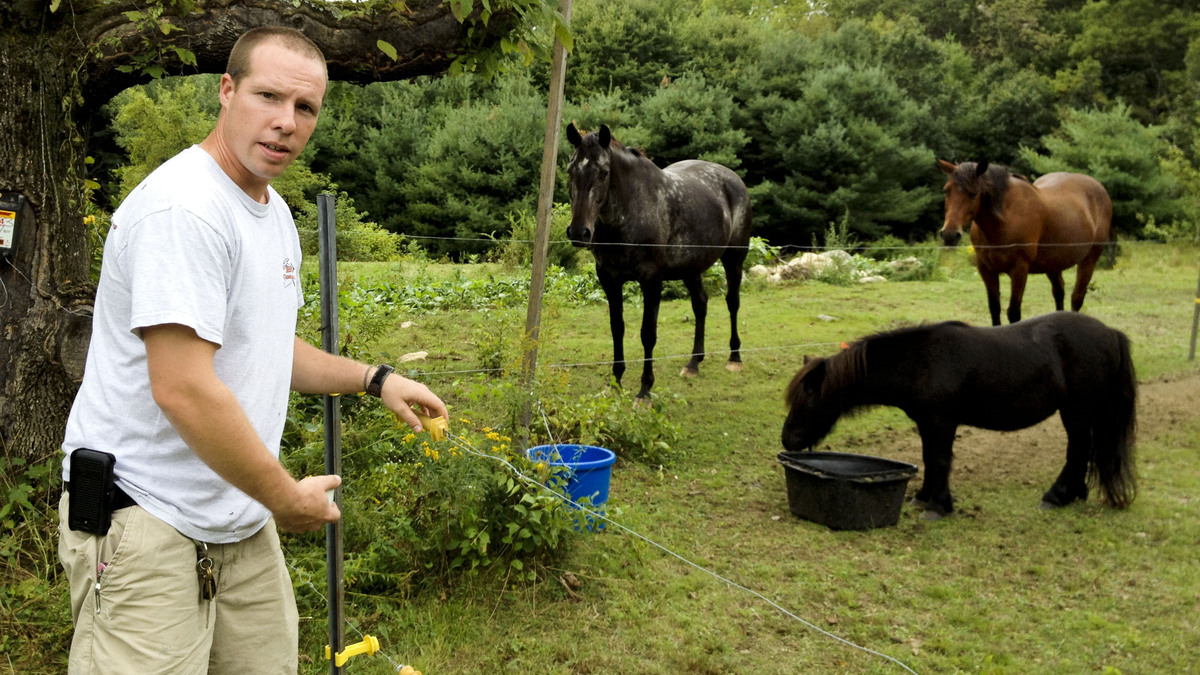 Reed Holway spent 13 months in Iraq. He says PTSD brought on a drinking problem when he returned to the States — and that eventually led to a bad-conduct discharge. Vets with "bad paper" have trouble getting any VA health benefits — even for PTSD.

Eric Highfill spent five years in the Navy, fixing airplanes for special operations forces. His discharge papers show an Iraq campaign medal and an Afghanistan campaign medal, a good-conduct medal, and that he's a marksman with a pistol and sharpshooter with a rifle.

None of that matters, because at the bottom of the page it reads "Discharged: under other than honorable conditions."

They want nothing to do with you. They won't give you a job, they won't take care of you, they don't want to help you out.

Highfill, a 27-year-old Michigan native, says he got addicted to the painkillers he was taking for a knee injury. In the Navy's eyes, Highfill screwed up. He got a DUI, among other things, and so it kicked him out. And that means when he went to a Department of Veterans Affairs medical center, it did the same.

"I went down to the Battle Creek [Mich.] VA and I spoke with the receptionist. She looked at my discharge and said, 'Well, you have a bad discharge. ... Congress does not recognize you as a veteran.' And they turned me away," Highfill says.

Highfill and more than 100,000 other troops left the armed services with "bad paper" over the past decade of war. Many went to war, saw combat, even earned medals before they broke the rules of military discipline or in some cases committed serious crimes. The bad discharge means no VA assistance, no disability compensation, no GI Bill, and it's a red flag on any job application. Most veterans service organizations don't welcome bad paper vets, and even many private sector jobs programs for vets accept honorable discharge only.

"They want nothing to do with you," Highfill says. "They won't give you a job, they won't take care of you, they don't want to help you out. The jobs I get are usually hard, hard-labor jobs."

The VA confirmed Highfill's visit and said he was offered information on how to appeal his status. The VA can do its own independent evaluation of a veteran's character of service before rejecting or accepting a vet with a bad discharge. Highfill's story is consistent with dozens of other veterans who spoke to NPR.

Many veterans with bad paper argue that their conduct was the result of post-traumatic stress disorder or traumatic brain injury. That's what Army veteran Reed Holway says led to his bad-conduct discharge.

Holway, 29, went to Iraq in 2005 for a 13-month tour, as the insurgency was ramping up. Something was always exploding. Early in his tour he watched a mortar drop into a building on base right in front of him.

"I heard a deep thud that kinda turned my gut inside out. I turned around and just as I did I saw what looked like a football coming out of the sky and ... blowing [a] building to smithereens," Holway says. "I was close enough to it that the drink in my cargo pocket had broken and I thought I'd urinated in my pants."

After a fellow soldier died, Holway had trouble sleeping; the clinic on base proscribed him Prozac and Ambien. His post-deployment medical screening showed depression and violent, even suicidal thoughts. It didn't get better back in the States. Holway was assigned to Fort Riley, Kan., but he started drinking heavily.

Months before he would have finished his enlistment, Holway had a breakdown while he was baby-sitting his girlfriend's child.

"I was on a bender and I couldn't handle the baby screaming," he says. "It did something to me inside that made me want to die. ... And I couldn't channel these feelings. And the screaming, it got to a point where, I don't know why, but I struck the child. Something went through my head like, 'I really shouldn't do this.' "

The blows left a mark, and Holway soon found himself before a court-martial. He did time for the assault and then went home to New Hampshire with a bad-conduct discharge. His father says the Army sent home an entirely different person from the young man who enlisted.

"I gave them a fine human being and they gave me back a damaged boy, with no concern about what they'd done," says Bill Holway, Reed's father.

"That's what I got back, and it's taken us years to get him back to where he is right now," he says. "I think that if you go over there and you put your life on the line, and you're hurt, there ought to be a compensation for that."

Holway counts himself lucky that he can work for his father, a building contractor in New Hampshire. His discharge makes it hard to find another job. With no VA health care, he's paying out of pocket for treatment of PTSD, which a civilian doctor diagnosed.

Cases like this present a dilemma, says retired Gen. Peter Chiarelli, former vice chief of the Army. He says there's no perfect way to diagnose PTSD or TBI.

"We want to be able to determine whether a person demonstrating certain behavior, whether that's due to trauma of war or whether it is due to a person just not doing their job and not being a good soldier sailor, airman or Marine," he says.

Chiarelli said commanders agonize over the decision to pursue a bad discharge.

"It's an extremely difficult decision to make," he says. "Someone has gone to war with you, has served [and] comes back and starts getting into trouble. I would argue that 99.9 percent of commanders err on the side of the soldier, but folks take advantage of system," he says.

The Pentagon provided data on less-than-honorable discharges for this story but declined a request for an interview.

For some veterans with bad paper, it's worse than if they never served, says Phil Carter, an Iraq vet now at the Center for a New American Security.

"The nation's long had a social contract with its troops that says we will send you to war, and when you come home we will care for you," Carter says. "There's been this gap; this population that's gone to war and earned the benefits of that social contract, but for whatever reason had these benefits taken away."

Carter says vets who fall into that gap show up in high numbers among the homeless, drug and alcohol abusers and those with untreated PTSD. He says the longer they're left without help, the higher the cost to society.